The Rad Power Bikes RadRover 6 Plus is a Class 2 fat tire electric bike that’s designed for paved and unpaved joyrides and commutes. The RadRover 6 has enough power to thrive in a town with steep hills and enough comfort to enjoy your evening cruise.

Looks aren’t everything though, so we conducted a hill climb test, brake test, circuit test and more to get familiar with the changes Rad’s made since the last time we reviewed a Rad Power Bikes model. By the end of this review you should have a good idea of how the bike performed and if the RadRover 6 is the right fat tire e-bike for you.

END_OF_DOCUMENT_TOKEN_TO_BE_REPLACED

An electric bike built to haul heavy loads over difficult terrain, the QuietKat Apex is a hardtail electric fat bike with a burly rear rack and a super powerful mid-drive motor.

The Apex is the highest-end of several hardtail electric fat bikes in QuietKat’s lineup. Spec’d with the Bafang Ultra mid-drive motor, an inverted moto-style front fork, powerful brakes and a 9-speed SRAM drivetrain, the Apex is a member of a newer niche of electric bikes I’ve started calling the “all-terrain” category. Electric Bike Report borrowed an Apex during the Big Gear Show in Park City, Utah earlier in August to get a feel for the bike.

Electric Bike Report’s home base is in a corner of Southwest Utah famous for four-wheeling, and every weekend our area is flooded with tricked-out Jeeps, side-by-sides and rock crawlers with huge tires and suspension burly enough to handle Utah’s famous red sandstone. The Apex reminds me of those vehicles. Its knobby fat tires lend a considerable amount of grip and the stouter-than-average front fork feels more capable than the suspension we see on some other electric fat bikes. Pair those features with the torquey Bafang mid-drive, and you’ve got an all-terrain e-bike that’ll handle quite a bit. 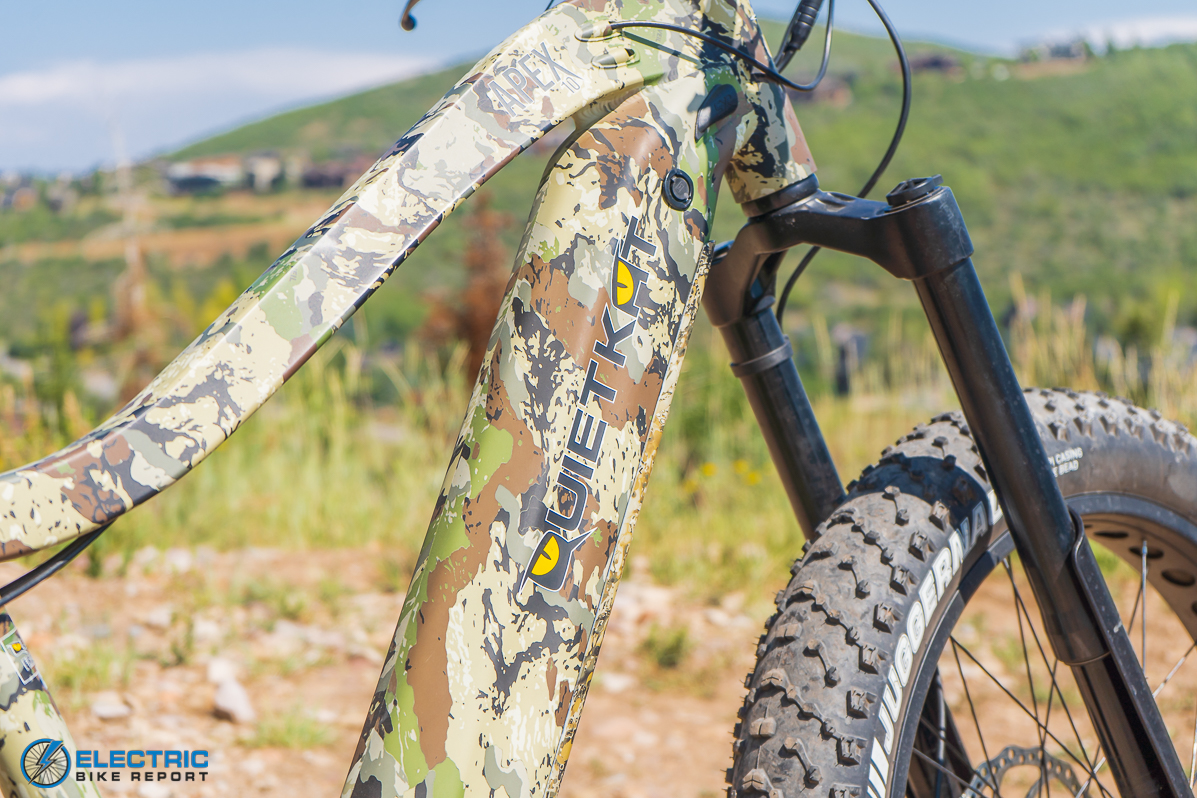 The QuietKat Apex we tested was decked with a camouflage paint job.

We had limited time on the Apex during the Big Gear Show and had little access to e-bike legal trails, but the bike’s above average off-road capabilities were obvious as soon as I pedaled the bike. While its a bit too much of a brute to fall squarely in the eMTB category and far too capable to simply be called an average electric fat bike, the QuietKat Apex — and other bikes like it — are carving out their own niche in the e-bike world that appeals to hunters, outdoorsmen, overlanders and really anyone looking to navigate troublesome terrain and discreetly haul gear to far-flung places.

END_OF_DOCUMENT_TOKEN_TO_BE_REPLACED

In this Blix Aveny Skyline review, we’ll test the mettle of this Dutch-style electric commuter bike, including how well it climbs hills, comes to a stop and even how far you can make it on a single battery charge. Re-released in 2021, the Aveny Skyline is the latest edition of the Aveny model that blurs the line between cruiser comfort and commuter efficiency.

END_OF_DOCUMENT_TOKEN_TO_BE_REPLACED

With a host of upgraded parts and a shiny new look, Rad Power Bikes’ flagship commuter bike looks all grown up.

In this Rad Power Bikes RadCity 5 Plus Step-Thru review, we take a look at how this freshly redesigned Dutch-inspired electric commuter performs in the real world. As the name suggests, this is the fifth iteration of the RadCity and this version got a serious facelift, a redesigned motor and battery and (finally) hydraulic disk brakes.

Rad is fast becoming one of the biggest and best funded e-bike companies around. Rad’s earned more than $300 million in investment in recent months — and they seem to be putting their money where their mouth is. This is one of two new models from Rad Power Bikes we’re reviewing since they got that funding (the other being the RadRover 6 Plus), and we’re expecting to see plenty more new ones on the horizon soon.

With a distinctly European styling and a 750W motor burly enough to appease power-hungry Americans, the RadCity 5 Plus Step-Thru is designed to work well in really any paved environment. It’s not the fastest e-bike we’ve reviewed (it wasn’t designed to be) but this new version has been specifically tuned for hill climbing, comfort and urban functionality.

Let’s see how it handles our tests.

END_OF_DOCUMENT_TOKEN_TO_BE_REPLACED

The Turbo Tero was released side-by-side with updated versions of the full-power Turbo Como and Turbo Vado commuter bikes, two staples of the brand’s electric commuter bike lineup. But the Tero is slightly different from the others; built on an eMTB chassis with knobby tires and a dropper post, the Tero is part eMTB part do-it-all utilitarian adventure bike.

We got a chance to visit with Emily Oppliger and Ash Puzey of the Specialized Turbo Tech team at Sea Otter for the low down on the new Tero 5.0, as well as a few other new things from the California-based bike brand. 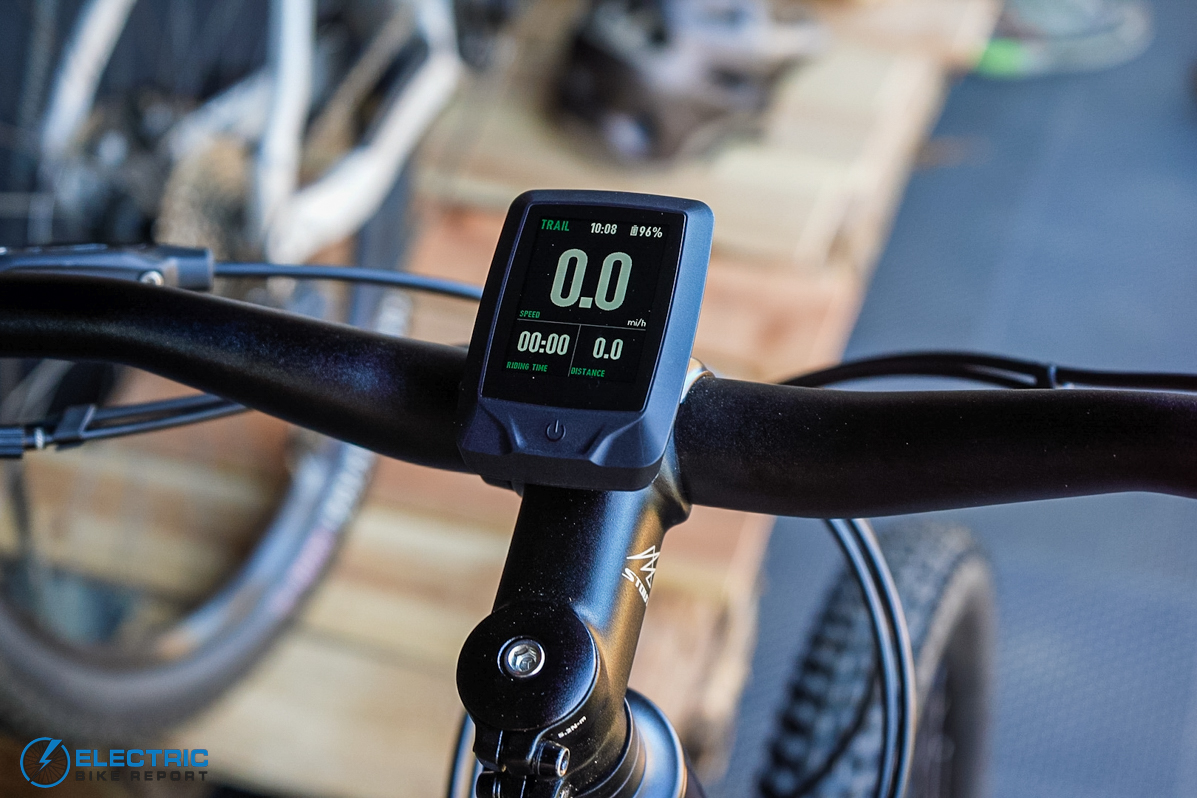 The new MasterMind display was front and center on the Tero 5.0.

END_OF_DOCUMENT_TOKEN_TO_BE_REPLACED

The TurboAnt Thunder T1 is a Class 3 electric fat bike that’s built for multiple terrains and rider heights. The T1 comes with a powerful 750W motor, 48V, 14Ah battery and five levels of pedal assist. The T1 also has wide handlebars and an adjustable stem that allows you to adjust the positioning how you prefer.

Between the fat tires and adjustable ride positioning, the Thunder T1 will meet the fun factor and comfort requirements people often look for in electric fat bikes. The T1’s design makes gravel roads seem not so gravelly and on road riding feel like a magic carpet.

During the Thunder T1 review we discovered a couple things the Thunder T1 does different from other fat tire e-bikes. By the end of the review you should have a good idea if the T1 is the right electric fat bike for you,

END_OF_DOCUMENT_TOKEN_TO_BE_REPLACED

The Espin Nesta is a foldable all-terrain Class 3 electric bike from Espin that feels very stable and well put together, especially for having the ability to fold. I couldn’t tell this was a foldable bike with how sturdy and stable it felt below me and it left me without question Espin did a good job designing the Nesta.

The Espin Nesta review reminded us how not all foldable bikes are created equally. While we kind of knew that, being the electric bike experts we are, it was good to be reassured by its high speeds, comfortable positioning and hydraulic disc brakes. With its unique frame shape and ample rack space, the Espin Nesta is a member of the utility category of e-bikes — a class that’s growing in popularity among those who want a solid do-it-all electric bike.

We found a lot of things we liked about the Nesta right away — out of the box it comes 95% assembled and once we were riding we couldn’t help but notice the motor’s quick acceleration and 100mm of front suspension doing its thing.

By the end of this e-bike review you should have a good understanding of how the Espin Nesta performs out in the real world. From its battery range to its hill climbing ability we put “the Nesta to the test…a”. Let’s dive in.

END_OF_DOCUMENT_TOKEN_TO_BE_REPLACED

What’s painted British racing green, folds in half and rides with all the enthusiasm and excitement of a peppy little go kart? The Blix Vika+ Flex electric folding bike does.

In this Blix Vika+ Flex review, Electric Bike Report takes an in-depth look at the Santa Cruz-based electric bike company’s electric folding bike by putting it through a gauntlet of tests. Those tests — including a hill test, range test and many more — are designed to demonstrate how well this bike performs in the real world so that you can make a better informed choice on if this is the right bike for you.

The Blix Vika+ Flex is a through-and-through electric folding bike designed for urban commuting and riders who need a compact, stowable and efficient mode of transportation. Blix recently updated the Vika in July of this year, so the version in this review is the most recent iteration of the bike with wider tires and a redesigned folding mechanism.

It’s an incredibly pleasant riding e-bike with quick handling, a surprisingly peppy 500W rear hub motor and an overall nicely done finish. And with a claimed weight of 55 lbs, it’s respectably light — an important factor for an e-bike designed to be folded up and stored in tight spaces.

END_OF_DOCUMENT_TOKEN_TO_BE_REPLACED

The Beach Bum 2 is a Class 2 cruiser style electric bike from Tower. The Beach Bum comes with hydraulic disc brakes, a 500W motor and a comfortable riding position. This bike has enough power to make hills seem not so steep and enough comfort for longer leisure based rides.

When we reviewed the Tower Beach Bum 2 we noticed it was lighter weight than a lot of other bikes with 500W motors that we have tested recently. Its lightweight design allows it to handle and feel similar to a standard beach cruiser.

If you’re looking for a budget friendly cruise-specific electric bike then the Tower Beach Bum 2 is one to look into. Its 7-gear range will allow you to sit back and relax while the motor and battery ensure the ride stays easy and fun.

By the end of our Tower Beach Bum 2 review you should have a good idea of the bike’s performance, who it’s for and what our overall opinion of the bike is. Let’s dive in.