With Class 3 speed, a step-through frame and a host of new features for this model year, the 2022 version of the Euphree City Robin is a remarkably comfortable and quick electric commuter bike.

In this Euphree City Robin review, we test the new iteration of Euphree’s flagship commuter in the real world — getting a feel for how it performs on hills, how long the battery will last and how the bike rides.

Built around a Class 3 500W motor and 672Wh battery, the City Robin is no slouch when it comes to power. But with its step-through design and upright riding position, that power is paired with very comfortable and predictable handling that’s approachable for all levels of rider.

Though some companies choose to entirely revamp a bike for new model years, Euphree took a lighter touch with their 2022 City Robin. A number of small changes for this year have had a big impact on how the bike feels.

The Euphree City Robin is billed as a commuter bike, but it’s built in a way where the bike could also double as a laid-back cruiser bike.

It’s got a 500W rear hub motor capable of Class 3 speeds and a stout rear rack that’s now welded to the frame, which gives the bike a really solid 100 lb carrying capacity — features that all lend themselves to the commuter category; but it’s also a step through frame with slightly swept handlebars, a comfortable seat and a nice upright geometry — all things that lend themselves to a cruiser bike.

Euphree has done a good job of blending the cruiser and commuter worlds in my opinion. They are two categories that can be complimentary if done well and this bike seems to do it well.

As I mentioned before, the City Robin is built around a 500W rear hub motor that makes 80Nm of torque and a 48V, 18Ah (864Wh) battery that’s integrated into the frame, which is the same powerplant that drove the previous version of this bike.

It also comes stock with a 100 mm fork in the front and a SR Suntour NCX suspension seatpost that jointly help take the edge off bumpy pavement — also features we saw on the previous version.

But that’s where the spec sheets of this bike and the previous bike begin to look different. Though Euphree didn’t do a ground-up redesign of the City Robin for 2022, they did spend a considerable amount of time tweaking the bike based on customer feedback.

For starters, they’ve given the bike a 7-Speed Mezzu drivetrain from MicroShift and changed the brakes to Tektro HD E350 hydraulic disk brakes.

There is also a new Kenda tire that’s knobbier and friendlier on more variable terrain, brighter lights, metal fenders, water bottle bosses and, as I mentioned before, they’ve welded the rear rack to the frame for greater carrying capacity.

Even as we were reviewing this exact bike Euphree was honing in on their design. We were sent a new display that now sits off to the side instead of directly in the center of the handlebars and they added a small bash guard that protects the rear derailleur.

Lastly, and I’ll go into a little more detail on this later, Euphree gave the 2022 version of the bike a slightly toned-down programming. In the first iteration of the bike, customers could actually choose between a higher power program and a more mellow program at purchase, and Euphree found that most customers seemed to prefer the mellower setting, so that’s what comes stock on this version of the bike.

I think one of the most important things to take note of when thinking about these changes is how closely Euphree listened to their customer base when altering their bike’s design. It may seem like a simple and maybe even obvious thing to do, but I’ve seen few e-bike brands listen to their customers the way Euphree does. 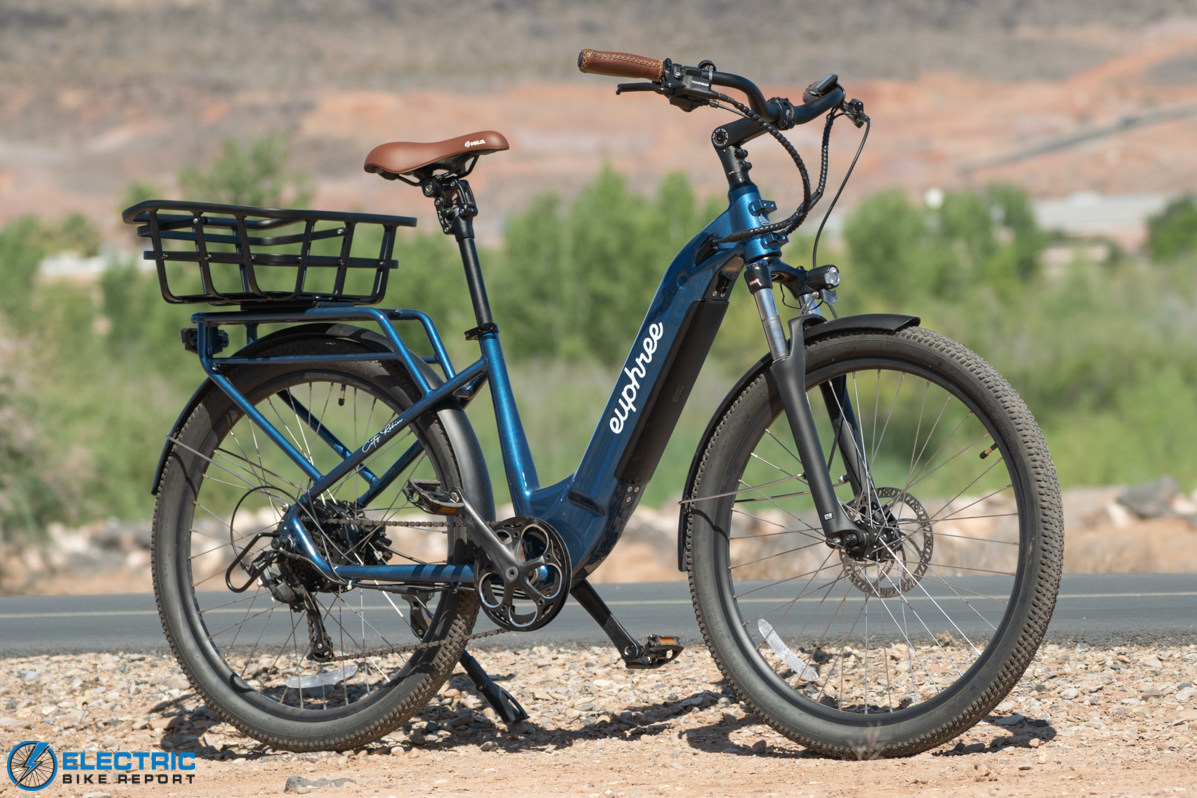 The 2022 Euphree City Robin didn’t get a ground-up redesign, but lots of small changes have led to a bike that feels distinctly different. 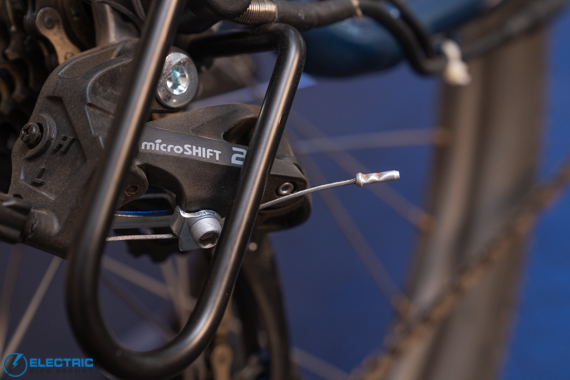 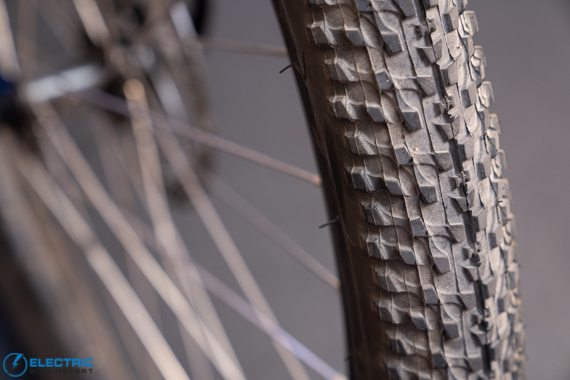 Knobbier tires from Kenda help with traction on variable terrain.

That motor is engaged via a cadence sensor that detects whether you’re pedaling or coasting. Cadence sensors work much like an on/off switch, so while you won’t necessarily be able to manipulate how much power you’re getting from the motor while pedaling, it is fairly responsive. In our testing we noticed very little lag in motor engagement, which isn’t always the case with this type of setup.

As we’ve mentioned a few times now, Euphree used to give customers the option between a mellower and more aggressive motor programming when they ordered a City Robin. But based on customer feedback, the 2022 version of the bike comes stock with the toned down version.

I’ve ridden City Robins with both power profiles, and the main differences I can feel are when accelerating from a stop and when really leaning on the motor up hills. The programming on the 2022 version of the bike is a little gentler and more predictable when starting from a stop, which I think suits this style of bike. This does sacrifice a little uphill ability, but the only place I noticed that was on our über steep test hill, which is far larger of a hill than what you’d typically find.

We did test the bike around our official test circuit to get a feel for the performance in each pedal assist level, and what we found was a very nice breakdown of power between the very gentle PAS 1 and very fast PAS 5. We also did a lap with no help from the motor and found the City Robin pedals nicely on its own, which will help with battery efficiency. 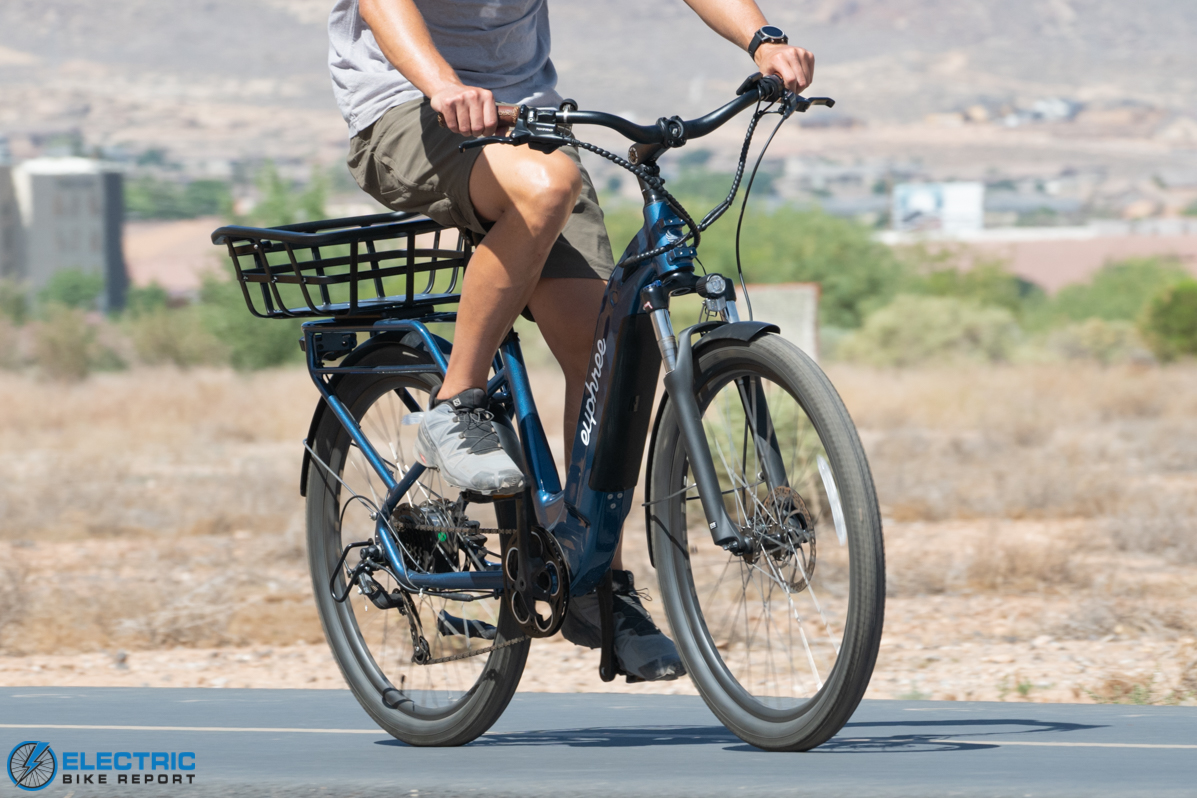 The City Robin is a Class 3 e-bike capable of up to 28 mph on pedal assistance and 20 mph using the throttle. 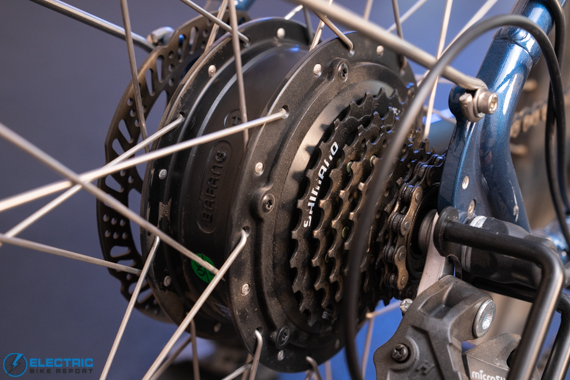 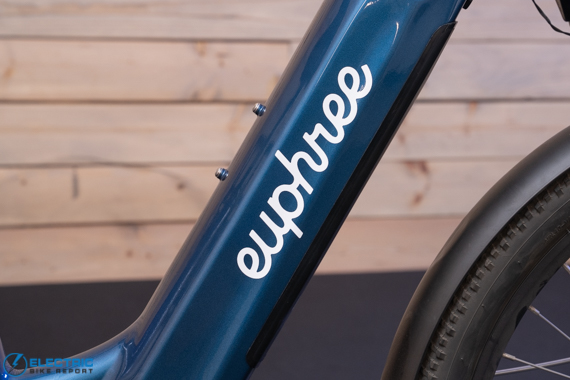 The 864Wh battery is tucked into the downtube of the frame.

Compared to other e-bikes of the same style and similar price, the Euphree City Robin’s 48V, 14Ah (674Wh) battery is a fairly standard size.

With standard size tires, a good pedaling position and a 500W hub motor that’s not as energy hungry as its larger counterparts, the City Robin’s battery does very, very well.

We conducted two range tests to gauge its performance — one in PAS 2 and another in PAS 5 — to get an idea of what sort of battery life you could expect when riding the bike conservatively versus riding with the power turned all the way up. In both situations we saw good results.

To test the Euphree City Robin’s climbing ability, we pitted the 500W-powered bike against our test hill Hell Hole, a one-thrid of a mile long steep that pitches over 12 percent.

We did two tests of the Euphree, once on throttle and once using pedal assist level five.

Like many of the other 500W rear hub motor e-bikes we’ve reviewed here at Electric Bike Report, the Euphree did not clear Hell Hole using just the throttle alone, but when you add in a little help from a rider’s legs on PAS 5 it went to the top in 1:22.00 with an average speed of 13.2 mph.

This is a good result from the Euphree and about what we expected. We chose Hell Hole as our test hill specifically because it’s steep enough and long enough to push bikes to their limit. For many e-bikes with 500W motors, that usually means they don’t quite make it to the top without a little help from the rider.

Hill climbing, according to Euphree, is also a department where we’re likely seeing the results of the decision to give the bike a mellower programming. Even before we conducted this test, Euphree predicted their bike probably wouldn’t make it on throttle alone but would in PAS 5 — a prediction that proved accurate.

There is talk, according to Euphree, that future models will allow users to adjust amperage, which would give the bike more kick uphill, but this version does not have that feature. 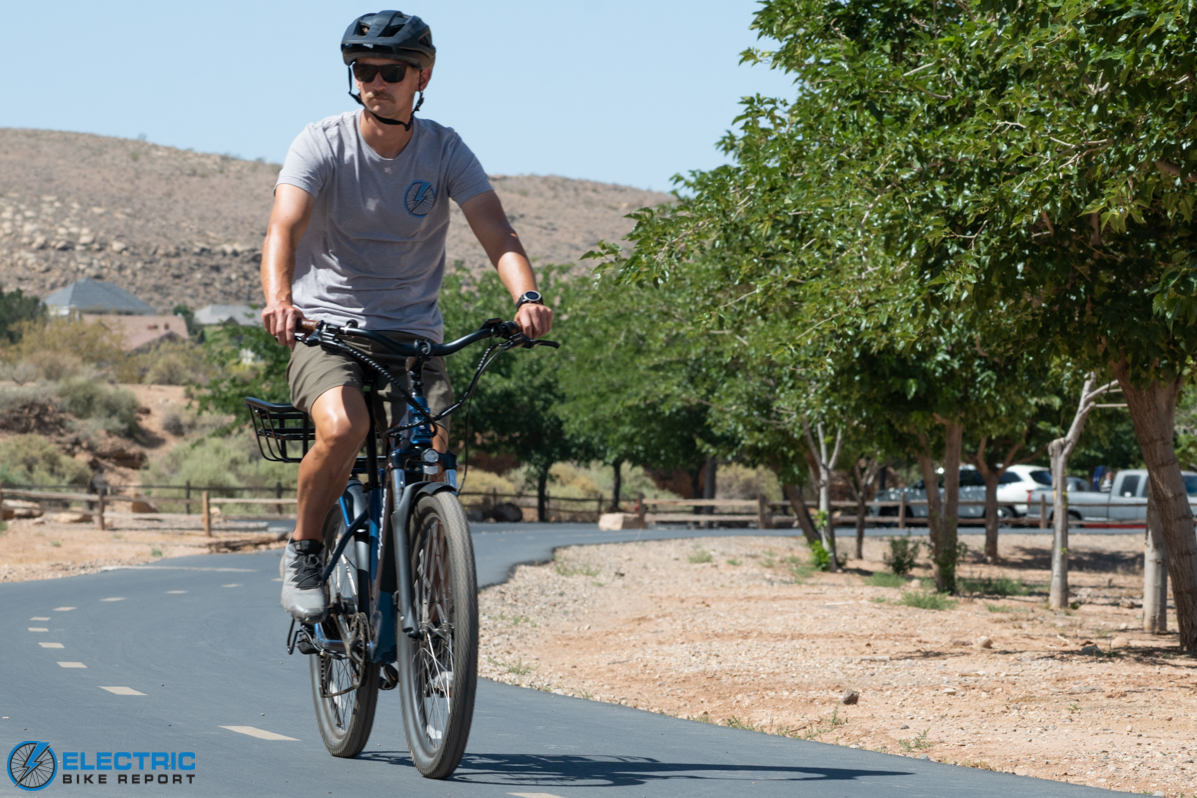 Flat ground is really where the Euphree’s 500W motor shines. 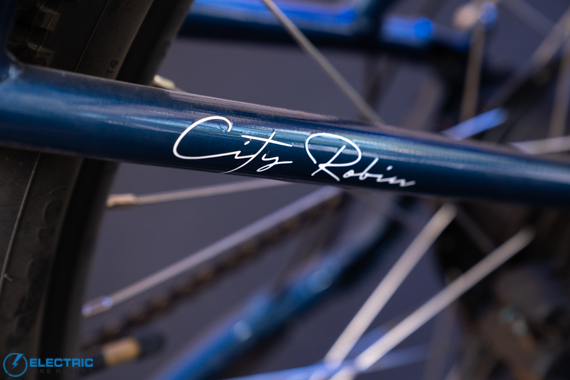 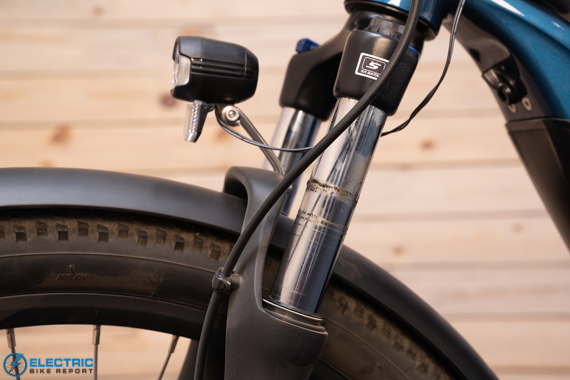 New for 2022 Euphree gave the City Robin a set of Tektro HD E350 hydraulic disk brakes, a name-brand upgrade over the brakes we tested on the previous model.

In our braking test, where we took the average distance of five full-power stops from 20 mph, the City Robin came to a stop in 12-feet 4-inches, which is considerably better than the 15-foot 8-inch overall average of all the bikes we’ve tested. It’s also a considerable improvement over the 2021 City Robin’s average stopping distance, which we measured at 17-feet 6-inches.

Aside from their stopping power, the Tektro brakes have the benefit of being a larger brand than some of the other affordable brake options available. This helps with their serviceability, as with a name brand brake there are better odds your local bike shop will be equipped to service them should an issue come up — a situation that shouldn’t be discounted, especially with hydraulic brakes.

Aside from its speed, the new rear rack and generally good looks, comfort appears to be a focal point for the 2022 City Robin.

Though it’s billed as a commuter, the bike’s step-thru frame and relaxed upright geometry bears a striking similarity to the ultra laid-back beach cruiser. This is helped by the 100mm front suspension fork and the SR Suntour NCX suspension seatpost.

I’m not always the biggest fan of suspension seatposts, as they sometimes have a pogo stick-like ride quality, but I think the Euphree is an excellent candidate for this type of post.

Like the ride quality, the City Robin’s handling is very laid back, predictable and feels stable on lots of different road surfaces. This bike is built primarily for use on pavement, but the addition of the knobbier Kenda tires does give the bike grip on more variable terrain — think the occasional gravel path or a dirt shoulder.

The City Robin used to come with a center-mounted LCD display but that’s been changed to a side-mounted LCD that’s situated on the left-hand side of the handlebars. It’s a color display, which is always nice, and I like that the power button and the buttons for selecting PAS level are integrated into the display’s housing. 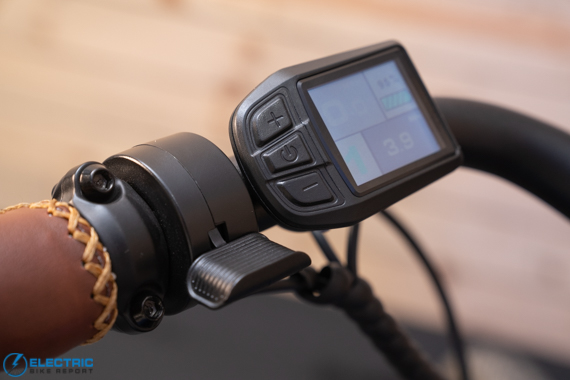 A new feature for 2022 is an offset display. It’s full-color, has built-in buttons and is very easy to use. 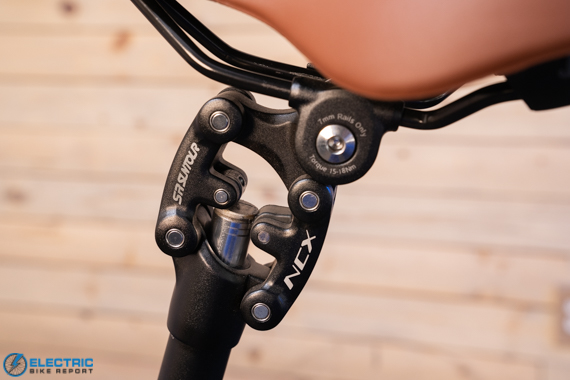 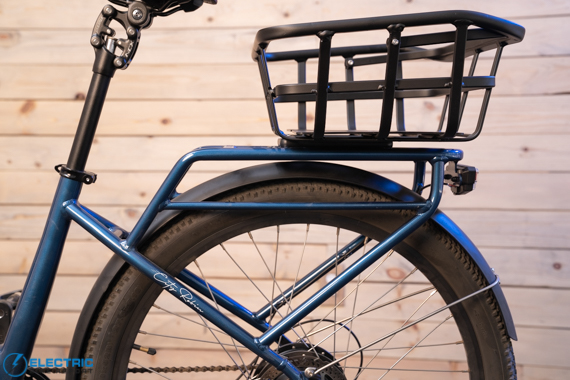 The rear rack is now welded on and can accommodate a number of accessories, including this quick-attach basket. 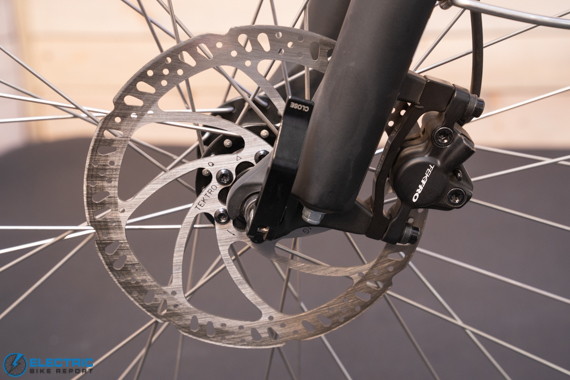 Overall I think the 2022 version of the Euphree City Robin is a fantastically comfortable, well-appointed and nicely performing electric commuter (or cruiser) bike that won’t cost an arm and a leg.

I think Euphree did a great job in designing a bike that toes the line between commuter and cruiser. Maybe more importantly — considering this is the 2022 edition of the bike — I think they did a great job of making a number of small changes that add up to a noticeable difference in how the bike rides. The 2021 City Robin was already a bike we loved, and the 2022 version only seems to build on that momentum.

This is going to be a great bike for someone who’s wanting to commute comfortably, explore paved bike paths or just wants a nice-looking jack of all trades e-bike.

The 2022 Euphree City Robin can be bought online and will be shipped directly to your door.

‘Happy Riding, make sure to let us know if you have any questions down in our comments section or if you think we left anything out in this review of the Euphree City Robin.