The type of drivetrain you choose for your electric bike will significantly influence how you ride your bike and how much you enjoy it.

There’s not a ton of drivetrain variations to choose from — really only three, which I’ll get into below — but the make and model of your drivetrain is an important choice, especially when buying an e-bike.

The first two categories I’ve listed above are probably familiar to most people reading this, so I won’t waste a bunch of page space explaining them. Instead, I’m going to jump right into internally geared hubs. 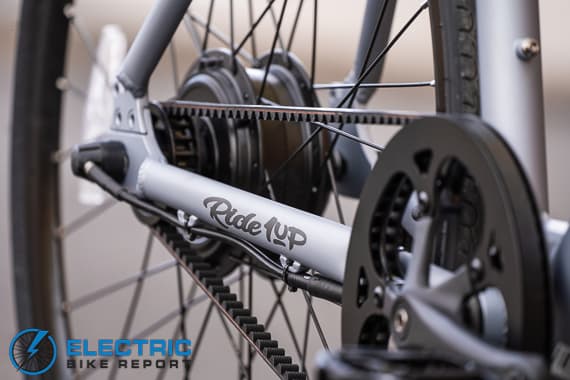 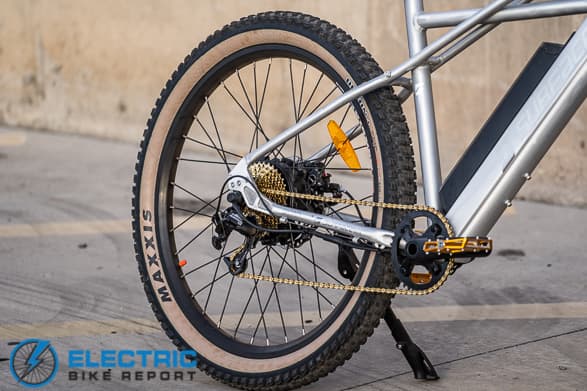 A traditional drivetrain found on a majority of bikes. 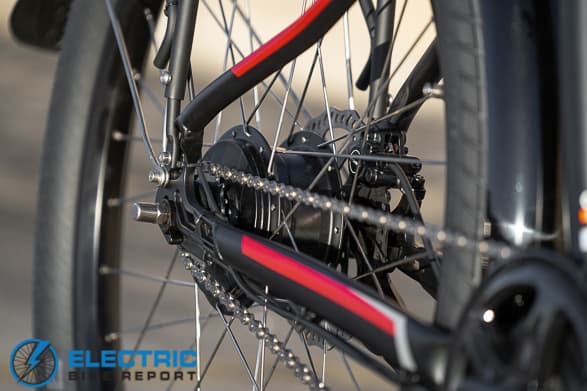 Planetary drive systems and bicycle transmissions: Why internally-geared hubs on electric bikes are having their moment

Outside of some specific cycling niches, the mainstream bike world largely viewed internally geared hubs as the oddball cousin of more traditional drivetrains.

Bicycle commuters who trudged through snow and rain liked them because all the important bits were sealed inside the hub shell, protected from the elements. And they had a cult following in the long-distance bike touring crowd who loved the fact that they require virtually no maintenance and you could get them to shift even when the drivetrain was under extraordinary load, perfect for pedaling fully-loaded touring rigs over mountain passes.

The inside of an internally geared hub’s oversized shell is a complex mess of gears that would make a Swiss watchmaker blush. How this all works is difficult to explain, and you don’t really need to know it in detail, so here’s the CliffsNotes version: That complex interlocking gear system inside the hub is made up of “planetary gears” that orbit a “sun gear,” which is fixed to the axle. As a rider pedals, power is transferred to the rear hub via a drive system that is effectively the same as a single speed drivetrain, with a sprocket at that cranks and a primary cog mounted on the rear wheel. But once the power gets to that rear cog, it passes through a complex transmission-like system of gears inside the hub before being translated to the rear wheel. As a rider shifts, different combinations of gears inside the hub engage to make for different gear ratios. These gears either amplify the force applied at the pedals to turn the wheel faster, or reduce it to turn the wheel slower.

Few in the mainstream cycling world, myself included, paid much attention to internally-geared hubs. That is, until e-bikes came along and shattered the definition of mainstream.

Suddenly, the market was flooded with cycling neophytes on the hunt for e-bikes they didn’t need to be experts to ride. They wanted something to ride to the store or work that requires little maintenance; little prior knowledge of good shifting technique (which is absolutely a thing); and something that would last a long time. 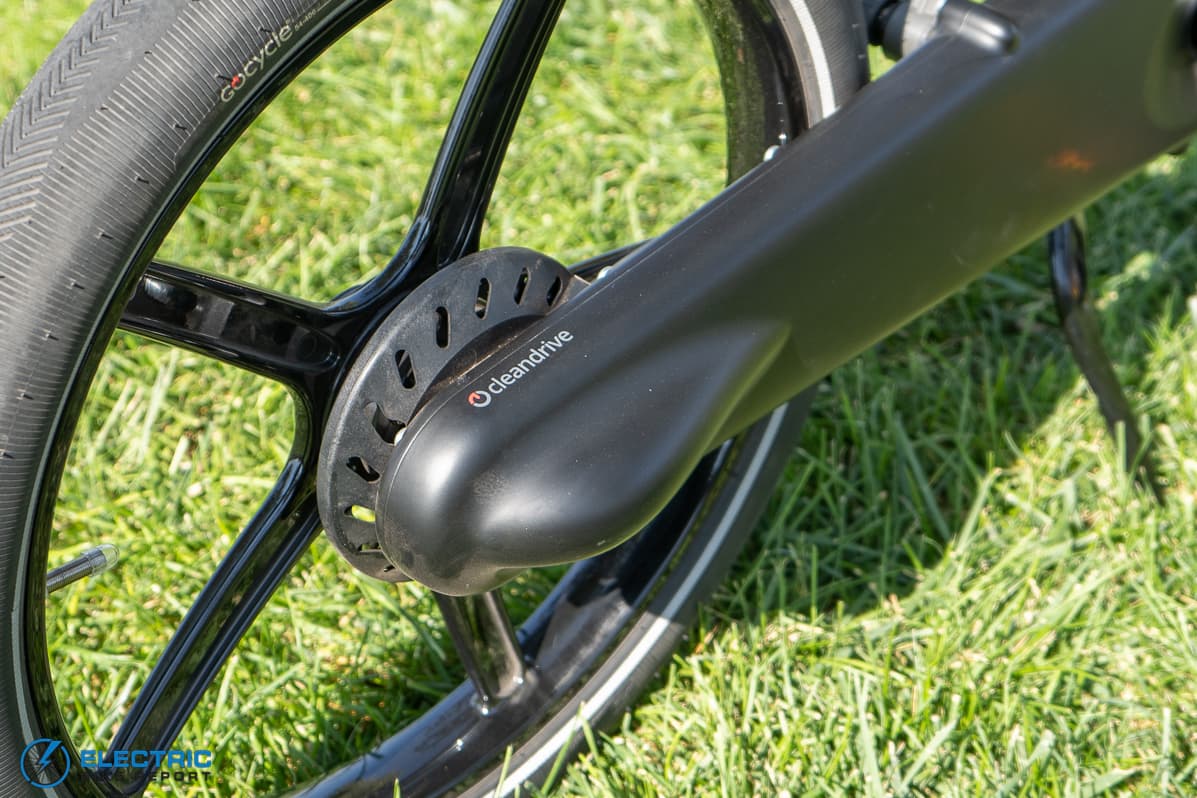 The e-bike also presented a new mechanical problem for traditional drivetrains: They produce a TON of force. Not only did the torquey motors threaten to stretch chains and wear out cassettes quicker, the lateral forces of shifting multiple gears at a time and “cross-chaining” became a much greater concern.

Internally geared hubs are a readymade solution to those two mechanical problems, as they wear slowly and shift under load exceptionally well. They’re also friendly to newbie cyclists, as you can easily shift while pedaling uphill, shift while stopped and there’s not much to mess up once they’re installed and properly tuned.

Consumers still don’t have a ton of brand options, as there’s only a few internally-geared hubs on the market today, but there’s still good choices for entry-level cyclists and experts alike.

Shimano makes the affordable and reliable Alfine and Nexus hubs, which we see come stock on a whole host of commuter, cruiser and cargo e-bikes. There’s also the English-made Sturmey Archer hubs, which are less common (at least in the U.S.). And for those with a more refined taste in internal hubs, German manufacturer Rohloff makes the 14 gear SPEEDHUB, a favorite for high-end e-bikes and long-distance tourers.

Enviolo (formerly known as Nuvinci) has its own unique take on the internally-geared hub with its stepless drive system. Instead of packing the hub full of gears, Enviolo uses a unique system that uses an interface of rotating balls and rings to create a continuously variable bicycle transmission. In effect, it’s the same idea as the geared systems above with the notable difference that there are no set gears to choose from — you just twist the shifter and the gear ratio adjusts accordingly. 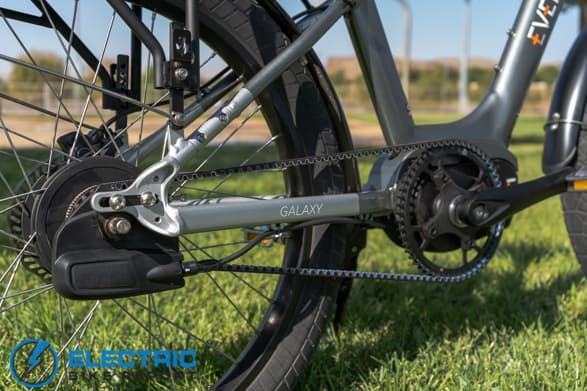 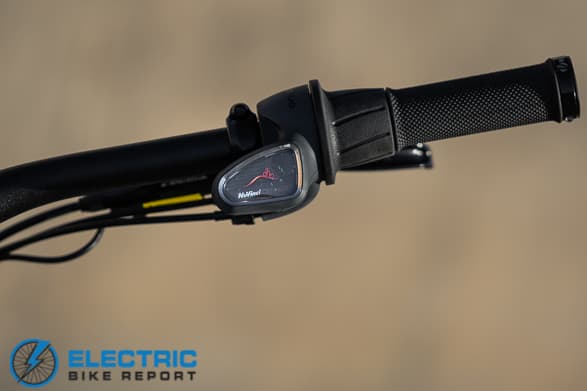 But while internally-geared hubs are certainly having a moment of relevance in the cycling world thanks to e-bikes, the traditional drivetrain still reigns king.

The Need For Stronger Drivetrains On E-bikes

Mainstream bicycle component manufacturers had a simple answer for the concern that an e-bike would wear out drivetrain components quicker: They just made everything stronger and refined how it shifts.

American component company SRAM really leaned into this idea when they released their EX1 eMTB drivetrain group in mid 2016. The EX1 cassette is machined from tool-hardened steel to last longer and the chain is bigger and beefier. SRAM has also limited the EX1 shifter to one shift at a time, as opposed to allowing a rider to dump multiple gears at once as is standard on their other shifters. SRAM claims this helps increase battery life and staves off component wear.

While the EX1 is the only dedicated e-bike drivetrain SRAM makes, the company has expanded its single-shift idea across nearly its entire offering of MTB shifters. Most shifters come in two versions: The normal shifter capable of executing multiple shifts at a time, and the e-bike version that only allows for one shift at a time. This allows eMTB riders to run a normal SRAM groupset while still getting some protection against increased wear.

SRAM takes a very a-la-carte approach to their drivetrains, and many of the different components can be easily mixed and matched. The company’s “Eagle” lineup of drivetrain components are all cross compatible.

Many other drivetrain manufacturers have implemented similar ideas into their e-bike groups, though much of the e-bike specific tech has been targeted at eMTBs. Shimano, who makes their own lineup of e-bike drive units, makes a stronger chain for e-bike use, though it’s cassettes and shifters appear to be the same. 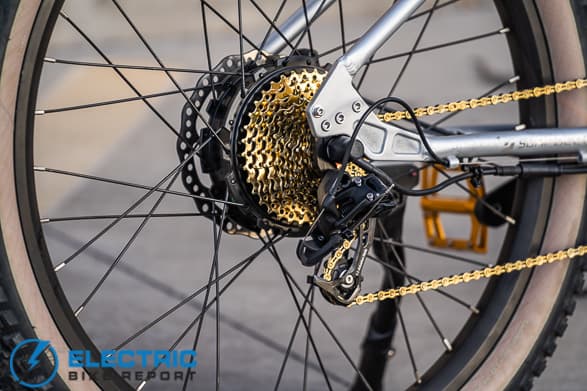 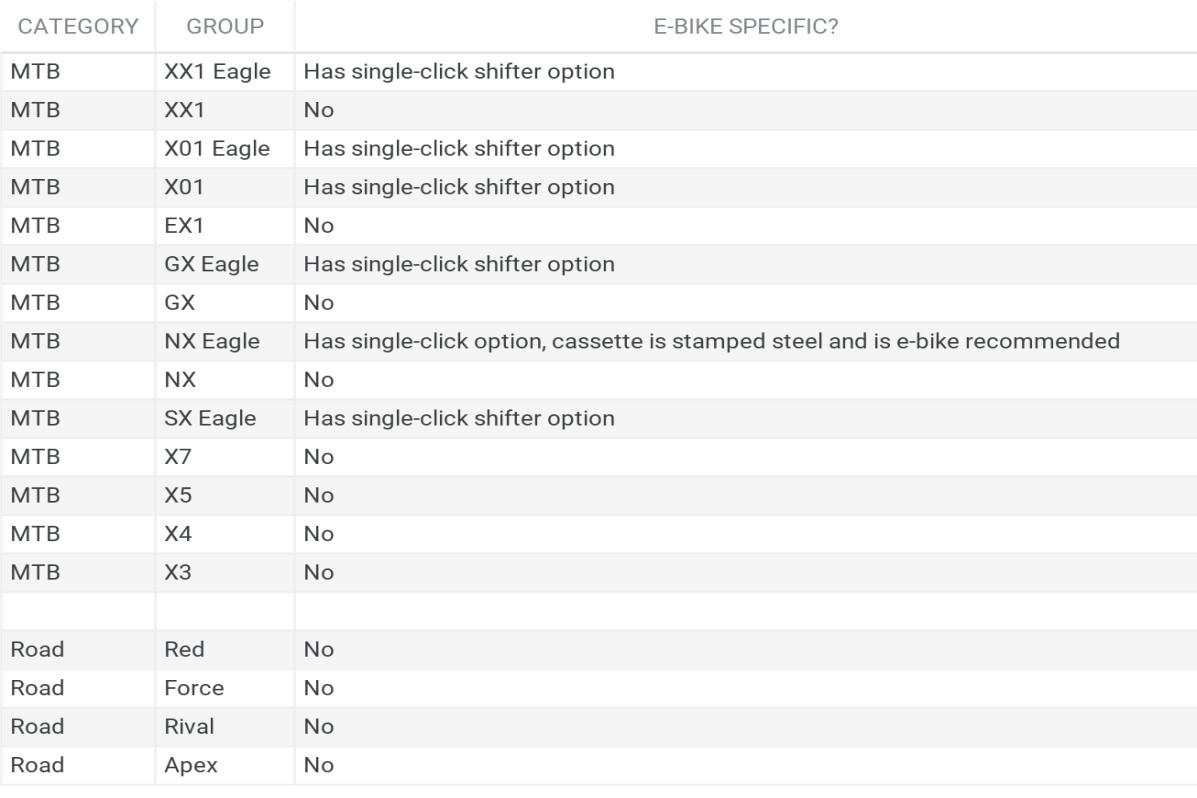 Even some smaller drivetrain makers like Box Components have created dedicated e-bike groups, though like SRAM, they’re more geared towards the performance eMTB crowd.

By and large though, most e-bikes we see with traditional drivetrains are spec’d with normal commuting and touring groupsets. Shimano’s Tourney, Altus and Acera groups are particularly popular and are a reliable choice for an average, casual rider looking for a bike with a traditional groupset. Go beyond that though, and it may be worth eyeing a more e-bike specific groupset — especially if you’re on a torquey eMTB. 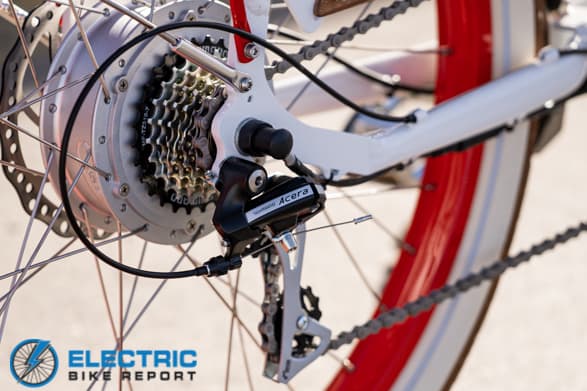 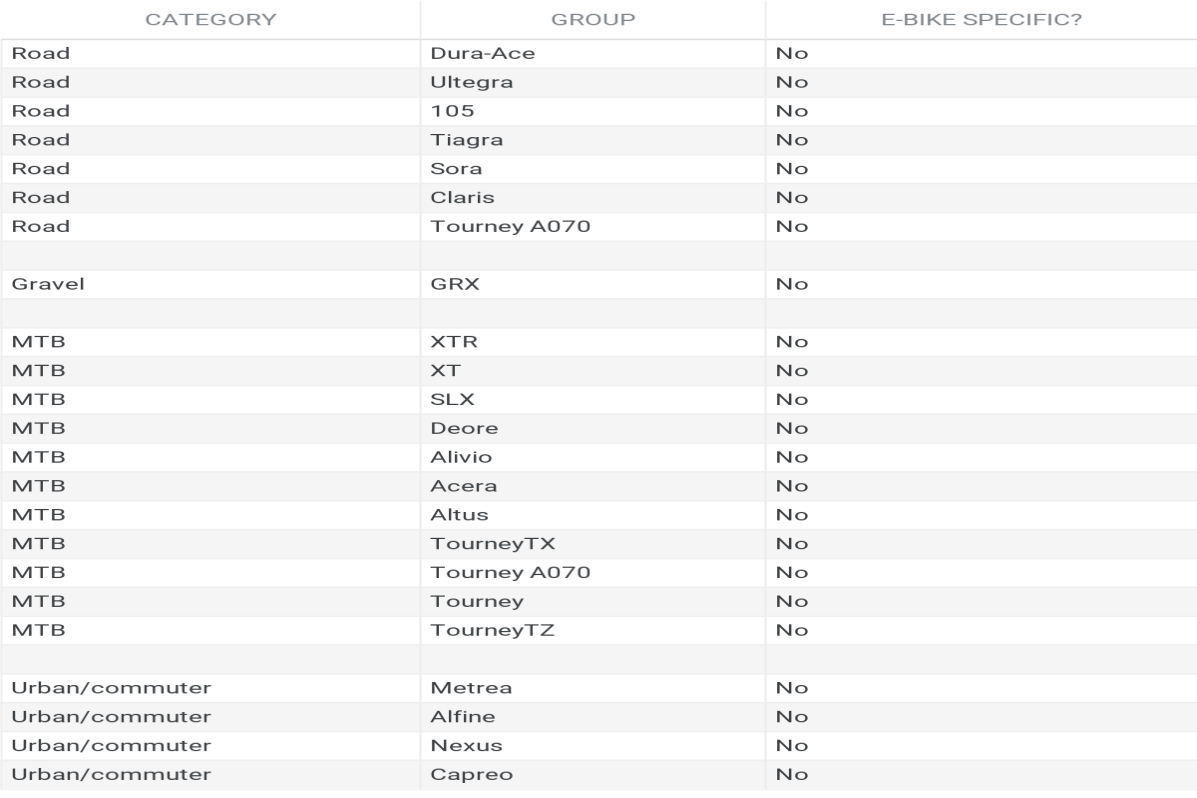 So which drivetrain should I choose for my e-bike?

There are loads of drivetrain options to choose from in the cycling world, which can make for some overwhelming decision making if you’re not entirely sure of what you want.

Just like what I wrote in Electric Bike Report’s guide to buying your first e-bike, the answer to this simple question is what should guide you through the process of choosing: What do you want to do with the bike?

If you’re a person who hasn’t ridden a bike in years and doesn’t want to think about shifting too much, an internally geared hub may be the right choice for you. We’ve found these to be super user-friendly and forgiving since you can shift while stopped and shift under load. They also have an added benefit of requiring virtually no maintenance, while their more traditional brethren need to be lubed and cleaned frequently.

On the other hand, riders familiar with a traditional bicycle drivetrain may want to head that direction instead. Most of our testers are experienced bike riders, and in nearly every instance we gravitate towards e-bikes equipped with a sprocket, chain and cassette drivetrain. For me, the ride feels a little sportier and a bit more reliant on my input (in a good way). The only downside is they require regular maintenance to run properly.

On a budget? Single speed e-bikes are killer fun and are a great way to get your foot in the door without losing an arm and a leg. Don’t be phased by the lack of shifting (that’s what the motor is for), but know you will feel the hills more than a bike with gear options. The simplicity and user-friendliness of single speeds will always hold a special place in my heart, which is why one-gear e-bikes like the Rad Power Bikes RadMission1 are my go-to bike path cruisers. 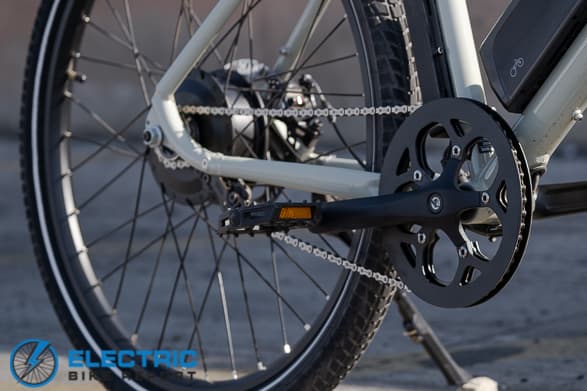 Whichever way you go, just remember that none of these systems are infallible and
will require occasional maintenance. Your local bike shop is your friend here. Get to know them, trust them and if things aren’t shifting right or sound strange, take your bike to them.