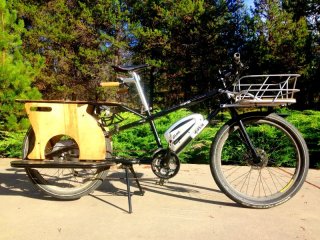 This is part one of a multi-part story: Why an electric cargo bike, and how do you build one of these?

Earlier in my life, I was a bicycle racer. From about the age of 10 until 30, most waking moments were spent trying to figure out how to go faster on a bicycle. That ended nearly 15 years ago. At that time, cargo bikes weren’t seen on the roads, let alone electric assist cargo bikes. So why now, in my mid 40’s, was I interested in such a machine?

For starters, I need to keep moving my body. With kids, jobs, hobbies, social lives and everything that goes with that, I don’t have the time – nor do I want to – ride a standard bicycle for the number of miles per week it takes me before I can start averaging 18+ mph on a ride. Unladen. That means, without carrying any extra weight on the bike. Adding to the problem, the extra pounds building up in my body. I am fortunate that the 60lbs extra I carry on my frame since the racing days came mostly from muscle (at least it seems that way?) – but it’s still extra weight that just slows me down on the bike.

Next, I love two wheels. Most cars do very little to excite me. I like the wind in my face, leaning into corners, holding handlebars and shifting gears. Riding a motorcycle to commute and run errands doesn’t burn many calories. Further, you’re restricted to ‘legal’ routes. Single track dirt trails? Cutting across schoolyards? Off limits on a moto.

Finally, if I was going to use a vehicle other than a car in daily life, it had to carry plenty of extra weight. Like, at least four full bags of groceries, and/or a child or two. Loaded thusly, I needed to cruise at 20mph without destroying myself. To summarize, I wanted to get exercise, be on two wheels, and cruise 20mph while carrying a couple hundred pounds of cargo. With these parameters, the answer always brings you back to the same category of vehicle: electric assist cargo bikes. 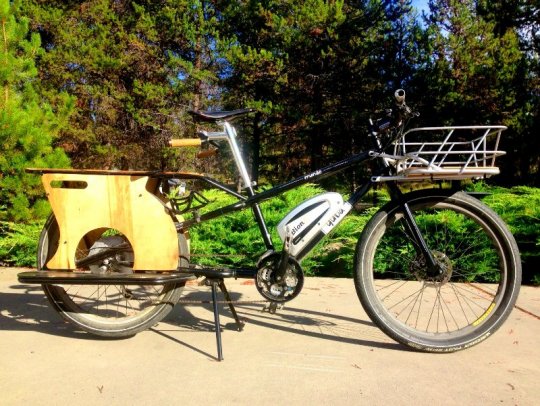 There are some great options in electric assist cargo bikes – and the category is growing. This may be the most exciting segment of the cycling industry, today. Still, I decided I did not want an off-the-rack bike. If this is a bike that I’m truly going to live with for the next year or more, it needs to be built differently. For the same reason you wouldn’t want a Chevy Suburban off the showroom floor if you thought you might do the Baja 500 in addition to taking the kids to soccer practice, I didn’t want a ‘standard’ build. Mainly, I wanted beefier wheels, brakes, and steering components.

For a chassis, I chose the Yuba Mundo. I had overlooked the one-size-fits-all Mundo initially because it seemed to be marketed squarely at urban parents making relatively short, easy commutes around the ‘hood. I was wrong. The harder I looked for a real pack mule of a bike, the more the Yuba Mundo kept coming up. When I saw one in person, I decided to go full in. The heavy-duty, ovalized steel tube construction sold me without even riding it. I’ve ridden enough bicycles in the last 35 years to gain a good grasp on bicycle design. As long as I could find the riding position I wanted, the Yuba Mundo was a design I could get into. 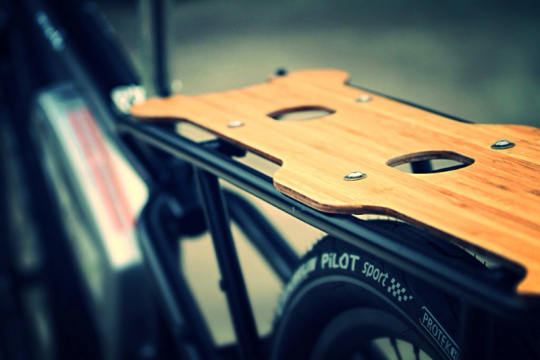 For me, that meant it’s a frame I envisioned could take me from home, carry kids to school, head to work with computers and extra clothes, and grab groceries on the way home. Even more, it needed to double as a side-business rig and a serious camping and adventure rig (more on all of that in later segments). I put my eggs in the Yuba Mundo basket.

Please note that you can buy a Yuba Mundo with a BionX kit already installed and ready to ride. 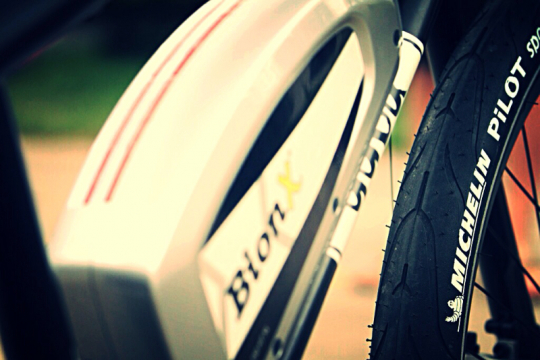 Pedaling a bike like this with only myself for power – with at least 200lbs of cargo – I would be lucky to average 13mph. That would be in ‘bike racer’ condition, and I wouldn’t want to do it every day. Adding electric assist  was the only way I could accomplish all of my goals on this project. I chose the BionX SL 350 HT DT XL. That’s a lot of acronyms that basically mean a 350 watt rear hub motor, powered by a 48v 8.8 amp hour battery. Overall weight for the kit is 16.1 lbs. Assist levels are 35, 75, 150 and 300%. I chose that battery option that mounts on the downtube of the frame. 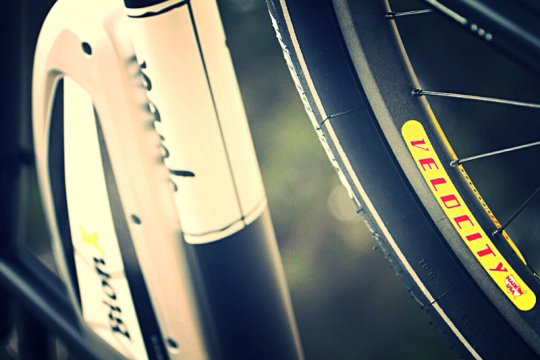 For rims, I went with the Velocity Cliffhanger with reflective coating. I’ve found Velocity rims to be among the absolute toughest available. I once rode one, without a tire on it, for an entire lap of a World Cup mountain bike race. There were large boulders on the course. My lap time was comparable to previous laps, and even though the rim was no longer usable, it was still true and round!  When I saw that Velocity had essentially this same rim with a reflective coating to be more visible at night, I got a pair. I laced the wheels up with DT Swiss spokes.

For brakes, I needed discs. As the guy who always says “V-brakes are all you need”, this was a different move for me. The thing is, when you’ve got kids as cargo – often more than one – why mess around? I chose Avid BB7’s. There are less expensive discs on the market that stop great, but few are as easy on the fingers as the Avid’s.

So with all this stop and go power, what was I going to trust the all-important contact patch to? I wanted a tire that was wide, had low rolling resistance, was made with electric-assist as part of the design process, was quiet, and also looked cool. I found all of those with the Michelin Pilot Sport folding tire in 26×2.3. The tread pattern on these Michelin’s is derived from Moto GP motorcycle tires. They look more like motorcycle tires than bicycle tires. 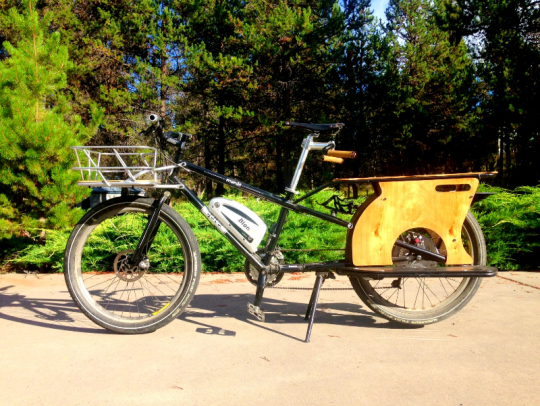 As I built the Yuba Mundo with BionX, spec’d out the way I wanted, my excitement grew. Standing on it’s extremely solid center stand (the Yuba kickstand is the burliest and best I’ve ever used on a bicycle – and that is very important on a bike like this), the bike began to ride in my imagination. What was this new chapter in cycling going to be like?

Strangely, when I spoke of this project to some of my ‘performance minded’ cycling friends, there was aversion. I realized many of them don’t understand what bikes like are for, or what they mean for the future. These are riders who have not yet grasped the concept of what riding a bike vs. a car or motorcycle really means. They may ride carbon racing bicycles for a hundred miles over mountains, but outside of that, the bike is not an option for them as a true utility vehicle.

That’s when I knew this project was more than just valid. In the next segment, I will go over the rest of the build, the initial rides and realizations of the Yuba Mundo/BionX build. I hope you will continue to follow along. For now, I will say the bike has truly brought me back to cycling. It has opened my mind to so many new possibilities, ways to use a bicycle. I haven’t been this thrilled about cycling in nearly 20 years.

Now, checkout the next part of this article about the Yuba Mundo / BionX e-cargo bike experience.