The electric bike world has plenty of sprinters, heavy lifters and high jumpers, but what about marathon runners?

There’s lots of options for long range electric bikes on the market today, from dual-battery eMTBs to sleek super commuters and everything in between. But, with batteries being the most expensive part of an e-bike, the question quickly changes from how far you’d like to go to how much money you’re willing to spend.

Herein lies the trick of long-range e-bikes: You’ve got to balance your distance needs with practicality and budget.

That balancing act is tougher than you might think, but armed with some basic information about a bike’s electrical specs, a little knowledge of your own pedaling abilities and (as always) a realistic grasp of what you’d like to do with the bike, you can confidently choose a long-distance e-bike that won’t cost an arm and a leg.

How To Calculate Distance on E-bikes

Humans ruin everything: Why our pedaling (or lack thereof) makes it tough to calculate e-bike range

This is the part that can get a little confusing if not downright frustrating, especially if you’re a new e-biker.

There is no way to know for sure exactly how far a particular bike, motor and battery setup will take you. You can make a pretty good educated guess, but unfortunately there’s a variable in the e-bike range equation that’s just too erratic and unpredictable to accurately measure.

That variable is you.

At the end of the day, e-bikes are still human-powered machines. Your pedaling — whether it’s just a little or a lot — will have an outsized effect on how far your e-bike will go. Considering each person is different, it’s enormously difficult to try and accurately capture how much the average person’s pedaling will help or hamper the bike’s performance. Which is why e-bike range is, at best, an educated guess.

Manufacturers take their best shot at accounting for the human variable when they calculate the range estimations they list for e-bikes, but know they’re using averages for rider weight, pedaling and the type of terrain. To the manufacturers’ credit, it’s not often we test bikes that dramatically overperform or underperform those published range estimations so they’re clearly doing something right.

But, for a more accurate picture about how a e-bike will perform specifically to you, I’m going to show you how the reviewers at Electric Bike Report estimate the range of e-bikes we test using some basic math, e-bike specs and a little information about ourselves. 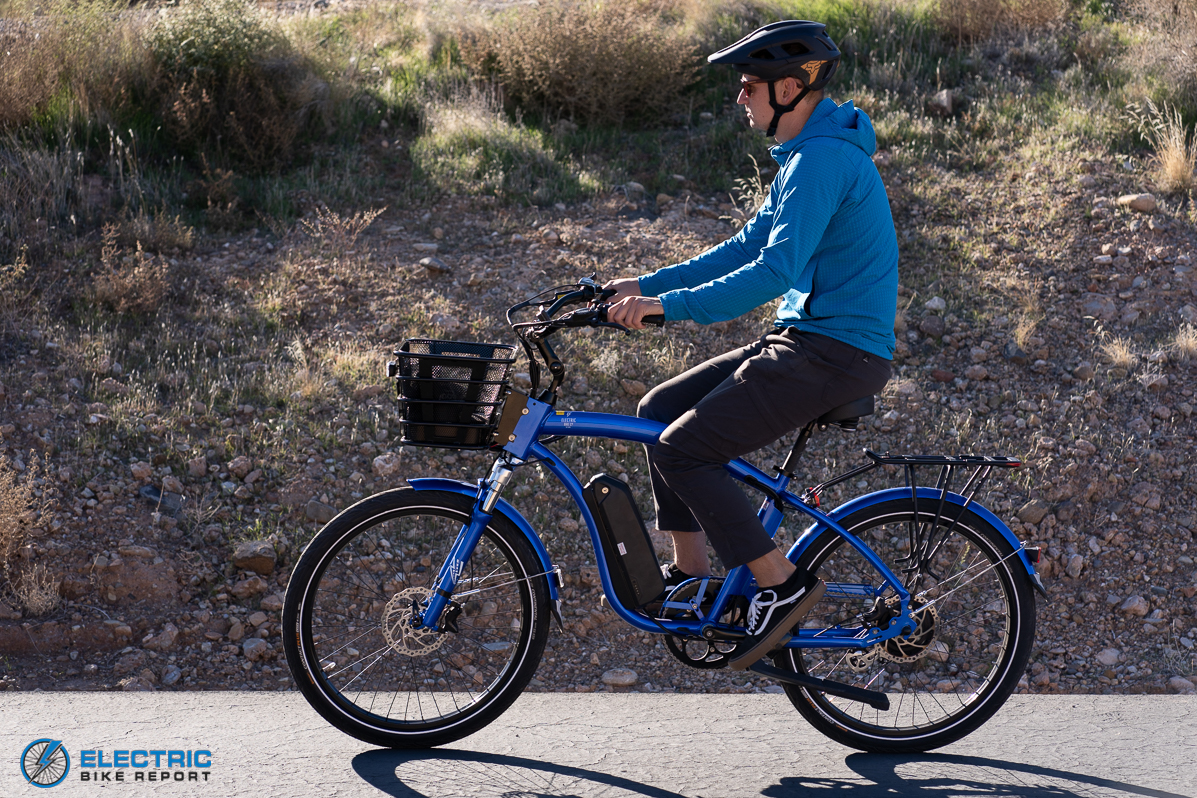 Napkin math: How many miles can you get on your electric bike?

The Electric Bike Report team often estimates range before embarking on our real-world range tests because we’d prefer to not get stuck far from home with a dead e-bike, and I’ve found success with the calculation I’ll detain below. It’s an imperfect method that takes a little e-bike know-how, but hopefully it helps you.

To illustrate this range estimation method, I’m going to use my own personal hunt for a long-range commuter e-bike as an example.

I live in a small-ish town called Hurricane (pronounced Hurkin — say it right you city-slickers) and commute by car to the Electric Bike Report offices in St. George, a round trip of about 40 miles every weekday. That’s a total of 200 miles a week in a car that I’d rather spend pedaling an e-bike.

Now that I know the distance I need to cover (40 miles plus some breathing room, so let’s round it up to 50), we arrive at step one in our hunt for the perfect long-range e-bike.

Step 1: What do you want this bike to do aside from going far?

This is the toughest part of the equation: Listing out what we want from the bike without being unreasonable. Below is an example of what I’m looking for in my future long-range commuter.

There’s some other things to consider here like weight, cargo capacity or budget concerns, but distance and average speed are the two most important for our purposes. Remember, be reasonable and utilitarian with your desired range. The further you want to go on a single charge, the more you’ll likely pay.

This is the fun part.

Long-range e-bikes are typically marketed as such, so I’d suggest you start with some good Google searches or visits to your local bike shop. This is also where you want to consider other factors like the type of long range e-bike you want and other features.

Again, here’s what my criteria are:

Use your criteria to choose a short list of your favorite long-range contenders. Don’t make it too long, because the next part requires math. 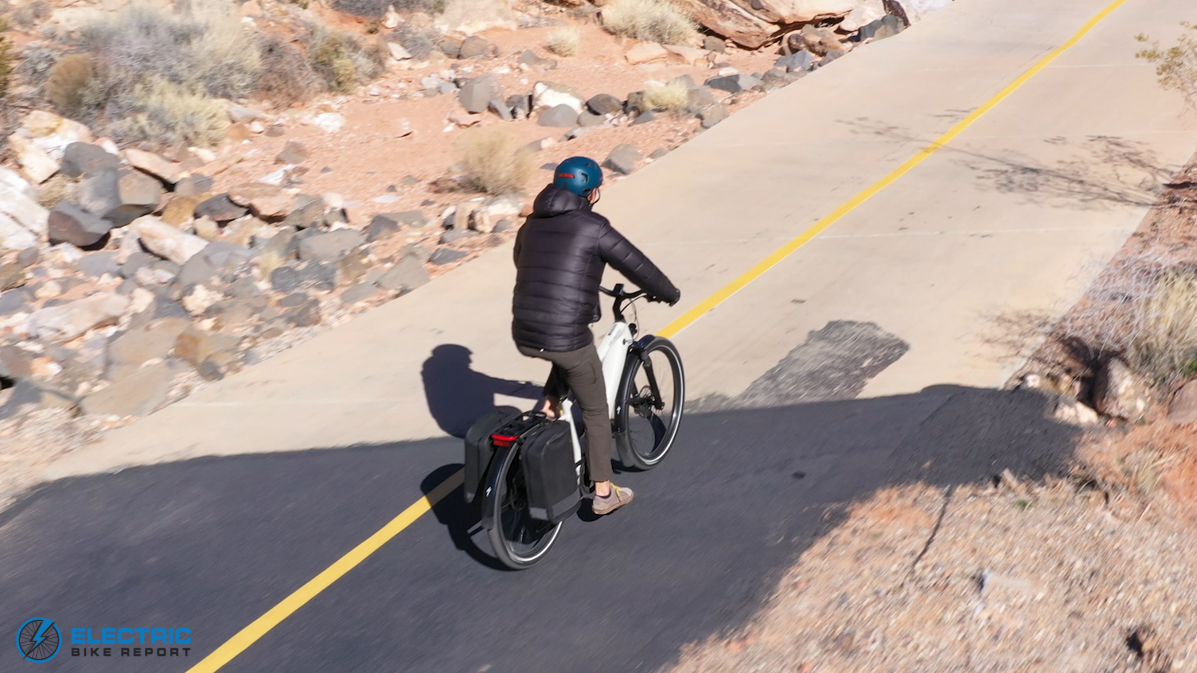 For the final step, we’re going to use the Trek Allant+ 8S as an example — an e-bike that’s on my personal short list for a new long-range commuter.

We’re going to need the battery voltage and amp hour rating, as well as its motor’s nominal wattage rating. If your chosen bike lists only the motor’s “peak” or “max” output, that won’t work.

Here’s all the specs from the Allant:

All the above specs are typically easy to find on a manufacturer’s website.

In the case of the Allant:

A bike’s watt hour rating is key to understanding its range. This metric describes how many watts are available for consumption per hour. So, continuing to use the Allant as an example, it’s battery could theoretically power a 601.2W motor at maximum output for one continuous hour before it runs out. But the Allant doesn’t have a 601.2W motor, it’s got a 250W motor.

By dividing the battery’s watt hour rating by the motor wattage, you can determine how long that battery will power a motor in hours.

So in summary of what we’ve figured out so far, the Trek Allant+ 8S can theoretically power its 250W mid-drive motor at full power for 2:24 before the battery would run dead.

Before we move on, here’s an important thing to know about using watt hours to calculate range. This method ONLY tells you the approximate battery life when the bike is being used at full power and in lab-controlled conditions where factors like terrain and weather conditions have no bearing on the result. It’s an imperfect estimation of range, but it does give you a good idea of the minimum amount of time a battery will power a motor. In the real world, factors such as coasting, your pedaling and using lower pedal assist settings will likely extend your range.

Now, to take the battery’s range in time and use it to estimate range in distance. For this, we’re going to need to know a little about our own abilities.

Specifically, we’re going to need a good idea of our average speed on an e-bike.

For me, since the Trek Allant we’re using as an example is a Class 3 e-bike, I know that my real world average speed on a bike like this is conservatively around 19 or 20 mph including stopping at lights and navigating traffic on the bike path.

Be conservative when coming up with your average speed. Even on Class 3 e-bikes capable of 28 mph, things like terrain, traffic and stopping slow you down quite a lot. Note that the higher the average speed, the more likely you’re going to have to pedal on top of the motor’s assistance.

If you don’t know your average speed, I’d highly suggest choosing a number around 15 to 16 mph. It may seem low, but it’s a likely speed for new riders or for those who may be uncomfortable carrying high rates of speed in tight or congested areas (always follow your local e-bike laws and speed limits, which even exist on most bike paths).

Back to our example with the Trek Allant: Here’s how I convert the bike’s range in time to an estimated range in distance.

You multiply your chosen average speed by the bike’s range in time we calculated above.

So for that Trek Allant, I’d conservatively estimate a 45.79 mile range, which mostly fits the range needs I listed above.

Always remember that this is an estimation. Knowing a little about the Allant and its Bosch motor and battery system, I wouldn’t really expect the bike to last 45.79 miles on its maximum assist mode — especially on the hilly terrain where I live. I think that mileage is far more likely if I toggled between different assist modes and saved the high power settings for hills, which is really how most people ride e-bikes anyway.

In short, e-bike range is an imperfect science. But with a little knowledge of yourself and e-bike motor and battery specs, you can make an educated guess at how a specific bike will perform.

What electric bike has the longest range?

We’ve spent a lot of time focusing on the Trek Allant+ 8S, but it is absolutely not the only long-range e-bike on the market.

You can find long haulers in every category of e-bike, from fat bikes to small folding e-bikes.

Need some help getting started? The Electric Bike Report team has tested more than a few e-bikes with stellar battery life. Those include: