What do you get when you take the off-roading ethos of the Jeep brand, a full suspension all-mountain chassis and top it off with a souped-up 1,000W mid-drive motor? You get the QuietKat Jeep.

In this QuietKat Jeep review, we take a deep dive into the bike’s climbing ability, battery life, off-road performance and more to get the low-down on what makes this all-terrain electric fat bike special.

With a very capable full suspension design and one of the most powerful e-bike motors on the market, the Jeep is designed to tackle backcountry roads and rugged 4×4 tracks with ease. It comes with a stout suspension system, good brakes, a crisp shifting groupset and a host of other features that make it uniquely capable in environments far too punishing for your average e-bike.

Keep reading to see how this e-bike stacks up against the rest.

While QuietKat does make the Jeep in a street legal configuration, the one we’re reviewing is not. This bike is designed for use in off-pavement OHV areas or on private land, pretty much the same places you’d go to ride a non-street legal dirt bike.

This version of the Jeep is spec’d with the Bafang Ultra 1,000W mid-drive motor that, while not kosher for use on roads or bike paths, is an absolute monster of a motor for use in OHV areas. That motor makes a whopping 160Nm of torque and has seemingly little to no limit on how fast it’ll go — and believe me, this thing goes REALLY fast.

If you want the Jeep in a configuration that can be ridden on streets, QuietKat does sell one with a 750W motor that comes with a Class 2 speed setting.

The Jeep is a member of a relatively new and enigmatic class of e-bike I typically call the all-terrain or off-road category, though I don’t know of any official name for these types of e-bikes yet.

Bikes in this category occupy the gray area between street legal e-bike and full fledged electric dirt bike. They’re typically powerful, use fat tires — the Jeep rolls on a set of 4.8-inch CST tires — and are built with quality enough components to handle sustained abuse in off-road environments.

These bikes were birthed from the hunting category of e-bikes, which is a class of off-roaders designed to take sportsmen and their gear quietly and efficiently into the backcountry (hence the name QuietKat). But the makers of these hunting e-bikes quickly realized there’s a market for slimmed down versions that can rip fire road, double track, or even some of the infamous Jeep roads in Moab as QuietKat seems to frequently do.

It really is impressive how well the Jeep handles off-road terrain. I typically stop short of calling most of the e-bikes we review mountain bikes, but the Jeep is awfully close. At 70 lbs it’s still likely too heavy to be much fun on tight single track, but it’s spec’d with componentry pulled straight from mountain bikes.

The drivetrain is the durable SRAM X5 9-speed groupset, which shifts nicely and seems to handle the motor’s load when shifting fairly well. It’s a full suspension e-bike with 150mm of travel front and rear. The rear shock is a RockShox Monarch SL and the front fork is a very cool inverted design from GT MRK, a relatively unknown fork brand that seems to exclusively make OEM parts.

Braking is handled by a set of Tektro Dorado 4-piston brakes with 203 mm rotors front and rear. Finally the battery on this bike, which is integrated into the frame, is a 48V, 14.5Ah (696Wh) unit. 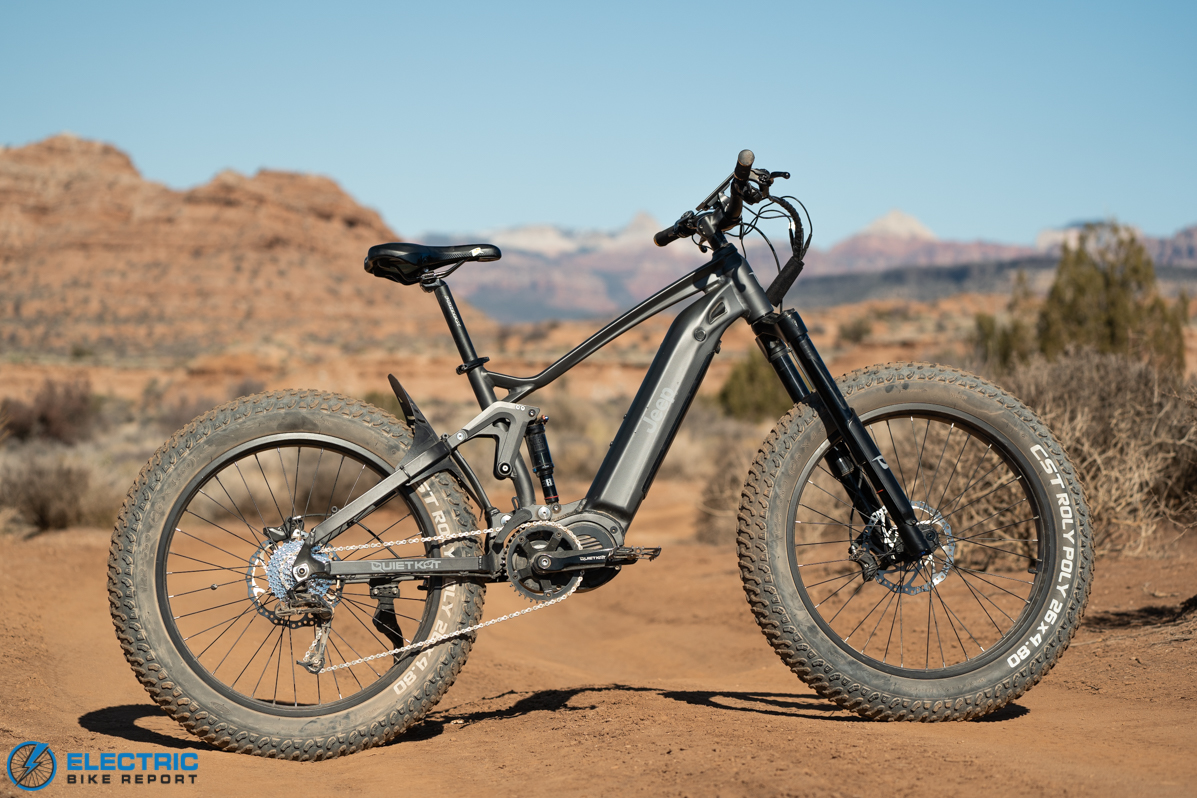 Even without factoring its stellar performance, the QuietKat Jeep is quite a looker. 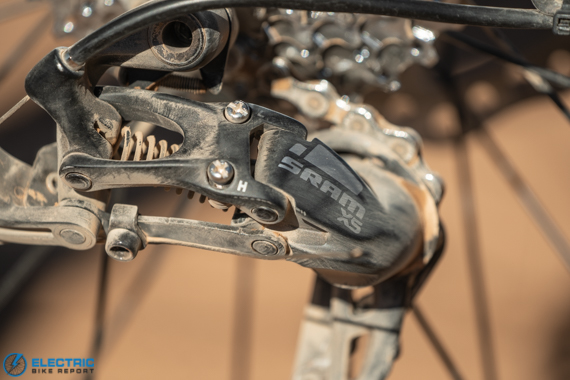 The SRAM X5 9-speed drivetrain is an economical groupset that performs well. 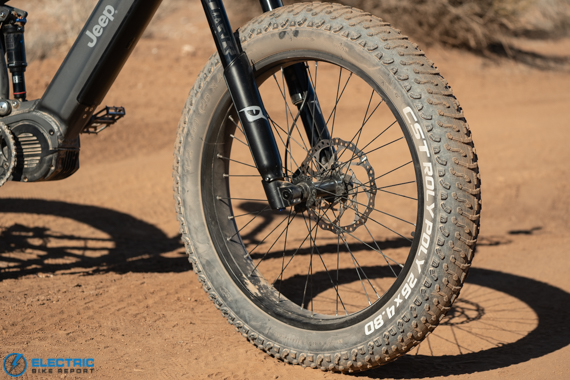 Even among fat bikes, the 4.8-inch CST RolyPoly tires are big.

As we’ve said before, the 1,000W Bafang Ultra motor is blazing fast but not street legal. If you want a version of this bike you can ride on the road or bike path, QuietKat does sell it with a 750W motor.

In many respects, this thing on a 4×4 road feels like a cross between a light-duty dirt bike and a mountain bike. The 1,000W motor is enormously fun and feels far more powerful than your average e-bike, but it weighs considerably less than an electric dirt bike and has eMTB componentry. But while its motor is big, it’s still several thousand watts less powerful and the top speed far slower than your average electric dirt bike, so I do not think the Jeep strays into the realm of electric motorcycles.

We put the Jeep’s 1,000W motor to the test on the Electric Bike Report circuit to get a sampling of the performance of each PAS level in Sport Mode. There is an Eco Mode with its own set of five pas levels, but for simplicity’s sake we did all our testing on the Jeep in Sport Mode — let’s be real, if you’re buying a 1,000W e-bike you’re probably looking to use that power when you ride.

We did a total of six laps around our circuit on the Jeep, one for each PAS level plus one additional lap with the motor off. What we found was an expectedly slow lap with no assistance with a considerable jump in speed starting in PAS 1. In fact, the Jeep’s 18.4 mph PAS 1 lap is the quickest PAS 2 lap we’ve ever recorded. From there, the speed progressed with each PAS level until a max average speed of 24.4 mph in PAS 5. 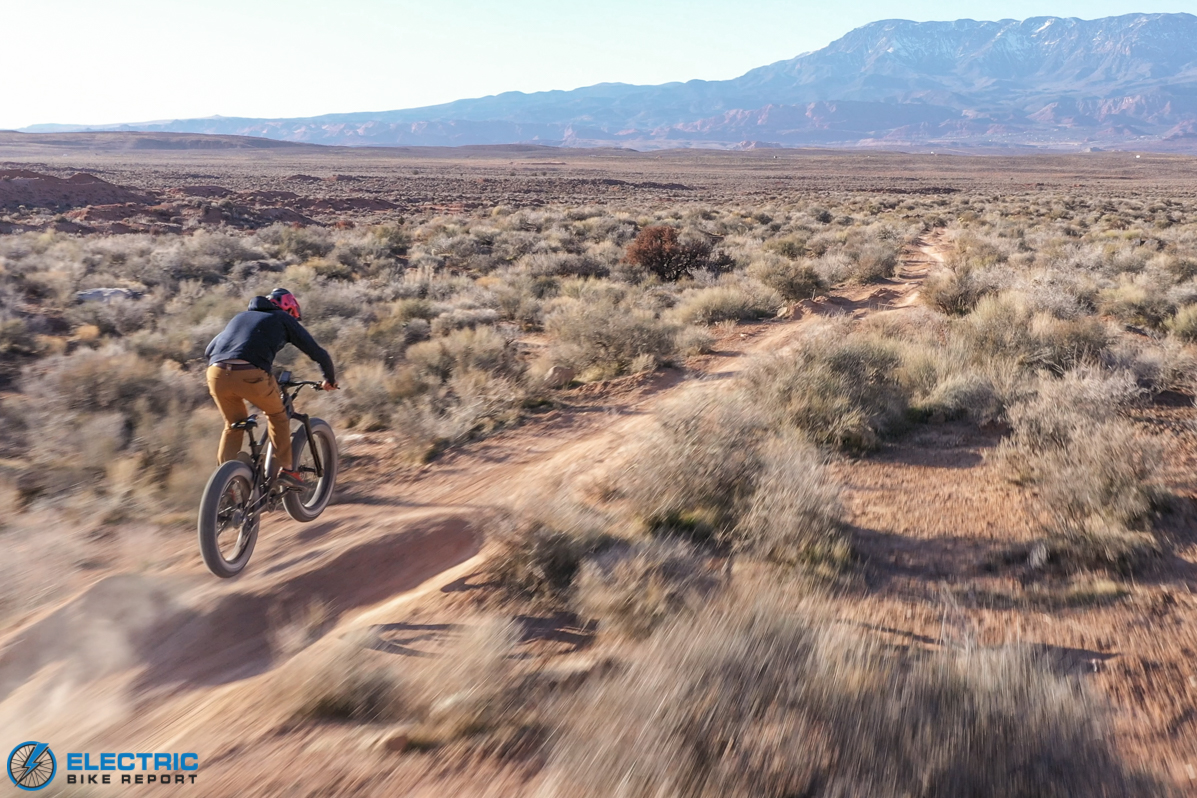 Even 70 lb e-bikes can get airborne, and the Jeep flies better than most. 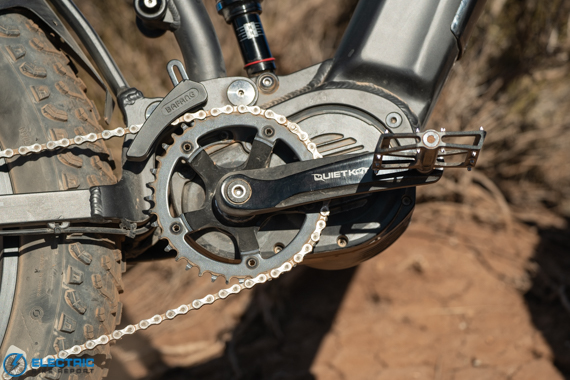 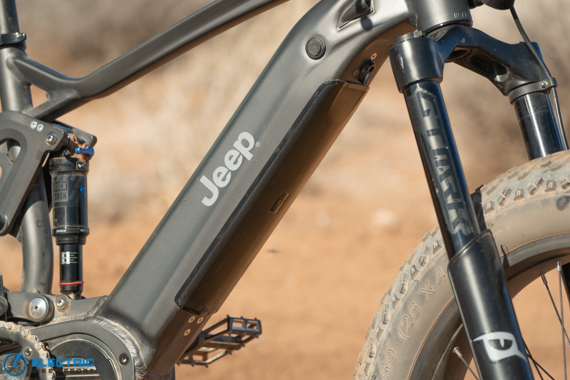 The 48V, 14.5Ah battery is housed inside the downtube of the frame.

While the Jeep’s massive motor is ridiculously fun, it does have a drawback: It uses energy extremely quickly.

To get an idea of how quickly the Jeep burns through its 48V, 14.5Ah (696Wh) battery we put it through two range tests, one in PAS 1 and the other in PAS 5. Like all the testing we did on the Jeep, both these range tests were done in the bike’s Sport Mode.

In short, the Jeep isn’t the most energy efficient e-bike. But frankly that’s what we expected. The bike’s 696Wh battery isn’t very big compared to the absolutely monstrous energy demands of the 1,000W motor. You can stretch that range in Eco Mode, low PAS levels and by pedaling instead of using the throttle, but I’d still expect the 1,000W Jeep to still be a relatively short range e-bike.

You can buy an extra battery for the Jeep, which I’d highly suggest if you’re looking to really use that big motor on longer rides. Or, if range is a priority for you, it may be worth considering the 750W version of the bike. It’s still an absolute monster of a motor (I got to ride one at a trade show) and it’s likely going to tax the battery less.

As you might expect from a bike with 1,000W of power and 160Nm of torque, the QuietKat Jeep made our test hill Hell Hole look like child’s play.

At a third of a mile long with an average grade of 12 percent, Hell Hole is long enough and steep enough to test most e-bikes near or beyond their hill climbing ability. But the Jeep is not your typical e-bike, and I’m pretty sure it was nowhere near its limits on either of its two timed laps up the hill.

While those timed hill tests were done on pavement, which is not the Jeep’s natural habitat, we did extensively test the bike on steep 4×4 roads and even some singletrack climbs. None of those climbs were timed, but I can anecdotally say there’s little the Jeep can’t climb. In my experience traction was usually the limiting factor, not the motor. 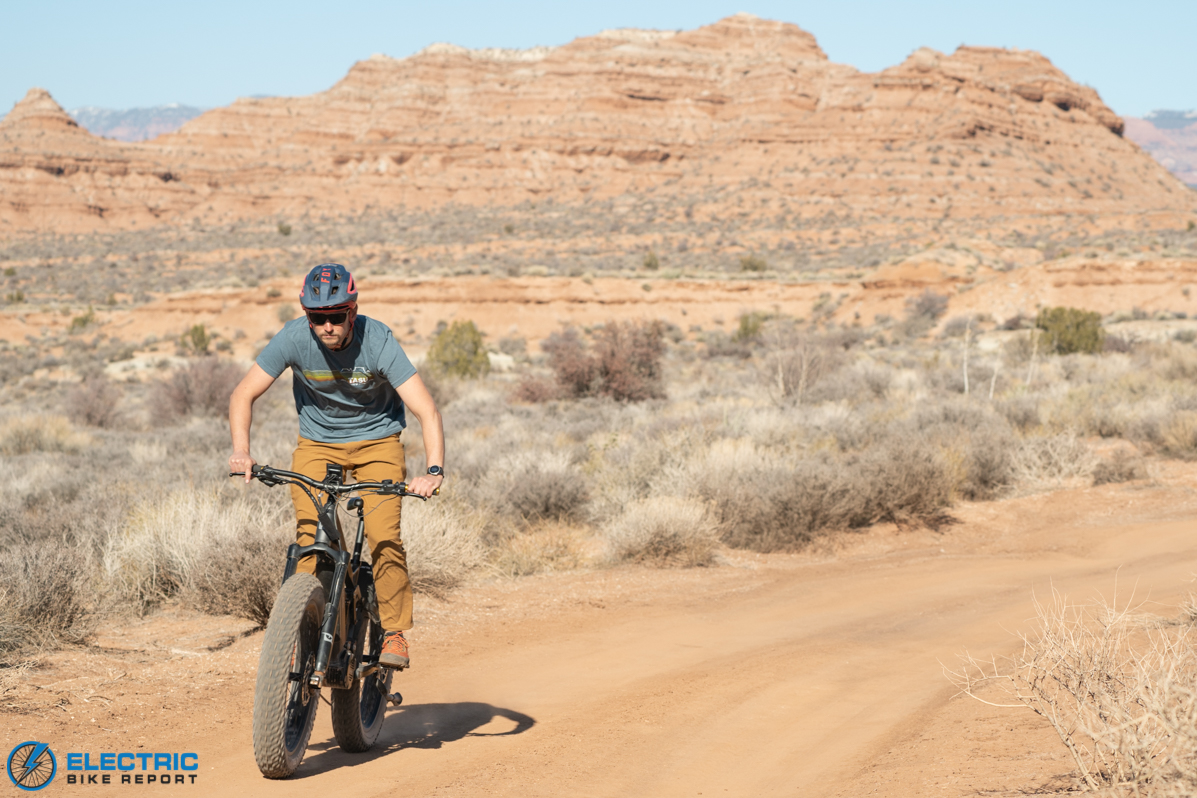 Fire road and 4×4 track is the Jeep’s happy place. Luckily there’s plenty of that in Utah. 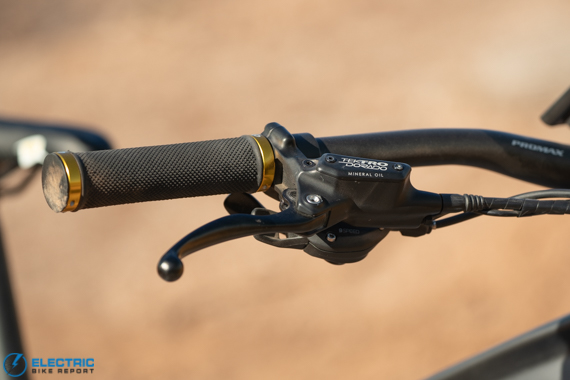 The Tektro Dorado brakes work well for the Jeep. 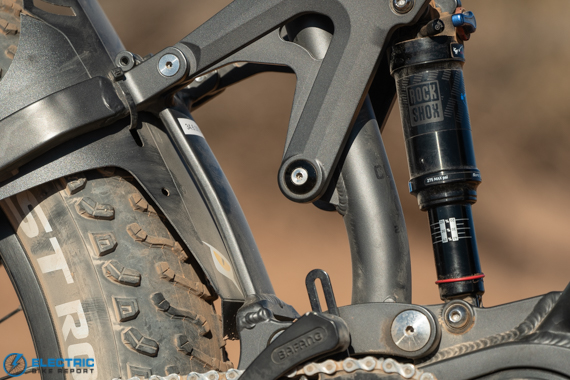 Absorbing hits in the rear is a RockShox Monarch RL with 150mm of travel.

Our review model of the Jeep is spec’d with a set of Tektro Dorado 4-piston hydraulic disk brakes that clamp down on some 203 mm disks.

We put these brakes to the test, conducting five full-power stops from 20 mph, and found they perform very well. The Jeep came to a stop at an average of 14-feet-4-inches, which is more than a foot better than our current all-time average stopping distance of 15-feet-10-inches.

Our testing confirmed that these brakes are plenty powerful for the Jeep’s speed and 70 lb weight. They also perform very nicely off-road. The Dorado’s have a nice lever feel that makes it easy to modulate how much force you’re stopping with, which can help considerably with traction.

I’ve gotten the chance to review a handful of e-bikes in the burgeoning all-terrain category, including the more affordable Himiway Cobra and a brief review of the Bakcou Storm, and I’ll say the handling of the Jeep feels superior to both.

It’s tough to directly compare the Jeep and the Cobra because the Cobra is spec’d at so much lower of a level and Himiway has less experience building all-terrain e-bikes, but comparing the performance of the two helps illustrate why the Jeep costs so much more. It’s simply a far better and far more capable e-bike that’s likely going to withstand much more abuse.

Compared to the Storm, which is a direct competitor of the Jeep, there are a few key handling differences that I’d say set the Jeep ahead. The largest difference is the Jeep’s inverted suspension fork, which makes the front end much stiffer and more stable feeling than the Storm. The Storm’s traditional fat bike fork works well, and even is better than the average fat bike fork, but it feels flexier in corners than the Jeep’s inverted fork. I like that the Jeep’s front end feels more precise; more like a surgical instrument that’s going to do exactly as I ask.

Cockpit wise, the Jeep’s got a set of wide mountain bike-style handlebars adorned with a full-color LCD display from Bafang, a thumb throttle, a small touchpad and the shifter on the right-hand side. It’s a fairly normal setup that works well. 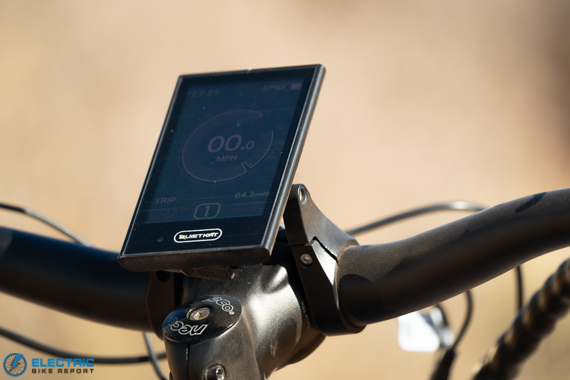 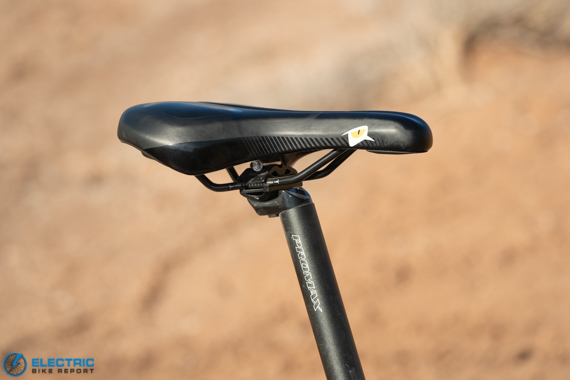 The QuietKat-branded seat is comfortable and slightly athletic, which suits the bike well. 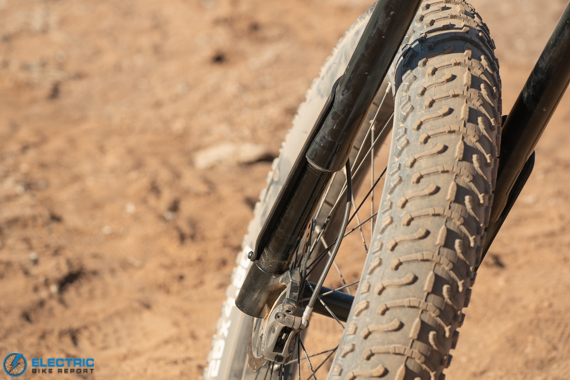 A design we more commonly see on dirt bikes, the Jeep’s front fork is inverted. This helps stiffen up the front end. 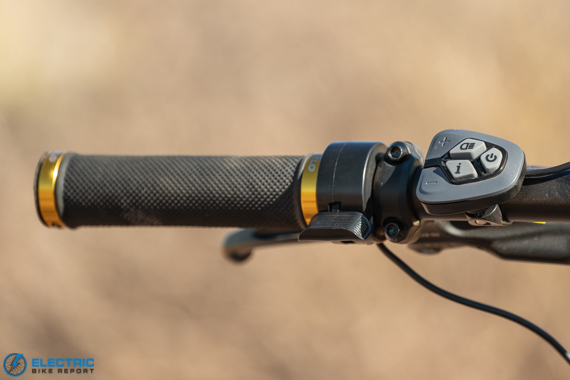 My long background as a traditional non-motorized cyclist is always going to make me pretty skeptical of e-bikes like the QuietKat Jeep.

With their huge tires, hefty weight and powerful motors, e-bikes like the Jeep don’t jive too well with my definition of what makes a good off-road e-bike, let alone a good eMTB. But the more time I spend on bikes like the Jeep, the more I think that’s a good thing.

The Jeep is something new. It’s one of the first in a new category of do anything, go anywhere e-bikes that harness power, capable design and smart component choices to make all-terrain machines that are wicked fun. Among the bikes that occupy this new category, the QuietKat Jeep may very well be king. It’s incredibly well built, the handling is perfect for blitzing 4×4 road and I think QuietKat made some very smart component choices that’ll stand up to any degree of abuse a rider will likely dole out.

If you like the QuietKat Jeep, it can be bought through their website and shipped directly to your door.

‘Happy Riding, make sure to let us know if you have any questions down in our comments section or if you think we left anything out in this review of the QuietKat Jeep.