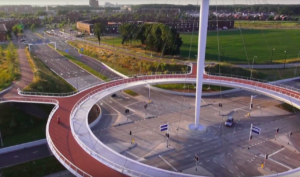 The more I have written about cycling over the years, the more I’ve come to realise the transformative effect good cycling infrastructure has on bike and e-bike use.

If done properly and along with other measures to curb private motor vehicle use it can transform cities and towns into places people want to work and live.

Netherlands and Denmark Lead the Way

In terms of cycling and e-biking levels the Netherlands and Denmark are world leaders and it is no coincidence both have superb cycle infrastructure.

If you think it’s always been that way this great video from BicycleDutch shows how the Dutch are almost unique amongst developed countries in having reversed the huge growth in car use and road schemes promoting their use that occurred in the decades immediately after WWII. 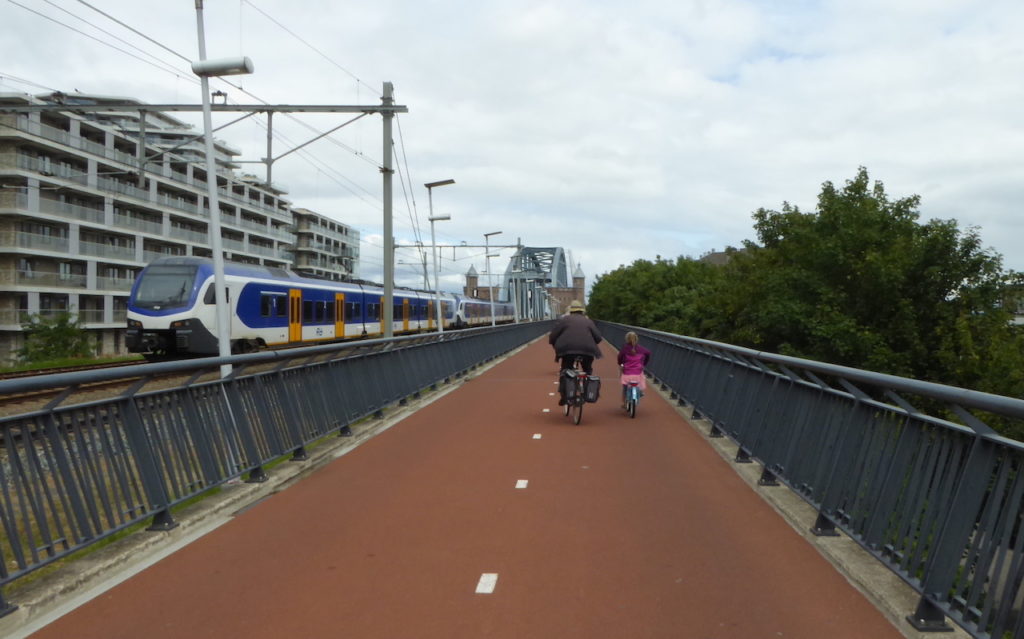 It was only in the mid-1970s that the Dutch started to construct the brilliant network of high quality cycle paths that is there today.

Like the Netherlands, in the 1950s Copenhagen underwent a dramatic decrease in cycling due to increasing wealth and rocketing levels of motor vehicles.

During the late 60s and early 70s the modal share of bicycles fell to an all-time low of 10%.

After the 1970s oil crisis the Danish Cyclists Federation experienced a massive increase in membership and, as in the Netherlands, there were mass demonstrations. 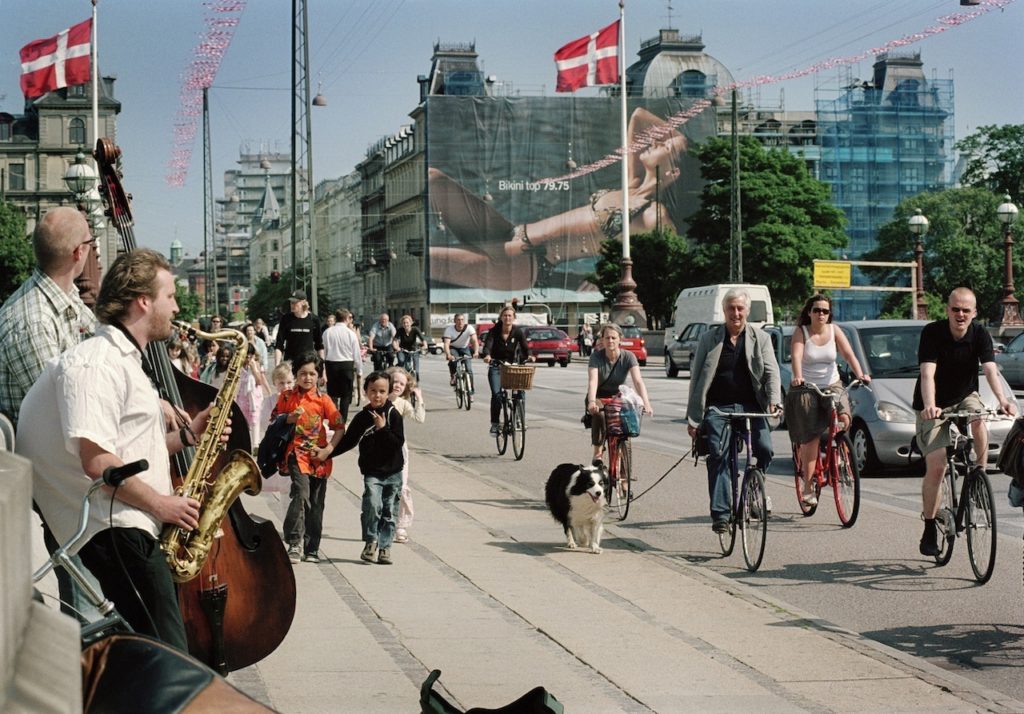 Widespread cycle lane construction began in the 1980s and by 2010 modal share of cycling in the city area of Copenhagen had reached a staggering 50%.

For the City of Copenhagen’s explanation of why they have been so successful check out this video:

And for a UK perspective see Chris Boardman’s view:

The principles behind the design of Dutch and Danish cycle lane systems have seen a huge decrease in road traffic casualties, as witnessed in this video from Peter Furth of the Northeastern University of Boston, who feels such an approach should be applied to the US.

As it shows, it’s not all about having segregated cycle lanes, but about controlling the speeds of motor vehicles when they do mix with bikes and e-bikes.

The Dutch are not resting on their laurels however, with cities like Utrecht leading the way to take cycle infrastructure to the next level and safely accommodate the evergrowing number of cyclists in their evergrowing cities. 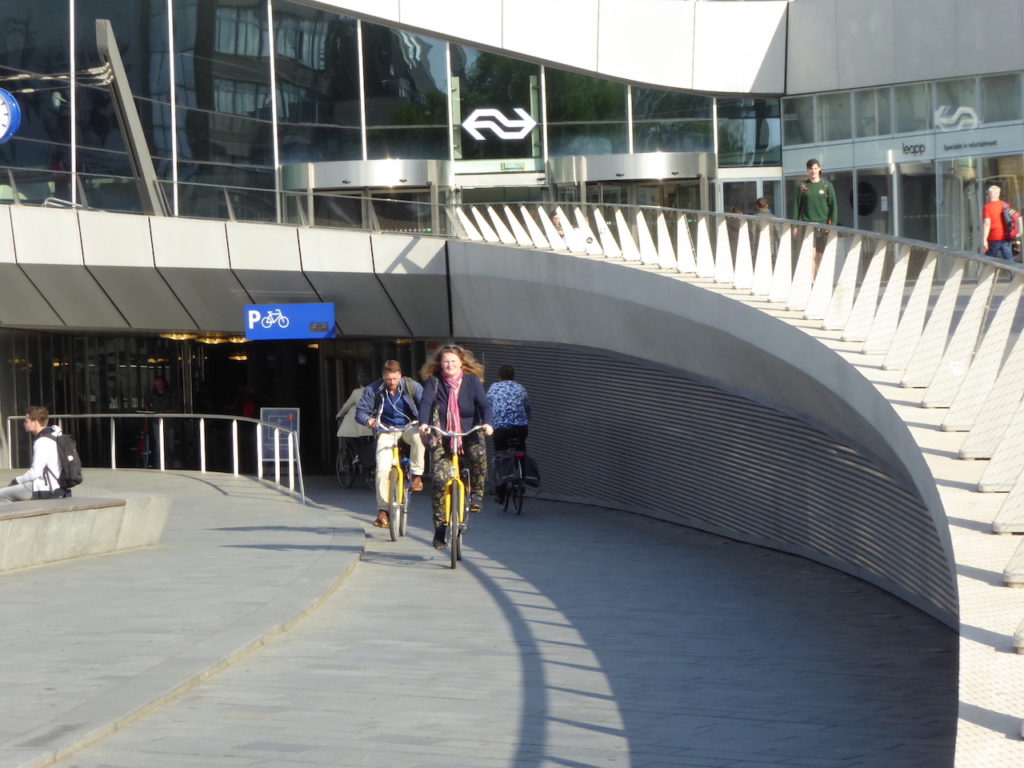 Here’s just one example in the form of the world’s largest secure bike parking facility in Utrecht which began its phased opening only a couple of years ago.

London, UK Takes the Lead but Others Follow Suit

In the UK it’s a case of old vs new, with leading cycle city Cambridge way out in front. 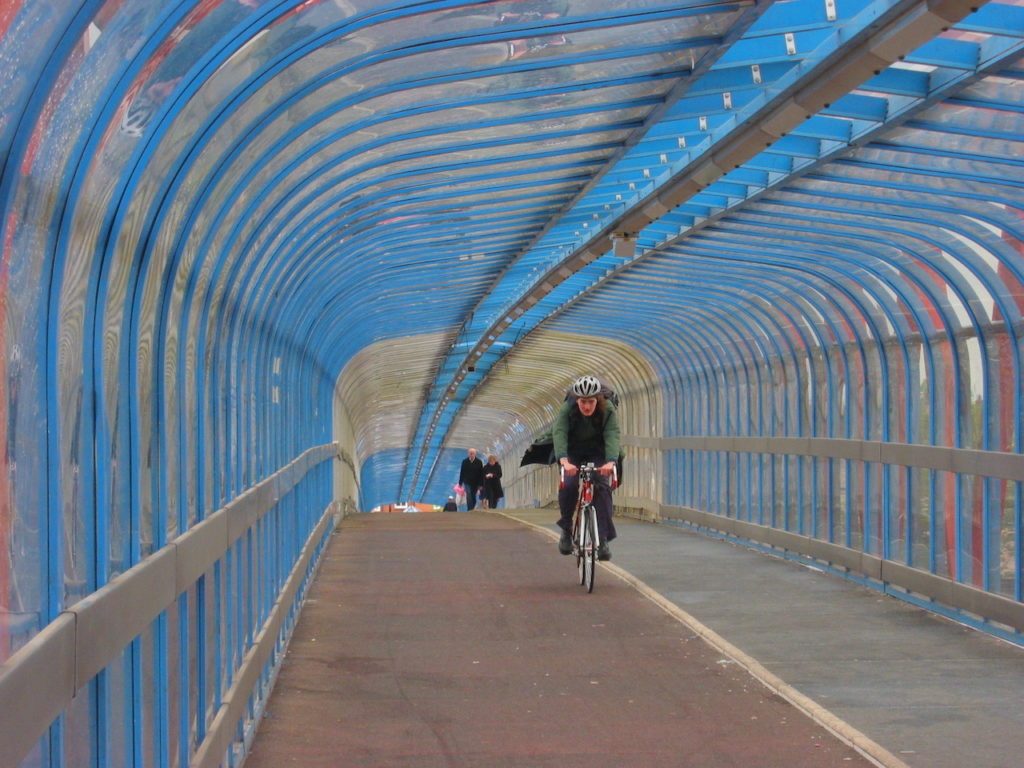 Admittedly, ancient university towns with many traffic-free or virtually traffic-free streets in their centres are off to a head start, but places like Cambridge also have an active and well-funded cycle infrastructure programme.

It boasts more than 80 miles of cycle lanes, and there are dozens of other routes linking the city with surrounding towns and villages.

The main railway station’s bike park, CyclePoint, which opened in 2016 has room for nearly 3,000 cycles. 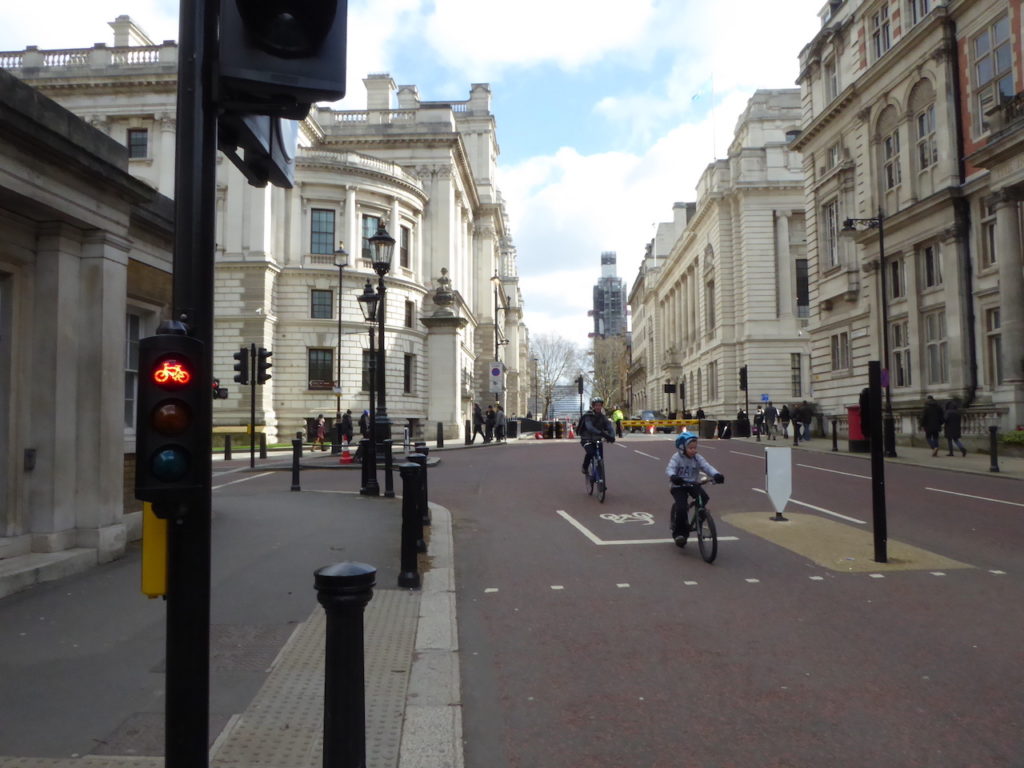 Cycling levels in London continue to rise at an impressive rate, with 2018 seeing the biggest rise recorded yet on the back of several years growth, all tallying with the launch of more high quality, fully protected cycle lanes.

Nor is it any surprise that London boasts a number of e-bike specialist shops. 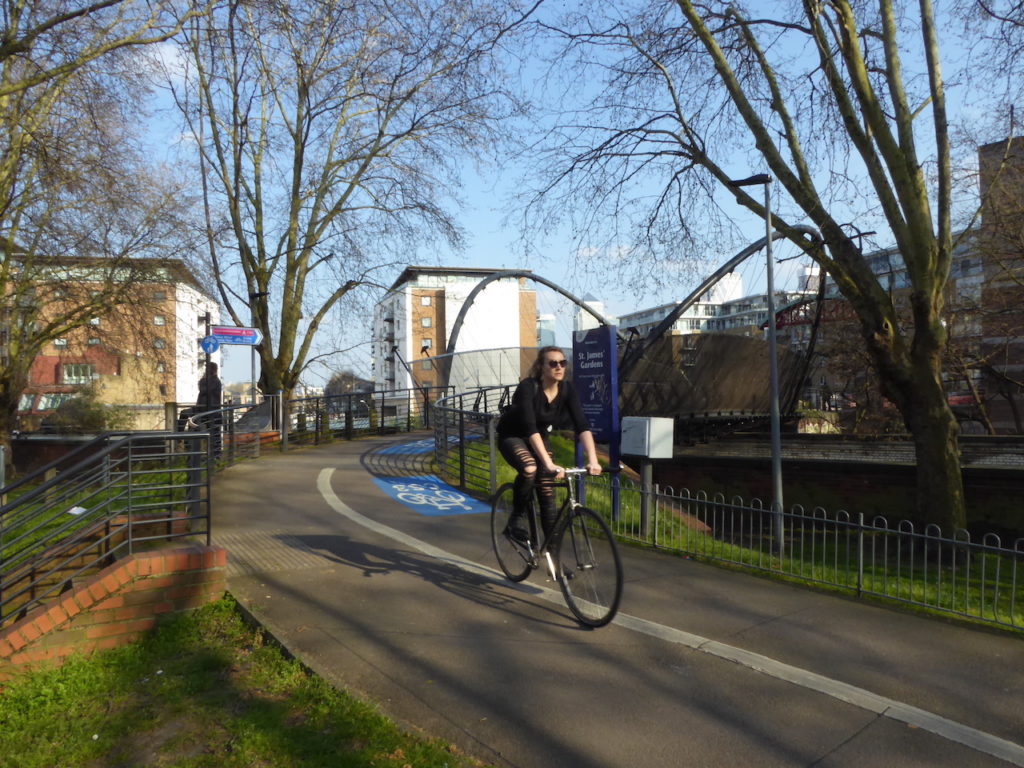 Whilst the detractors moan that some of the cycle lanes are sparsely used this is generally at very off-peak times; this Bikebiz article tells us that ‘in zone 1 (central London), during the morning rush hour, 32 per cent of all vehicles on the roads are now bicycles. On some main roads, up to 70 per cent of vehicles are bicycles.’

It also mentions the London Congestion Charge as being a contributory factor to limiting the presence of motor traffic in central London.

The following video shows the amazing success of cycle infrastructure in London over the last couple of decades though its interesting to see that one of the challenges is to make the cyclists slow down to make much older and younger riders feel more at home.

Other wins for the infrastructure include plenty of usage of the public share bike scheme and improvements in air quality at certain junctions.

There are plenty of examples cities that have used infrastructure to boost cycling levels.

Even within the UK the north-eastern town of Darlington has a low profile but, after being designated both a Cycling Demonstration Town and a Sustainable Travel Town, the Department for Transport (DfT) issued independently quantified result for Darlington showing a 9% reduction in car trips, a 113% increase in cycling trips and a 14% increase in walking trips over the period 2006-2011.

The northern cities of Manchester and Leeds have both followed London’s example investing significant amounts in cycle superhighways in to their centres. 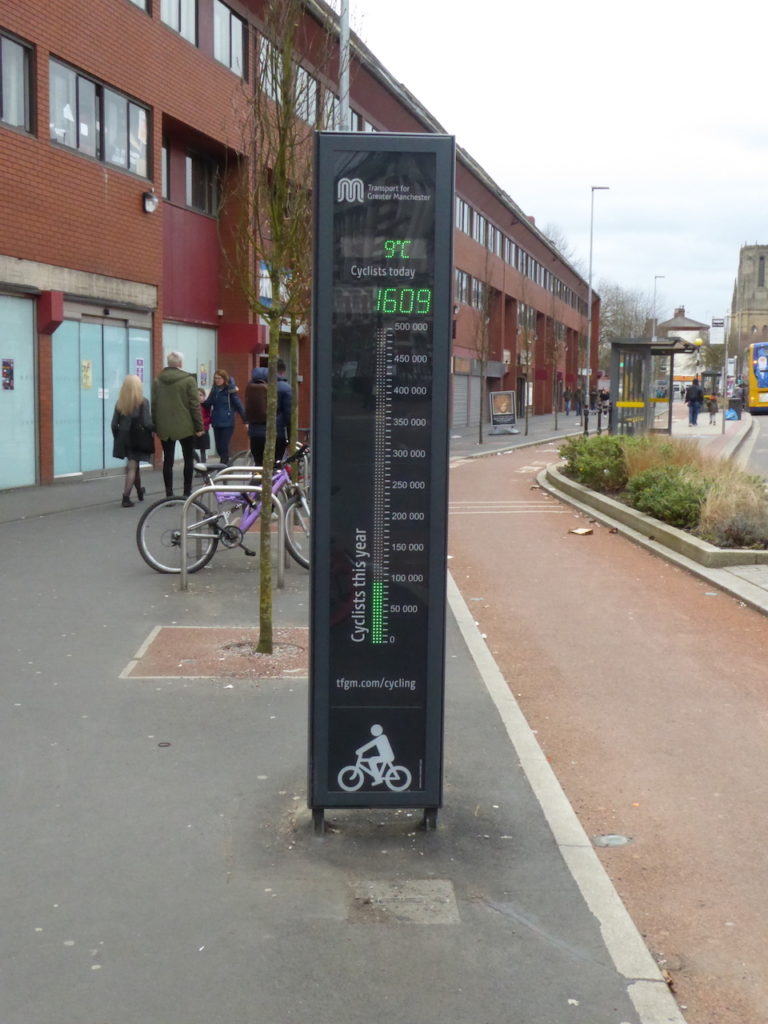 The Leeds-Bradford cycle superhighway recently clocked up it’s one millionth cycle trip since it opened in 2016 and the Oxford Road cycle lane in Manchester, which also has huge cycle ambitions, is clocking up about half a million cycle trips a year. 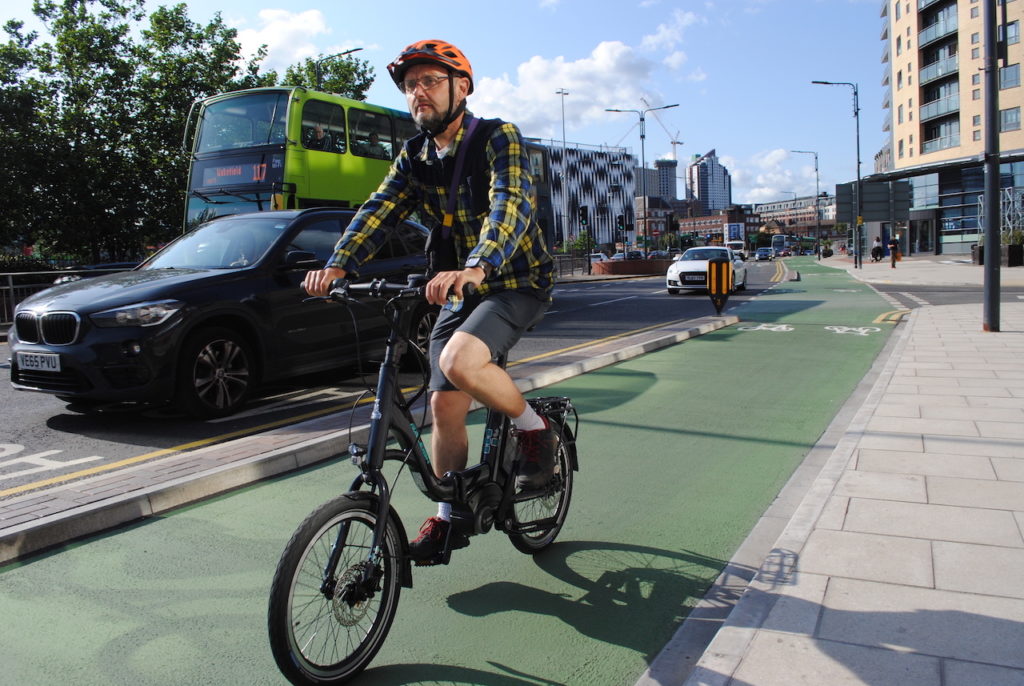 Although, like the UK, the US has lagged behind continental Europe in embracing fully protected cycle infrastructure some cities are getting message, as this 2018 list of the country’s top cycling cities shows. 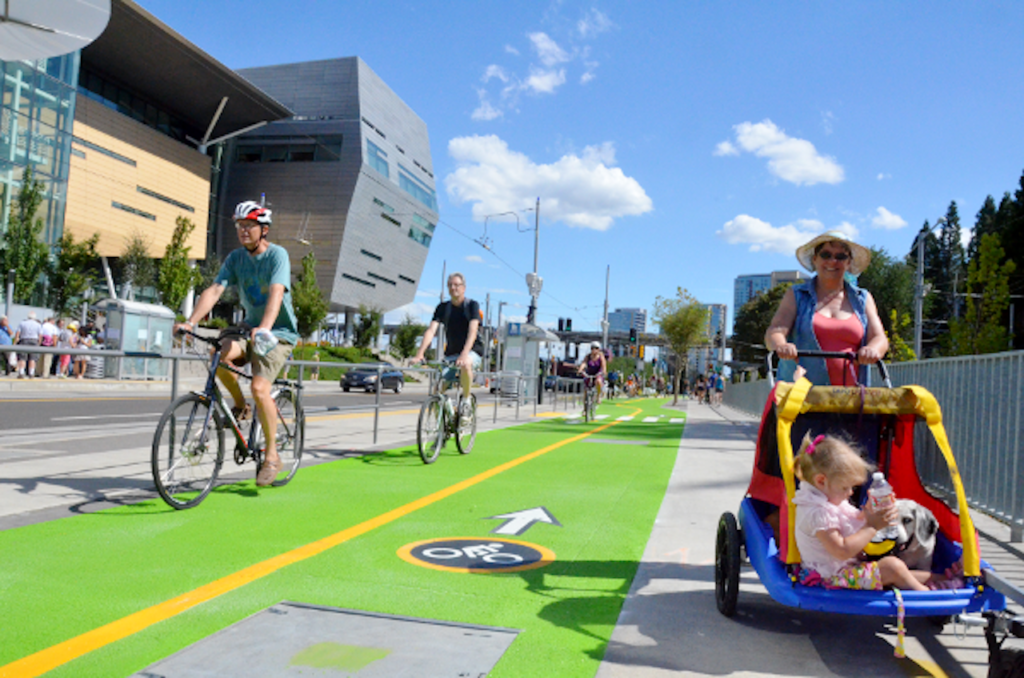 There are the usual suspects in there such as Portland (see here for its progressive policy on protected cycle lanes) and Minneapolis it’s noteworthy that Seattle has leapt up from 5th to 1st position on the back of fully protected cycle infrastructure. 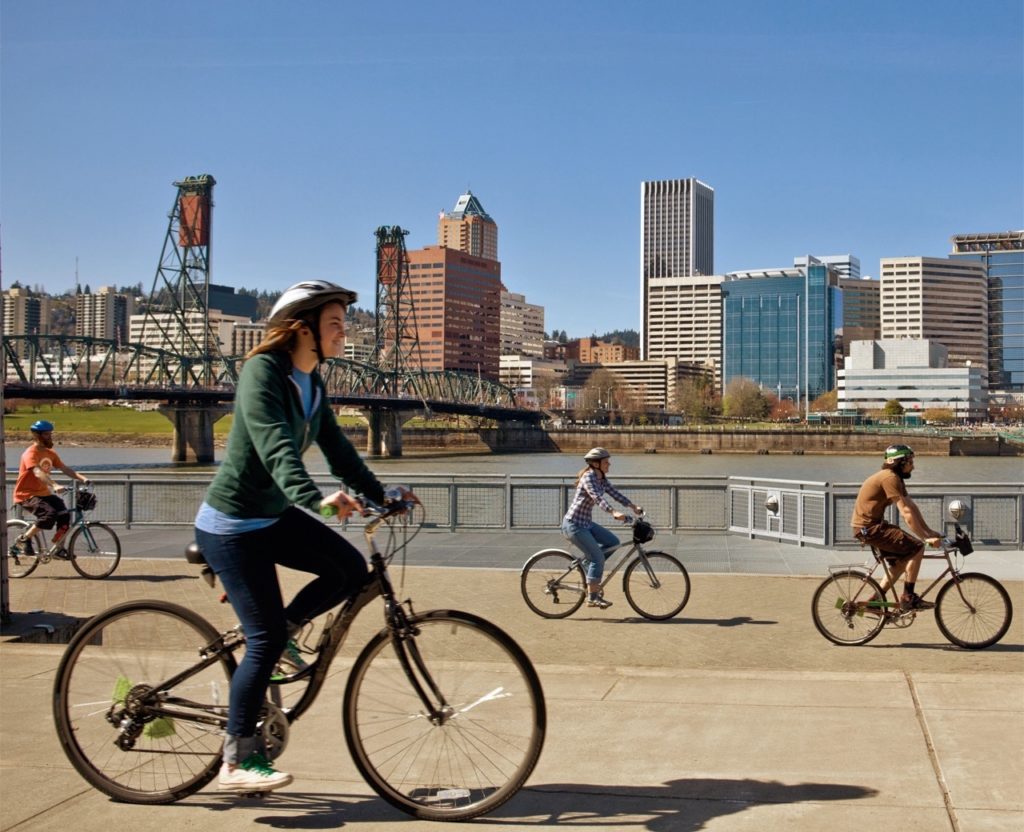 The former has gone from no protected cycle lanes in 2010 to 20 miles worth of protected riding now.

And between now and 2021, the city is investing $112 million in bike-related improvements.

In Fort Collins there are an impressive 45 “grade crossings” (ie under- or overpasses) throughout the city.

Extensive well-protected, well-connected cycle lane networks are the transport veins and arteries down which cyclists can flow.

However, there are many singly iconic examples of cycle infrastructure that make a statement of real intent to a place’s serious commitment to promoting cycling as well as being practical cycle promoting schemes in themselves.

Here we look at the best examples form around the globe:

Portland Tilikum Bridge is simply the largest car-free bridge in North America. It carries streetcars, light rail and buses across the Willamette river as well as thousands of cyclists and pedestrians daily.

Interestingly one raison d’etre of the traffic-free bridge is that is allows more building development at either side; ramps and junctions for a motor vehicle bridge would apparently have taken up far more space at either end.

It’s also visually attractive with LEDs changing colour with changes in water flow and temperature in the river to create its own constantly changing light art. As one commentator says, ‘It’s a crown jewel for us.’

The Nescio cycle bridge is the longest single cable suspension bridge in the Netherlands and it is traffic-free. 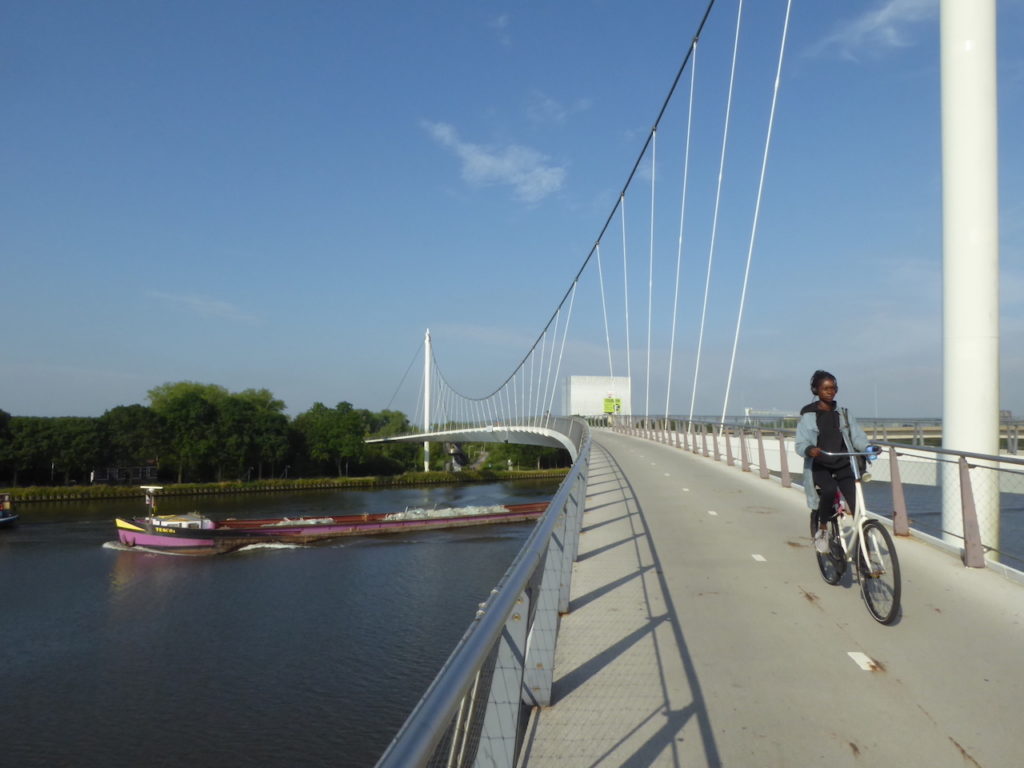 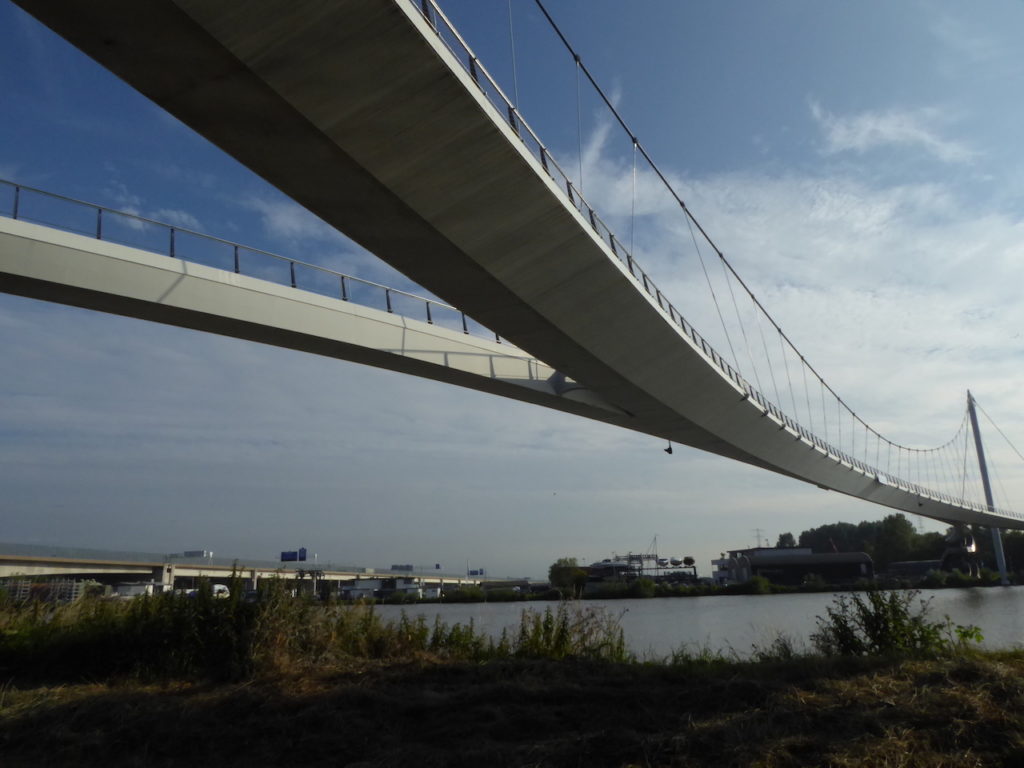 It has a 33ft clearance over the canal so large ships can easily pass underneath. 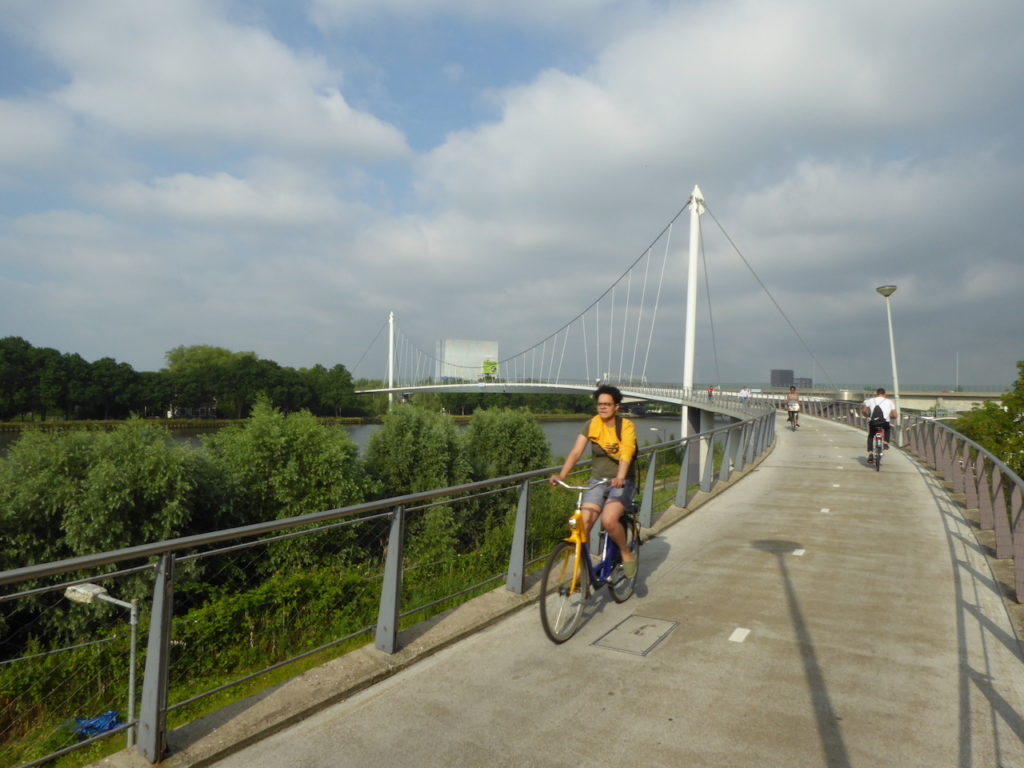 It is almost half a mile long due to the gently graded approaches for cyclists at either end. 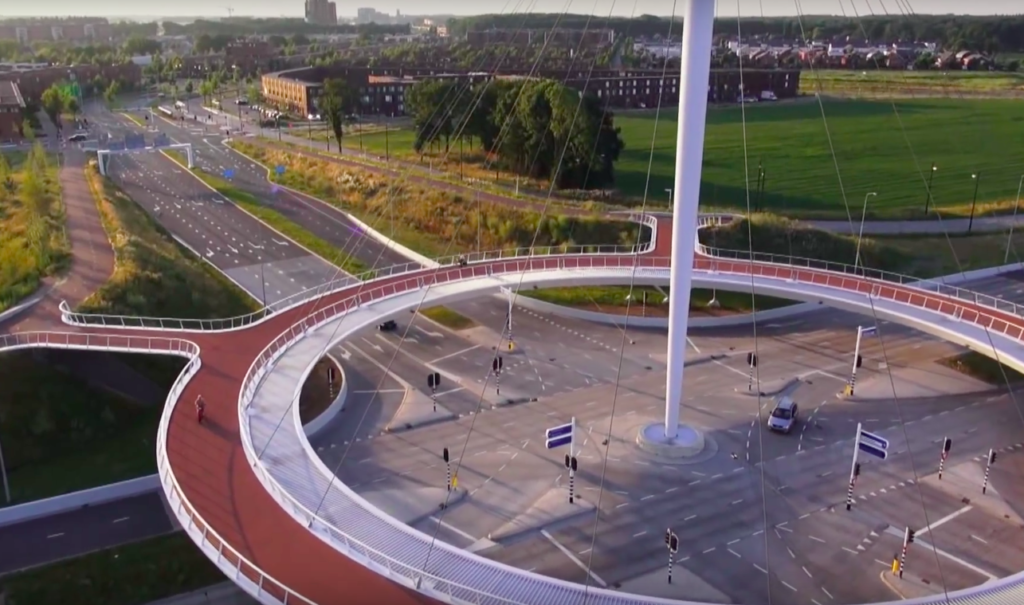 The Hovenring is an aerial cycle roundabout near Eindhoven in the central Netherlands and could be mistaken for a UFO hovering above the road network.

It was developed from 2008, when increased traffic was starting to overwhelm the capacity of the roundabout on the crossing of the roads at the site.

In order to improve the flow of traffic and improve safety, it was decided to completely separate motorized and bicycle traffic.

The city council of Eindhoven decided that they wanted to develop an eye-catching project, in keeping with its ambitions as a so called high tech ‘Brainport’ technology region – that’s to say they wanted to build something that would improve the life of everyday cyclists and put the area even more on the map.

Copenhagen’s so-called ‘snake bridge’ is a 230m short cut across a harbour in central Copenhagen.

More than 20,000 cycle journeys are made across it every day. 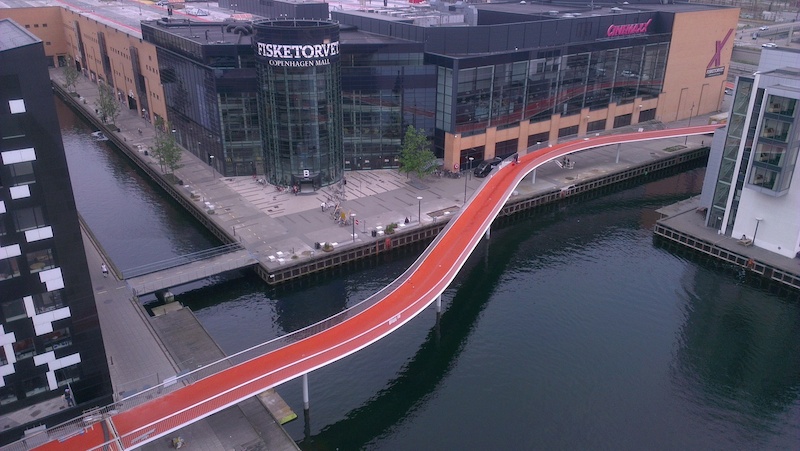 It weaves its way around the glass-fronted buildings on the harbour front at first floor level. It’s bike only, with pedestrians using the space underneath the bridge.

Before the bridge was built Copenhageners had to lug their bikes up and down the stairs, and share the limited space with the pedestrians on the steps; it has been estimated that every cyclist saves 1 minute by not having to use the stairs, which amounts to almost 2000 euros a day — that’s more than 0.7 million euros a year in socio-economic benefits and a payback time of 7 years for the bridge.

Cities are getting bigger and busier and space for all purposes, including transport will only be at more of a premium.

Cycle lanes are so space and time efficient they are a large part of the answer to current and future transport and lifestyle problems that afflict modern society.

Detractors baulk at the cost, but the future benefits and savings are so great that, as one commentator put it, it is cheaper to build them than not to build them.

To give a more concrete example given here, ‘$60 million is the estimated replacement value for Portland’s bicycling infrastructure in 2008. That’s the approximate cost for one mile of urban freeway.’

An interconnecting network of protected, interconnected cycle lanes are a lifeline to a more sustainable, healthier and e-bikeable future for any city.