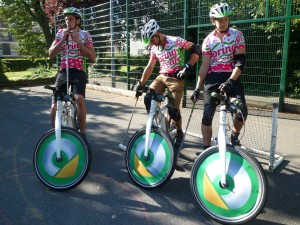 Bike polo is a lot of fun (I know from personal experience) and using electric bikes would make this high paced game pretty wild!

The folks at Smart Electric Bikes put the Spring Break bike polo team in London on their bikes and created some cool videos of this crazy sport.

Haven’t heard of bike polo?  Well, it is very similar to traditional horse polo except it is played on bikes.  Some people play bike polo on grass fields but there are a lot of folks who play polo on asphalt courts or “hardcourts”.

Bike polo is a high paced game with some occasional crashes.  Maybe that is why it is a great spectator sport 🙂

Here is the intro video with some good footage of the game:

And here is a video with some background on bike polo:

Here is more info on the sport of bike polo.

What do you think?  Would you like to play bike polo on an electric bike?  Please leave your comments in the section below.