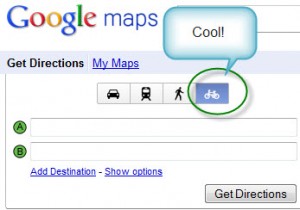 Google has put together a way to get directions from point A to point B with a bicycle route in mind.  This means that Google Maps will give you directions on the less traveled streets so that you can avoid a lot of car traffic and it also provides you with routes that avoid steep hills as much as possible.

Here is a video that will give you more details:

I have checked it for some of the routes that I use around Sedona and it seems to work pretty well.

Right now it is still in the developmental stages and Google encourages comments if there is a route that is not that great for bikes.  Here is their disclaimer that shows up after you get your directions:

“Bicycling directions are in beta.
Use caution and please report unmapped bike routes, streets that aren’t suited for cycling, and other problems here.”

I think this a great way to go if you are not familiar with the potential bike routes in your town or city.

With more and more people getting smartphones such as the iPhone this will be a service that people can truly use on the go.  As of right now the Google Maps app on the iPhone does not include the bike routes,   Update: Here is an app for the iPhone that does just that, checkout the Bike Maps app.

Check out some bike routes in your town or city.  Maybe you will find some new routes that you haven’t considered before.  Or maybe you can provide Google with some feedback on better routes.

P.S. Don’t forget to get sign up for updates from the electric bike world, plus ebike riding and maintenance tips!