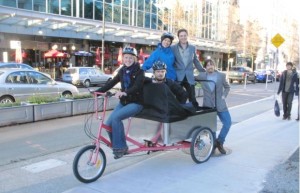 Okay, the big news this week was this concept electric bike from Nicolai/Gates/Nuvinci.  I put together a post on Electric Bike Report about the Future of Electric Bikes.  Wired posted an article called “Even the Laziest Rider Could Use this Electric Bike”.  I take exception to the title of this article, checkout my comment at the end of their post.

Electric bikes are officially allowed on Great Alleghany Passage Trail which is a rails-trail that offers 135 miles of hiking and biking between Cumberland, MD, and Duquesne, PA, near Pittsburgh.

I like these kinds of posts: “22 reasons to get an electric bike”.   Especially for people who say “What’s the point?” 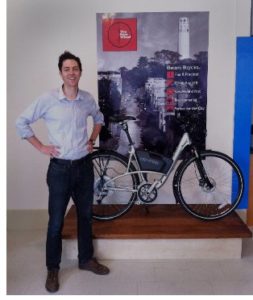 Brett from the New Wheel in San Francisco

Brett from the New Wheel in San Francisco has had a mobile electric bike shop where he would go to his customers.  Well now he has decided to open a store front near Telegraph Hill in SF.   Check the new New Wheel store out if you are in the area!

Here is a cool story about a guy that has been using his electric bike to save money that he normally spends on gas/parking/car maintenance.  He said “With all the savings made so far, I’ve more than covered the initial outlay of the bike, so everything from now on is pure profit.  The best thing is it’s actually very pleasant to ride.  I don’t get all hot and sweaty as I would on a normal bicycle and it’s fast.”

Electric bikes are “developing at an unprecedented speed” in China! “Besides commuters and elderly people, students especially high schools students are becoming an important consumer group of e-bikes. Style is more important for them than price.”

Gas price are up and people are searching the internet for bikes and electric bikes; searches are up 58%!

TransX PST has launched their new mid motor bottom bracket e-bike drive system.  This system uses the motor to assist through the cranks of the bike and allows the use of internally geared rear hubs.  They generally require special design bike frames though.

I am really excited about electric bikes being powered by solar energy and there is a company in Australia selling kits that do just that!  Oh and their name is SolarBike, who would have guessed 🙂

Do you live in Seattle Washington?  Do you want to win an electric bike? Check this out!

5 students have started an electric trike delivery business in Vancouver BC.  I really like the idea of local deliveries with these light weight electric vehicles 🙂