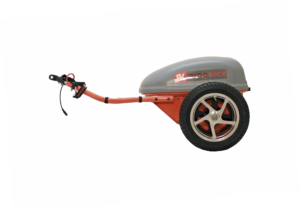 This is a press release from Ridekick International.

Fort Collins, Colorado – Ridekick International, a Colorado-based company, is returning to Interbike for its third year to showcase the company and its products on the exhibit floor.

The company’s product, the Ridekick power trailer, has been in the market over a year, and the team is back at Interbike to continue growing sales channels, introduce a longer-range lithium battery, and celebrate their launch into the Australian market and recognition as one of Entrepreneur Magazine’s 100 Brilliant Companies.

The Ridekick power trailer is the first commercially-available electric-powered bicycle trailer. It blends the design of an electric bicycle with a bike trailer, letting a bicyclist ride through town, over hills, and through head winds at speeds up to 19 mph without pedaling.

The Ridekick power trailer easily attaches to most bikes in minutes and can be unhitched in seconds for traditional riding.  With a lockable storage compartment that can hold up to 42 liters of cargo, the rider can now use a bicycle-equipped power trailer for transportation and leave the car at home.

The sealed lead-acid battery-driven motor boosts the biker for 10 – 12 miles on a single charge, allowing the rider to get around town for a few cents per battery charge.  As a result of their activity at Interbike 2011, Ridekick International was able to build its dealer base from 15 dealers in seven states to 90 dealers in 26 states across the United States.

International interest has also grown over the past year. Individual units have been sold in eight different countries, and the first international distributor is launching this week in Australia.

In response to market requests, Ridekick International added a 20 Ah LiFePO4 battery to its product line. “This battery supplies power at 19 miles per hour for a range of 25 – 30 miles on a charge, and offers about 45,000 miles of support over the life of the battery,” said Don Eason, Senior Engineer with Ridekick.

“For about two cents per mile, daily riders can pay for the Ridekick trailer with lithium battery in a year or two. Then, the next several years of riding are fuel-cost free!”

“To be selected with no award application process is a true, pure honor. The Ridekick trailer is so unique and customers love the ability to simply add electric power to their favorite bikes. The impact to transportation and cycling is brilliant!” Wanger continued.  Ridekick International was founded by Mark Wanger in 2009.

Wanger became interested in taking the sweat out of his bicycle commute to local sustainability organization meetings in Fort Collins, Colorado.

“The vision of Ridekick is to provide an affordable way for people to enjoy bike riding as a mode of transportation and leave the car in the garage. Fifty percent of our trips taken by car are less than four miles from our home bases, and bicycling is the fun and healthy alternative to driving,” said Wanger.

The Ridekick power trailer is designed and manufactured in Fort Collins, Colorado, and is sold through independent bicycle dealers throughout the United States, and now, Australia.

Online purchasing, through the company’s website ridekick.com, is also available to customers not served by independent dealers.

Ridekick is also a member of Bikes Belong, which is sponsored by the U.S. bicycle industry and has the goal of putting more people on bicycles more often, and was awarded silver-level partnership in ClimateWise, a voluntary, energy awareness and reduction program run by the City of Fort Collins.

To learn more about the Ridekick power trailer at Interbike, stop by the Ridekick booth located at booth 40070 on the lower level by the electric bike test track.

The company will be fulfilling its philanthropic mission by donating $1 to Ride for Reading for each test-ride taken of the Ridekick power trailer at the electric bike test track.