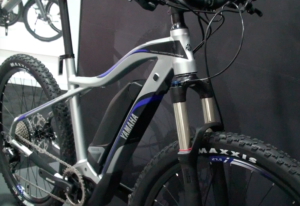 Its that time of year again for the launch of new electric bikes!

This years Interbike (largest bicycle tradeshow in North America) was a big show for eBikes.

In this series of reports from Interbike you will get an in depth look at many of the new 2018 eBikes and learn more about the companies that are involved in the North American electric bike marketplace.

And make sure you also checkout these other reports:

So Many New BULLS eBikes

BULLS is rolling out a huge line of new electric bikes for 2018. There is the large selection of eMTBs with Bosch, Shimano, Brose. Checkout the new Twin Core Shimano battery set up and Bosch Powertube internal battery. They also have eFat, eCommuter, eCruiser, and eKids bikes. Also featured is the new Monkey Link magnetic accessories.

Jonathan Weinert from Bosch eBike Systems show off the latest improvement for 2018. The Active Line and Active Line Plus systems are now smaller, lighter, quieter, and they don’t have any resistance when pedaling after the assist stops. Also featured is the new Powertube internal frame battery with 500 watt hour of capacity.

Here’s a look at the latest electric bikes from eProdigy. The Fairweather is a light carbon fiber folding eBike, the Magic is their new step thru with integrated frame battery, the Banff step thru is their cruiser style eBike, the Logan is a solid commuter, and the Jasper has a very low step thru area.

Ross Evans, founder of Xtracycle, shows off their latest step thru Edgerunner with 2 Bosch batteries! You can also select which Bosch mid drive motor; with the Performance Line CX or the Speed motor. Plus there are new accessory features that Ross demonstrates.

And make sure you also checkout these other reports: