EVELO makes it into the Bicycle Hall of Fame!

Wow!  An electric bike to be displayed at an “organization dedicated to recognizing American competitive cyclists and contributors to the sport for their significant achievements” (from U.S. Bicycling Hall of Fame website).  Electric bikes must be making some headway in the world!

EVELO is the brand of bike that will be displayed in the hall of fame and their Luna model just arrived at Electric Bike Report for testing and review.

Here is the press release with all of the info:

Brooklyn, NY — July 17, 2012 — EVELO, Inc., a New York City-based electric bicycle company, announced today that one of their electric bikes will be displayed as part of an exhibit at the U.S. Bicycling Hall of Fame located in Davis, California.

The bike, one of three models currently manufactured by EVELO, is a pedal-assist electric bike equipped with a NuVinci® N360™ drivetrain, can reach speeds of up to 20 mph on electric power, and is powered by a lithium battery with an estimated battery range of 40 miles. The rider can switch between pure pedaling, pedal-assist, or electric-only modes.

EVELO electric bicycles were recently used for the Trans-American Electric Bike Tour, where two riders travelled on a 3,700 mile journey from New York to San Francisco using the bikes. The tour lasted from April 7 until its completion on June 20. Coinciding with Earth Week in April and Bike to Work Week in May, the tour helped raise awareness of how electric bikes can make cycling more accessible to a wider range of population.

U.S. Bicycling Hall of Fame was one of the destinations along the tour’s route where the team has conducted a presentation about electric bikes. Now that the tour is complete, the bike will return to the Hall of Fame to take its place in the exhibit. 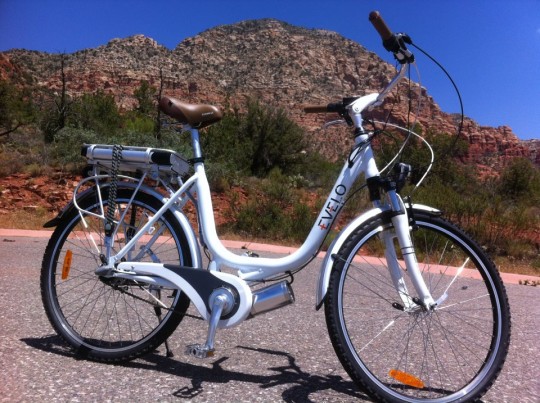 The EVELO Luna electric bike that is in for testing and review at Electric Bike Report.

Boris Mordkovich, co-founder of EVELO, said of the announcement, “We are thrilled that the U.S. Bicycling Hall of Fame has decided to feature an electric bicycle in their exhibit to represent the evolution of bicycle technology. We hope that the presence of an electric bike in the Hall of Fame will encourage more people to consider cycling regardless of hills, distance or other barriers that often preclude people from getting on the bike.”

The bike is expected to go on display at the US Bicycling Hall of Fame beginning this month.

Based in New York City, EVELO Electric Bicycle Company develops long-range, stylish electric bicycles for recreation and commuting. Their mission is to get more people cycling more often by making bicycles accessible and simple to use. Learn more about EVELO here.

About US Bicycling Hall of Fame

The US Bicycling Hall of Fame was founded in 1986. In 2008, it moved to Davis, CA, a city designated as a “Platinum” Bicycle Friendly Community by the League of American Bicyclists. The organization is located in an 8,000 square foot building in downtown Davis and includes a large collection of bicycles, photographs, awards, posters, periodicals, and racing apparel from the 19th, 20th, and 21st centuries. To find out more about the US Bicycling Hall of Fame, visit their website here.

What do you think?  Do you have friends and family that would consider riding a bike more if they didn’t have to worry about hills and wind?  Please leave your comments in the section below.