Pedego claims the number two spot.  But who’s number one?  U.S. pedelectric bike maker claims that in just two short years, it has grown to become the second largest maker of e-bikes in the US.  Pedego was the combined efforts of two baby boomer entrepreneurs Don DiCostanzo and Terry Sherry both with a vision to differentiate Pedego from all other e-bikes. They achieved this through sleek styling, advanced technology, top-of-the-line components and comfortable designs. The Pedego brand offers fun for people of all ages with a specific emphasis on the 40+ market. The zero-emissions bikes offer up to 30 miles per charge and pose significantly lower environmental impact than cars.

According to Pedego CEO, Don DiCostanzo, “We always knew that the best way to get people back on a bike was to create a comfortable ride with reliable parts and components. Everything from the Shimano gears to triple-coated durable finishes are among the best available in the industry. Our bikes are top-of-the line which is the main reason Tommy Bahama chose Pedego to design their line of electric bikes. Pedego offers Comfort Cruisers with powerful brushless, gearless hub motor and lightweight removable lithium battery pack that can run up to 30 miles per charge and can be recharged in about an hour. In addition, Pedego also has the Interceptor e- bike with a 500 watt, 48-volt battery and a proprietary electromagnetic motor. We will also be introducing new concepts at this year’s Interbike, September 14-16 in Las Vegas.”

Pedego recently signed two prominent distribution agreements with Clean Wheels, Ltd for all of Europe and Voltage Bikes of Canada. 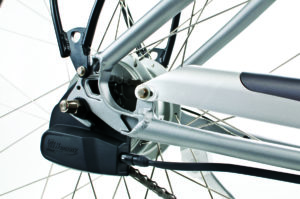 A new automatic transmission hub motor from Nuvinci.  According to Gizmag, Fallbrook Technologies, the originator of the hub motor with a continuously variable transmission, now has a new model coming to market, the  NuVinci Harmony – which is an auto-shifting version of the N360 aimed specifically at e-bikes..  Fallbrook Technologies released the NuVinci Continuously Variable Planetary (CVP) N170 transmission for bicycles in 2007. The rear hub-based system does away with distinct, defined gears, it’s sealed against dirt and other contaminants (unlike a derailleur), and it allows riders to change drive transmission ratios even when standing still. Last year, the company unveiled the NuVinci N360, which is smaller and lighter than the N170, yet has a wider range of ratios. Fallbrook has now announced yet another incarnation of the technology – The Harmony, which is intended for use with 12-48 volt e-bike systems, automatically adjusts the drive ratio in order to maintain the cyclist’s preferred pedaling cadence. If you’re going up a hill, for instance, it will shift into a lower ratio, so that it’s no more difficult to turn the pedals than it was on the flats.

There are two handlebar-mounted controllers available for the system. The Base Controller simply allows riders to chose between three speeds of automatically-maintained cadence, with the push of a button. These will be preset by the e-bike manufacturer itself, as dictated by the gearing and other parameters of the bike. Typically, however, the cadence choices would consist of fast, medium and slow.

On the Advanced Controller, users can find the exact cadence that they prefer, then instruct the system to maintain it. Should they wish, they can also switch over to manual mode, and adjust the ratio themselves. The hub interface itself weighs 250 grams (8.82 oz), and has a quick-release attachment for easy wheel removal. Fallbrook Technologies’ NuVinci Harmony CVP should start appearing on e-bikes in the EUR 2,000 (US$2,864) and up price range, starting early next year.

Britain’s Heir to the Throne Tries an e-Bike – but doesn’t realize he needs to pedal.

According to the London Evening Standard,  Prince Charles rode an electric bike at an event at Clarence House but was surprised it had to be pedaled: like many people, he expected an electric bike to be self-propelled, like a moped. Ross Lydall of the Evening Standard said: “After a bit of a wobble, [Prince Charles] parted the VIP and media scrum and rode up and down the garden – albeit with a bit of a detour on to the grass.”The bike he rode at the media launch of the Start Eco Festival was a Spencer Ivy, equipped with a Brooks saddle.

Va Hua of Spencer Ivy said: “He [Charles] thought it would go like a scooter – that is a common misconception. The great thing about the electric bike is that it’s classified as a standard bike, so you don’t need insurance or pay a road tax” 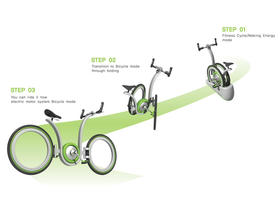 One Bike Concept – a folding electric and exercise bike.  According to BikeRadar, two South Korean designers have come up with a design  that combines two pedal powered activities into one: a stationary/exercise bike, as you might ride in a spin class, which once folded out from its cradle is an electric bike.  The idea is that while riding the bike in its cradle you’re charging up the battery ready to buzz round town when the bike is in e-bike mode. There are no details on how long you’ve got to ride to fully charge the batteries, but with no additional power needed, the bike should be greener than a standard e-bike.  At the moment it’s a concept designed by Byoung-soo Choi and Jun-kyeong Ki from Hoseo Univerity, Korea, and it’s just won a 2011 Spark Concept Design Award silver prize 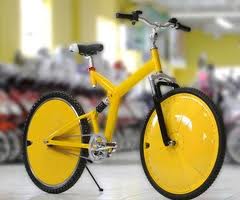 Daymak’s Shadow ebike: wireless and green transportation in one package – according to Gadget Review, this prototype was designed as a solution for easier and greener transportation in overcrowded metropolitan areas, the Shadow eBike is the first wirelesspower-assist electric bike in the world. To make the eBike wireless, Daymak uses a ISM 2.4 GHz wireless system, using frequency-hopping spread spectrum technology, which may prevent interference. This means the bike has no brake, gear cables or any wires on its frame, thus eliminating any chances of accidents due to short circuiting or the like. All of the bike’s circuitry is inside the frame, with the wireless system connected to a what the company calls “Daymak Drive,” which controls the electric motor (either a 250W or 350W motor), magnetic regenerative brakes, throttle and pedal-assist functions. All these are located in the front wheel of the bikes, which also houses a 36V 10AH Lithium battery, rechargeable USB port, charging port and an LED battery power display. So really, all the important stuff is located inside the front wheel, which features a custom-made fork to hold it since there aren’t any conventional bike forks wide enough to hold it all! While users can easily pedal their way around town, the electric motor and lithium-ion battery provides energy for up to 15 miles, but using the pedals increases the range to about 25 miles. The battery recharges in about 5 hours, and it can be recharged for 750-800 cycles. Thanks to its built-in USB port, the Shadow eBike can also act as a generator and charge any of your other electronic devices, such as your phone, MP3 player and anything else you’d like to take on your ride.

With modern design cues and its bright yellow color, the Shadow eBike will definitely turn heads as you take on the concrete jungle! Pricing is set to be at $1,999 and you’ll have to send an inquiry regarding availability.