Forbes reports that an intriguing solar e-wheel kit is to be premiered at the forthcoming Consumer Electronics Show in Las Vegas. Apparently it will be exhibited by French firm Rool’in, but unfortunately details are brief.

Rool’in’s website only currently details its conventional kits which come in three wheel sizes, 20″, 26″ and 28″.  The website boasts 5 minute fitting, Samsung batteries and a range of bewteen 30km and 50km depending on the wheel size used.

The kit is compliant with EU bike laws, coming with a pedelec sensor (the sensor can be bought as a separate kit to fit to a second bike, so the wheel can be swapped over quickly and easily). Prices are from €615. Here’s a video with a look at the Rool’in:

The idea is certainly not new; EBR reported on a Dutch prototype earlier in the year, though Rool’in appear to be one of the first companies to commercialise the idea.

And here is a guide to all-in-one electric bike wheels.

The Huffington Post is a hugely popular news site (it actually won a Pullitzer Prize for its journalism) and it recently espoused the merits of electric bikes, after the author attended the Santa Monica, CA Electric Bike Expo. It’s an overwhelmingly positive overview of e-bikes and the author shows real interest and knowledge with his run-down of several leading makes.

Chris Evans is a well-known UK celebrity (he has a popular radio show) and is actually more associated with cars than electric bikes. But the Daily Express recently reported how he had his GoCycle stolen only for it to be recovered nine months later and on the other side of Europe in Lithuania.

Evans was quoted as saying “Whoever stole it switched it off and must’ve thought it was safe enough now to turn it back on again.”

A high profile and ultimately positive advert for GPS ‘stolen bike recovery’ tracking now offered by some e-bike manufacturers. The article quotes GoCycle as saying “Two lost bikes have already been located via GPS and returned to their owners.”

And there is a way to add GPS tracking to any bicycle.

It wasn’t too long ago that the UK’s leading ‘bricks and mortar’ bike retailer Halfords only stocked a single brand of e-bike and their PR machine resolutely shied away from mentioning them. How things change. With the acquisition of Tredz and Wheelies, Halfords now promotes a huge range of e-bikes online.

For their latest e-bike PR strategy they have taken to Youtube to promote the virtues of their folding e-bike which currently retails at a very keen £499.

‘Connected biking’ specialists COBI have announced the rollout of the latest features for their system. Before launching into the detail, if you aren’t aware of what COBI does check out the EBR video here for an overview:

COBI will now feature Komoot mapping on their system, a vector based mapping system that is quickly downloadable and so doesn’t need downloading ‘on the fly’ which can lead to delays displaying digital mapping.

The crew from Motostrano electric bike shop in San Francisco and Redwood City is currently adventuring in Death Valley.

Day Three of our Ebiketreks Death Valley tour. When you have the right bike you can do almost anything. Made it to Daylight Pass just at the end of day light. From there it was 4300 feet of paved downhill flight to the valley floor. Will have to do the Titus Canyon loop another time as we started too late. @haibikeusa #haibike #biketravel #ebike #deathvalley #ebiketreks #daylightpass #california #visitcalifornia @electricbikereport

Santa Barbara’s Noozhawk reports on the positive effect of e-MTBing for older rider Ron Noe and Noozhawk correspondent Ray Ford. I’m not sure what’s most impressive, the retrofit job achieved by Noe or the fact that Ford has two titanium knees and a titanium hip and was still able to tackle the Californian back country on an e-MTB…

Finally here’s some festive Bavarian snow courtesy of ebike-mtb.com. This interesting article describes ascending a well-known Bavarian trail on e-fat bikes until the snow gets too deep. There’s also a good little summary of what constitutes an e-fat bike. With their wide tyres they look ideal for snowy and icy conditions.

EBR has carried many stories of how great high quality cycle lanes are for promoting use and sales of bikes and e-bikes. So it was a disappointment to see Canadian city Calgary actually debating whether to remove an existing network. 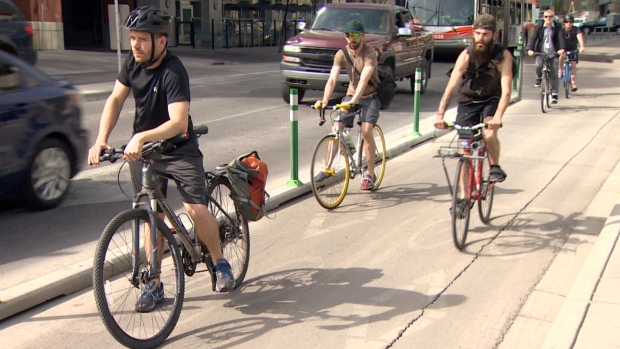 Thankfully the vote has gone the right way, and the ‘pilot’ network has now been approved based on public consultation. Perhaps most encouraging was the apparent public support: Mayor Naheed Nenshi said he thinks the cycle track network was a false controversy, pointing to the fact he got 850 emails to his office, 825 of which were supportive of the project.

Cycling Industry News also reports that Gazelle appear to be looking at long term leasing as a way of making e-bikes available to the public, rather than the traditional outright purchase method.

An accident involving a farm worker, a tractor and a ladder might just have insurance implications for e-bikes in Europe. In a case seen in the European Court of Justice (Damijan Vnuk v Zavarovalnica Triglav) a ruling was delivered that, in short, means EU states may be required to implement compulsory insurance on all motorised vehicles, regardless of their intended use and that potentially includes electric bikes.

The UK’s Department for Transport has issued a consultation document on the case as reported here in Cycling Industry News.

Bike Europe reports that tyre manufacturer Kenda are shifting the emphasis of tyre producton to e-bike models, in particular focusing on e-MTB specific models and the use of their patented K-Armor anti-puncture technology.