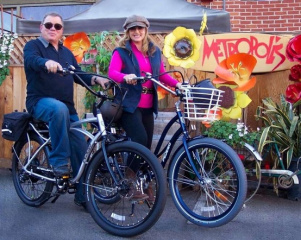 Mashable did a nice feature on the stylish and simple Faraday Porteur.  The Porteur is a clean design because it hides the batteries in the top tube and the wires are also concealed in the frame.

Falco E Motors is new to the US Market and here is a preview of their new electric bike kit with a wireless display!

The new Prodeco Outlaw SS electric mountain bikes are starting to roll off the assembly line in Pompano Beach, FL.  Speaking of Prodeco, here is my report from a recent visit to the Prodeco assembly facility.

Invented by a former road motorcycle racer, the RoadRACe Power Pod is an easy way to add electric assist to a hand cycle or tricycle.

An eZee electric bike rides up the famously steep hill of Baldwin Street in Dunedin New Zealand (see below!).

Here is another e-bike article from New Zealand.  The author initially was a little skeptical of e-bikes but after some time in the saddle of a Pedego he changed his tune!  Great article on what its like to experience an e-bike ride.

Currie Technologies recently moved their headquarters to Simi Valley California.  “The building is encompassed by a bike path that runs from one end of the valley to the other.”  Sounds like a great move!

An electric bicycle that goes up to 80 mph?  Yes, you should check out this article about the Hanebrink X5.

Here is a view from my e-bike test route, not bad!  The full review of the E-Bike Kit will coming out soon.