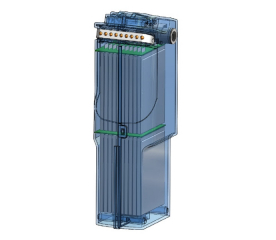 This is a press release from Energie Cycles.

Las Vegas, NV – With reports of dramatic growth within the electric power-assist bicycle market, one of the most important components often overlooked, are the lithium battery packs. Considered the most expensive component on today’s leading e-bikes, the rechargeable power source is an outsourced part for all except Energie Cycles.

As the only US based e-Bike builder with a direct link to the company’s own lithium polymer cell manufacturing center, the emphasis for Energie Cycles is to deliver a top performing, durable and feature-laden battery pack that out performs traditional e-cycle power sources.

Continuing to be the only “Built In America” production e-bike line with a 36 volt, 16 AH pack that offers 576 watt hours of power, three of the four models in the line use this power to drive the Bafang 250, 350 and 500 watt brushless motors. With this new polymer, the company continues to push the cycling distance envelope on a single charge.

The newest pack is based on B&K’s advanced “Hard Polymer” flat, aluminum pouch batteries. Similar to the power source found in today’s ultra-thin consumer electronics, the twenty advanced high energy density lithium polymer cells built into the Energie Cycles pack are connected to one of the most advanced Battery Management System circuit boards ever put in an electric bike.

The RPE facility located in Las Vegas, is staffed by seasoned electrical, mechanical and firmware engineers who are loaded with motor control experience. The strategic partnership with Texas Instruments an Arrow Electronics also helps provide the development team with access to advanced chip technology for features not often seen in traditional lithium pack solutions.

The new Energie Cycles battery pack includes a fully programmable, intelligent TI microprocessor on the main board. For the rider, the pack includes much requested features such as a USB port to power cell phones, GPS devices, mp3 players and other consumer electronic accessories. The system is capable of handling the iPhone as well. A second power port allows the connection of additional LED lighting for greater visibility in urban commuter settings.

According to Mike Horan, RPE’s CTO, “The new microprocessor can be flash upgraded through the USB port as we develop more diagnostic features that reach into the Bafang motor and controller package.”

The pack has also been upgraded to make use of the built-in Smart Sensor that lets the rider connect a second Tubus rack-mounted battery for extended range. The upgrade eliminates the second connecting port from the previous model and allows the rider to simply plug it into the same charge port.

A new “Power Stasis” feature reduces the battery’s natural discharge while in storage by more than 50%. This means the bike will retain the charge capacity longer in between rides.

The Energie Cycles battery pack also has a built-in LED tail and brake light. The brake light is activated by the switches in the brake handles and the tail light utilizes a light sensor that automatically turns on the light (while riding) at dusk.

For dealer service and maintenance, the USB port doubles as a diagnostic tool that when connected to a Windows PC will let the dealer see the charge health of the individual polymer cell pairs as well as the overall charge cycles. The pack design actually allows for individual cell replacement, potentially extending the overall life of the pack.

All Energie Cycles include a 2-year limited warranty which includes the battery. A fourth generation Bluetooth communications option will be shown in the company’s facility in Las Vegas during the upcoming InterBike show.

The battery packs are paired with a UL approved 36 volt DC Fast AC Charger that delivers up to 7A output. The display gauge shows both normal and fast charge status.

Energie Cyclestm – Is a trademarked brand of “Built In America” electric power assist sport bicycles under Rechargeable Power Energy North America, LLC. The line utilizes top brands and sources products from leading suppliers which are shipped to Las Vegas for assembly. The company provides sales and technical support to its dealer network from the 12, 500 square foot facility. The line will be on display in booth 4021 at InterBike 2013. The website for the line is www.energiecycles.com

Rechargeable Power Energy North America, LLC – is a leading portable power research, development and testing facility based in the US to deliver advanced battery pack design for Shenzhen B&K Battery’s global sales and distribution network. The extensive staff of engineers and designers work with clients around the globe to develop primary and rechargeable power solutions for a wide range of products. The website for the company is www.rechargeablepowerenergy.com