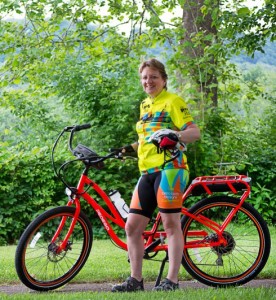 Cathy Rogers, 57, of Pittsburgh, PA will be riding her Pedego Interceptor electric bike 3,300 miles in The Big Ride Across America!

Cathy and 13 other riders will raise $6,500 each and ride from the Seattle WA area to Washington D.C. in support of the American Lung Association.

The Big Ride Across America will take place from June 16 to August 2, with 40 days of riding and 8 days of rest.

The tour will go through Washington State, Idaho, Montana, Wyoming, South Dakota, Minnesota, Wisconsin, Illinois, Indiana, Ohio, Pennsylvania, Maryland, and then to DC. Here is a link to the full tour route.

At up to 100 miles per day, Cathy will need to use her electric assist sparingly and/or swap out batteries.

The Pedego Interceptor does have a pedal assist feature with multiple levels of assist and a twist grip throttle for added “boost”.

Cathy is no stranger to the bike scene.  She is the founder of Aero Tech Designs, a clothing company by and for cyclists.

For the Big Ride Across America, she will be wearing an Aero Tech Designs kit with neon green, yellow and orange to complement her orange Pedego bike and for enhanced visibility during the day and reflectivity for low light conditions in the morning and night.

Cathy is also an experienced bike tourist.  She has done a tour from Tampa, Florida up the east coast to Cape Cod Massachusetts. And that is in addition to bicycle touring through eight European countries!

Cathy has special plans for this tour that include sharing a special dance routine with people along the way and then posting videos of the dancers on her company Facebook page.

Pedego is Cathy’s official bike sponsor for the Big Ride Across America.  This is what Cathy likes about her Pedego Interceptor “I just love the upright position of the bike’s design.  All the pressure on the back of the neck is removed as well as numb hands.  I carry my weight on the two ischium bones that are well situated on the bicycle saddle to support my weight.  Visibility in enhanced with the Pedego bicycle’s florescent orange color.  My new Pedego bicycle has a built-in front headlight and red rear tail light.”

Here is a video with Don DiCostanzo, President of Pedego, showing off the Pedego line of e-bikes including the Interceptor:

You can follow Cathy’s Big Ride Across America at the Aero Tech Design’s Facebook page and on their blog. 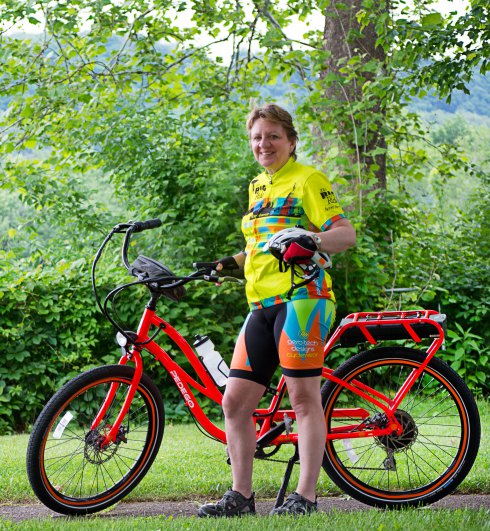 Electric bike touring /adventuring is becoming popular.  Here are some other stories about e-bike adventuring: