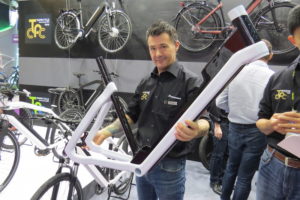 In this third part of the Taipei Cycles Show highlights there are more fat e-bikes hitting the market, the rise of Shimano STEPS, a look at the Yamaha mid drive, new eflow e-bikes with the Continental mid drive, Diavelo carbon e-bikes, and the new Eden e-bikes. 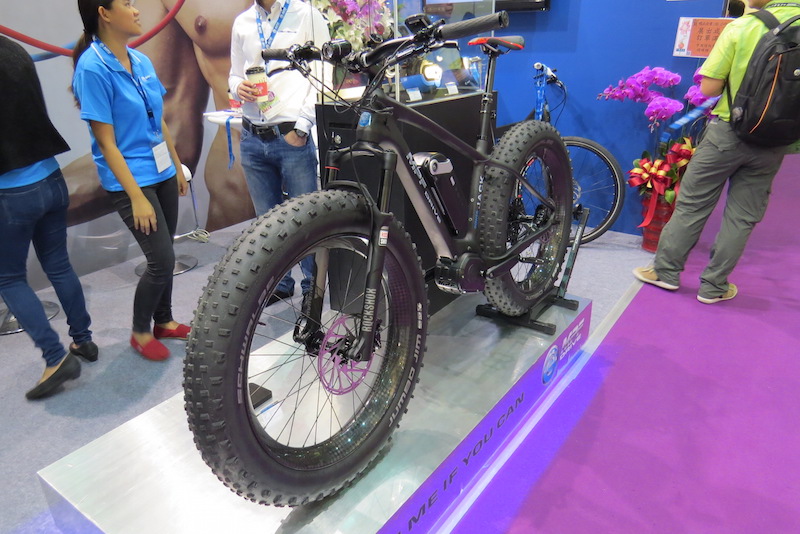 MPF Drive had this fancy carbon fiber fat bike to showcase their mid drive system. MPF Drives can be found on a lot of e-bikes: Visiobike, LEAOS, Butchers & Bicycles, and more. 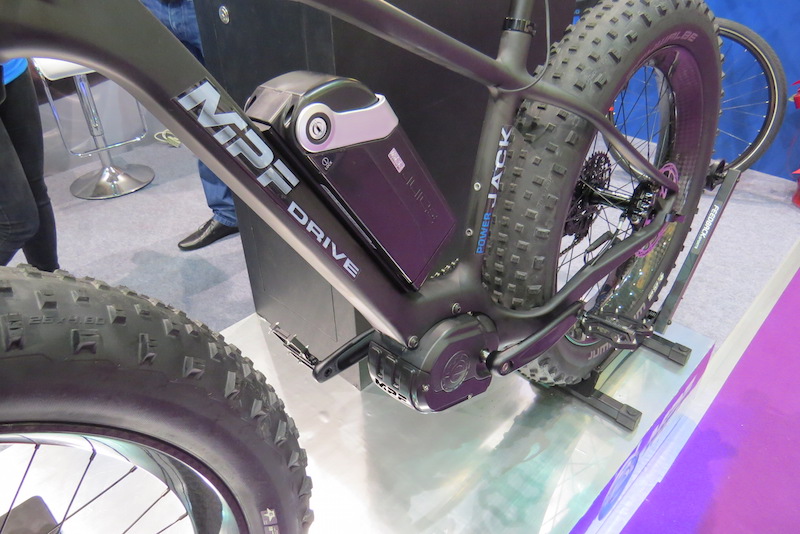 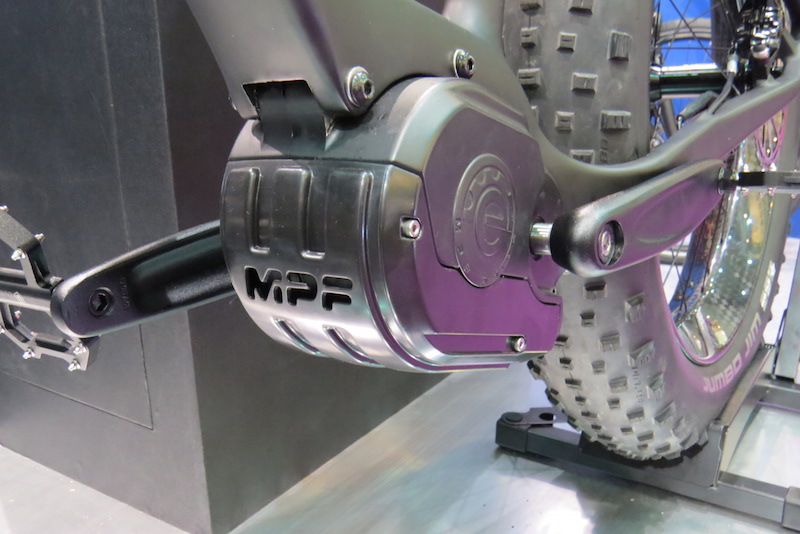 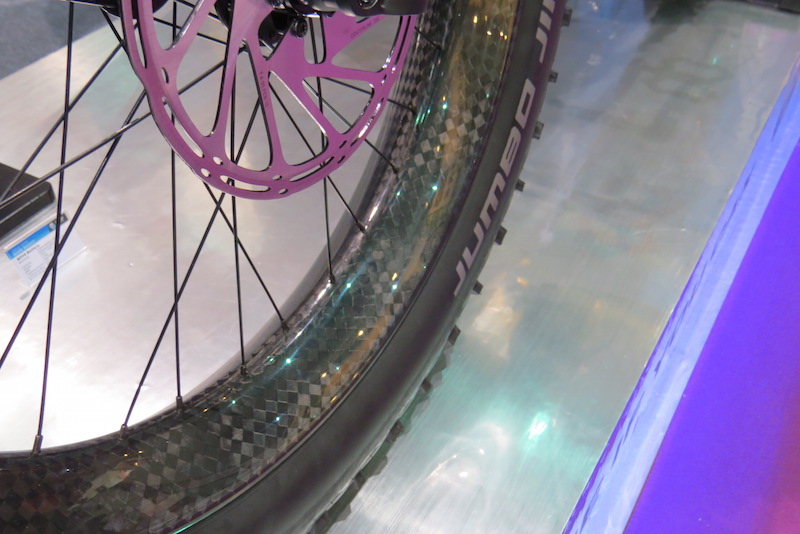 To add some bling to this carbon fat bike, MPF went all out with carbon fiber fat rims. This fat e-bike is not cheap! 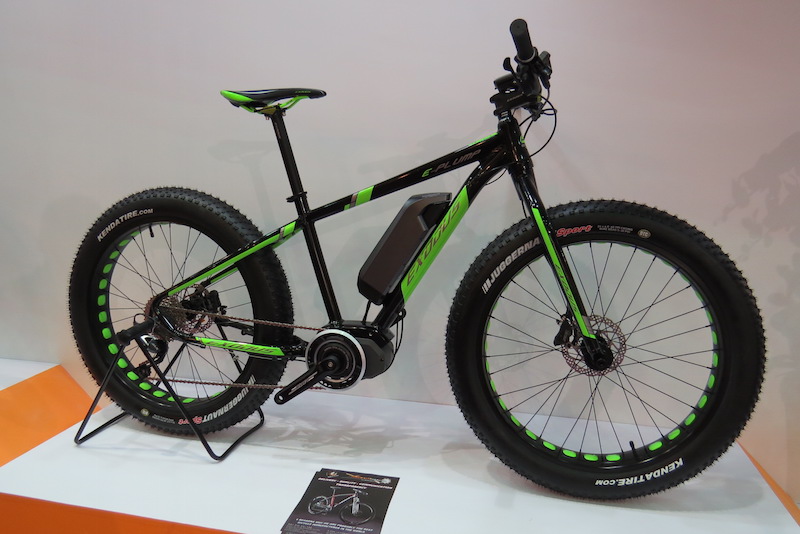 And there were quiet a few fat e-bikes at the show. This is from Exodus and it is using the Shimano STEPS system. This is a brand that probably won’t be available in the U.S. 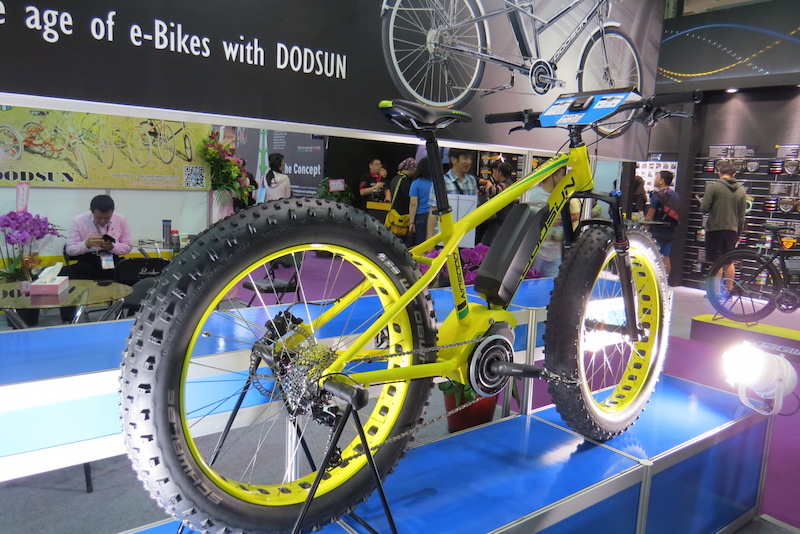 And this one is from Dodsun and it also uses the Shimano STEPS mid drive system.  There were a significant number of e-bikes at the Taipei show that were using the Shimano system. 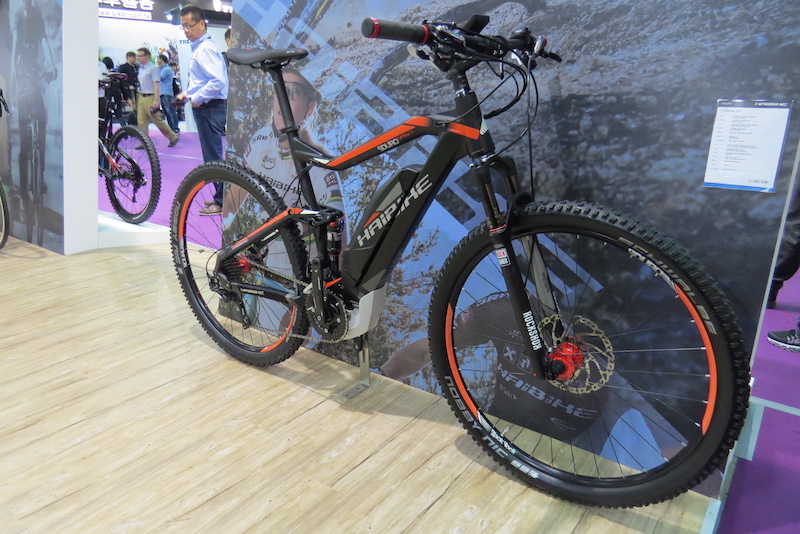 This is the Haibike Full Nine RX with the Yamaha mid drive system. For now this is only available in select European markets. 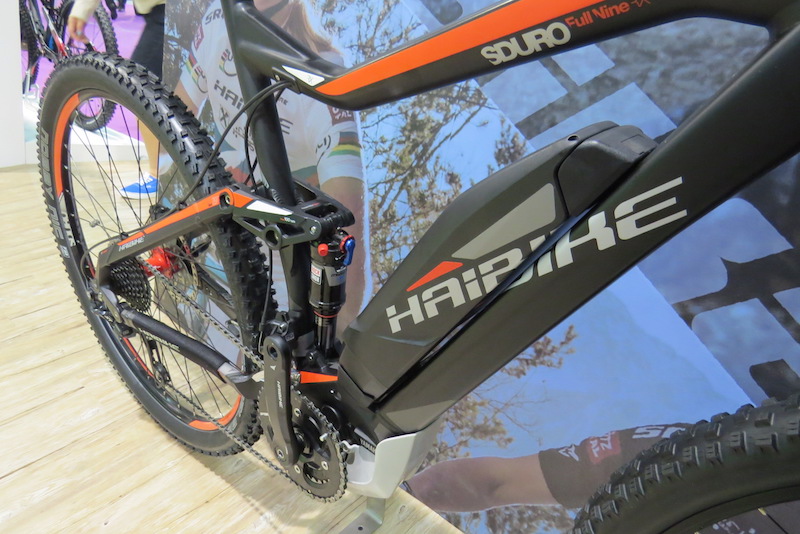 A closer look at the Yamaha 36V 11ah (400 watt hour) lithium battery. Haibike added some style with their graphics going from battery to frame. 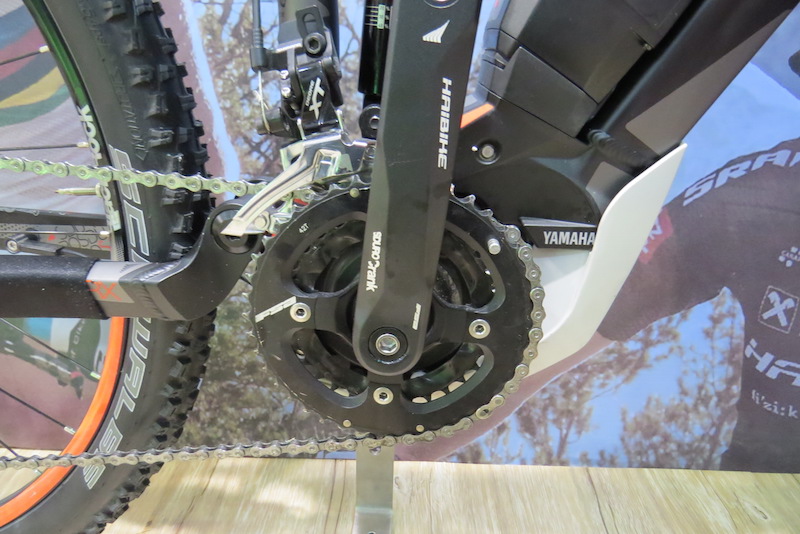 And here’s a closer look at the Yamaha 250 watt mid drive motor. The Yamaha system comes with 2 chainrings which differentiates itself from the Bosch and Shimano systems that only use 1 chainring. 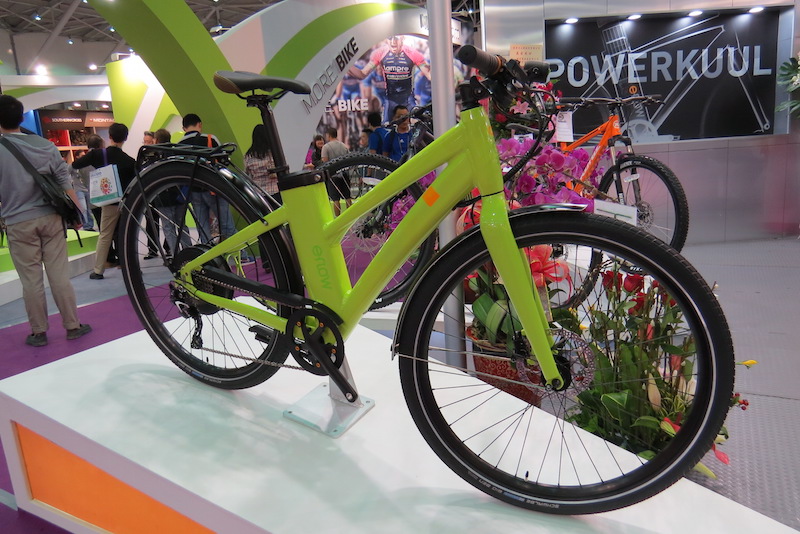 eflow showed off a new design with the battery in the downtube and a traditional seatpost size. 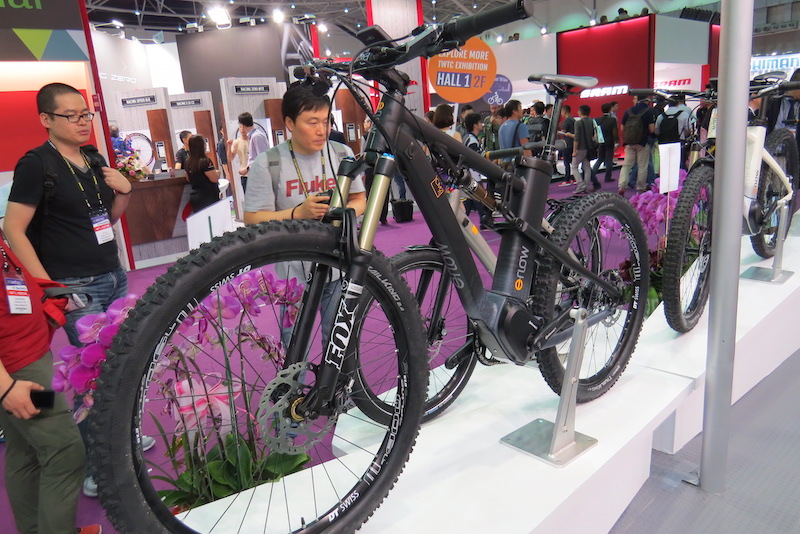 In addition they had some e-mtbs on display. This is their full suspension design that uses the Continental mid drive system and the battery in the downtube. 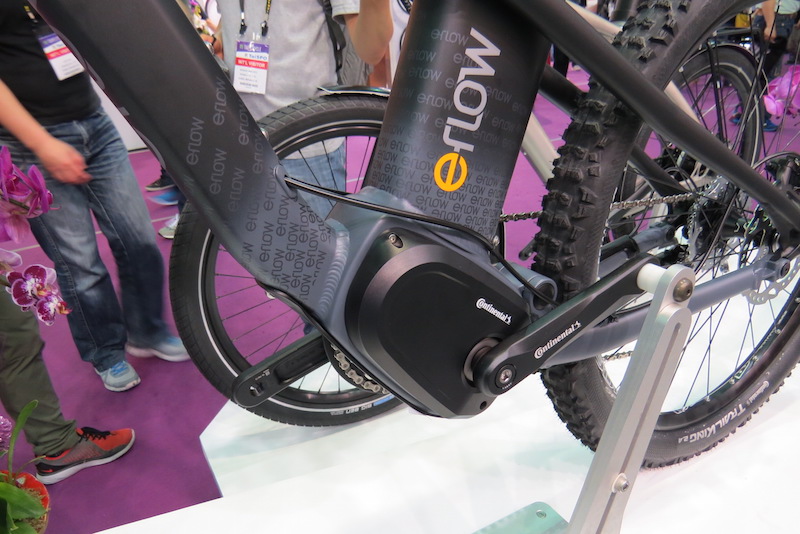 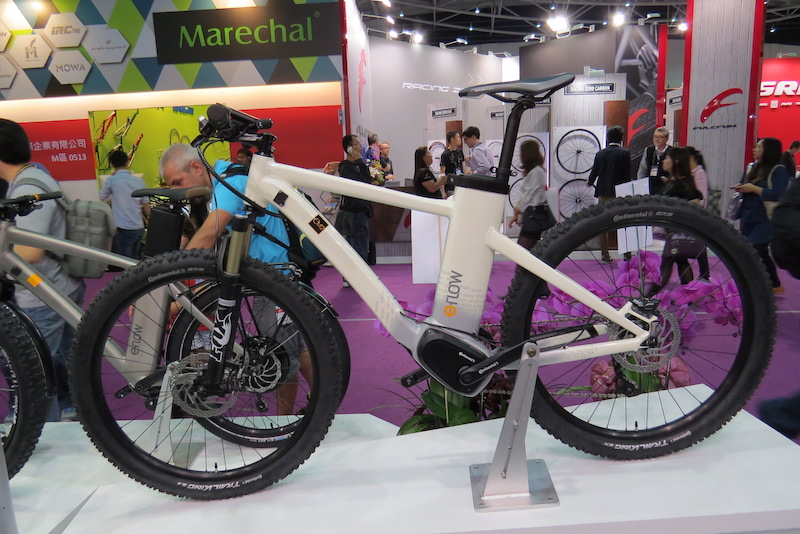 And this is the eflow hardtail electric mtb with the Continental mid drive. 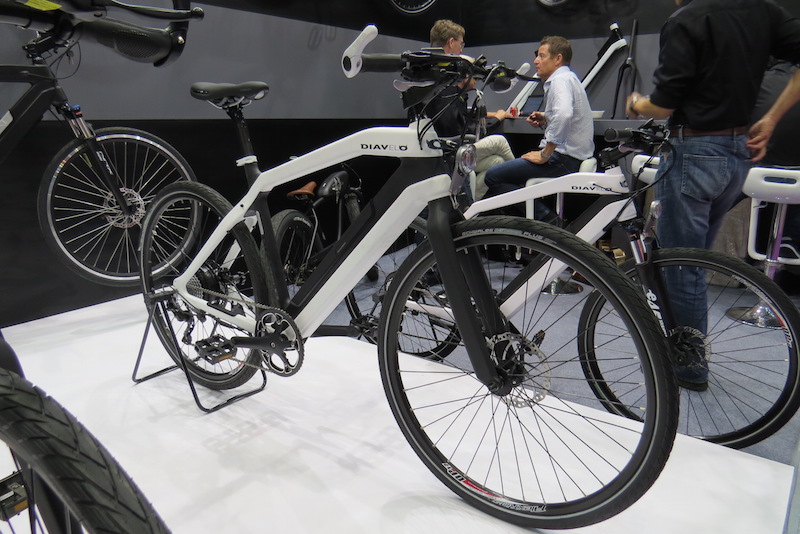 Diavelo/Protanium had this carbon fiber speed pedelec (up to 28 mph) on display and they claim that it is one of lightest speed pedelecs in the world. It has a carbon frame with a “layer of Kevlar fiber to give the frame additional strength to handle the forces from the powerful carbon fiber/aluminum motor”. This bike won an iF Design award at the Taipei Cycle Show. 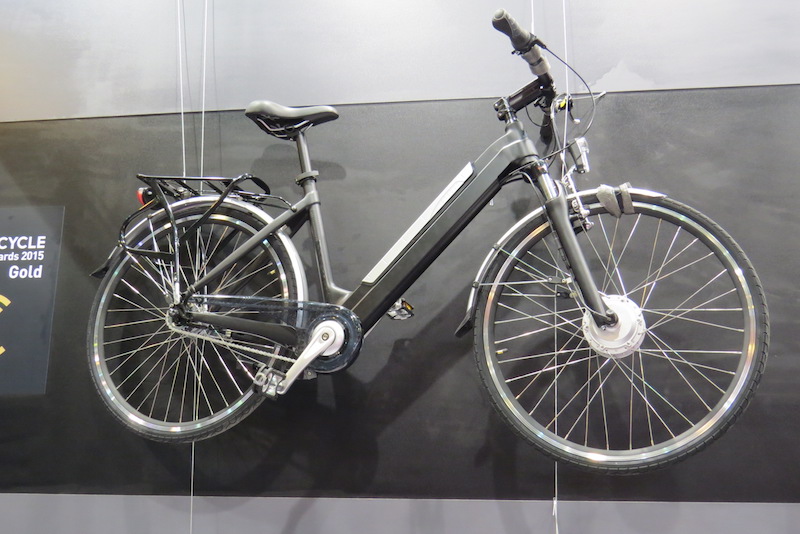 And here is a look at the step thru carbon fiber frame bike from Diavelo/Protanium. 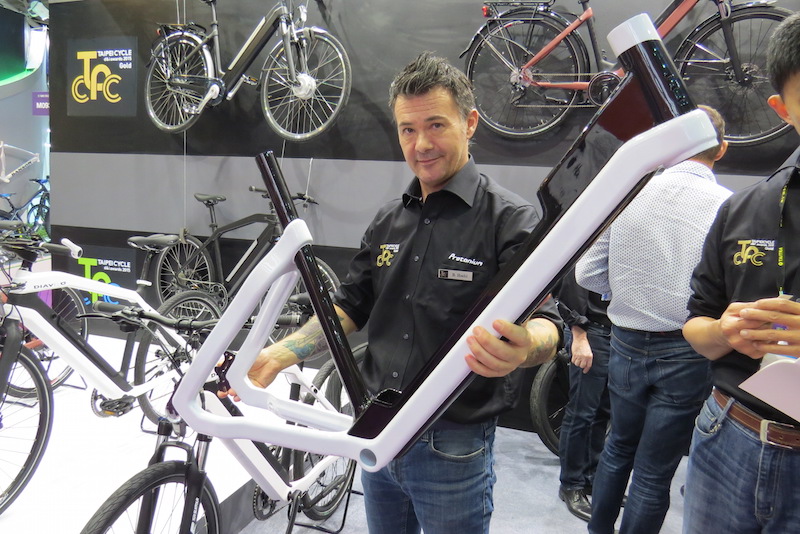 Brian Hoehl (designer of the bikes) shows off the carbon step thru frame that houses the battery in the downtube. It looks light! 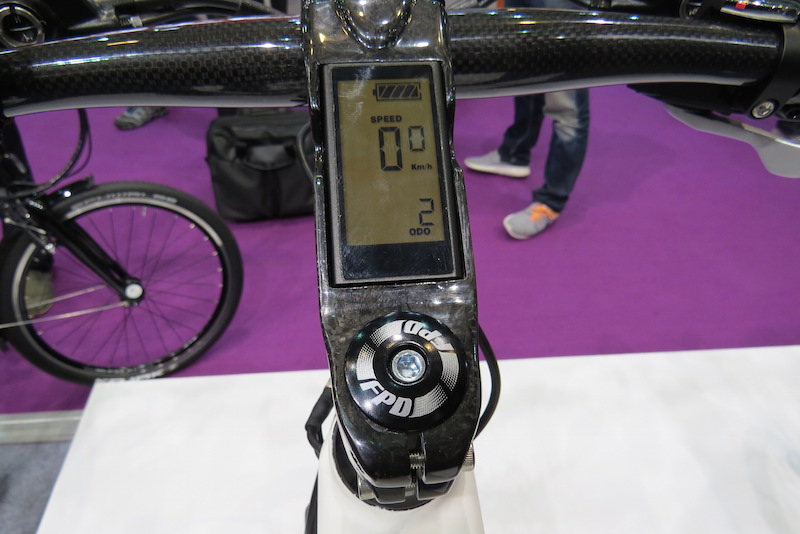 This is the new integrated stem display on the Diavelo/Protanium bikes. 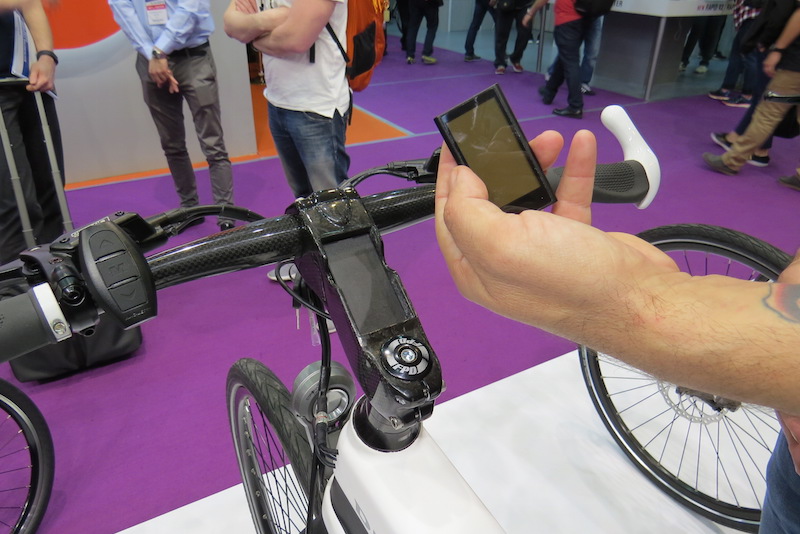 The display acts as a key to the bike. When it is removed the bike won’t work. The carbon stem provides inductive charging to the display. 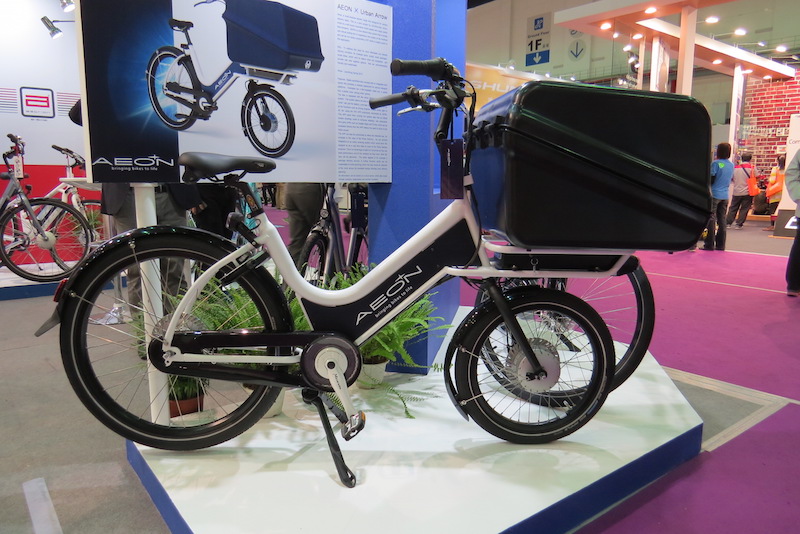 Aeon had this e-cargo bike on display. They put everything up front: the cargo box, battery, and motor. 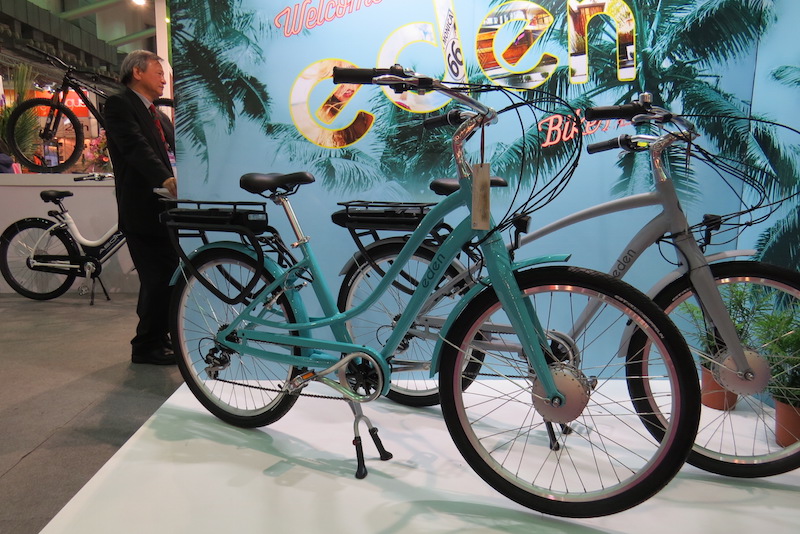 Eden is a brand that will be in the U.S. soon. They are providing this cruiser style e-bike with a traditional triangle frame and a step thru frame. 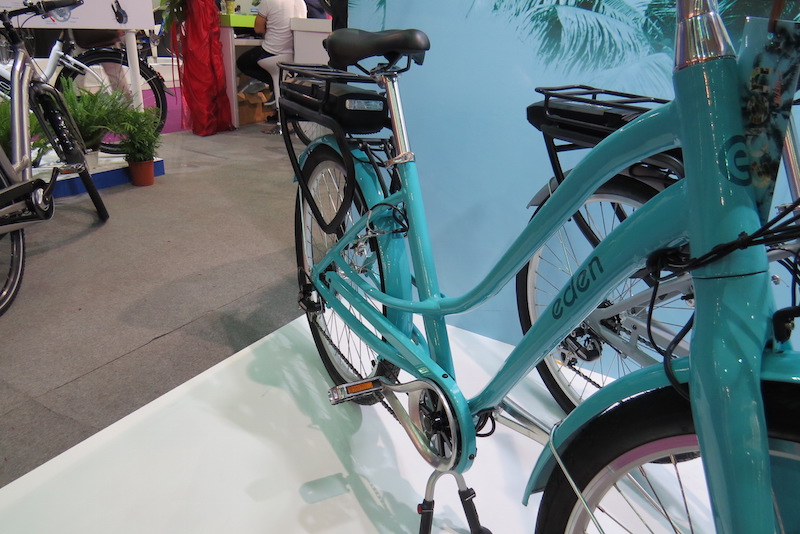 A closer look at the curvy frame tubes on the Eden e-bike.

Make sure you checkout part 1 and part 2 and part 4 of the Taipei Cycle Show highlights.