The Equal Bike – Light and Affordable 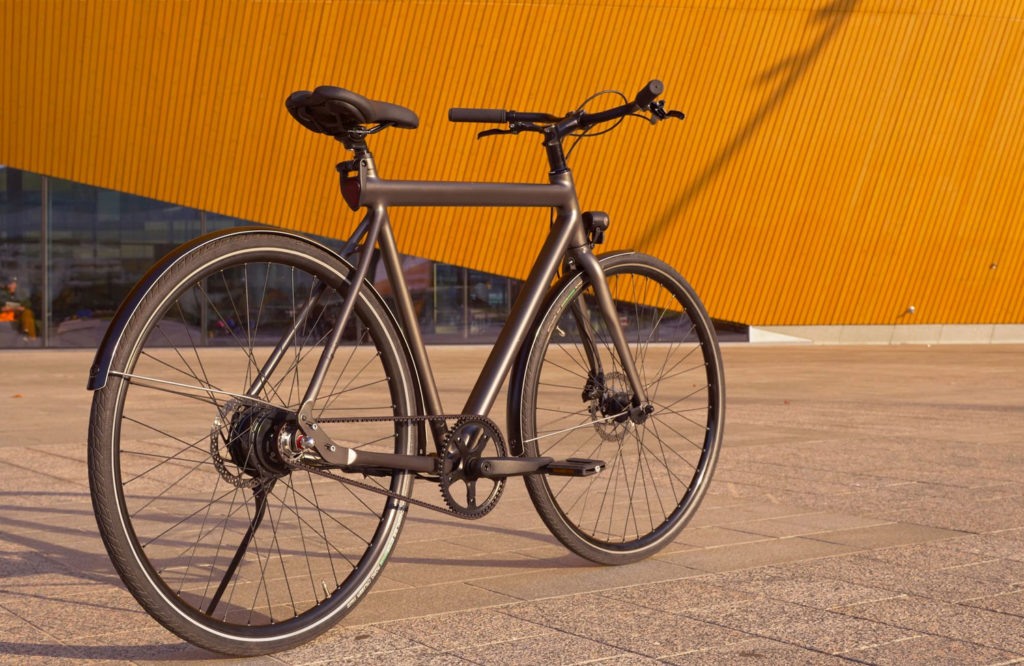 ‘With a starting price of €1,490, we want people to stop comparing the cost of a decent e-bike to a used car, ”says Andriy Sytnyk, Co-Founder and CEO.

The single-speed bike itself is very much in the line of slick city bike offerings from Van Moof, Ampler and COBOC though the price certainly undercuts them all.  It features a rear hub motor with frame integrated lights and battery (225Wh) plus hydraulic disc brakes and fenders. Inevitably there is an app but it isn’t vital to use of the bike. The basic version gets a chain drive with belt drive an optional extra. Rack and kickstand are due in 2021.

The removable battery looks a nice piece of design too: BH’s Core Carbon has sleek lines and weighs a claimed 12.9kg but has a huge max battery capacity of 720Wh

Spanish manufacturer BH recently announced its Core Carbon e-road bike – most notable as it features the option for a 720Wh battery which BH say gives a 220km / 137 mile range. The larger battery option is achieved by adding an extra 180Wh ‘bottle battery’ to the 540 Wh in frame battery. There is also a Core GravelX variant and prices range from €5,499 to €8,999 depending on model and spec. REI Co-op, based in Kent WA is, as the name suggests, a co-op and has been selling outdoor equipment of all kinds since 1938. They sell their own brand Co-op bikes as well as other brands. Describing their bike services they say:

‘A full-service bike retailer and dealer, REI is staffed with some of the best-trained professionals in the industry, including REI Master Technicians who are Barnett Bicycle Institute certified. In addition to regular tune-ups and maintenance, REI also provides full services for e-bikes, including diagnostic services for most major e-bike brands including all e-bikes the co-op carries. For more information and detail on local services, please visit REI’s bike shop services page.’

REI Co-op recently announced announced the launch of two ‘town-to-trail’ e-bikes as their first venture into the e-bike world. The co-op also announced additional bicycle shop e-bike service capabilities, as well as virtual expertise for customers looking to do more riding this season. A modified e-cargo bike is now in use as an ambulance on the streets of the French capital. This Design Boom article reports that Wunderman Thompson Paris has collaborated with French e-bike retail brand eEcox to produce ‘Emergency Bike’ — an ambulance on two wheels.

It can carry 150 litres of medical supplies in an insulated box and features 1000Wh worth of battery capacity.

It is estimated that every minute lost in traffic means a 10% less chance of survival for patients undergoing a medical emergency so clearly any time the e-bike might save could prove vital. The UK’s BBC reports gives the background to this inspirational story:

‘Bruce Tate, 39, was in a bad place after the first lockdown. His business in Newcastle, called Need Music, which handled live bookings for pubs and weddings, was forced to close, and he wasn’t entitled to financial support from the government because he drew his income as company dividends.

But while contemplating his future, sitting at a picnic table outside his office, he had a “light bulb” moment. A cyclist whizzed past. This was normal. The office garden overlooks Route 72, also known as Hadrian’s Cycle Way, one of the UK’s most popular cycle routes. He suddenly thought: what if he turned this area, which his business was renting anyway, into a cafe, capitalising on the passing trade on wheels?

The open air cyclists cafe was born and has since contended with a national lockdown and tier 3 restrictions, the most restrictive level.

“I will come out of this pandemic stronger than I went in,” he says. “Hopefully I will have two successful businesses, instead of one.”

eBike Racing Planned for Oregon in 2021

Bike Portland reveal that in a recent statement Oregon Bicycle Racing Association announced that the 2021 season will cover events that include a category for “Class 1” electric bikes.

Oregon Bicycle Racing Association Executive Director Chuck Kenlan said e-bikes would only be allowed to race on courses where e-bikes are allowed by land managers. He expects gran fondos and gravel events to see the most interest initially according to the Bike Portland article. The article adds ‘So far there are no e-bike events on the OBRA calendar, but that’s likely to change in the coming months.’

Initial tests of the solar road in Peachtree Corners, Georgia have expanded

All forms of electric transport from e-bikes to e-cars want to to boast their green credentials, but in truth they are only as green as the electricity that supplies them.

The city of Peachtree Corners in the Atlanta metropolitan area looks to be leading the way in this regard; ‘ …the city’s new solar roadway system … produces energy for a solar-powered EV charging station located at city hall. The installation also marked the first road surface-powered solar panels to be activated in a United States city’, according to this PRNewswire report.

‘From the world’s first fleet of teleoperated e-scooters deployed, a fully autonomous shuttle utilized by actual residents, a solar roadway to the largest electric vehicle charging hub in the region, Peachtree Corners is where the most future-forward Internet of Things (IoT) and sustainable technologies come to life for the benefit of its people, and the world.’ It’s key points are a super hefty 19kg weight, stated 40km range, aluminum construction and an estimated lifespan in public use of  5 years.

According to the Tech Crunch article it also features ‘built-in sensors to detect accidents and unsafe riding’ adding ‘On the integrated dashboard, you can receive alerts telling you that you’re riding in a pedestrian area, or in a low-speed area. You can also see if you’re allowed to park in this area. Bolt plans to turn on front light blinking when you enter a pedestrian or low-speed area.’

Over in the UK ebiketips tells us that ‘E-scooter operator Voi is to triple its fleet of e-scooters in the UK cities where trials are currently underway. Birmingham, Liverpool, Bristol, Bath, Northampton and Cambridge will all see more scooters added during December in response to strong demand from the public.’

Europe’s Cycling Boom & eBike Sales Predicted to Grow from 3.7 Million to 17 million by 2030

Bike Europe just released this compendium of market reports for Europe and Turkey looking back at 2019 with growing e-bikes sales across the board, including the following figures:

Looking to the future, this Bikebiz article predicts some simply staggering predictions, stating:

‘E-bikes are predicted to grow from 3.7 million bikes sold in 2019 to 17 million in 2030. 2020 numbers suggest that the e-bike market will already end up 23% larger despite several months of bike shop closures in many countries and pressure on supply chains. Because of the current demand and the support already committed by Governments in terms of new infrastructure and purchase premiums for e-bikes, the associations believe that the ten million per year sales mark could be achieved as soon as 2024.’

LEVA-EU (the European Light Electric Vehicle Association) reports on the growth of speed pedelecs (e-bikes with electric assist up to 28mph) in the Netherlands, saying ‘ On 1 July 2020, a total fleet of 21,100 vehicles are on the Dutch roads. Compared to 1 July 2019, this is a growth of around 23% (17,200) – and the number has doubled compared to three years ago on 1 July 2017. A total of 3,300 pieces have been purchased (new and second hand) In the first 6 months of 2020, a total of both new and second-hand speed pedelecs were purchased. According to CBS, COVID-19 has had no impact on the sales.’

Micromobilitybiz details how Scottish e-bike innovator FreeFlow Technologies (FFT) has secured £1.85 million in a funding round:

‘The investment will support a move to a new headquarters and R&D facility in East Kilbride and further strengthen the team with senior technical positions and assembly engineers recruited.’

FFT claims a ‘novel’ patented e-bike transmission system that is more lightweight, compact and provides a higher power density than other products.

Calamus Coming to the UK Calamus moves from India to Birmingham, UK thanks to a business accelerator scheme

Bikebiz has this news high-tech e-bike designer Calamus; ‘India-based e-bike startup Calamus is making its way into the UK market thanks to a place on the Birmingham Enterprise Community (BEC) Forward accelerator scheme. Calamus is now in line to receive full support and backing to help establish a base in Birmingham, operating its UK HQ from the city. It is the first business to be welcomed onto the third cohort of the innovative Forward programme, which was launched back in 2019.’ Bafang is making a serious statement of intent to move into the mid-drive market with the continuation of this sponsorship deal. Pictured is an American Eagle model with M500 mid-drive.

Bafang has confirmed its continued sponsorship arrangement with the CST PostNL Bafang Mountainbike Racing Team, supporting the team into the 2021 Olympic year and beyond. The partnership will see ongoing close collaboration between Bafang, American Eagle MTB and the racing team.

Here’s an interesting opinion piece in LEVA-EU (the European Light Electric Vehicle Association) arguing that a small number of European e-bike makers are stifling competition. Although a fairly complex argument, in its simplest form it contends that, in a world where most e-bike parts are made in the far east and assembled in Europe, older companies that have gained some tariff exemptions are able to effectively exert a stranglehold on the market, making it hard for tariff-burdened start-ups to compete and effectively stifling innovation.