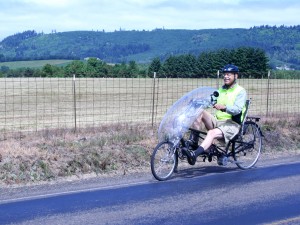 One of the things that makes electric assist biking so much fun is the varied reasons why people get into it, so this week we begin a new feature called “E-bike Stories”, an opportunity for you to share your story and presumably your passion.

Professor John Luna recently retired from Oregon State University in Corvallis, where he taught agricultural ecology and sustainable farming, concentrating on vegetable growing.  Luna lives about ten miles outside of Corvallis, which he says was about a forty-five to fifty minute bike ride from his home.  He gave lots of thought to speeding the trip,  “I thought that with an electric motor I could get their faster, but even more important, I could have more fun.”

Luna opted to buy one of the fastest recumbent bikes on the planet, the long wheelbase Easy Racer Goldrush.  But when it came to the motor, Luna admits that he didn’t do a great deal of research before deciding on the EcoSpeed.  Even though he also looked at a BionX hub mounted system, he says that after seeing an article about his Goldrush married to an EcoSpeed chain drive, he was pretty much sold.  Several conversations with folks at Portland based EcoSpeed and he made his move. Now the trip into town has been cut down by more than half, to an average of twenty minutes.  He says he cruises along at about twenty-seven miles an hour, noting that people on the road are always surprised at how fast he’s able to move.  And he feels much safer being able to accelerate rapidly through intersections, to get away from turning traffic. 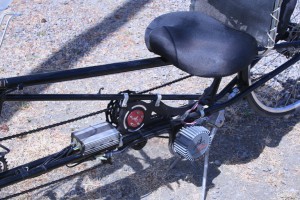 Before he got his Easy Racer with the EcoSpeed motor, he was riding an old Schwinn road bike, “it was hurting my hands, hurting my neck, and hurting my back.”  Now, he says he’s a lot more comfortable.  He enjoys sitting upright and being able to see all around him, and, just like he figured he is having more fun.  Professor Luna says the only downside is that with the frequent Oregon precipitation, “you get rain in your face faster.”

Luna is taking his passion for electric biking to the next level, actually developing a carbon fiber shell to completely enclose his Easy Racer.  He says one of the biggest challenges was to develop a canopy that would let him see, but a chance meeting with an engineer from a plastics company has helped him overcome that obstacle.  Asked if he’s willing to provide a picture of the new design, Luna declined, leaving one with the impression that this is something he feels has commercial potential.

He says that he’d like to do more touring with his bike,  but he’s concerned about how he’d charge the EcoSpeed battery on a long trip.  He also feels that a long trip with his wife isn’t practical until she too is motorized.

As to his overall electric biking experience, Luna put it this way, “It has made a big difference in the quality of my life.  Even though I’m no longer commuting to work, I still have a sense of excitement every time I get on that bicycle.  I didn’t say that before I got this bike.”

Do you have a story about what you do with your electric bike that you didn’t do before?  Drop a note to [email protected], and let us tell your story to the rest of the Electric Bike Report community.