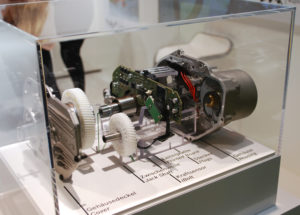 Having been to the trade and press day of the UK’s Birmingham Cycle Show for the past three years it was interesting to see an explosion in the number of electric bikes present.

There were more European firms especially keen to get in on the action of an apparently burgeoning e-bike scene.

Taking centre stage were the e-bike motor manufacturers, namely Bosch and Shimano, each with their own stand, making it clear the resources they were putting into a nascent UK market. 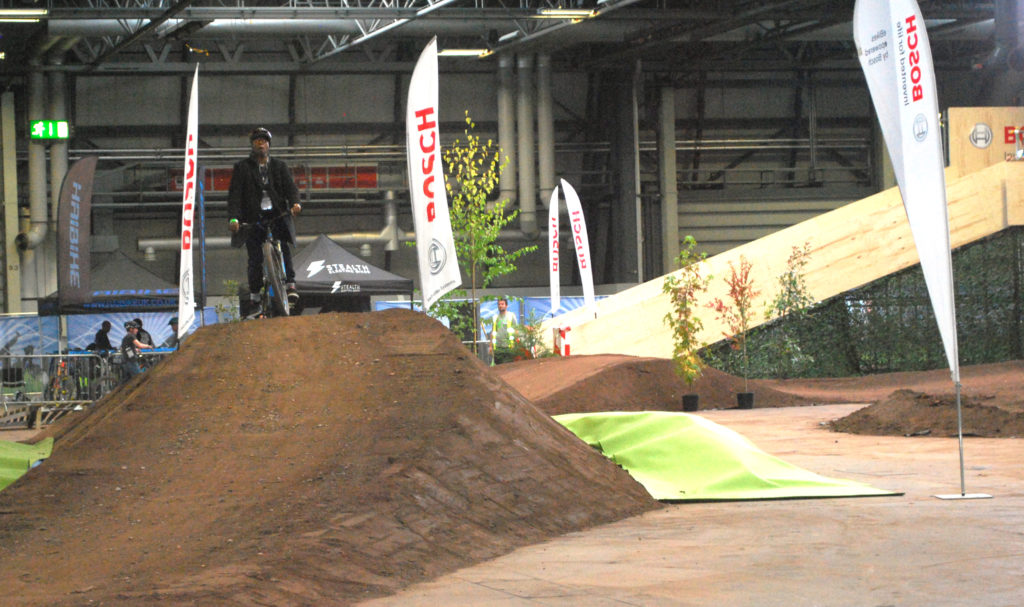 I could imagine it being extremely popular with families on the forthcoming consumer days. 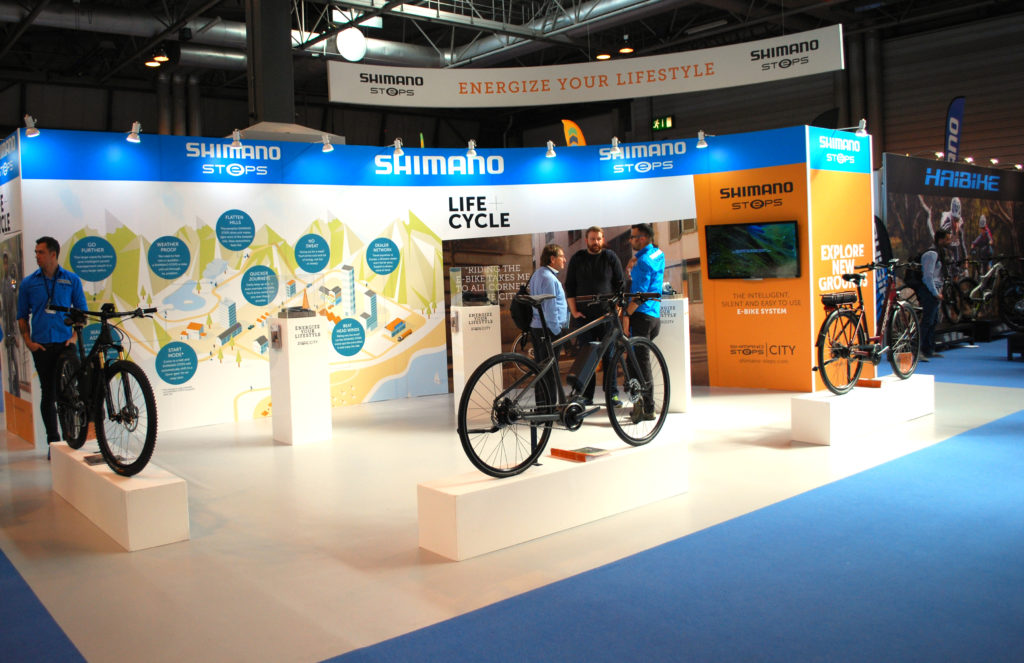 Meanwhile over at the other end of exhibition hall Shimano had sponsored a rather more sedate e-bike test track.

But what about the bikes? Not surprisingly given the size of e-MTB track there were plenty of e-MTBs, several from brands I not been aware who appeared to be coming to the UK for the first time. 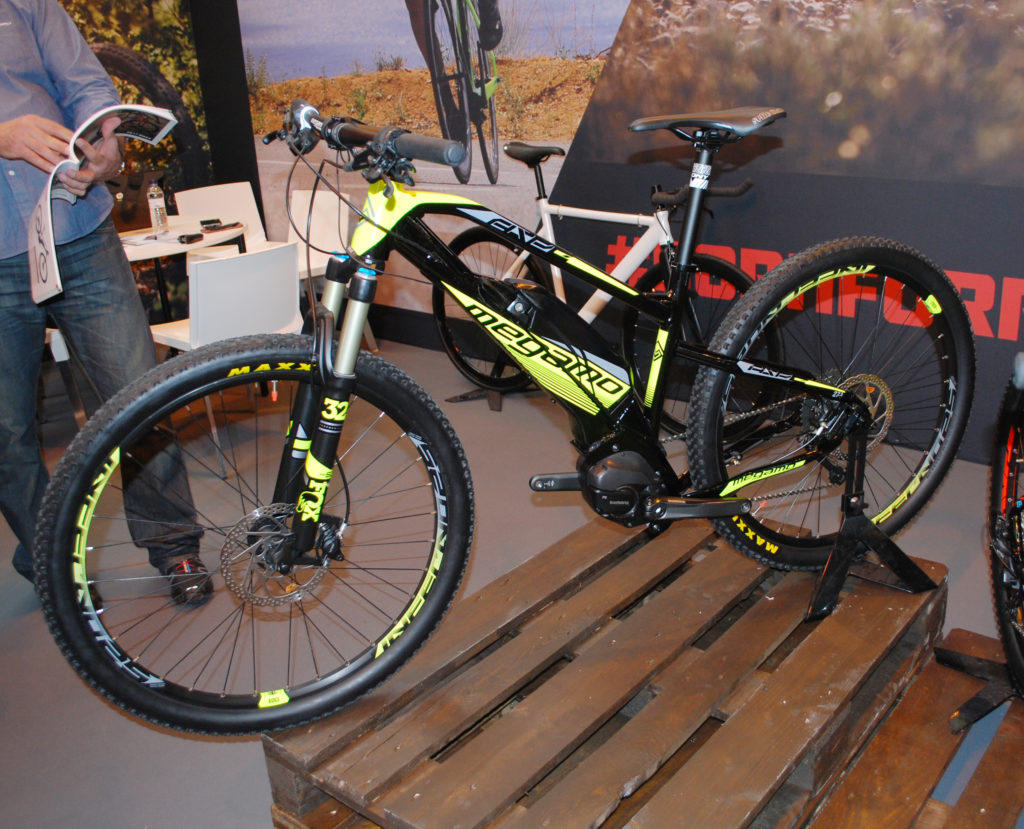 Megamo are a Spanish firm with a factory in Girona in north Spain and their two Shimano and Bosch designs bike showed how much sleeker e-MTB designs are getting compared to the first e-MTBs of only a couple of years ago. 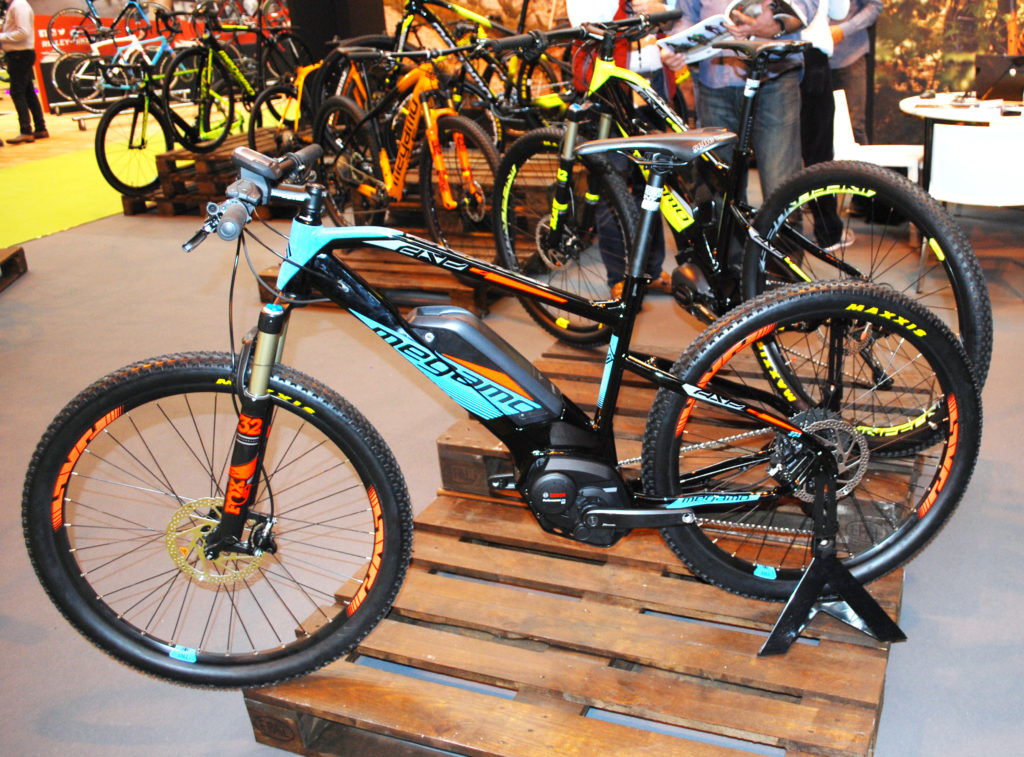 German MTB specialists Mondraker were also there in force with several e-MTBs such as this e-Crafty with distinctive trail geometry and Bosch power. 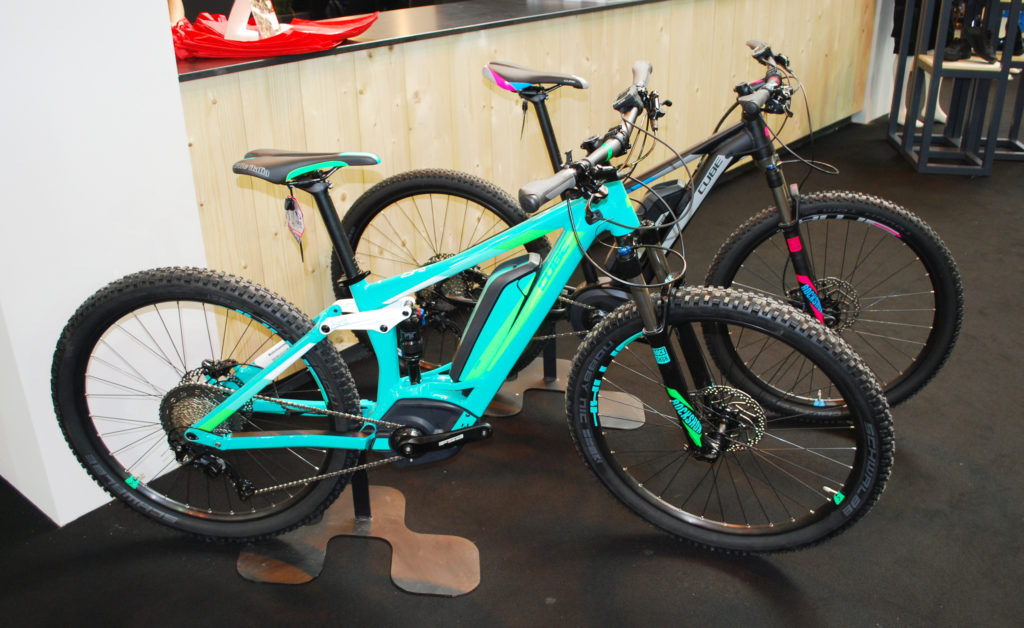 Cube made a particular impression with the size and range of their Bosch-powered e-MTBs. I noticed these couple of female-specific e-MTBs taking pride of place by the Cube coffee bar. 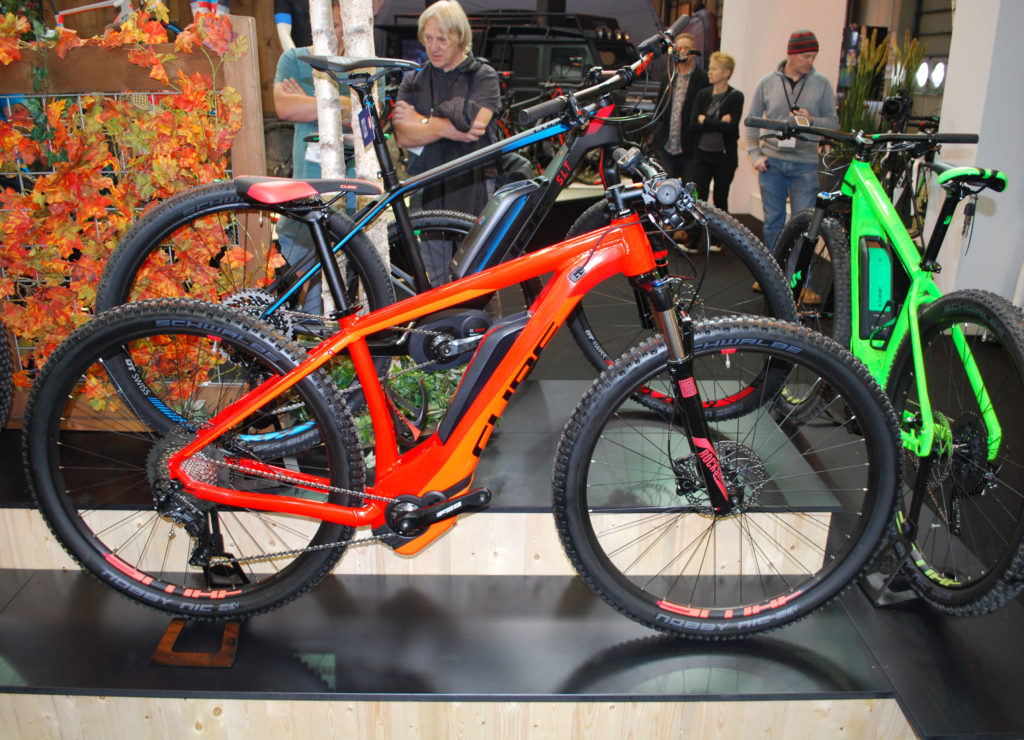 And this model with drop casting frame to house the battery. 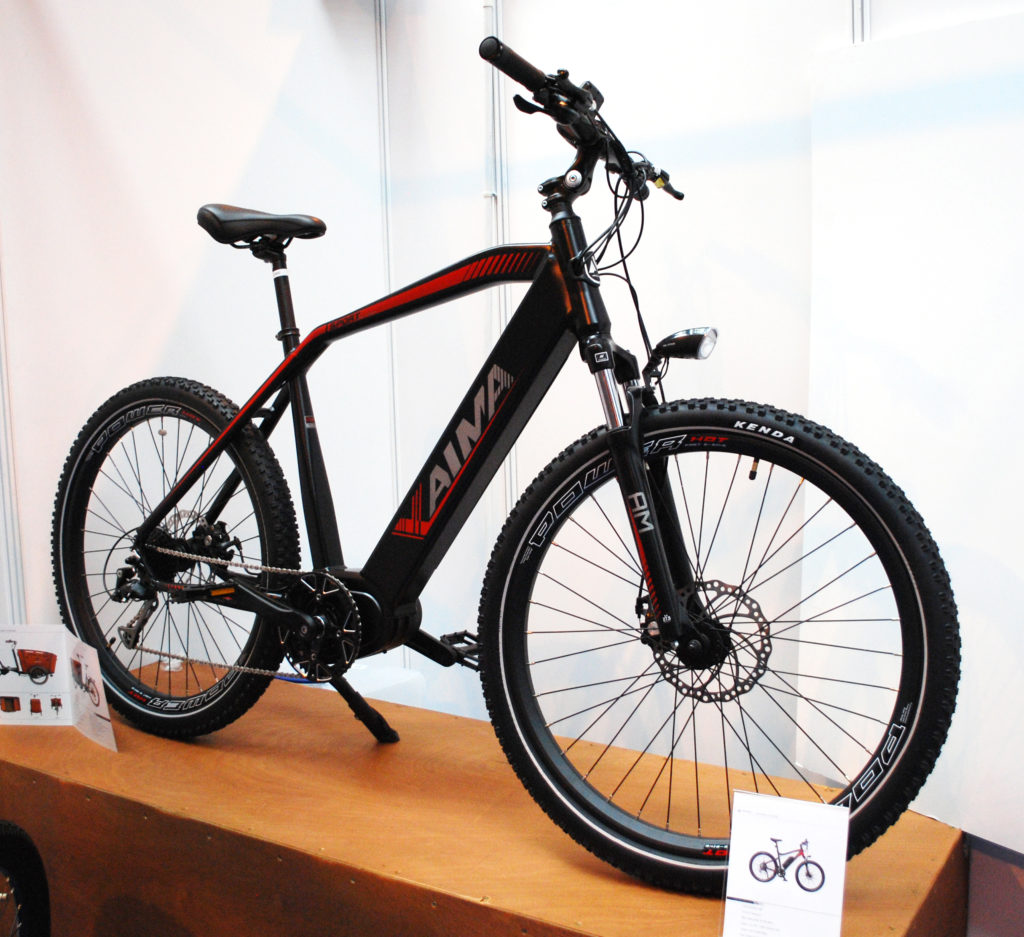 A brand new to the UK Chinese brand was Aima, but EBR had actually done a factory tour of them. From a quick inspection I was impressed with the quality and the UK prices were intended to undercut current Bosch and Shimano type prices whilst maintaining some of the same design characteristics such as powerful mid-motors (from Bafang), frame integrated battery and frame routed cables. 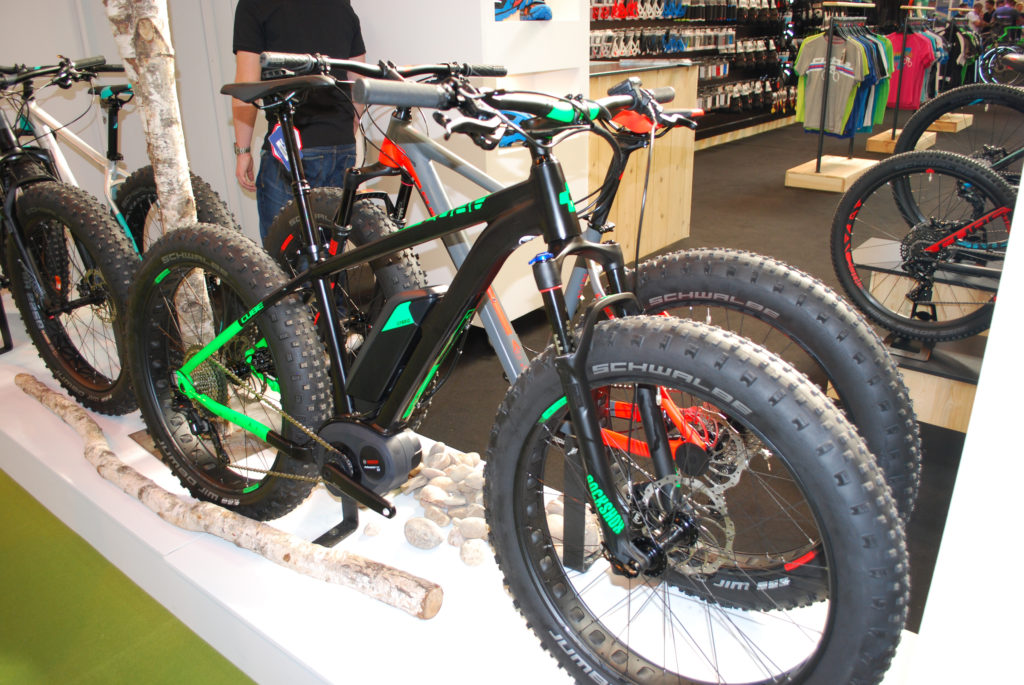 I got the impression there were fewer fat bikes around than last year though this electric example, again from Cube, also caught my eye. 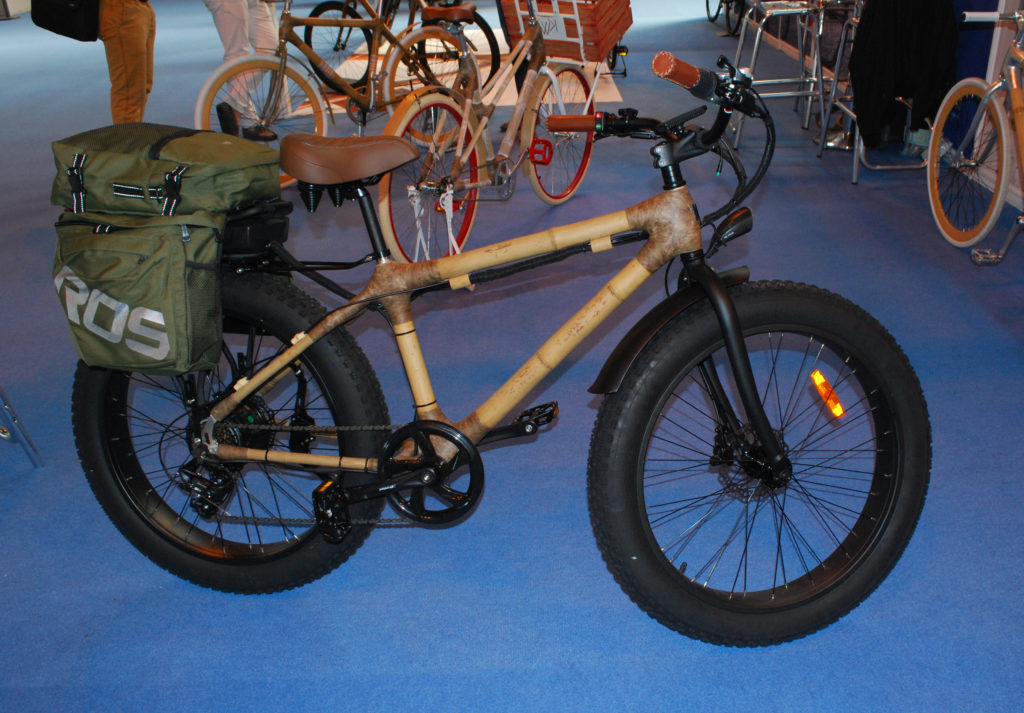 And for fans of the really wayout how about a bamboo-framed e-fat bike? 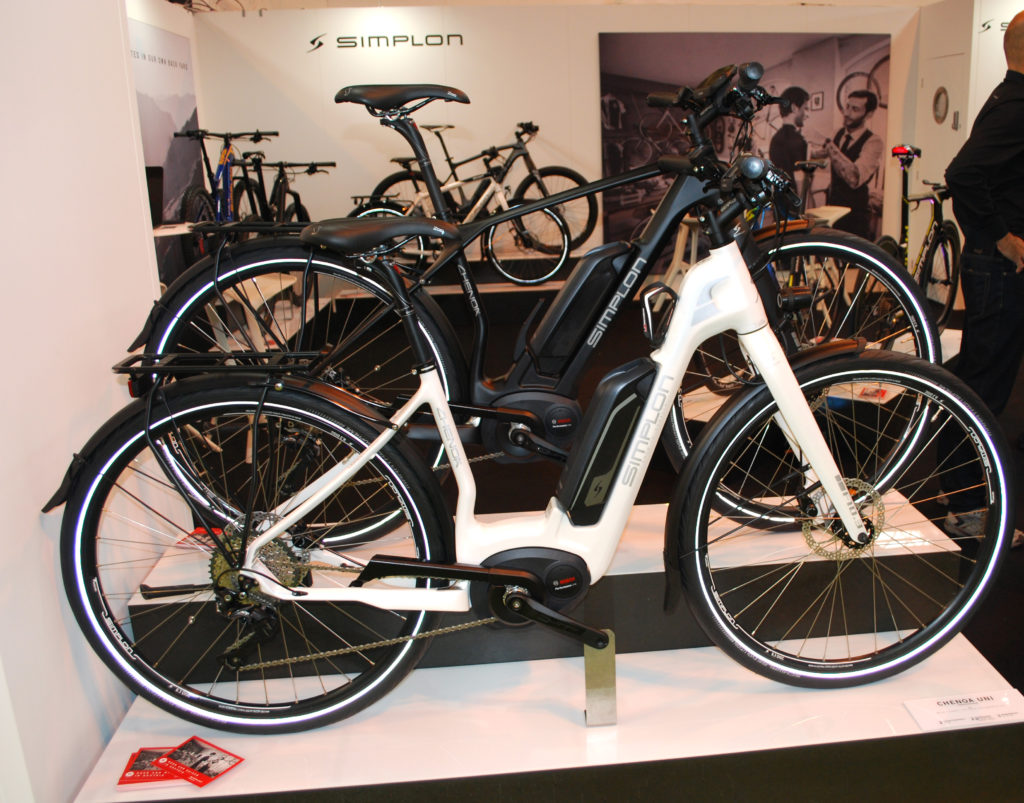 That’s not say that there weren’t some impressive city bikes too. I was particularly struck with Austrian firm Simplon’s very lightweight carbon fibre city models. Pride of place went to the Chenoa, a sub-20kg city bike (and yes that includes the lights, rack and muguard).

Also at the show were the UK’s own Momentum Electric who make supremely practical city bikes I have always rated highly in tests. They were there with their new VIT-S as mentioned in a recent EBR news post. We are hoping to have more on the VIT-S and the new crank drive motor behind it shortly. 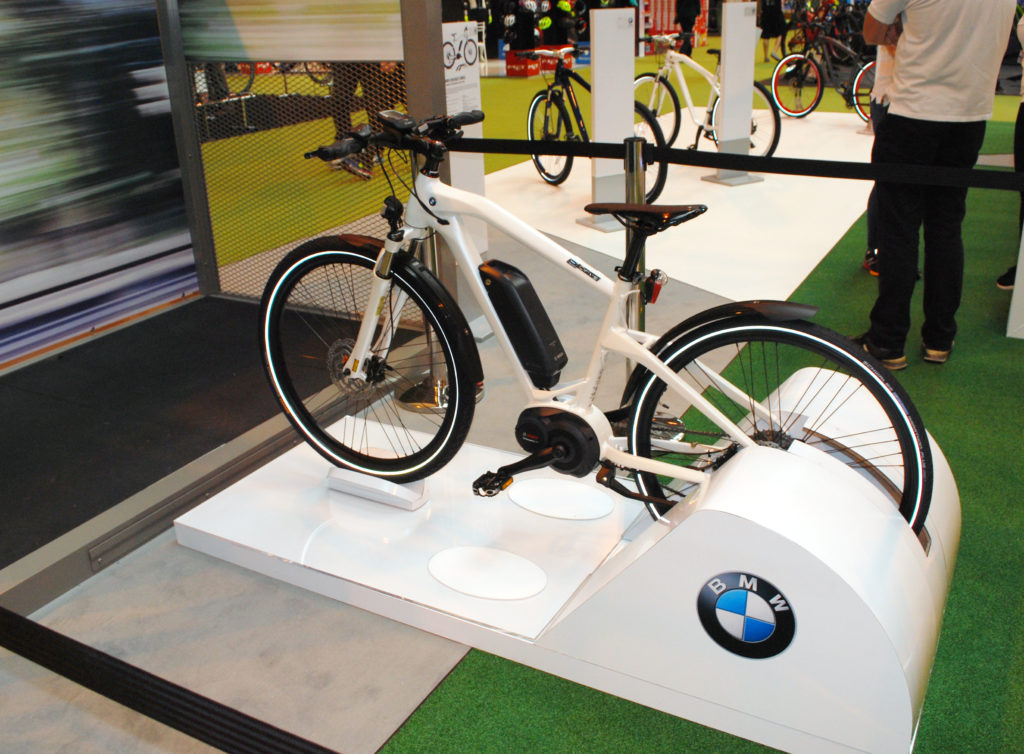 I never knew BMW were actually a bike manufacturer as well as a car maker; apparently so and they had a Bosch-powered machine that is apparently their best seller in Germany and is now available in the UK via BMW dealers. 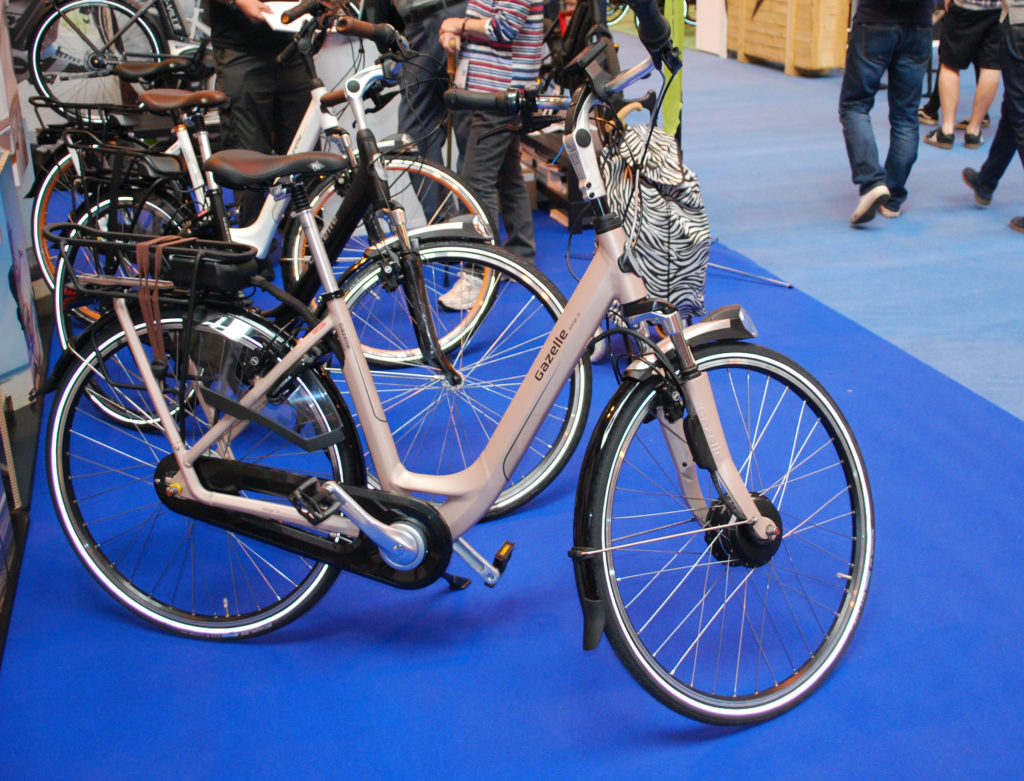 Nor were traditional Dutch designs overlooked as this fine example from Royal Dutch Gazelle demonstrates.

The UK seems to be a particular haven for some very neat lightweight retrofittable kits. 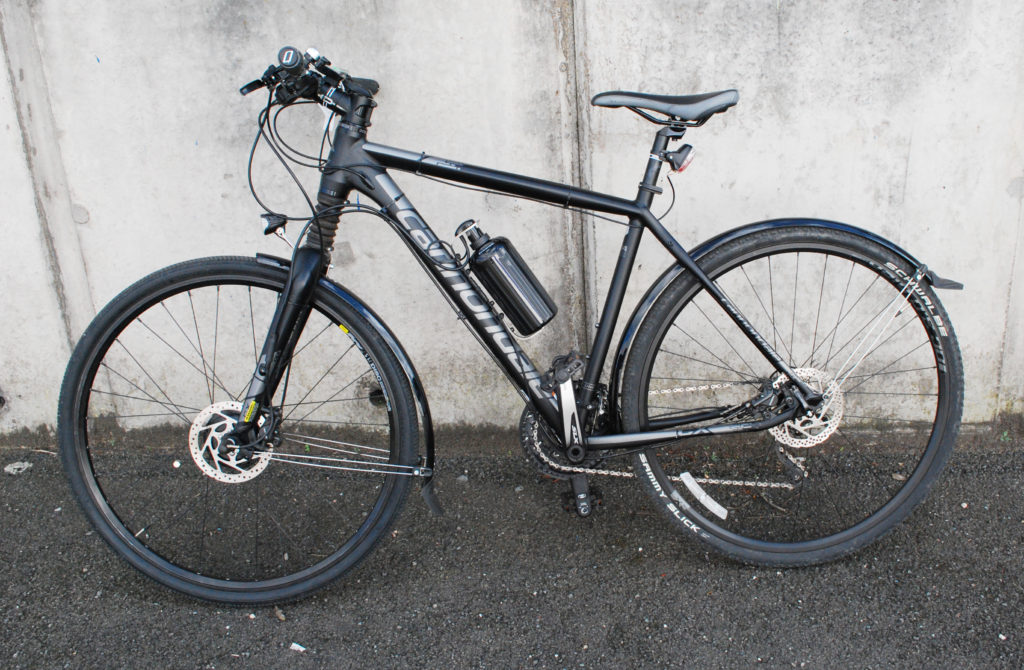 Newly launched at the show was the sleek looking Cytronex, designed and manufactured in the UK with a unique bottle battery and rear-wheel sensor that made for a smooth and powerful, though brief ride on the test track. 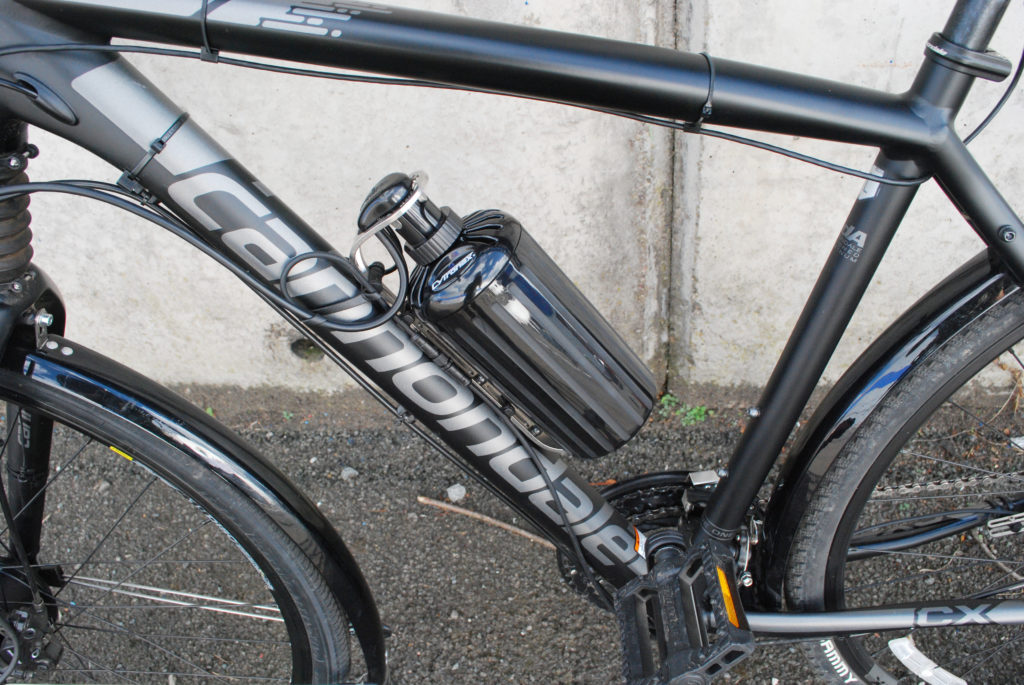 Cytronex say it adds only 3.6 kg to the weight of the converted bike and the front hub motor comes ready spoked into your front wheel, with Cytronex offering the commonest rim sizes. They are taking orders now for delivery of bikes in 2017. PICS 15-17

I also spoke to two companies specialising in conversions of classic English bike designs, Brompton and Moulton – ARCC and Nano Electric Bikes. EBR actually has a full report on the ARCC Moulton here but they are also now offering Brompton conversions with their Bosch battery powered kit. 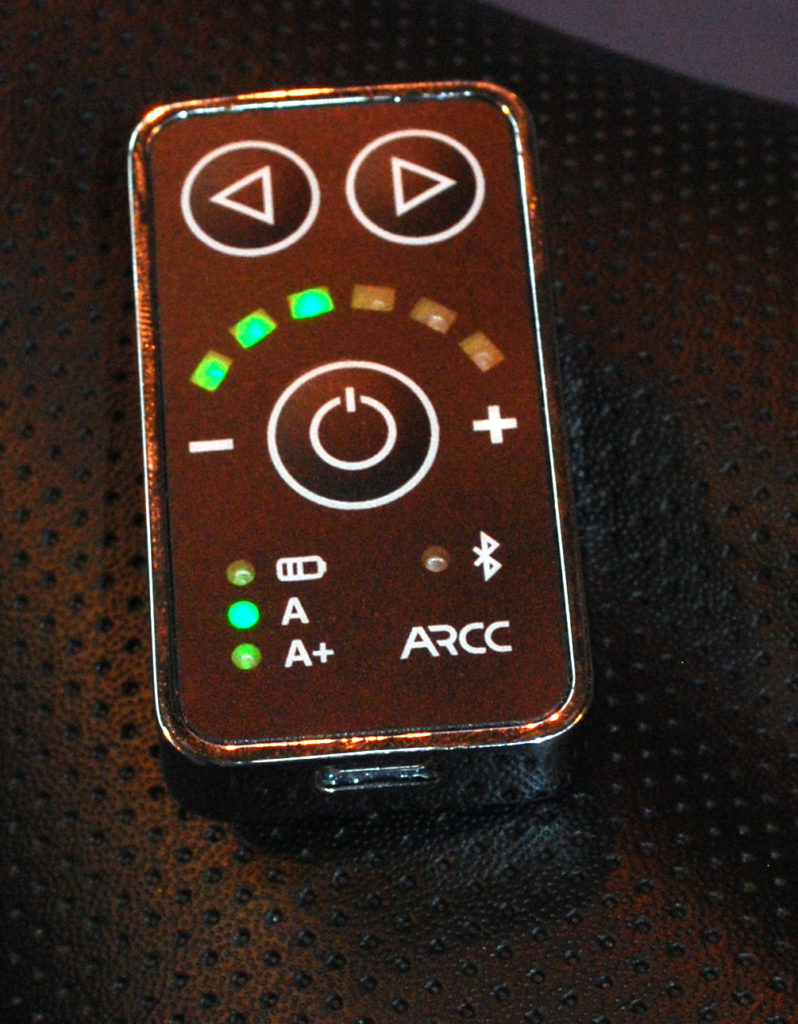 The battery has increased in size to 216Wh and they also showed me their very handy and beautifully-produced bluetooth removalbe handlebar control. There is also a luggage conversion system available meaning the bespoke Brompton front luggage options are available with the battery housed inside the luggage. 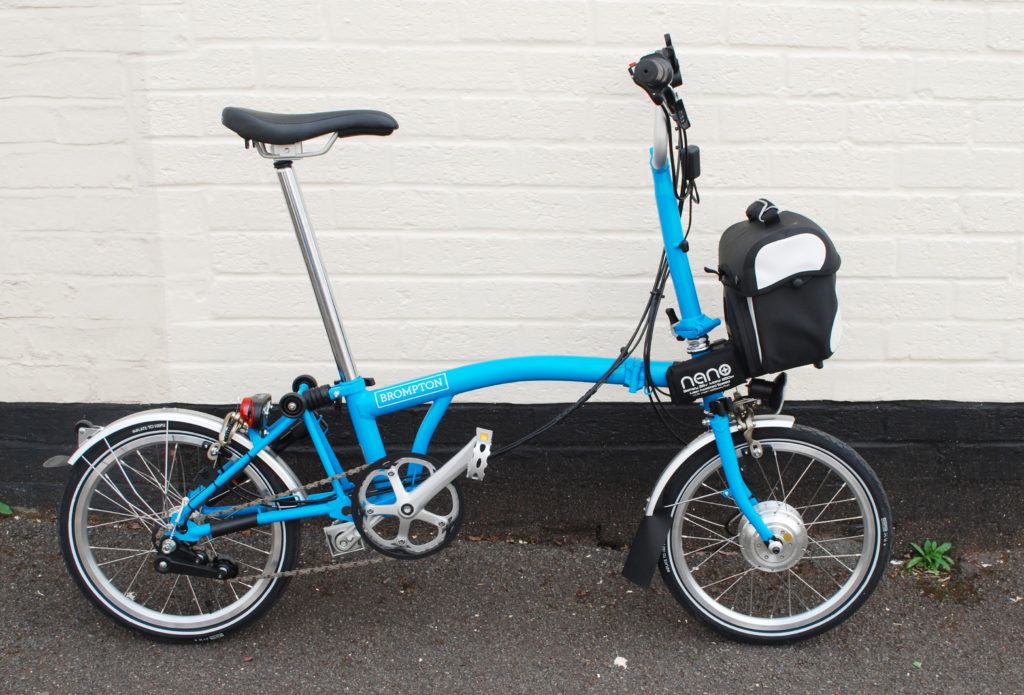 Whilst not at the show I also paid a visit to the production facility for nearby Nano. Nano use a remarkably narrow and light friction drive motor, specialising in either supplying kits or workshop fitting of their Nano 2.0 to the world-famous (and also designed and made in the UK) Brompton folding bikes. Nano says they have also just established a production line for that other iconic British design the Moulton. One recent development is the standardising of their manufacture and design around a Bosch power tool battery (as also used by ARCC) that fits into a range of Brompton luggage and so is quickly removable, meaning the motor and controller add a little over 2kg to the folded bike.

There are twist grip, thumb throttle and pure pedelec options available, with assistance up to 15mph (Nano have added a motion pedal sensor to all three versions for UK customers to keep the bikes legally compliant). Whilst Nano realise the US has a higher legal e-bike speed limit, they say the bike motors are geared for hill climbing and so top speed is not a major concern for many of their buyers.

I have trialled and owned several of the kits and found the unique technology and clever design a real boon if you want a quick folding bike with remarkable hill climbing ability. Kits start at £710 (around US$920) with new Nano Bromptons from around £1900 (US$2455) plus delivery. Nano have demo models and fitting facilities available at several UK locations including London, Manchester and Leamington Spa. 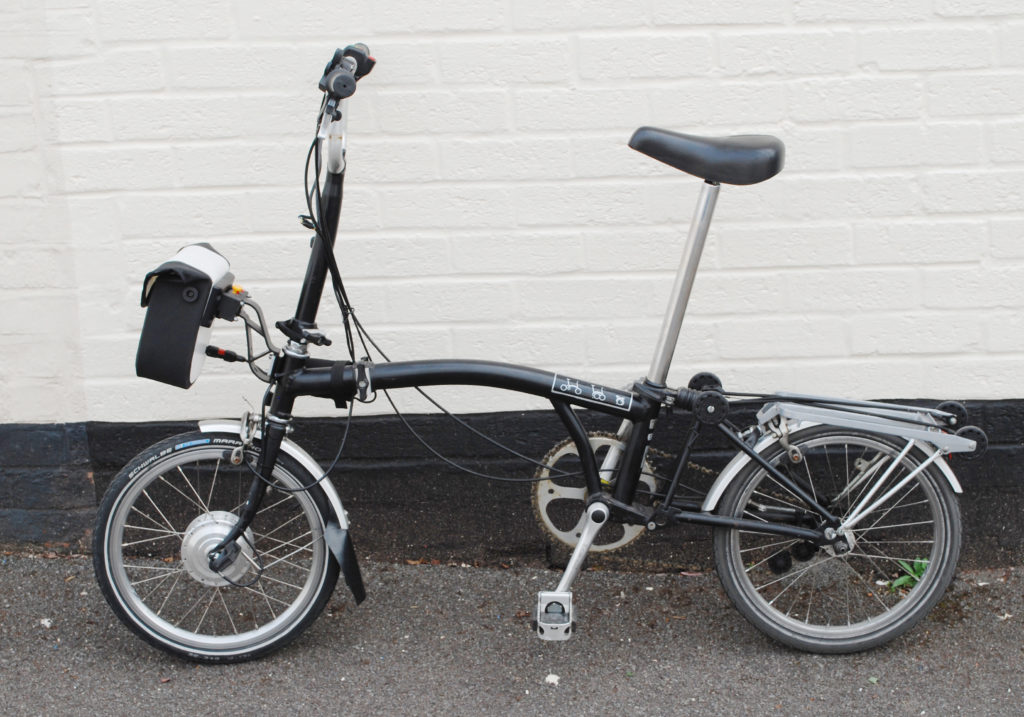 Note that the kits require Brompton front forks to be spread slightly and so will not work with titanium fork models, but you don’t want to widen the forks yourself Nano can provide them ready prepared in all the Brompton colours.

Thanks to Richard Peace for this eBike report!