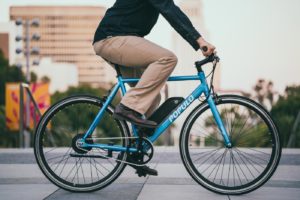 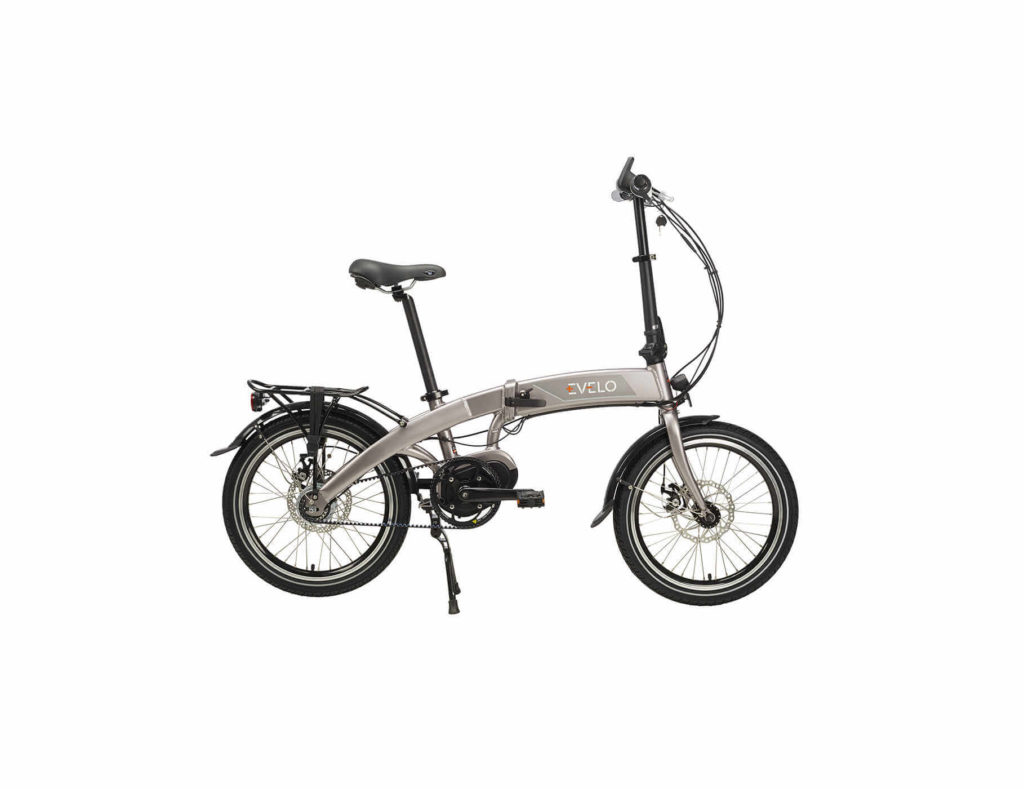 EVELO has been rolling out a new line up of eBikes and the Quest Max folding eBike is their latest addition to the growing line. It is similar to their Quest One (currently in for testing & review) and it has an impressive drivetrain that includes the new Bafang Max 350W mid-drive motor, NuVinci CVT transmission, and a Gates Carbon Drive belt. 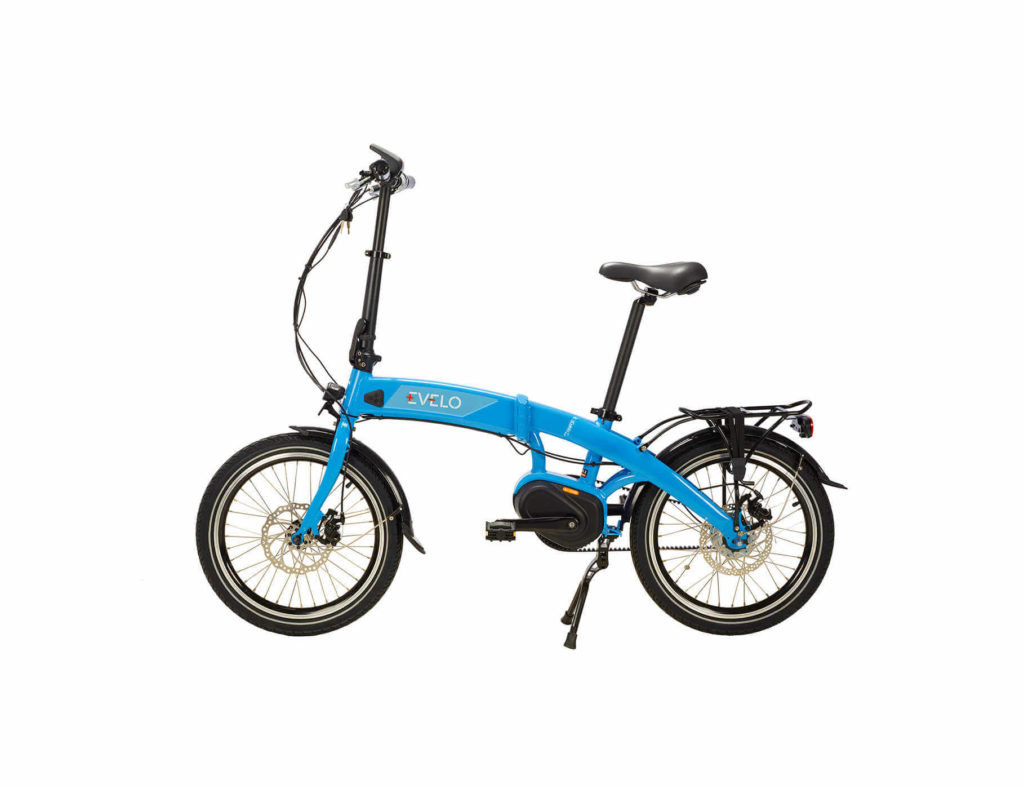 New Yamaha eBikes in the US

Yamaha will launch its “Yamaha Power Assist Bicycles” brand to the U.S. at Interbike in Las Vegas, September 20-22, 2017.

The world’s largest bike and e-bike trade show, Eurobike, has finished. It welcomed well over 40,000 trade visitors and there’s plenty to catch up on. 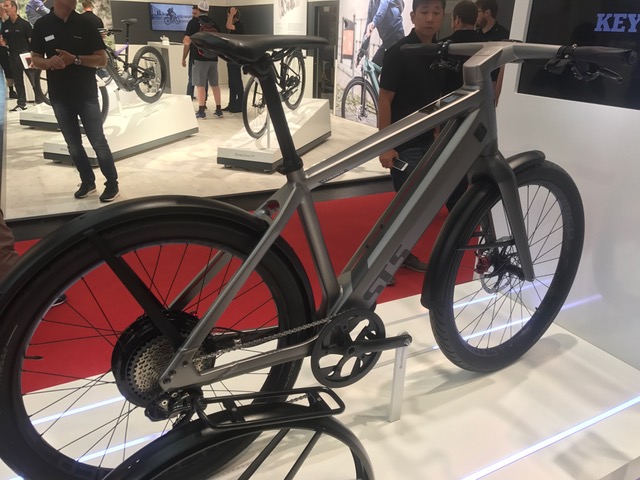 Check out our post on the bikes our correspondent cast his eye and his camera over – so many in fact we needed a Part 1 and a Part 2 to cover them all.

A Eurobike startup award goes to the Cowboy e-bike from the company of the same name. 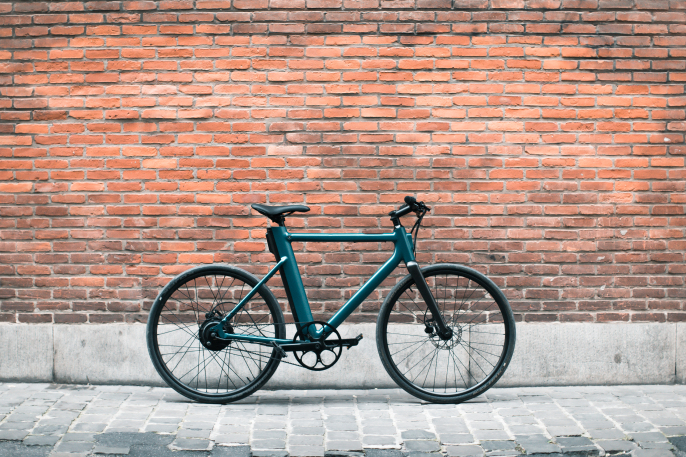 Eurobike judges summarised it as ‘an urban pedelec with a cool design simply because of the battery included in the seat stem and the nicely integrated light…..Together with the accompanying app, this attractively priced pedelec also offers anti-theft protection and GPS tracking – an impressive all-round package.”

For background info on the people behind the bike check out this Techcrunch article.

Cube have revealed their latest take on their long-running e-MTB Stereo line. 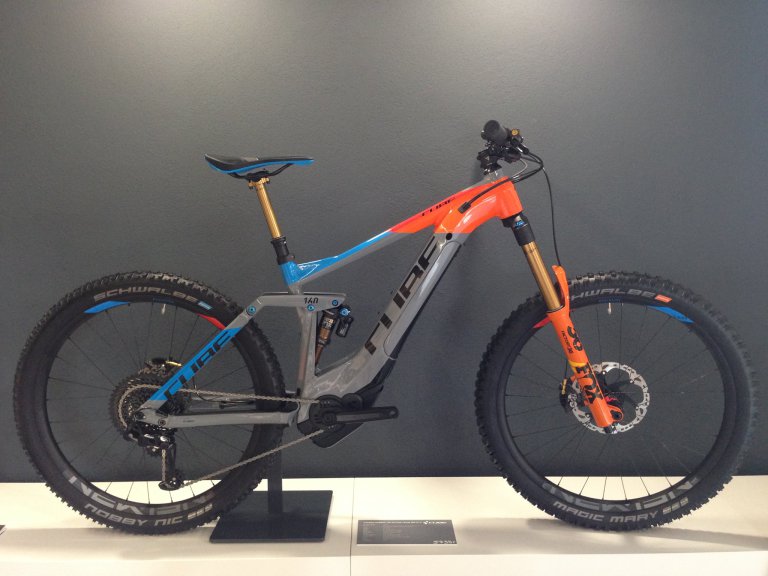 It’s no surprise 2018 bikes will have a more integrated look and fall into three different categories – 120, 140 and 160 – generally denoting the amount of front suspension travel available in each model (with the exception of the ACTION TEAM and 160 SL models which actually have 170mm of travel). 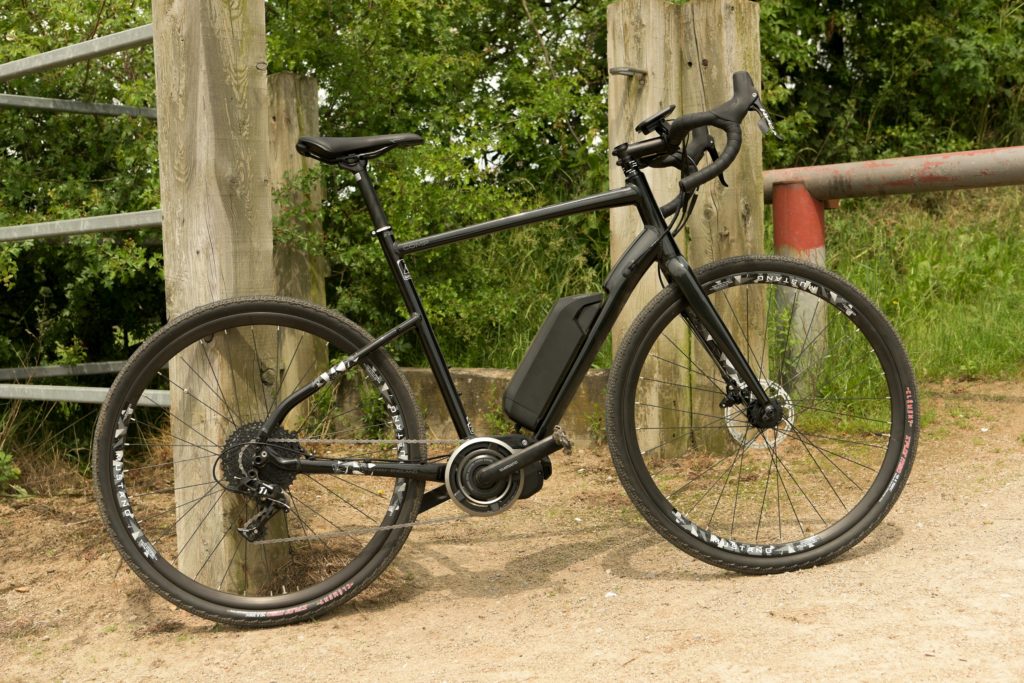 The package is completed by Sram’s Apex groupset. Following last week’s news that Willier Triestina had exhibited an e-gravel bike could this signal a move to a new category of e-bike? 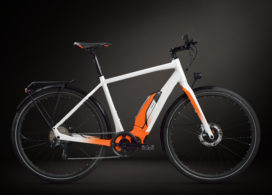 Launched at Eurobike as a ‘sneak preview’ the Pace line of bikes are MY 2018 and will use the latest Bosch and Shimano motor systems. 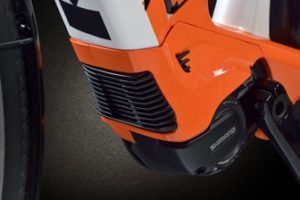 An interesting development from Koga whose forte has previously been extremely high quality but rather more conservatively styled urban and touring machines. Unfortunately that’s all the info we have on the Pace at the minute but stay tuned for details.

Gates are known for their carbon belt drives and have now acquired a Danish cargo bike, equipped with a Gates belt drive naturally, and are using it for errands around and about their HQ base of Denver. The Butchers and Bikes MK-I cargo trike is powered by a Bosch mid-drive and looks like it can handle a huge payload.

Check out the Butchers and Bikes tilting cargo e-trike – ‘built to tilt’: 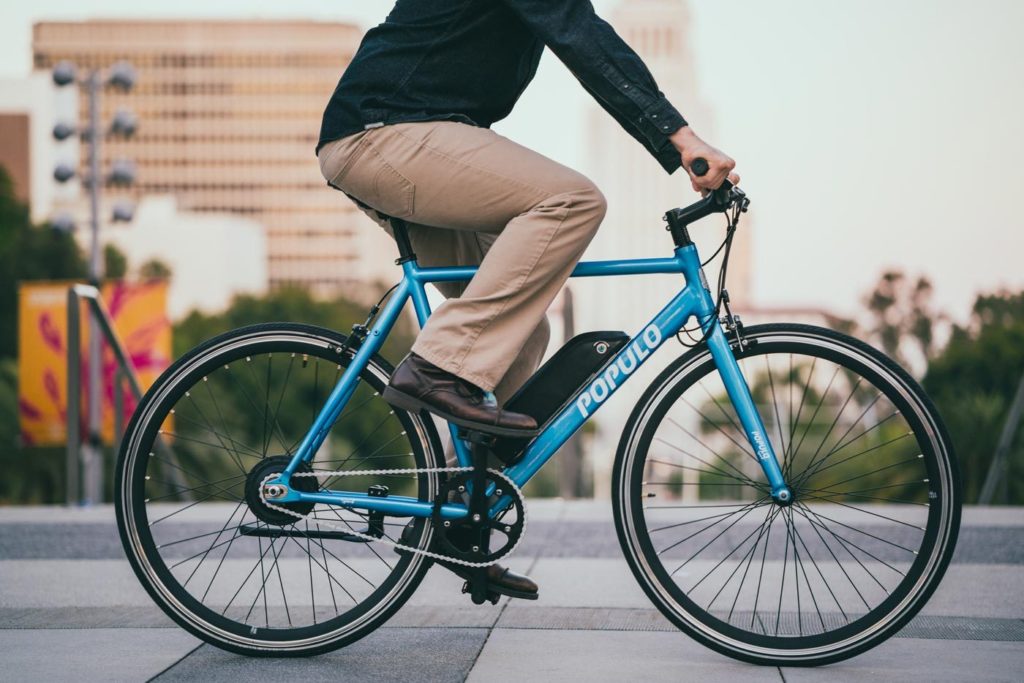 Populo Bikes is giving away a Populo Sport (MSRP $999) to one (1) lucky winner during our Ride-to-Win Giveaway. All you have to do to enter is visit a local Populo Dealer and test ride a Populo Electric Bike.  CLICK HERE to visit the official giveaway entry page.

Peter Dawe made his wealth from internet company Pipex and is now targeting the streets and greenways of Cambridge UK as the ground for a transport revolution. His Rotavelo e-trikes he believes are one of the answers the city’s – and indeed the country’s – transport woes. Dawe believes the Rotavelo would be ideal for use on the city’s forthcoming greenways.

If you want to try out the latest e-MTBs and can get to the Surrey hills this weekend of 16th and 17th September then Fully Charged’s tryout event could be for you.

The replacement event for the Portland Expo for this year will be in The Orange County Fairgrounds on December 1-3, 2017. Stay tuned for more info.

Monkey Link has launched their lights, fenders, and water bottle that have a strong magnetic attachment to the frame mount. In addition the lights are powered by the eBike battery and they are controlled via the display. 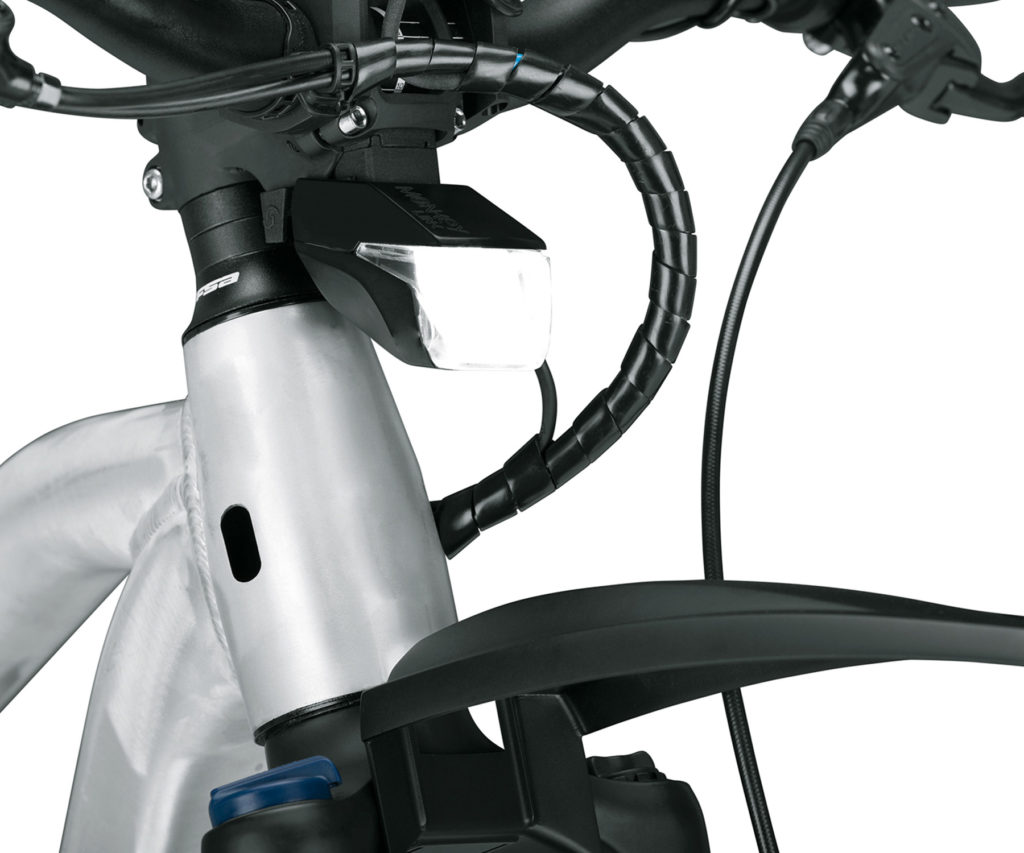 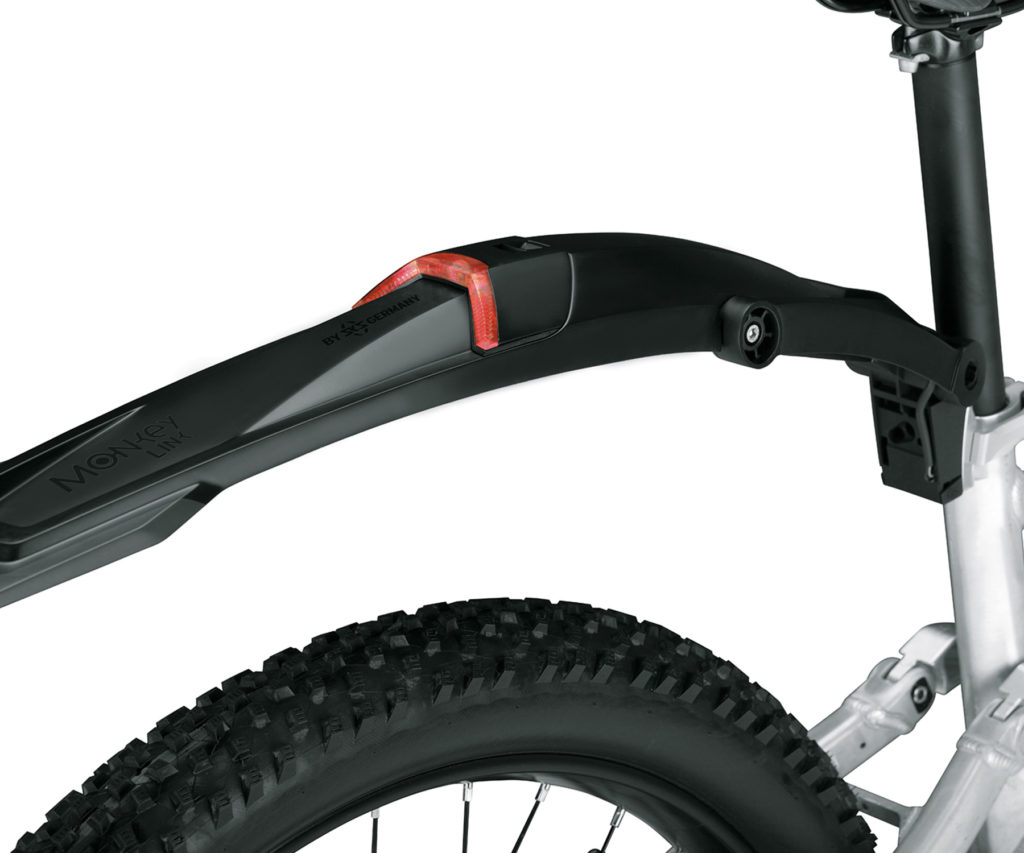 SKS is the exclusive partner for Monkey Link.

Here is a video showing the lights and water bottle cage attachment on a BULLS electric mountain bike:

The new Hiplok E-DX is a maximum-security chain noose and D lock designed specifically to be used with E-bikes and Cargo bikes. 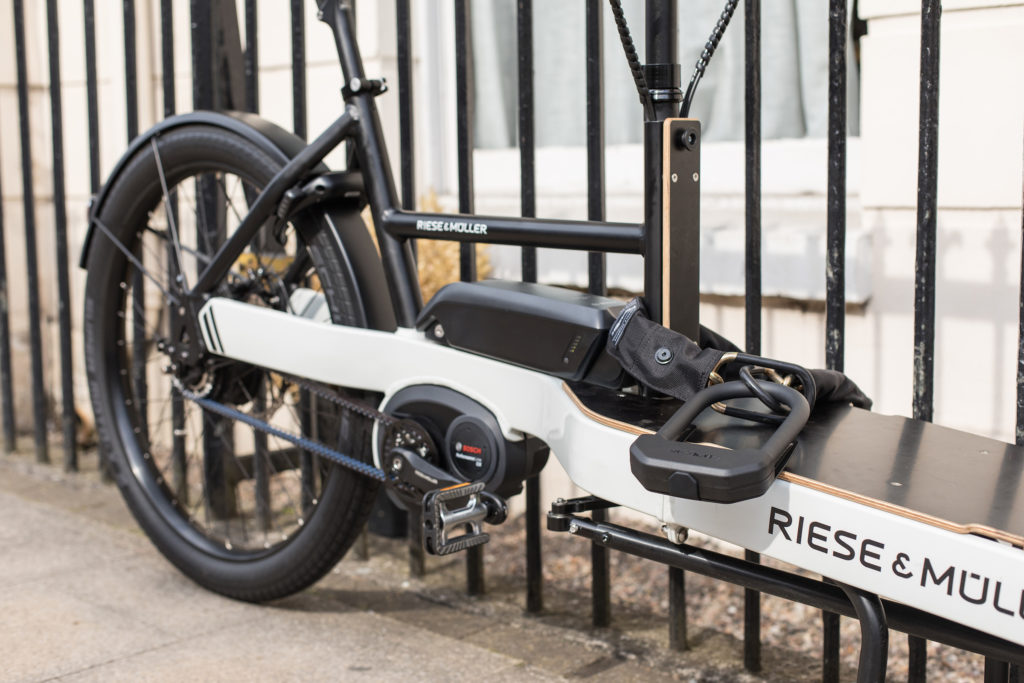 Its 10mm hardened premium steel chain has noose ends, allowing it to loop through itself, providing the bigger locking circumference required for larger and bulkier bikes. Secured with the maximum strength Hiplok DX U-lock, which features a 14mm steel shackle and anti-rotation locking tabs, the E-DX provides the strength needed for ultimate peace of mind. One Z LOK is included for securing accessories and can also be used to attach the chain to the bike frame in transit. Retail for the E-DX is $144.99.

This report from Bike Europe quotes a BPSA (Bicycle Product Suppliers Association) study to the effect that, though still relatively small compared to the main market, e-bike sales are booming, with units shipped in the first six months of 2017 nearly doubling from 8,213 to 15,930.

37 Million for E-bikes in Sweden

Cycling Industry News lets us know that this staggering amount of money has been pledged by the Swedish government in its 2018 budget bill.

The US’s International Mountain Bicycling Association (IMBA) has produced this most helpful webpage to outline both its own position of careful and respectful promotion of eMTB access to US trails, the law on different classes of e-bikes and links to useful resources.

Do the Dutch Reach and Save Lives

The UK’s pro-cycling lobby group Cycling UK is highlighting the importance of one simple step that motorists can take to save lives on the road. The so-called Dutch reach, popularised in the Netherlands, is a method of opening vehicle doors when on the highway that automatically means the door opener will be aware of cyclists approaching from behind them. It involves using the hand furthest away from the door to open it, thereby turning the head towards the line of any approaching cyclist from behind.

2019 will see e-bike battery production start in Europe according to this Bike Europe article. News of the progress of the TerraE Gigafactory at Frankfurt in Germany looks to be good news on two counts for the e-bike industry and e-bikers in general.

Firstly the new batteries will use larger capacity 21700 cells meaning more power dense e-bike batteries in turn meaning a choice between more range or lighter e-bikes (a 21700-celled battery of the same capacity as a current battery will be lighter).

Secondly, with the four biggest makers handling about 80% of the market and all based in Asia and demand for batteries from other transport sectors predicted by some to explode over the coming years there have been concerns as to whether the European electric transport industry will be able to secure sufficient battery supplies to meet its electric transport needs in future.

The TerraE factory is a joint project between some 17 partners and includes both leading e-bike battery maker BMZ and the German federal government.

We recently reported on how BH Emotion’s new Atom model is one of the first 2018 models announced to use the larger 21700 cells.

No-risk Batteries on the Horizon

This BBC report details how an aqueous solution and chemistry to protect a lithium-ion battery’s anode from degrading in solution could lead to much less fire risk from the battery chemistry itself – currently largely gel rather than solution based. Sounds promising, though like many emerging battery chemistries it may still be a few years from commercialisation.

German firm Dethleffs have launched the world’s first fully electric motorhome – the Iveco camper which features 31 square metres of thin-film solar panels claiming to generate up to 3,000 watts of electricity.

Not applicable to e-bikes? Think again – Leaos’ solar prototype was launched earlier in the year and claims a 220km range (nearly 140 miles) from its 800Wh battery. The claimed extra range from the solar panel is 20km (12.5miles) daily.