It has been widely reported that British TV celebrity Simon Cowell broke his back after falling off an ‘e-bike’. He underwent six hours of surgery to insert a metal rod into his spine and is now, thankfully, up and walking again. 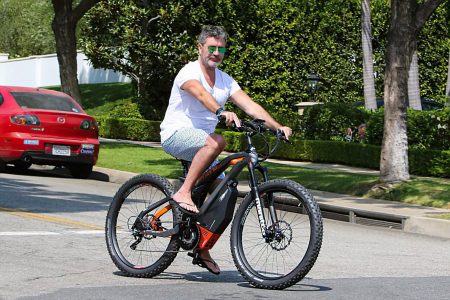 The mainstream media predictably produced many articles related to the ‘dangers of e-bikes’ or similar themes. 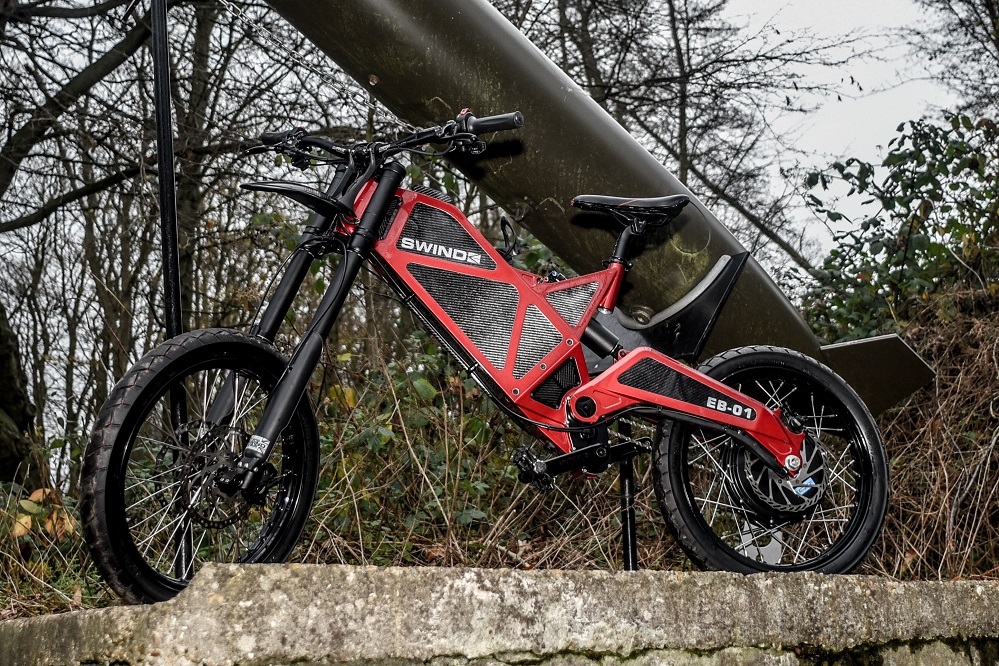 BUT, note the term e-bike in the first paragraph is in quote-unquote marks, as the machine in question was not what the e-bike industry and most legal systems would regard as an e-bike, or a legal one anyway. It was in fact a Swind EB-01 from UK-based Swind.  This £16,500 (US$21,600) machine has ‘a 15kW electric motor, delivering speeds of over 60mph (100km/h) and 80 miles (130km) of range’ according to Swind’s website.

Much of the specialist cycling press was quick to point out that, practically and legally speaking, the Swind is in many ways more akin to an electric motorcycle.

Eloquent e-bike advocate and Treehugger columnist Lloyd Alter really put it in a nutshell by including Swind’s own words in his article on the subject:

‘”The beating heart of this beast is an electrical motor with 15kW of power.” That is 20 times the maximum allowed for e-bikes in North America, 60 times the limit in Europe. It has been called “the fastest bike on earth”.

Indeed the Swind EB-01’s quoted 60mph top speed is almost 4 times above the EU limit electric assist for e-bikes (15.5mph) and three times that for class 1 and 2 e-bikes in the USA (20mph). Even compared to so-called class 3 e-bikes in the US (also called speed pedelecs) the Swind is more than twice as fast as these machines’ 28mph electric assist limit. There’s more on e-bike legalities and speed in the What is the Law and Practice on Superfast eBikes? below.

EBR would class electric two-wheelers that go much above 30mph as ‘superfast’. Whilst recognising there may be some benefits to moving at the same speed as faster-moving traffic, along with much higher speeds like those of the Swind come radically increased dangers, as outlined in our own article on the risks of superfast electric bikes.  The source of the added danger is simple, inescapable physics:

The kinetic energy of a moving object increases in proportion to the square of the speed. In other words, a bike traveling at 30mph will do 4 times the damage of a bike doing 15mph, and at 60mph you will have 16 times as much energy as at one-quarter of the speed.

The UK’s Bicycle Association were rather more staid in the language used but made similar points to much of the other cycling press:

‘This vehicle has, misleadingly in our opinion, been described as an “electric bike” or “e-bike”. In the UK, this vehicle would in fact be classed as an electric motorbike, requiring full type approval, registration, tax, licence, insurance and a motorbike helmet to be worn….The BA, on behalf of the UK cycling industry, would stress that what are usually referred to as e-bikes for sale in UK cycle shops have almost nothing in common in technical or safety terms with the electric motorbike which was ridden by Simon Cowell at the time of his accident.’

If all this still leaves you in any doubt check about whether the Swind is a motorbike or e-bike, check out the launch video from February 2018.

What is the Law and Practice on Superfast eBikes?

Mr Cowell was reportedly riding the Swind in the courtyard of his home in Malibu, California. Twenty-six U.S. states, including California, operate a three-tiered e-bike classification system which is largely the result of the great efforts of People for Bikes who have lobbied across all states to get this standardised ‘model law’ adopted. The three classes are:

Class 1: Pedal Assist
The electric drive system on the e-bike can only be activated through a pedaling action and is limited to 20mph and the motor must be rated at no more than 750 watts. Local regulations usually allow class 1 e-bikes on streets, bike lanes, multi-use bike paths, and off-road trails.

Class 2: Throttle On Demand
Motor assist triggered by a twist grip or similar (eg button or trigger). The motor system may also be activated through a pedaling action as with Class 1. Like class 1, limited to 20mph and the motor must be rated at no more than 750 watts. Usually allowed on streets, bike lanes and multi-use bike paths though restrictions may apply on off-road trails.

Class 3: Speed Pedelec
The electric drive system on the e-bike can only be activated through a pedaling action and is limited to 28mph and the motor must be rated at no more than 750 watts. These may be restricted by local traffic laws to streets only.

In Europe throttle control above 4mph / 6kmh is not allowed (at this speed it is really considered a walk-assist only feature) on most commercially available e-bikes, which are also limited to a pedal assistance level of 15.5mph / 25kmh and 250W rated motors. 28mph assist limit models (speed pedelecs) are allowed on a country by country basis and if allowed at all there are usually extra requirements for licencing and insurance etc. In both cases, 20mph and 28mph machines, pedals need to be turning for power to be activated above 4mph. 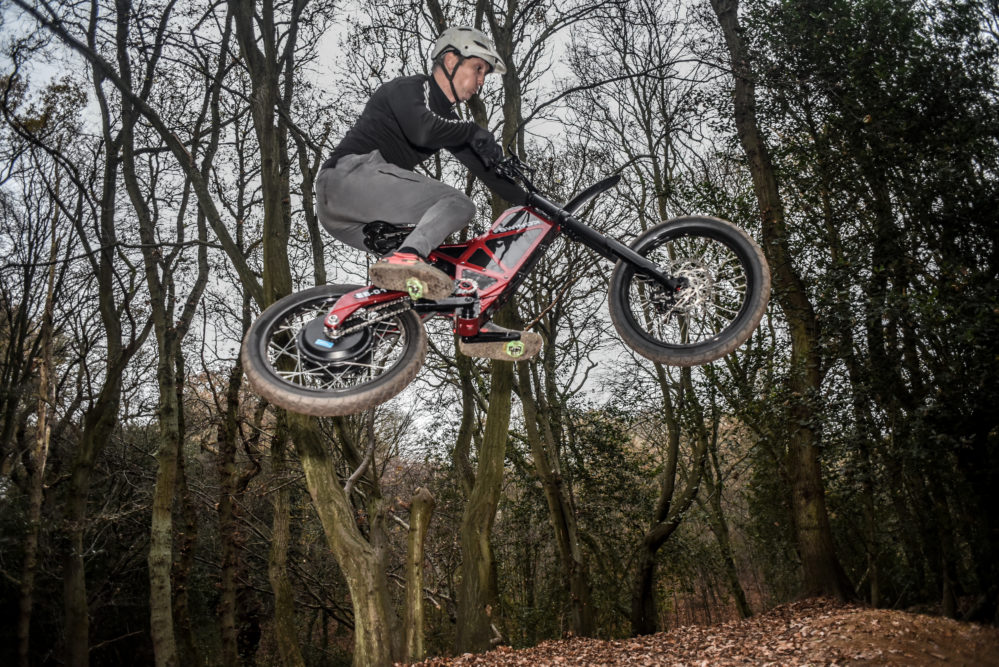 In other words, there’s no way the Swind EB-01 comes anywhere near any of these classifications – indeed it’s own website states ‘We want to point out that the use of EB-01 isn´t allowed on UK public roads, because this electric bicycle exceeds the legal speed limit of 15.5mph and it has more than 250W of power for an electric bicycle allowed on UK public roads. It is only allowed to be used on private, closed areas, sporting activities or on designated routes.’

Similarly, in the US, People for Bikes clearly class the Swind EB-01 as an ‘Out of Class Electric Vehicle (OCEVs)‘  – Classes 1 to 3 are technically classed as low-speed electric bicycles (LSEBs).

The UK government is also very clear on the definition of electrically assisted pedal cycles (EAPCs) or what would commonly be regarded as true e-bikes in the UK:

‘Any electric bike that does not meet the EAPC rules is classed as a motorcycle or moped and needs to be registered and taxed. You’ll need a driving licence to ride one and you must wear a crash helmet.’

In practical terms it is often difficult if not impossible to register the superfast or OCLEV type vehicles – of which the Swind is just one – in most countries around the world. Legislation allows for moped and motorbike registration based on the traditional gas-powered models which come with a VIN (vehicle identification number) and this legislation is often ill-suited to superfast electric two-wheelers which it was never designed to cater for. Hence Swind’s own disclaimer saying it is only suitable for use on private land in the UK.

E-bike, electric motorcycle, OCEV, LSEB – does it really matter what such vehicles are called? Isn’t this just a celebrity news story that is here today and gone tomorrow like thousands of other celeb stories?  Of course, this specific story may well disappear very quickly but it’s the long term effect that is more worrying for proponents of e-bikes.

If true e-bikes get continually grouped together in the public perception with Swind-style ‘out of class vehicles’ or ‘superfast e-bikes’ (call them what you will), then this will only serve to sow false fears about a ‘dangerous’ new mode of transport and potentially hold back the uptake of what is, in reality, a wonderfully simple, safe and effective way of getting about and enjoying yourself.