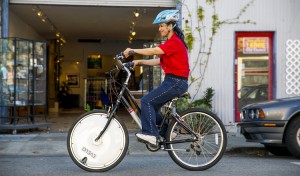 One of the many things people consider when making a lifestyle change is how to make their commute to work simpler and less of a hassle.

They think: wouldn’t it be great to eliminate the pain of being stuck in traffic and then parking your car. The expense of gas, maintenance, tolls and parking.

Or waiting for public transit and making connections that slow them down.

There are health reasons too. Why drive to the gym before or after work, again sitting in traffic when you can just get your exercise during the commute?

Often, they think about it, but then can’t figure out how to make it work. The distances are too long or the terrain too hilly.  Maybe they’re worried about how to deal with getting sweaty.

In this post, I’m here to show you that it’s possible for almost anyone to do at least some of their commuting by bike, particularly on an electric bike. In some situations, it may even be a year round mode of transportation.

There are three major areas of consideration when getting started:

First, you and your comfort.

Firstly, your bike needs to fit you well. Your clothing should also work for you, not against you. You need to be seen and safe to feel confident on the road. You need to know you “belong” on the roads and that they’re there for your use, no matter how you are traveling.

Let’s first address the elephant in the room: Sweat!

Most of us need to show up at work clean and not dripping in sweat. But how to do this?

Well, there’s many, many options, depending on your situation and facilities available to you.

Firstly, is there a place at your work to take a shower? Many workplaces have these and yours may be one of them. It may not be readily apparent, and you may need to go searching for it. Asking other cyclists at your workplace might prove enlightening. Or, ask the people in facilities or housekeeping. They might know as well.

But what if this isn’t an option? Well, all is not lost! One of the best inventions of the last 40 years is the now ubiquitous “baby wipe”. Keep a box of these in your desk or locker, and use one of the stalls in the washroom to freshen up. I like to wait a few minutes after I arrive at the office to cool down a little bit, and then change out of my cycling clothes, clean up using the towels and then get dressed. This works really well and nobody will ever know you didn’t just come straight out of the shower!

Here too, an electric bike is a tool that makes riding to work easier:

Just don’t sweat at all to begin with! When you’re riding in, take it easy and let the bike do the work for you. Pedal lightly, and dress in a way that keeps you cool. If you don’t exert more effort than you would by walking, you won’t sweat any more than you would walking. Often, it’s even less, as you’ve got that nice, cool 15 mph breeze coming over you. You’ll get your cardio exercise on the away home, since you have a shower there!

When dressing for a ride, obviously you need to take the weather into account.

One thing I learned after many years of traveling by bike is that when dressing for cold weather, it’s important to make sure not to over-dress. If you aren’t slightly chilly when you start out, I guarantee you’ll end up way too warm very soon, likely within a couple of minutes. Layers are also your friend. Dress in layers; that way if you need more or less protection, you can add or remove an item of clothing. You don’t want to have to choose between freezing in your tee-shirt and sweating like crazy in your down parka.

This is where the advice: “think outside the box” really starts to make sense. 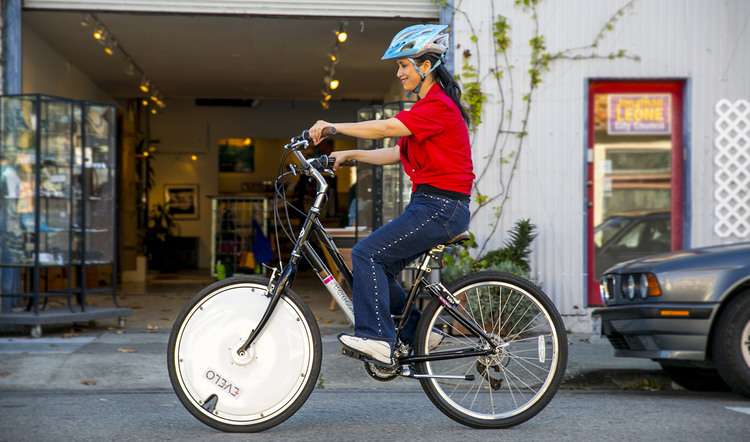 It’s important to remember that what makes a good car route may not be a good bike route. When driving, we tend to focus on the roads that get us there most quickly, and we also consider the same thing when riding. However, there are differences.

One of the big ones is traffic lights and stop signs. When picking a route for our car, we look for trips that have a minimum number of these, as every one of them slows us down. Especially at rush hour, it’s not uncommon in many places to have to wait several cycles of the light to get through the intersection.

On a bike, this isn’t as big of a problem. Just filter up on the right side of the road, being careful to watch for people turning right or opening car doors. This is important – getting “doored” is no fun, so when doing this, use caution. Some cyclists won’t even do this as they consider it too dangerous. I do it, and find it works for me, but I do it slowly and carefully.  Even if I go 5 MPH, that’s still faster than 0 MPH!

Please be aware that I’m not saying you should run red lights or blow through stop signs. This is illegal,  unsafe and inconsiderate. So follow the rules of the road. Since cyclists are less common than drivers, our offenses are more obvious to others when we make them. Don’t be one of those “bicyclists” that drivers hate! While this may seem unfair (what percentage of drivers on the highway are actually going the speed limit?) it’s a fact of life.  We’re doing something different, and our infractions are more noticeable. Plus, you don’t want to get hurt, either.

Another thing to consider when thinking about this is that since we aren’t as worried about stop signs, red lights, and speed limits, that the best route may not be on the main road, but through residential neighborhoods. In your car, you probably don’t want to drive on the adjacent residential streets with a 25 mph speed limit, when there’s a main road with a 40-50 mph speed limit right there. On a bike, you likely won’t be going over 20 MPH most of the time, so these speed limits don’t slow you down.

But, and this is the big point I want to make here: those roads are much more pleasant to ride on! So giving some thought to your route makes a big difference. Consider alternatives, like side streets,  roads with bike lanes, and bike paths as well. I often use the “bicycling” mode of Google maps. It tries to build a nice, safe route for you, based on feedback from users about the roads. You can also drag the route around something you would prefer to avoid.

Now, this is where electric bikes give us even more options. What if the pleasant route is longer or hillier than the shortest route? Well, with an electric bike, this is much less of a concern. You’ll be going faster, and have assistance up those hills, so it opens up new route possibilities for you.

Here’s a personal example: I regularly need to make a trip that is around 15 miles each way by the shortest bicycle-legal route (not on the interstate). I could take the busy, 2-4 lane state highway with the 40-45 MPH speed limit and minimal to no shoulder, (Route 28 north of Boston, for those of you who are curious), but I don’t.

Riding on that road is no fun at all, and I say this as someone who’s used to riding in heavy traffic and has done so for decades. Fortunately, there’s another route that I can take that is about 18 miles long, and has more hills. But with an electric bike, I care a whole lot less about these factors. Result: a much nicer route that doesn’t stress me out.

In some situations you may not be able to eliminate all of the undesirable parts from your route; for example, there may be a river you need to cross, and there are only a few ways over it. Still, doing your best to minimize them sure helps a lot!

On the other hand, there may be routes that are impossible or difficult in a car, but doable on a bike. Dead end roads often have a short, old trail that cuts through to another dead end road. Sometimes, there’s that one pesky one way block that’s in the way. Ride carefully on the sidewalk or walk your bike. By the way, please remember that pedestrians have the right of way, so ride slowly and cautiously if you plan to do this.

Also, consider recreational paths. Sometimes, even cutting across a city park on the pathways can make a route feasible on a bike. Again, even if it makes your route longer, you might find it much more pleasant.

Finally, consider time. Make your estimates of travel time reasonable, so you won’t constantly be rushing. If you need to be at work at 9AM sharp, make sure you plan to arrive with time to spare, especially at first. While this applies to any method of commuting (how often have you cursed the traffic making you late in your car?), it can be even more important when cycling. Having to take risks to get there on time is not something you want to be doing. On the upside, bicycle commuting times can be more consistent and reliable than other modes since unexpectedly bad traffic slows you down less. Soon, you’ll have a good idea of how long it takes you, and can adjust your departure time.

One final note: try out any new route out before depending on it to get to work on time. Pick a non-workday and see how it works out for you, or, if you can’t do that, at least leave twice as much time as you think you’ll need. I recommend the first option. Since traffic will likely be lighter, you can concentrate more on the ride, and less on timing and traffic. It also gives you the option to make changes. For example, you might spot a potentially better route than one you planned. This gives you the time to explore that option.

Now checkout Part 2 for tips on the proper bike commuting gear and maintenance!

Written by David Rodenhiser. David is the Customer Service Manager and Resident Blogger at EVELO Electric Bicycle company. When he’s not busy helping folks find the perfect electric bike for themselves, he writers a weekly blog column where he presents the best bike accessory reviews, useful apps for casual riders, and other tips for electric bike riders.