The Pacific Northwest is a land rich in cycling culture. For many here, bikes are used as the core transportation vehicle year-round and in every type of weather. Portland, Oregon embraces bicycles and electronic bicycles are going ‘on’ in a big way. One company at the heart of the movement is EcoSpeed. The company recently invited me over for a conversation and to go on a ride with some of their machines. EcoSpeed crafts power systems for electronic bicycles. Unique in many ways, EcoSpeed provides a combination of features that will compel many more people to incorporate the electric bicycle into their daily lives.

Brent Bolton is the founder of EcoSpeed. Bolton spent time with Intel and has a background ranging from electronics engineering to race car design. The consensus from those that install and use EcoSpeed in their businesses has been “The EcoSpeed system is assembled so well it’s almost over-built – and we consider that a really good thing.” Certainly, having a system like EcoSpeed available has broadened the scope of what is possible with electric bicycles, today.

EcoSpeed is positioned as a very high quality system and carries it’s price tag accordingly. Systems are priced on their website without batteries and vary from $2,495 – $2,995. Batteries can cost between from $200 to $1300 or more depending on customer needs. All told, one could expect to pay about $4,000 for a complete EcoSpeed system. For the price sensitive, it is possible to source batteries elsewhere, which can help a rider be up and running for under $3,000. With that said, carbon bikes today without electric assist can easily surpass the $10,000 mark. The way we see it, a cargo bike with EcoSpeed for example could carry a large payload, while cruising at speeds rivaling – or eclispsing – a carbon race bike with a world class rider on it. This, while retaining the feel, freedom, and ridability of a bicycle. Yes, the convergence of the bicycle, brushless electric motors, battery technology and bright minds are bringing us bikes that are more useful and fun than ever. 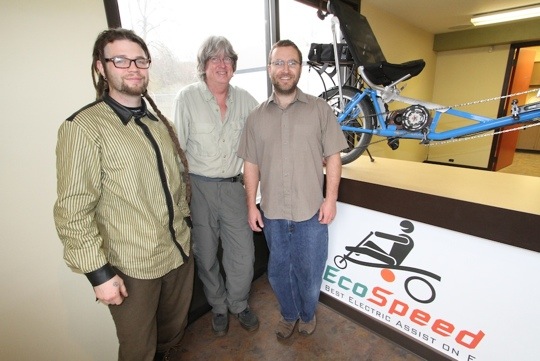 EcoSpeed is a mid-drive solution. Mid-drive motors apply power at the crankset as opposed to motors that are built into hubs at the wheel. There are significant advantages to a mid-drive system. First of all, the entire range of gears on the bike are usable. This is important any time hills and heavier loads are encountered. When speeds slow down, bicycle wheels turn slower. Hub motors are forced to spin at those lower RPM’s, which can quickly burden them. If a strong rider can continue to supply ample wattage to a hub motor under those conditions, they may be able to handle the terrain and load well. If a rider is not generating a lot of power on their own, or is carrying heavier loads, they can shift into a lower gear and the EcoSpeed motor will happily continue to spin in it’s desired range and comfortably keep a good tempo up the climbs. Torque? Not only is the EcoSpeed motor ‘torquey’, but the mid-drive allows for a 5x boost in torque from having all the bikes gears available. There is well over 100 foot pounds of torque being delivered to the drive spindle.

Another advantage of the mid-drive system is weight. The EcoSpeed kit (not including battery) comes in at about nine pounds. An equivalently powered direct drive hub motor can fall in the 16-22 pound range. When power is not being applied, some hub motors (direct drive) still have drag at the wheel. EcoSpeed does not apply drag at the wheel when power is not used. With two freewheels in the system there is no regenerative braking with an EcoSpeed mid-drive. EcoSpeed’s analysis has shown re-charging and braking functions of electric bicycle motors to be of minimal value in real world application.

Mid-drive systems like EcoSpeed do bring with them other inherent issues. Installation is more complex than a hub motor. If you have a shop like Splendid Cycles in Portland that specializes in systems like this, allowing them to do the work may be a good idea. Further, EcoSpeed puts out from 750-1300 watts. While the system itself is very robust, the drivetrain components that it transfers power to are not always up to the task. Of course, there are always variables and how the system is used ultimately determines product life cycles. There have been reports of Shimano Nexus hubs crying ‘uncle’ under the combo of mileage, heavy hauling, and EcoSpeed. Exactly how long and under what type of stress such breakdowns may occur, we don’t have good information on what one could expect. 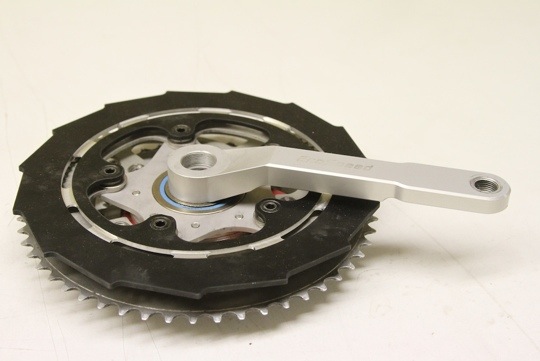 The EcoSpeed crank. This is a triple chainring crankset with guard and a fourth chainring built in that connects by a smaller chain to an adjacently mounted EcoSpeed motor. 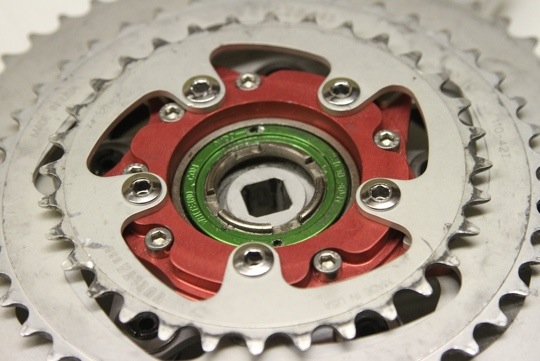 There is a high-quality White Industries freewheel body built into the crankset. Why is there a freewheel body in the crank? This is what allows crank-driven power to be applied to whatever gearing system the bicycle uses at the rear wheel. Whether the rider is pedaling or not, power can come from the EcoSpeed motor with a little move of the rider’s thumb. 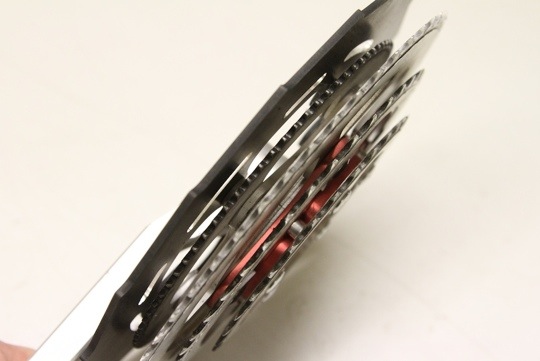 EcoSpeed uses the same motor across all bicycle platforms. Encased in an extremely durable housing that is finned for heat dissipation, the motor generates 1,300 watts. 1,300 watts is a substantial amount of power. In human terms, that is a figure generated by a strong bicycle racer in an all-out sprint for the finish. Having such a boost available with the push of your thumb, whether you are pedaling or not, is thrilling. More important, it is extremely useful. 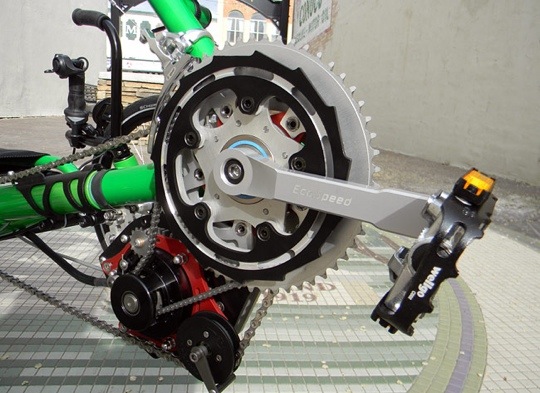 Now that’s a chainring. This image shows the system on a recumbent trike. Note the small drive chain that runs from the gear on the motor around the crankset.

Another unique feature of the EcoSpeed system is the controller box. Dubbed Velociraptor, the controller box allows EcoSpeed to program systems with software that helps performance in any given application. Because one motor is used throughout all platforms, Velociraptor allows for more ideal functionality on each different bike. The controller also monitors the motor and battery for reliability and safety. 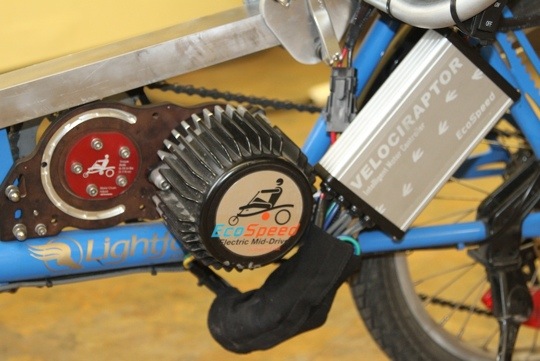 Controller box visible next to EcoSpeed motor on recumbent. 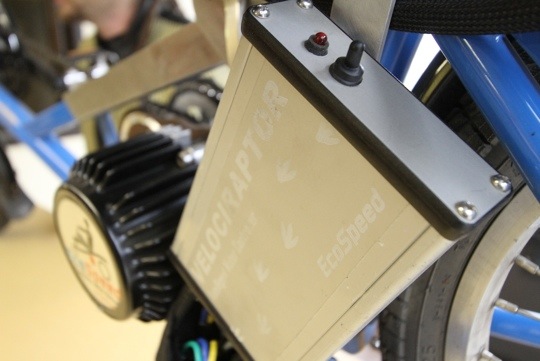 The controller box has a switch available for two different watt output settings. Standard kits can toggle between 750 and 1300 watts.

The standard EcoSpeed battery is a 48 volt, 12 amp-hour lithium tri-metal unit. EcoSpeed partnered with US battery maker AllCell to make certain the system delivers not only high power, but consistent reliability, lower weight, and maximum energy density. Making the switch to newer tri-metal (LiNiMnCoO2) technology allowed EcoSpeed to cut battery weight in half. Component quality throughout the entire EcoSpeed system is exceptional. The battery has a locking u-bolt to give owneres the ability to lock the unit directly to the bike. Battery weight is about 11 pounds. 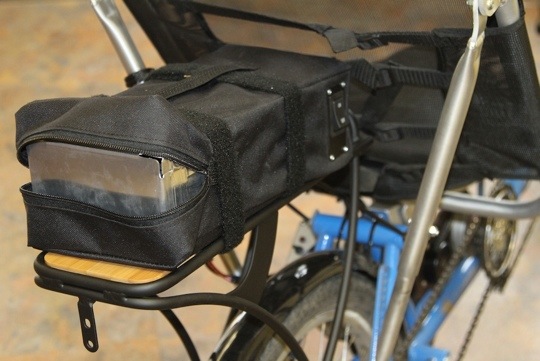 The 48 volt, 12 amp hour tri-metal (LiNiMnCoO2) battery is housed in it’s own protective aluminum box and Cordura cover. System on/off switch is visible to the right. This unit is plugged directly into a regular wall outlet and full charge is reached in about five hours. In standard configuration on a single bike (one battery, one rider, two wheels), range will be 30-40 miles on a single charge. Remember, that is always a subjective figure of sorts. When and how to use what’s in the battery is part of the enjoyment of riding. Used more sparingly, it could be spent over a much longer distance. 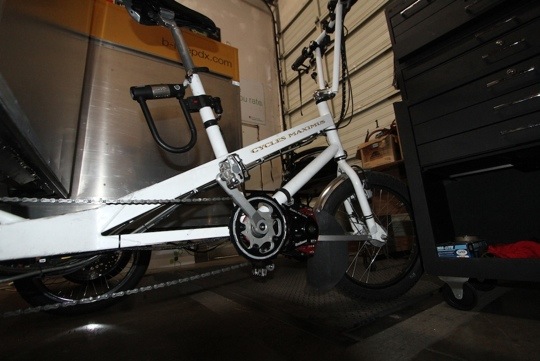 EcoSpeed system installed on one of the B-Line PDX delivery trikes. One of the most industrial bikes on the planet, this trike sees service daily, delivering payloads of 600lbs. That is in addition to the weight of rider and trike. Total weights en-route are often in the 1,000lb range, and the EcoSpeed system helps them move along in the 11-13mph range. 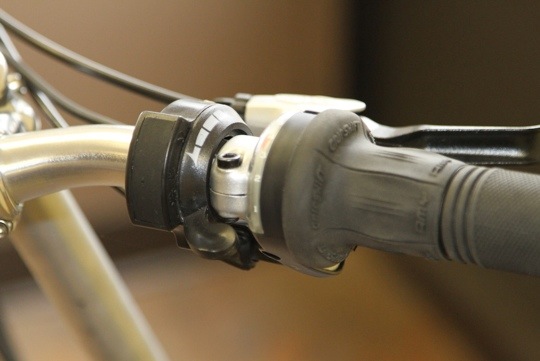 This thumb lever is where the magic happens. The lever must be held in place to add power. It’s easy to hold at every level and even low to mid-range boost is very usable. As soon as the lever is released, power from the motor ceases. 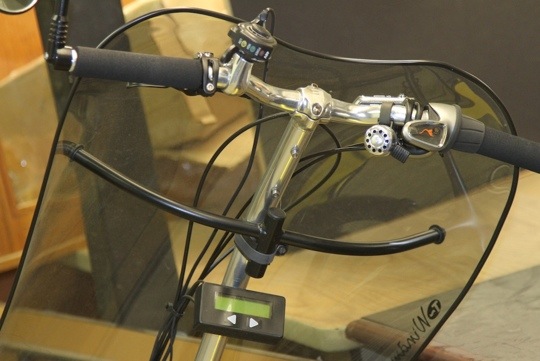 Dashboard on a daily-driver recumbent. Cycle Analyst digital readout is visible at center of stem, low in the image. It measures instantaneous, volts, amps, watts, accumulated amp-hours, and tracks battery charge-discharge cycles. Thumb power control visible by left grip. Riding this bike on a cold day with some rain, I was happy to have the fairing. Easily cruising at speeds of 20-30mph I noticed it was significantly warmer with the fairing. 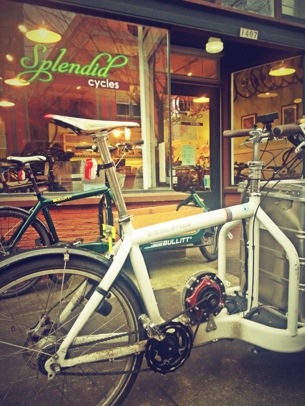 Splendid Cycles in Portland sells cargo bikes with EcoSpeed fitted and uses the system on it’s own shop bikes made on the Bullit frame out of Denmark. This is yet another great application of the product. These bikes are capable of sustaining speeds over 30 mph (bike in foreground would be more limited by the size of gearing in the internal rear hub), with load, given a pilot that can add significant wattage. Perhaps best of all, it will also claw it’s way up the steepest slopes at a decent pace – even with a trailer added. Splendid Cycles has created some very seductive additions to cargo bikes. One addition is a battery tray under the cargo box that conceals the battery and can hold about all the battery power one could possibly use. 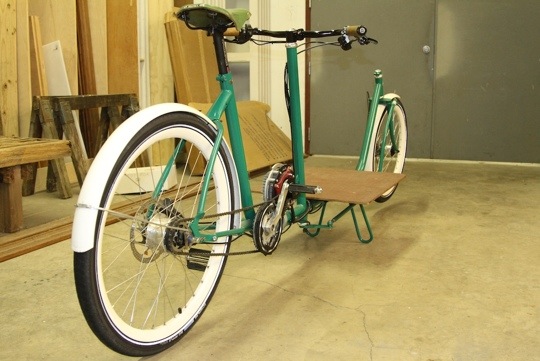 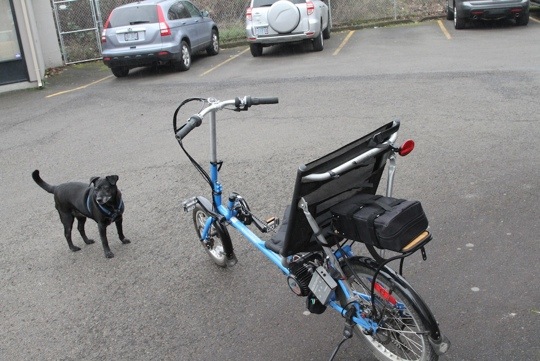 With a small front wheel, relatively small dog, and a small electric motor here, some might think there isn’t much power in this picture. They would be oh so wrong. 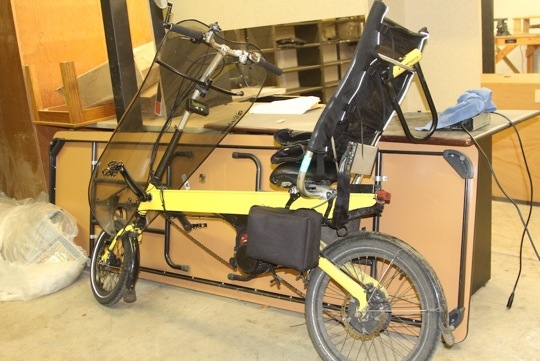 The everyday bike of EcoSpeed’s Tad Beckwith. This suspended Bike-E is fast, comfortable and useful. It uses a NuVinci drive. I could have used a bigger gear on the NuVinci when this bike was in full EcoSpeed stride.

Many different type bikes were ridden during my visit. I was struck by broad range of use of the EcoSpeed system. There is something here for nearly everyone. EcoSpeed has made it their philosophy to maintain the feeling of the bicycle, without trying to turn a bicycle into a motorcycle. They have done exactly that. Their level of build quality that is exceptional. This is a system that is worthy of fitting on the finest made and most beautiful bicycles, as well as the hardest working industrial applications. On cargo bikes, upright singles, tandems, recumbents, industrial trikes, pedicabs, and velomobiles, EcoSpeed delivers it’s performance with quality, usability, and longevity. 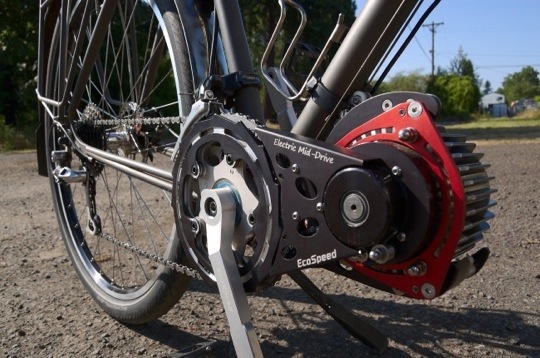 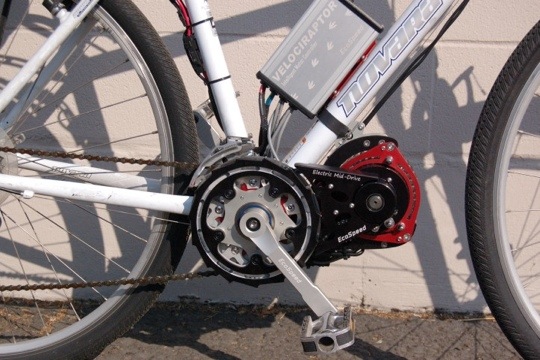 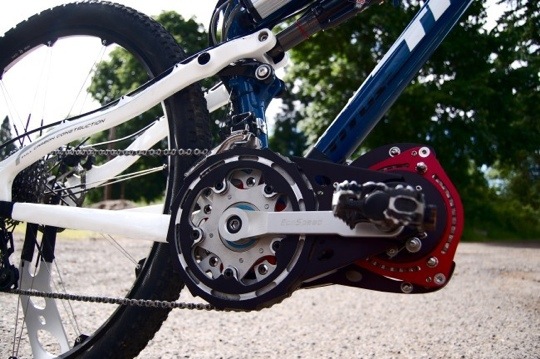 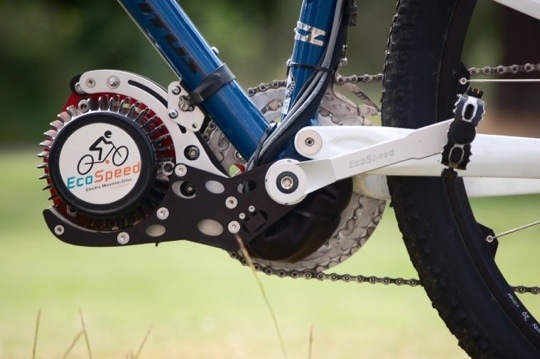