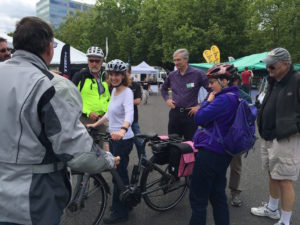 The city of Portland Oregon is all about bikes and it was fitting to have the Electric Bike Expo in this city that continues to push the envelope of bike infrastructure and bike culture in the U.S.

The highlights of the #PDX Expo were a policy makers ride hosted by the mayor of Milwalkie, a lot of local media coverage, a lucky Tempo eBike winner, Bixby the wild eBike traveling dog and her human, and many eBike smiles on and off the test track!

The Portland Electric Bike Expo was scheduled to coincide with May being Bike Month and all of the activities happening with The Bicycle Transportation Alliance’s Bike More Challenge.

Here is the report from the fun filled weekend of eBike activities! 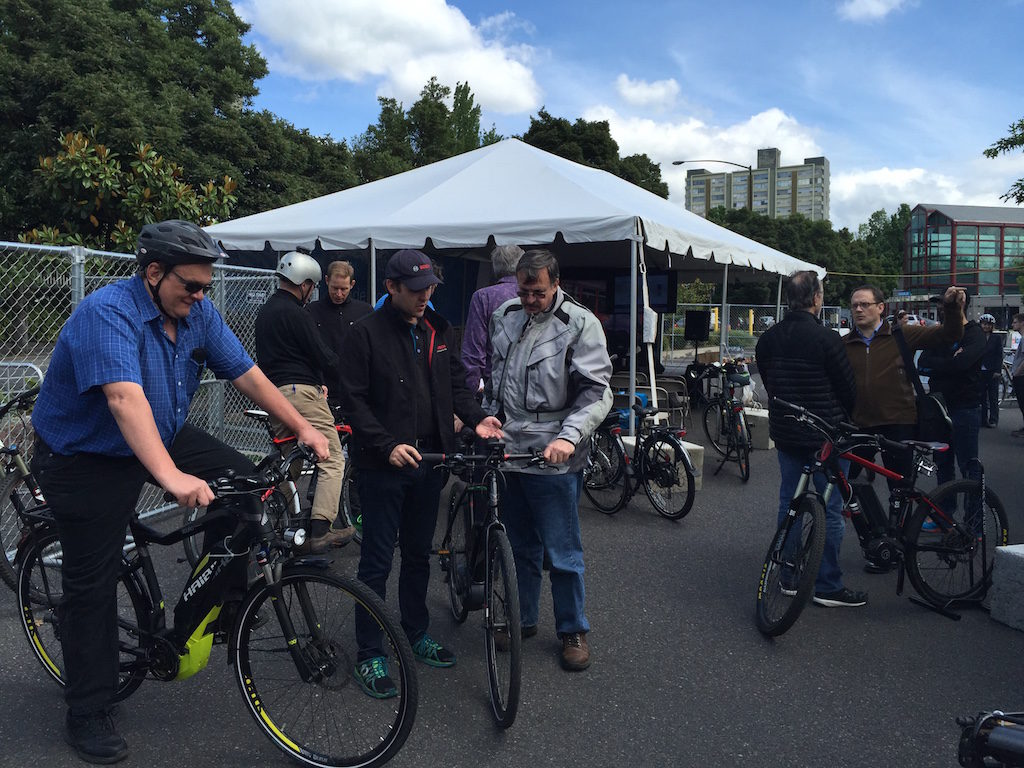 On Friday before the Expo opened to the public, transportation policy makers from around the Portland metro region had a chance to learn about and ride electric bikes. 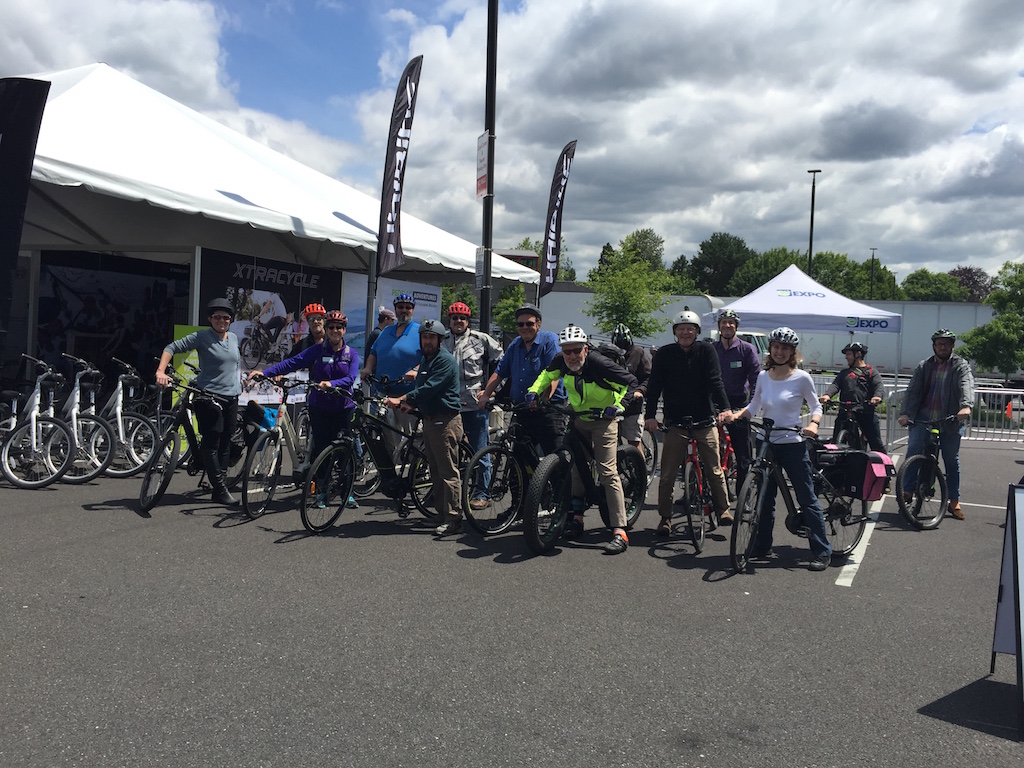 Mark Gorman, the mayor of Milwalkie (suburb of Portland), organized this ride with Rich Fein from Cynergy Electric Bikes (local Portland eBike dealer). Mark can be seen here in his yellow jacket and he is ready to ride! 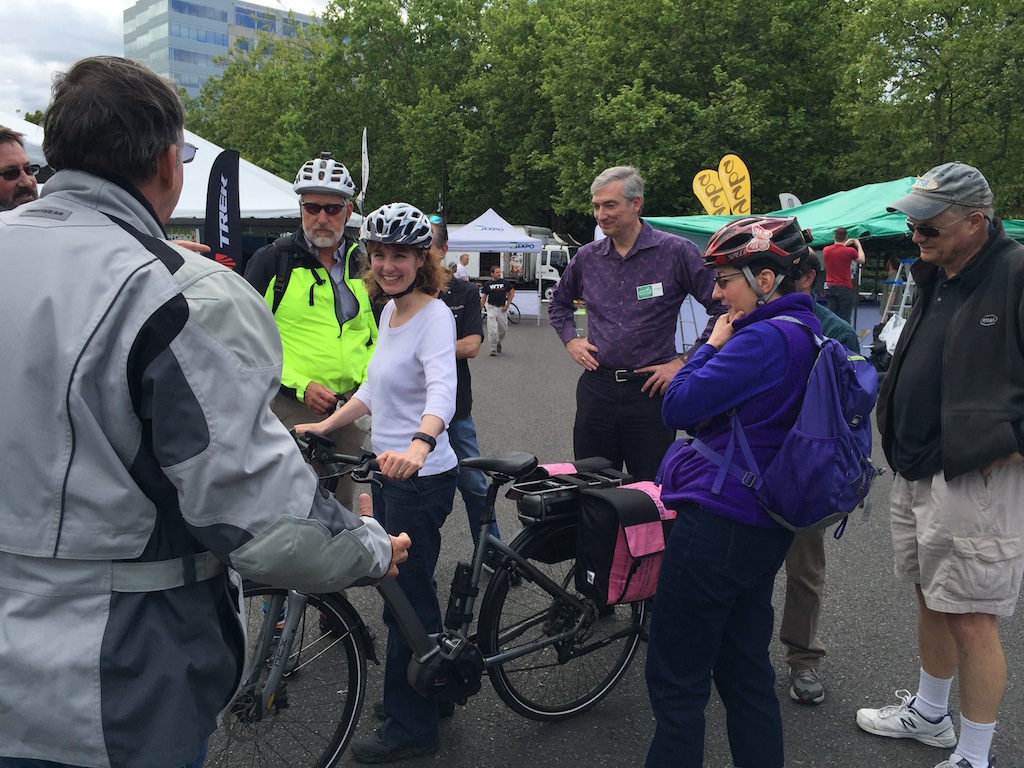 Many eBike smiles were seen from the attendees and there were some great discussions on and off the bikes. 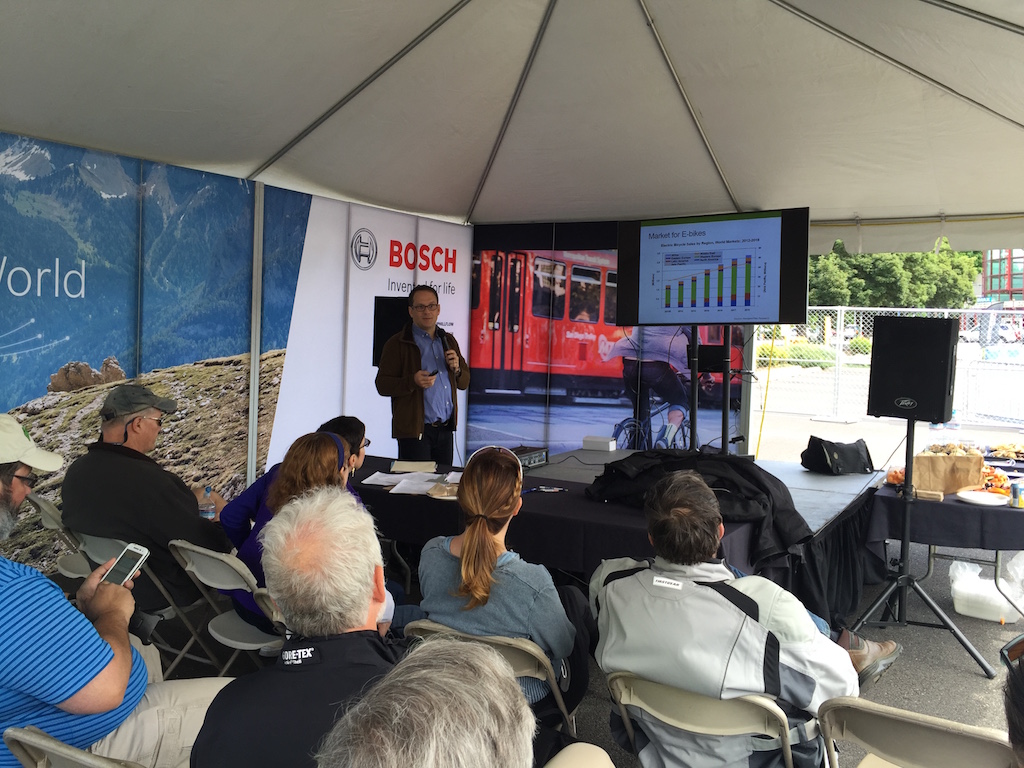 John MacArthur, Sustainable Transportation Program Manager at the Oregon Transportation Research and Education Consortium, presented some of the findings from their eBike research that indicates that electric bikes enable more people to ride bikes and that they ride more often. Here is more information on the eBike research that John is working on in the Portland area.

The catered lunch for the ride was delivered by bike; how Portland! 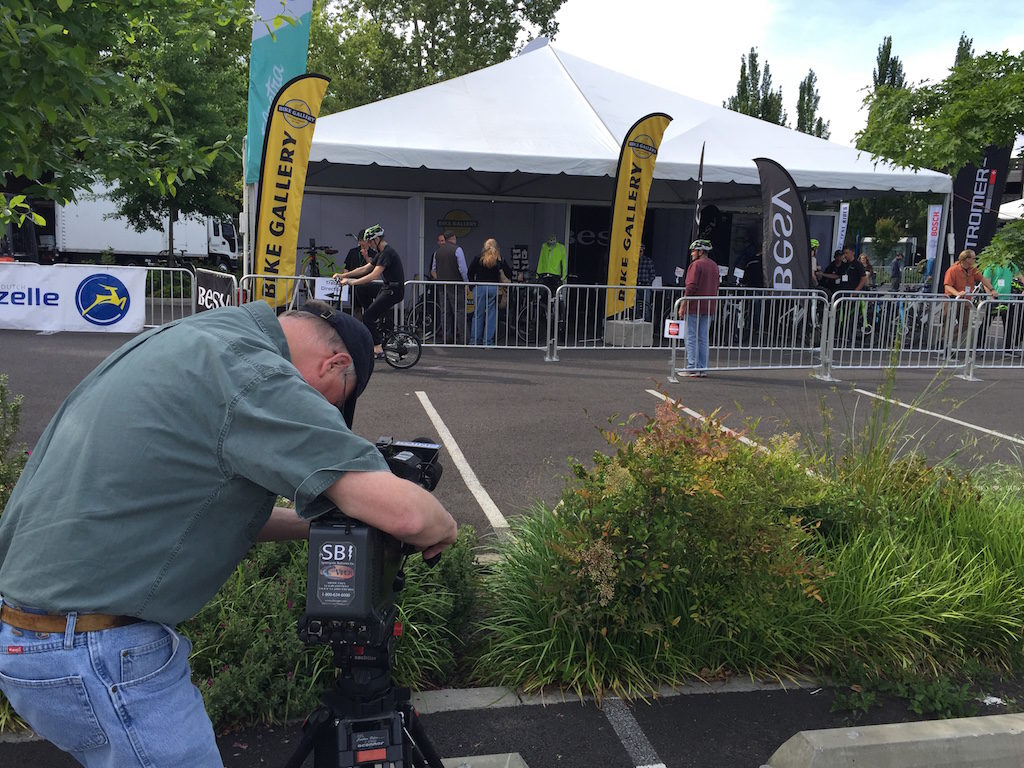 The Portland media was impressive with 2 visits from the local CBS channel, the local NBC channel, Oregon Public Radio, and Bike Portland posting 2 great articles about the Expo:

Dispatch from the Portland Electric Bike Expo (photos and video)

What I learned at the Portland Electric Bike Expo 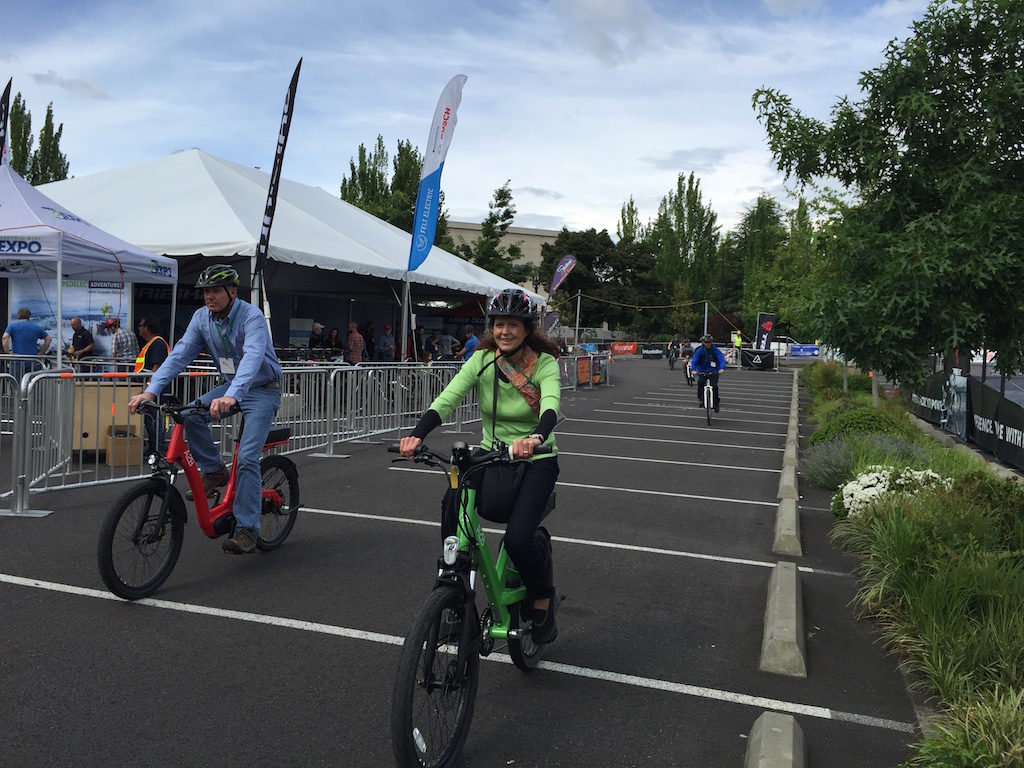 The test track had a long stretch to get the bikes up to speed. 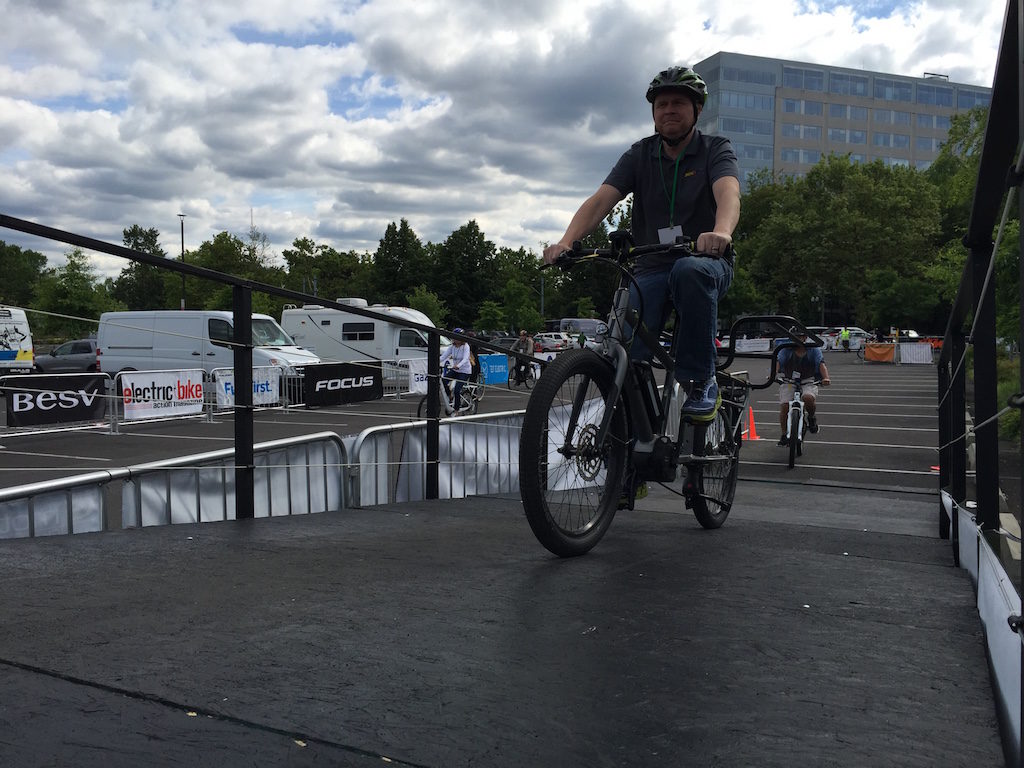 The “hill” was a popular feature to test the hill climbing capability of each bike. 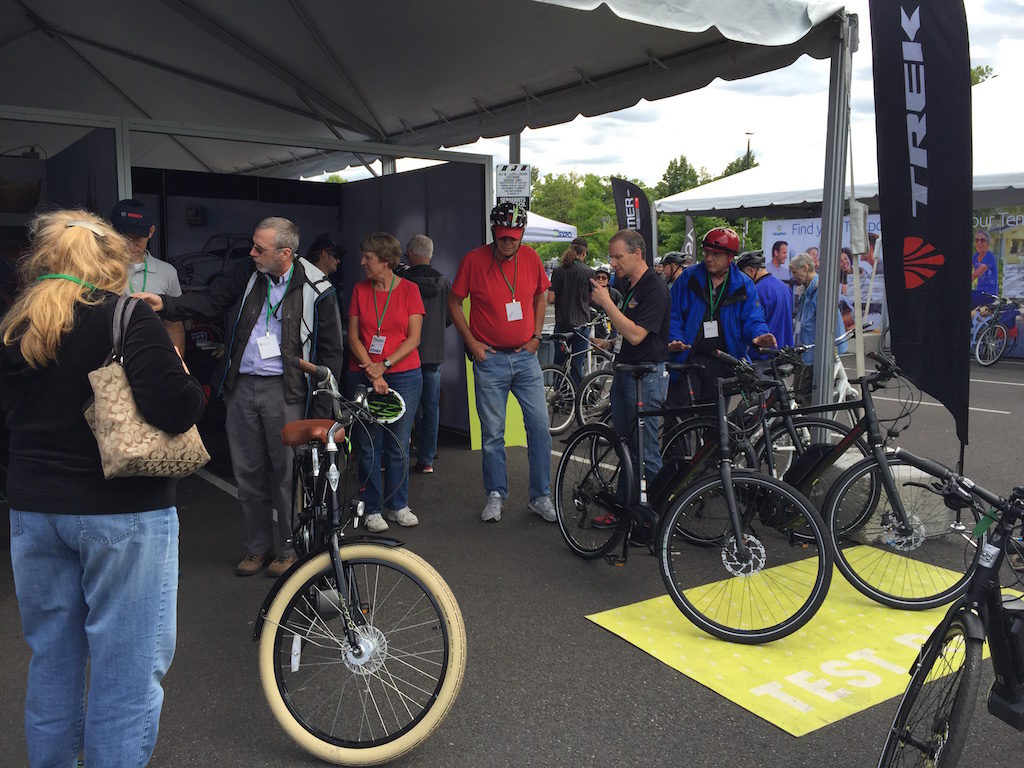 Representatives from the electric bike companies were on hand to talk with attendees about their e-bikes and set them up for test rides. 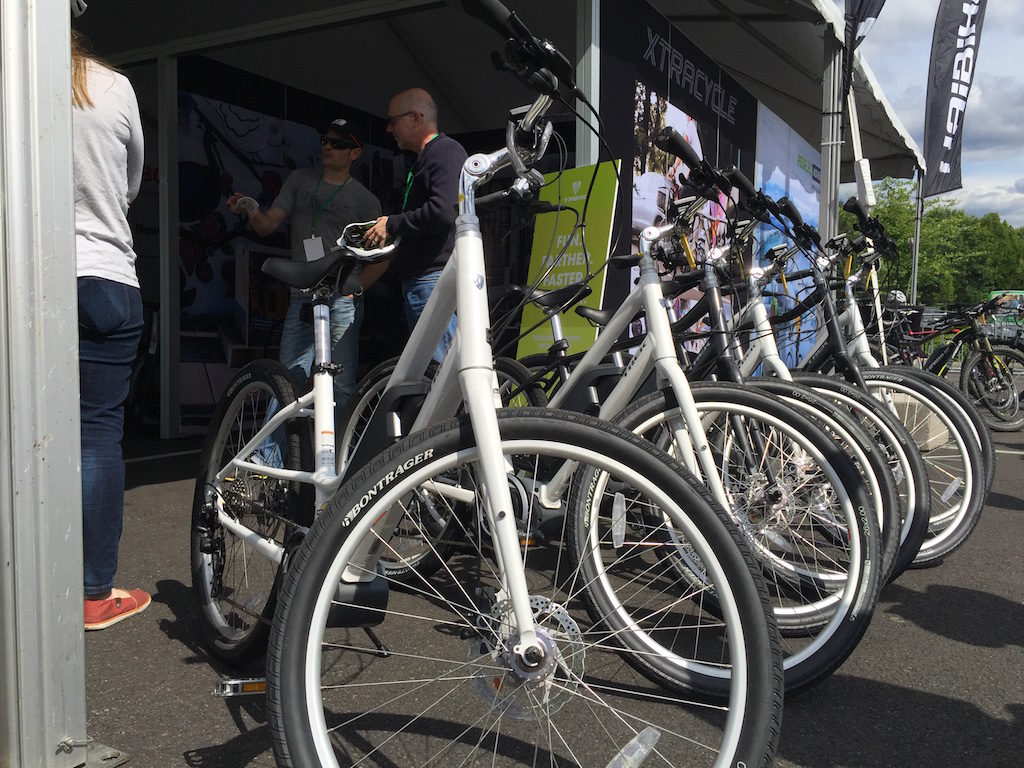 Tempo Bicycles raffles off one of their Santa Barbara or Carmel electric bikes (worth $4,000!) at each Expo for charity and in Portland the local charity was The Bicycle Transportation Alliance. 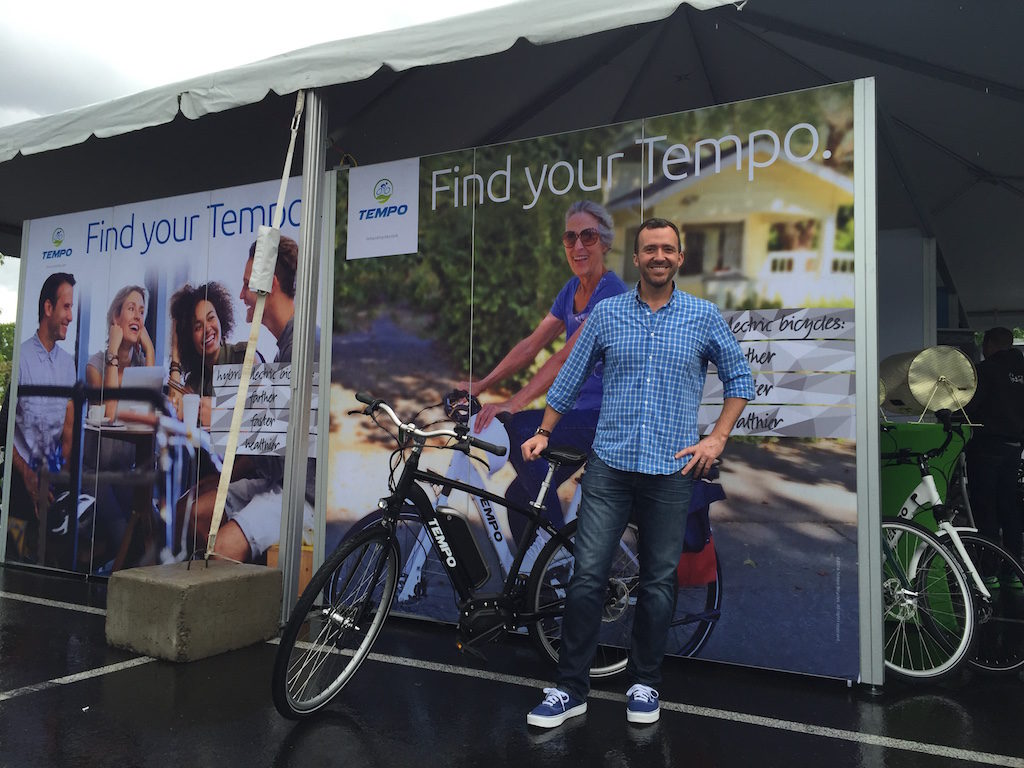 Christopher was the lucky winner of the Tempo Carmel and he was very excited because he has been wanting to buy an eBike for a long time. 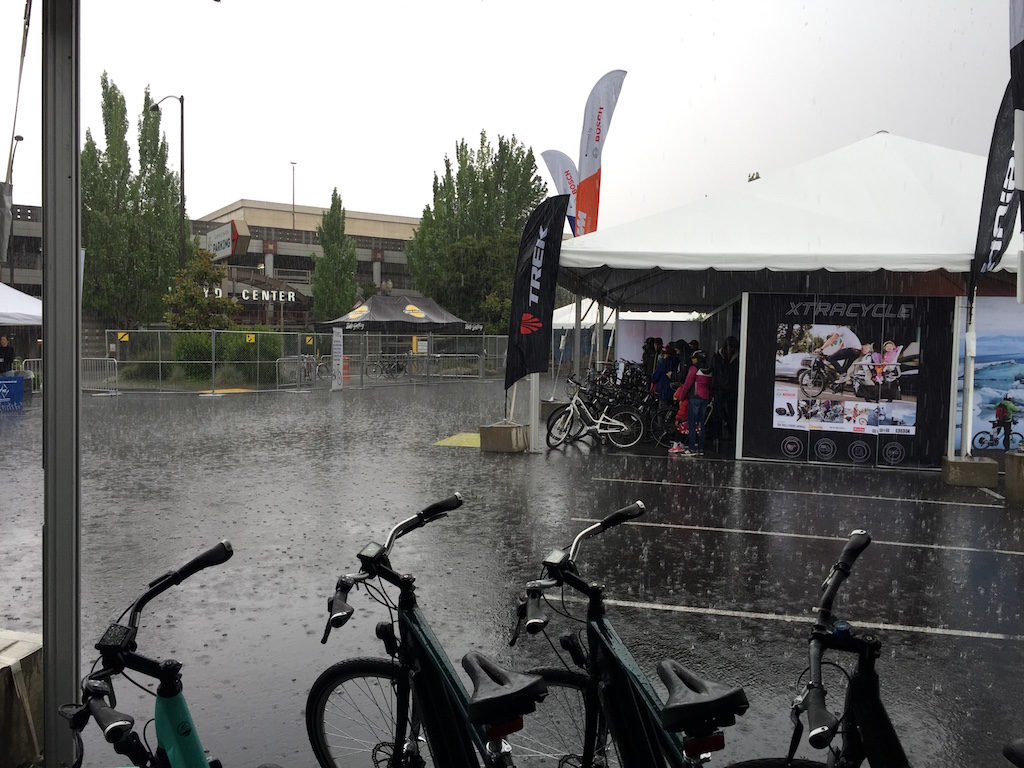 As expected the Portland Expo had its moments of rain and most of those moments were uncharacteristically intense segments of rain which probably worked out better than the typical Northwest all day drizzle. After the intense rains it generally cleared out and was good riding weather. 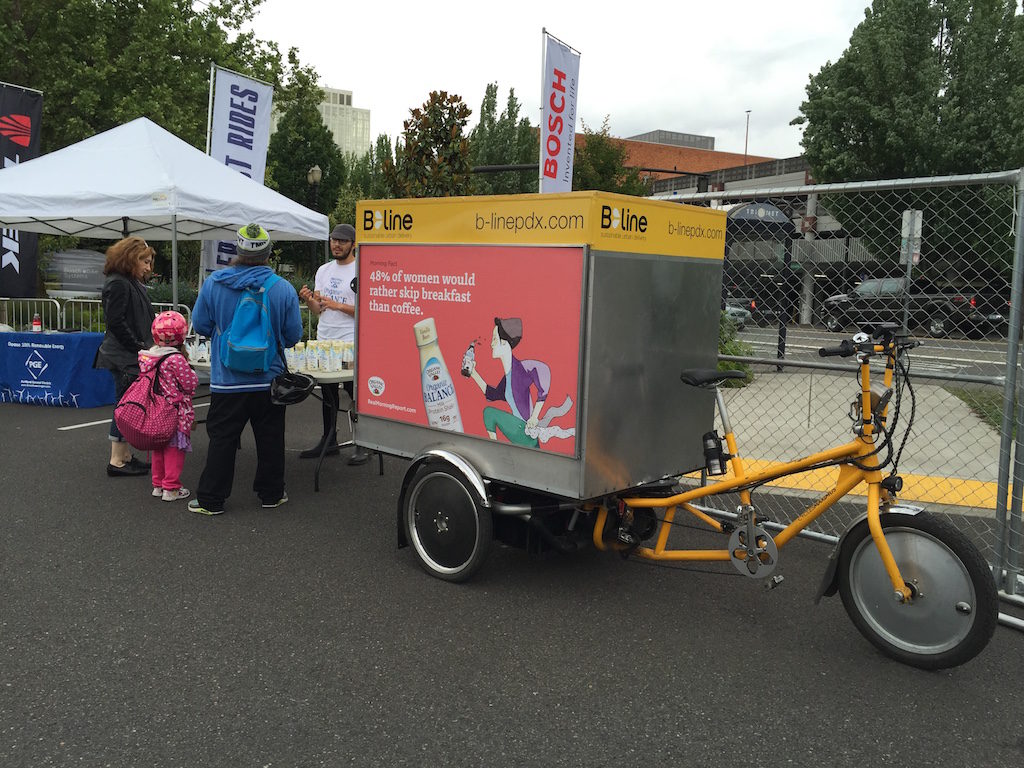 Local e-trike delivery service B-Line PDX was at the Expo on Saturday and Sunday afternoon with free Organic Valley Balance protein shakes for Expo attendees to try and they quickly ran out! B-Line does a lot of local business to business deliveries in Portland and they also have a advertising banners on the side of their trikes that account for a significant portion of revenue in their business. Checkout this full report on B-Line Sustainable Urban Delivery. 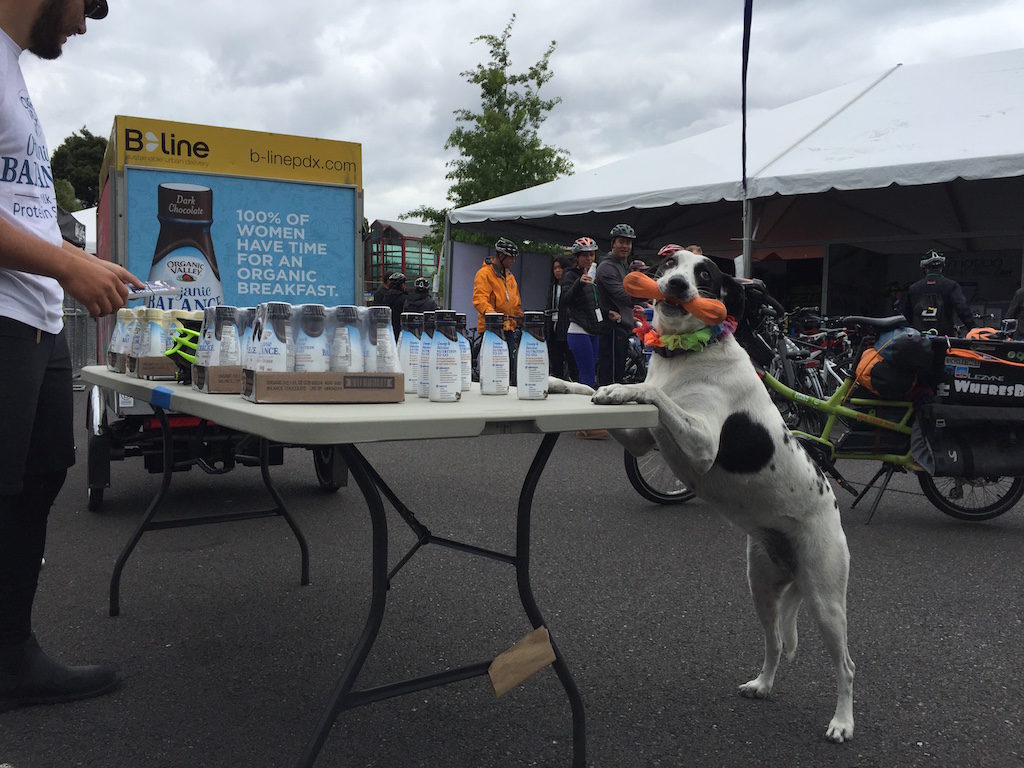 Even Bixby lined up to get her shake! 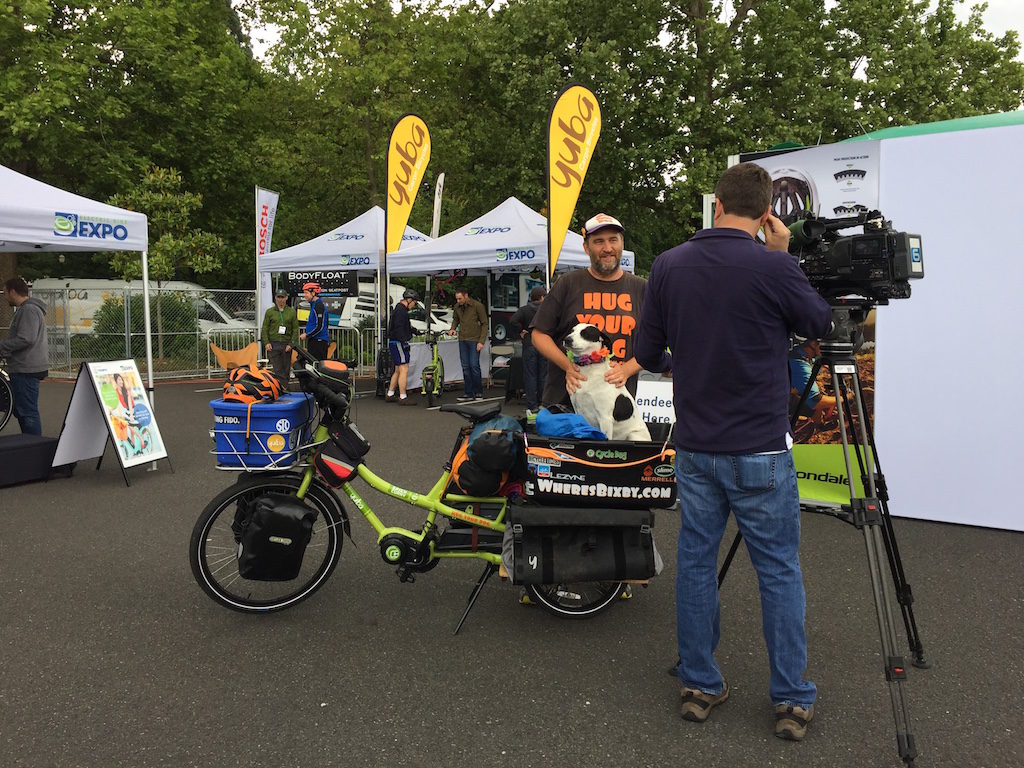 Bixby the wild eBike traveling dog and her human Mike Minnick were at the Portland Expo after they kicked off their 10,000+ mile eBike tour from the Palo Alto Expo in April. Mike and Bixby enjoyed their ride up from Northern California through Oregon to Portland. They also enjoyed some time in the Portland media limelight! Here is a full report on Bixby and Mike with a video from the Houston Expo.

There was a great assortment of local eBike dealers at the Expo. Cynergy Electric Bikes, the eBike Store, and the Bike Gallery were all in attendance with a wide variety of bikes and accessories.

During my time in Portland I had a chance to check out some of the impressive bike infrastructure that makes the city one of the best biking cities in the U.S. 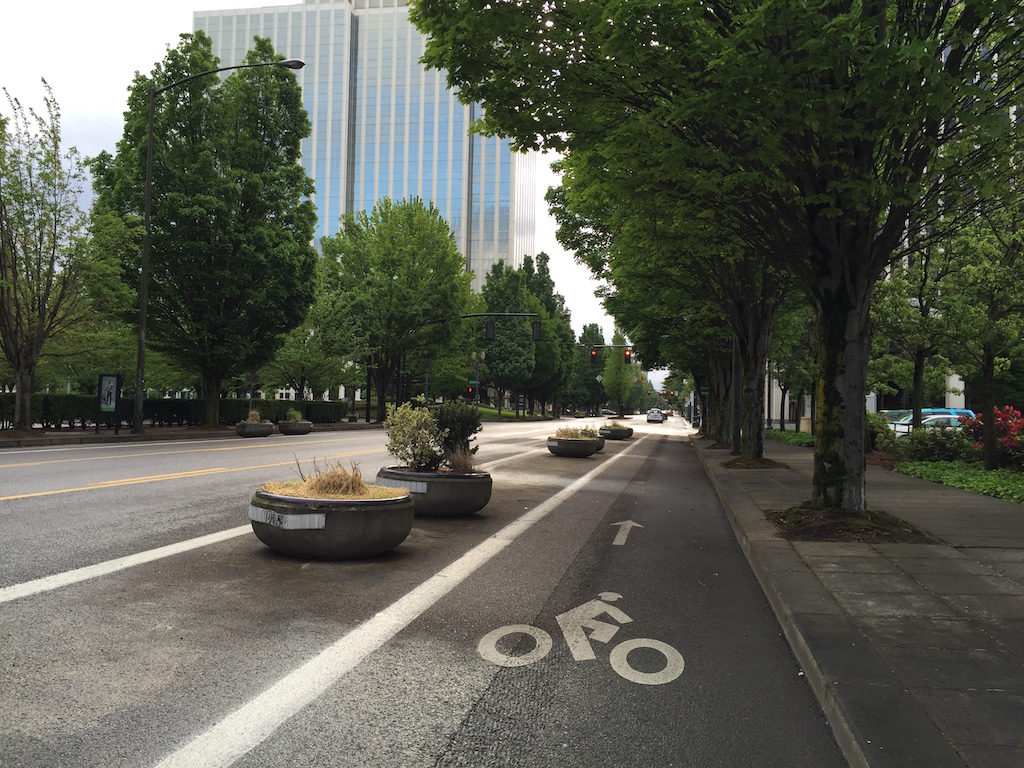 Close to the Expo in the Lloyd District were a number of separated bike lanes that used concrete planters to create a distinct separation between the car lane and the bike lane. 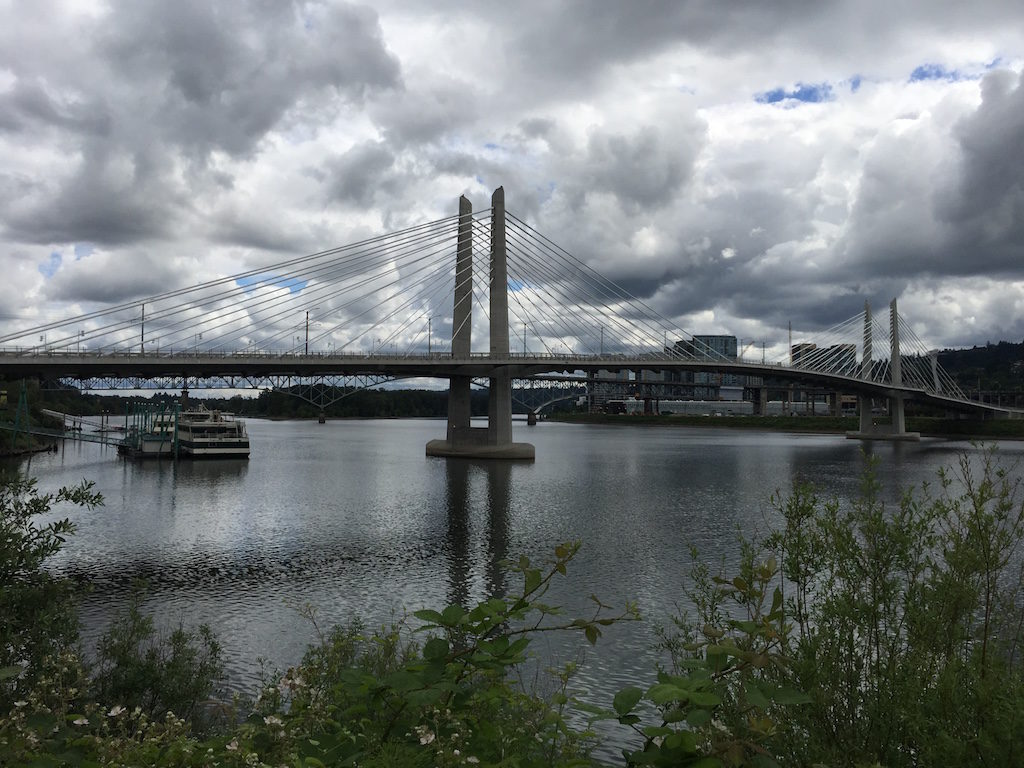 Portland is known for the many bridges that connect the West and East sides of the city and last year was the opening of the Tilikum Crossing bridge that is only open to mass transit (train, street car, buses), bike, and pedestrian traffic.

It is a very impressive bridge that connects OHSU on the West side to OMSI on the East side. 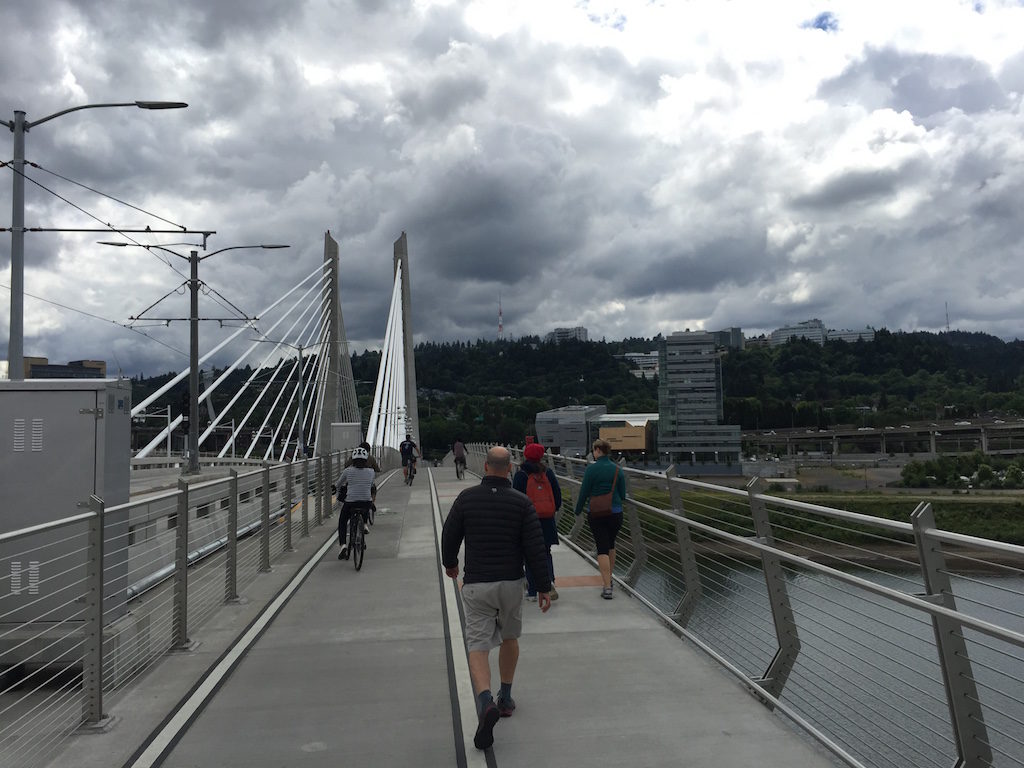 It is remarkable how quiet it is on the bridge with the lack of automobile traffic and the views from the bridge are great; on a clear day you can see Mt. Hood!

Overall the Portland Electric Bike Expo made an impact with many people enjoying the wide variety of eBikes to ride, the policy maker’s ride, great local media coverage, and the local Portland style that makes the city a very bike friendly place!

Checkout an Electric Bike Expo event near you. Next up are: