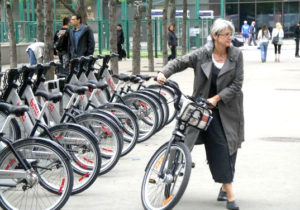 Imagine this: Instead of owning an electric bike you are able to “borrow” one for a while to run errands or just cruz around town.  After you are done using the bike you return it to an electric bike sharing station and you go on your way.

I am excited about this because it is being tested at a university campus (a great place for e-bikes) to determine the pros and cons of running an electric bike sharing program.  The use of electric bikes adds some complexity (battery charging) as well as some conveniences (e-bikes allow more people to ride bikes).

The combination of mass transit (bus, train, subway, etc.) with electric bike sharing stations at convenient locations could provide a nice alternative to driving a car.  This type of program could work well if you are visiting a city and need a way to get around quickly.

I am also excited to see something like this going on because it will give people a chance to experience how useful electric bikes can be in a real life situation instead of just a test ride around the block.

Bike sharing programs have had their challenges in the past with vandalism and theft but it looks like the University of Tennessee is aware of that and will work on solutions to these problems.

The electric bikes they are using are Izip’s from Currie Technologies and they will also be testing some traditional bicycles from Marin Bikes.

Check out the project’s website for more information on this exciting new program!