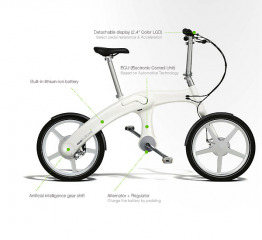 Recently the Mando Footloose series hybrid electric bike was announced and it is definitely a paradigm shift in the way we think about electric bikes.

The series hybrid type e-bikes have an alternator at the cranks that creates electricity from your pedaling.  The bike then uses that electricity plus the electricity in the battery to power the motor of the bike.  This type of e-bike eliminates the typical bicycle drivetrain (chain, chainrings, cogs, derailleurs, shifters, etc.)  Checkout the Mando Footloose for more detailed info on a series hybrid e-bike.

A friend of mine, David Calley, who is very technically minded, mentioned that he was very excited about this new style of e-bike because the efficiency of this system could be better than the typical “parallel e-bikes”.  They are considered “parallel” because you generally have a drivetrain for your pedaling and an electrical drivetrain that operates independently.  The series hybrid combines the energies into one electrical system to power the bike.

Warning!  This gets technical!

Please note, this changes with geared motors which typically have one way clutches. They present a more subjective analysis, so I have chosen to focus on comparing the direct drive hub motors.

In both cases some of the “electrical” losses that occur are the same.  The motor “core” losses are essentially the same whether the electric motor is delivering any power or not.

For the electronics, in many cases, they stay “on” to be ready to add power unless they are powered off so the parasitic losses remain in both ebike cases.

Putting all the power, both human and from the battery, through the direct drive motor we add losses due to resistance, but not core losses. In other words, if there were only core losses in the motor, the efficiency would rise because we are dividing more power by the same losses.

If the motor does not need to increase in torque and power because it is already sufficient, the resistance losses will rise and as a percentage, core losses will fall.

In the electronics, the losses are similar in that some occurs whether only a small amount of power is flowing or if higher power is being delivered. So again, only essentially increased resistance losses occur. The efficiency of the electronics may rise or may fall, but the effect should be small.

Now for the losses in the chain drive. Most believe that bike gearing is nearly perfectly efficient. They are quite efficient and it is difficult to get the information. I will have to dig to refund the sources, but surprisingly it is not uncommon for bike gearing to drop into the 80s of efficiency.

Higher losses occur due principally for two reasons. One is when the chain has is unaligned.  A good rider can minimize this and less experienced riders will likely not be as aware of the losses and wear caused by it.

The other factor is a small gear (chain ring) diameter. These are necessary for higher speeds. Small gears cause the chain to have to bend each link more and this causes higher losses. Just to clear up the inevitable question, I have not read that lubrication has a measurable effect on efficiency.

With that all said, which system is more efficient will depend on the design qualities of the system primarily. I believe that a leading edge series hybrid hub motor eBike can be designed with better real world efficiency than a parallel (chain drive) eBike.

There is more that is important about the comparison.

The series hybrid rider will not feel the positive gear solid connection to the wheel of the parallel bike. It will tend to feel more like the chain has been replaced by a bungie cord. This can be adjusted in software, however the peak torques a rider will occasionally output are so high that its unlikely a designer would chooses such a large generator to accommodate them.

You can always be in the perfect “gear”. The programming can be set up so that the cadence is always just where if feels right and is easily adjusted.

The riders output power can be higher or lower than what is required so the ride can be much more about how much energy the rider wants to exert compared to what the path and/or wind dictate.

At this point the costs of traditional quality bike parts have been refined to very high levels. New types of equipment such as automatic shift system start out very expensive.

The series hybrid would be similar. For a higher torque bike where the motor is already sufficient, the costs may be very similar between a series hybrid and a chain hybrid.

In the long term I would not expect to see a significant cost difference between them. That said, eBikes are still at a very expensive point compared to non-electric systems. The value of eBikes will steadily rise in the coming years.

Less maintenance! There should be no maintenance for the drive. There is nothing to adjust or align. There is no chain to stretch and chain rings will not wear or get damaged by rocks. There are no cables to the derailers (derailleurs) to get gummed up, adjust or replace. The motor and generator add no moving parts to wear.

David definitely brought up some good points to consider when comparing the series hybrid to the typical “parallel” type electric bike.  The series hybrid bike is pretty new and it will be interesting to see how they perform in the real world after a number of riders have put many miles on them.

I hope to review a few of these bikes in the near future and provide you with my thoughts on these new e-bikes.