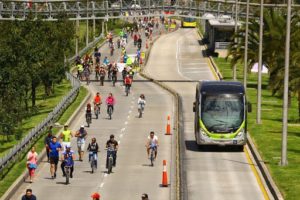 Countries across the world are starting to consider how to relax coronavirus measures as they look to head out of a lockdown situation safely and in a way that minimizes the risk of a second wave of infections.

It has become clear that ‘alternative’ transport could play a big role in these plans, as authorities look for ways that people can move around the world’s cities with a minimum of risk.

The need for exercise during the lockdown situation has been a central message for governments around the world in advising their citizens in how to deal with the restrictions.

The US’s People for Bike’s has these useful tips on safe cycling whilst social distancing.

Keeping 2 meters from others is commonly prescribed government advise and of course cycles and e-bikes allow you to do this easily provided the cycling environment allows space for you to do so.

This has clearly been a problem in some cities and urban authorities have made measures to increase cycling and walking space in numerous cities – to give just a couple of recent examples on top of the many we have already given in EBR news reports:

And just five minutes websearching reveals there are many, many similar examples from around the world of cycle infrastructure ‘popping up’ to cope with the change of travel habits occasioned by the virus crisis.

It’s clear looking at countries around the world that good, safe cycle infrastructure is a basic building block for getting more people cycling and e-biking, though by no means the only one.

What are the prospects of these apparently temporary infrastructure gains becoming permanent, or at least providing the impetus for a sustained programme of infrastructure building?

If, as it seems, social distancing whilst traveling may be with us for many months to come, either on a prescribed or a voluntary basis, how might this change towns and cities around the world in the longer term?

Once people get used to the benefits of safe two-wheeled exercise and cleaner air will they actually want to go back to mass transit and motor vehicles?

We look at examples from around the world that suggest perhaps not.

A New Urban Environment and Financial Support for eBikes?

This Bike EU report details how an Italian government taskforce are looking towards bicycles as a safer means of transportation in cities and how specifically there are calls for financing of e-bikes to avoid crowding on public transport. 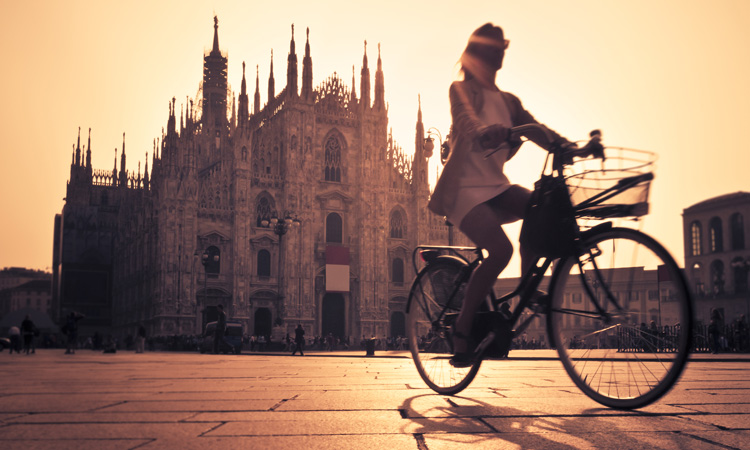 May 4th will see Italy gradually relax the restrictive travel measures and the article reports ‘The taskforce will be handed ministerial powers to help rebuild the country during ‘phase 2’ of the coronavirus crisis re group’s objectives is to reorganise travel and regulate public transport and e-bikes may have a part to play.

Electric bicycles have been touted as a means to solve the problem of overcrowding of public transport in phase 2.

The hypothesis was revealed by Giuseppe Sala, mayor of Milan, in his daily video, after speaking with the Vittorio Colao task force.’

Specifically the group is looking into the possibility of financial support to help purchases of e-bikes so people feel safe and enabled to move around again quickly and easily. E-bikes indeed provide a ready solution.

The taskforce will be based on the infrastructure work done during the outbreak in Milan – the city’s Strade Aperte plan brought in during the crisis includes low-cost temporary cycle lanes, new and widened pavements, 20mph speed limits, and pedestrian and cyclist priority streets.

Could this be the basis for new look post-virus cycle-friendly Milan?

Work could start on an 5 mile stretch of Corso Buenos Aires, one of the city’s most important shopping streets, by the beginning of May – with a new cycle lane and expanded pavements.

This Guardian article details the work done by the city so far and how it could be a model for other cities’ transport plans post-pandemic. It tells us:

‘Janette Sadik-Khan, a former transportation commissioner for New York City, is working with cities including Bogota and Milan on their transport recovery programmes. She says Milan, which is a month ahead of other world cities in the trajectory of the pandemic, could provide a roadmap for others.

“The Milan plan is so important is because it lays out a good playbook for how you can reset your cities now. It’s a once-in-a-lifetime opportunity to take a fresh look at your streets and make sure that they are set to achieve the outcomes that we want to achieve: not just moving cars as fast as possible from point A to point B, but making it possible for everyone to get around safely.

“I know we’ll be looking to Milan for guidance from New York City.” ‘

Indeed, New York itself has made a start with the closing or modifying of 40 miles of street to expand space for pedestrians and bikes. The goal, Mayor de Blasio says, is to expand the network to 100 miles before the end of the pandemic. After the political struggle that took place to bring in the lanes, expect another battle for more lanes post-virus. 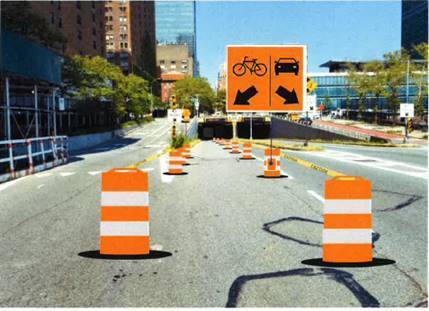 And according to this BBC report there are signs that Paris mayor Anne Hidalgo will strive to make more cycle lanes a permanent fixture of the French capital:

‘The French capital Paris is barring private cars from one of its major central roads, the Rue de Rivoli, which will instead have separate lanes for bicycles and for buses, taxis, emergency vehicles and certain deliveries.

The measures will remain in place for the duration of the pandemic but should they prove successful they will be made permanent, Mayor Anne Hidalgo said on Thursday. 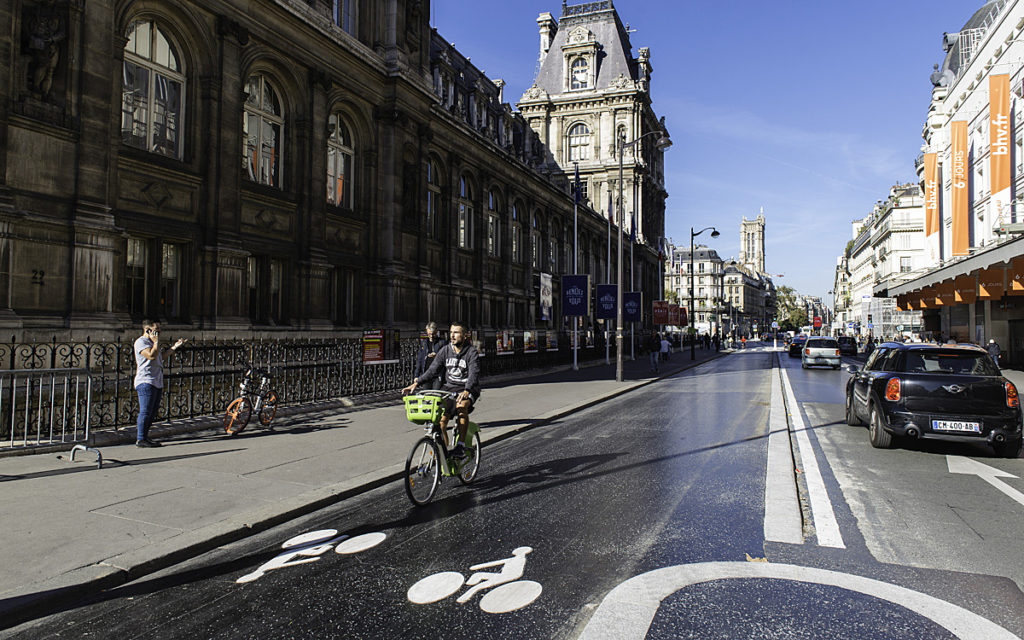 Paris is also aiming to create cycle routes along the paths of its three busiest Metro lines, she said.

The aim was to prevent the city being “swamped by cars, synonymous with pollution”, she was quoted by Le Monde newspaper as saying.’

As Polis reports, ‘the city is experimenting with providing emergency bikeways to help people get around safely….providing car-free access across the city for citizens. More recently the government is considering making these bike lanes permanent, which could have big implications for urban mobility after COVID-19.’

The following picture shows one of the new Bogota cycle lanes in action. 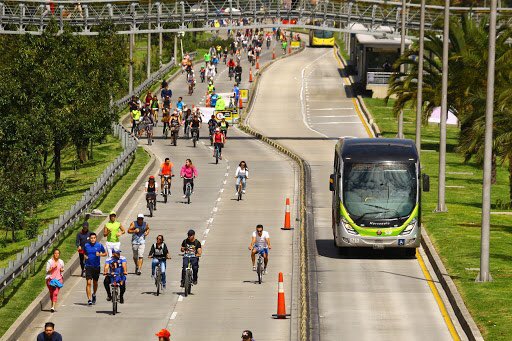 The article also details how a free e-bike scheme has been introduced for health workers.

There is a lot of talk at the minute about what the ‘new normal’ will be after the crisis – if we are looking for some good to come out of it then surely more protected bike lanes, less motor traffic and more bikes and e-bikes must be part of that new normal.

And if all other efforts fail perhaps an electric version of Colin Furze’s social distancing bike will catch on….