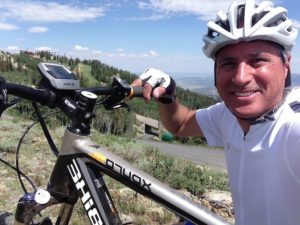 Recently I caught up with Larry Pizzi who is the president of Currie Technologies (IZIP, EZIP, Haibike, eFlow).

Larry has been in the bicycle industry most of his life and is in charge of one of the largest e-bike companies in the US.

In this interview you will learn more about his experiences in the industry, what the latest is at Currie Tech (new IZIP’s, Haibikes, eFlow, etc.), the IZIP Road Show, and what’s on the horizon for Currie Tech.

Pete: Larry, you have been in the bicycle and e-bike industry a long time.  Could you give us a brief history of your experience.

Larry: Yes, I joined Currie Tech in May of 2002 after being in the bicycle industry since I was a 14 year old, spinning wrenches at a local bike shop in Elkins Park, PA to support my passion for riding and racing bicycles and for buying new parts to continually upgrade my bikes.

One of the other shops I worked for had failed and an opportunity presented to open my own store with a partner. Bike Tech of Philadelphia was born in 1979 and I built it into a successful, three-store chain, selling it to a competitor in 1992.

I then went to work as an outside sales representative for a bicycle, parts and accessory distribution company. There was a lot of consolidation in the bike industry during the 1990’s and my career accelerated pretty quickly.

Over a ten-year period, I held various management roles with Raleigh, Mongoose, Schwinn and GT, moving my family three times, from the east coast to the west, ultimately landing in Southern California, in 1999.

When I joined Currie, the company was struggling to get traction in the market. Dr. Malcolm Currie was really ahead of his time with the concept, because the product was simply too primitive in many ways and it was not possible to build a price-point eBike that could be successful in bike shops, so they looked for alternate channels that could sell the products they produced.

After a few years as VP of Sales and Marketing, Dr. Currie retired and I took over as the President in 2005, and began focusing on product development and strategic partnerships with vendors that were producing components for the more developed market in Western Europe.

Our dealer business began to slowly grow on better quality, higher-end eBikes and in January of 2012, we were acquired by Accell Group, a Dutch holding company, that owns many bicycle brands in Europe.

Accell is also responsible for getting the eBike category off the ground and taking it mainstream, with their Sparta brand in 2004, and became very successful with eBikes in all of the most important markets throughout Europe, so it seemed like a perfect fit for Currie Tech.

Pete: A lot has been happening at Currie Tech!  Can you tell us about the new IZIP bikes and their recent redesign?

Larry: With the added resources and support of our new parent company, Accell Group, I was able to further enhance our in-house team, focusing on improved platform designs, mechanical and electrical engineering improvements and new product development.

We were also able to leverage Accell’s supply chain relationships. In the fall of 2013, we introduced to the trade, our first round of new IZIP products that reflect all the work we have done with these added resources. My team and I are extremely proud of what we’ve accomplished in the short term and continue to work to further the state-of-the art in the IZIP products we produce for the North American market.

Pete: The new Haibikes with the Bosch mid drive system are making quite a splash.  How has the response been to these high-end electric bikes and when can we expect to see Haibikes in shops in the US?

Larry: The response has been fantastic! Everyone that rides a Haibike loves the handling and responsive ride-feel. Deliveries of the US optimized Bosch Gen2 drive system were delayed however, the first shipments of Haibike Xduro eBikes will arrive the first week of June in the US and in stores a week or two following.

Pete: The eFlow E3 Nitro electric bike with it’s integrated battery in the seatpost was a hit last year and it proved its toughness in the Iceland Challenge.  Could you tell us about the new eFlow line for 2014?

Larry: Upgrades to the E3 Nitro include a larger capacity battery pack (from 11Ah to 14.5Ah), the option of a high-torque, or a high-speed motor, that enables the rider to choose the system that best suits their personal needs.

We also introduced a less expensive version called the Flight, with the same battery pack as the original Nitro, with a 1 x10 drive train, rigid fork and cable actuated disc’s.

An awesome bike at $500 less then the original Nitro and still is available with either high-torque or high-speed motor options.

Pete: Currie Tech had a big presence at the Sea Otter Classic, a traditional bike event.  What was the response like from the “traditional” bike crowd?

Larry: It was really interesting to see that cycling’s enthusiast core is slowly changing their attitudes perception of eBikes, as the newest breed of ePerformance bikes hit the market. At Sea Otter, we talked to a lot of people that are beginning to age-out of sport cycling but want to stay active and get exercise.

Also families and couples that want to ride together but have had difficulty doing so because of varying levels of ability. These bikes change all that and as a result, were very well received. Of course, there are still some purists that don’t get it but when I ask if they have every ridden an eBike, they generally say that they haven’t. Getting them on one, typically changes their opinion, even if its not right for them.

Pete: Currie Tech has the slogan of “Getting more people on bikes!”  Could you tell us how Currie Tech is accomplishing that?

Larry: It has always been one of my personal goals in life to get more people cycling and now, with the technology of eBikes finally being ready for prime-time, we are overcoming objections that North Americans have to riding a bike by leveling hills and making longer distance ride more achievable.

The smart bicycling advocates and bicycling advocacy groups, such as The League of American Bicyclists and People for Bikes, have supported eBikes for this very reason – overcoming objections, and they have done a fantastic job of getting our fair share of the transportation budget to build better bicycling infrastructure in the US, making it safer for people to ride, which has been one of the biggest objections to overcome.

Pete: Could you tell us about the IZIP Road Show; what is it and how is it going?

Larry: It all started about four years ago when our then, Director of Dealer sales, started seeing real value in taking our full selection of products out in the field during the fall and winter (low season) at retail. He realized that most customers and their employees had never actually ridden our products and was amazed by how the experience changed their thinking.

In July of 2012, we hired five new territory managers, bought them each a brand new, fully equipped high-top van, wrapped them to look like rolling IZIP billboards and put them into key markets around the country. They still call on dealers during the low-season, but most importantly, they put on demo events, partnered with our dealers so that people around the country have an opportunity to test ride our bikes.

eBikes are so experiential, meaning that we can talk about them for hours, but one good test ride, speaks volumes. We find our demo process to be one of the best ways for consumers to become exposed to eBikes, and when they are in this manner, it very frequently leads to sales. Once our dealers see how effective this is, they start putting on their own demo events in their communities, using the branded assets that we provide for them.

Pete: Currie Tech recently became a member of the Accell Group.  What does that mean and how has it affected Currie Tech? (Electric Bicycle Competence Center, etc.)

Larry: As I mention earlier in the interview, being part of Accell has many advantages form a resource perspective, which has helped us advance our goals and objectives much more rapidly then we would have on our own. The other component is that we are part of a unified team in North America, partnering with our sister companies, Raleigh America, Raleigh Canada and SBS (Seattle Bike Supply).

Because eBikes have a core competency that is very different when compared to normal bikes, Currie has recently announced that we have formed a division within our company called EBCC-NA. The Electric Bicycle Competence Center of North America will serve all of the engineering, development, service and support needs for all of the Accell North America companies, on all brands of eBikes, as we bring them to market in the near future.

Pete: Since you have been in the e-bike industry a long time, what is your favorite customer success story (someone putting an e-bike to good use.)?

Larry: There are so many customer success stories so it’s a bit hard to choose. We have lots of customers that have replaced cars for commutes, are now riding when they could not ride previously due to some physical issue, and those that a simply riding ten times as much as they were riding previously.

An eBike made it possible for her to begin her journey that started on a Pedego cruiser that got her exposed. She then graduated to an eFlow Nitro and began commuting to work and the gym, a 30 mile round trip every day. After loosing over 200 lbs., she told me last fall that one of her goals was to compete in a triathlon, asking if I could assist with getting her a road bike.

Here is a link to her FB page, Living instead of Existing, with a post after completing her first sprint triathlon earlier this spring.

Pete: What exciting tech advancements can we look forward to in the future of e-bikes?

Larry: Continued improvements in battery capacity, drive systems and sensor enhancements along with new connected devices and communications technologies. These will continue to enhance the user and dealer experience, making eBikes more enjoyable to use, sell and service.

Pete: Do you have any other news from Currie Tech that you would like to share with us?

Larry: Keep your eyes open for more new and improved, complementary models for 2015. Many more advanced products are on the horizon!

End of interview with Larry Pizzi.

Thanks to Larry for taking the time for this interview!