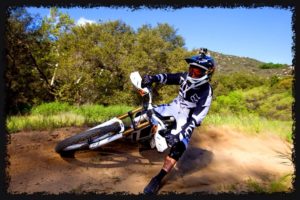 Ronnie Renner knows how to handle a bike with a lot of power!  He is a world record setting freestyle motocross rider for Red Bull.

And as a break from the ” daily grind” of riding his moto, he jumps on his Stealth Bomber electric mountain bike.

Actually the Stealth electric bikes are more like lightweight electric off road motorcycles.  Most of their bikes have a bicycle drivetrain so you can pedal a bit if you feel like it (their Hurricane model just has foot pegs).

Stealth electric bikes are known for fast speeds (50 mph), big range (50 miles), lots of power (4,500 watts), big batteries (1,500 watt hours), big front and rear suspension (8″), and aggressive off road tires.  I rode one briefly in Germany and it was so powerful that you really had to hold on when hitting the throttle!

With all those specs, it’s no wonder that Ronnie Renner uses this e-bike as his way to change things up from the normal moto.

Enjoy this video with Ronnie Renner getting his Stealth out on the trail.

And here is more more riding footage of Ronnie with his Stealth!

And here is video to show you what Ronnie does for his day job; pretty crazy stuff!