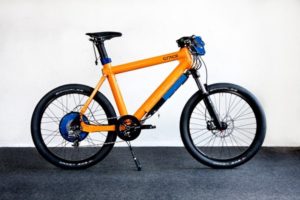 Hello E-Bikers! Here are some of the highlights in the e-bike news: New York City struggling to classify e-bikes, renting an electric bike on your next vacation, the new Grace One electric motorbike, the “Swing Trike”, e-bikes in rural England, and ebike news from Best Buy.

It seems that the state of New York is looking at a law that would classify any electric bike capable of a speed of no more than 20 miles per hour as a regular bicycle. Currently, electric bikes are sort of “unclassified”, though they are technically illegal on the streets of New York City. There’s word, however, that another bill is making its way through that would classify the electric bike as a car.  It has already been passed through the community board on the Upper East Side and passed on to legislators.  Stay tuned for more developments on this one.

Frommer’s reports that electric biking for vacationers are poised to surge. A report in the Toronto Star written by Pauline Frommer of the Frommer’s Travel Guides fame reports that many tour and rental companies are adding electric bikes to their rental fleet for this summer. Their prediction is that more people will be interested in renting electric bikes because even those who are not fit enough to enjoy regular bike riding will enjoy getting around their vacation spot on an electric bike.  If you are vacationing in Sedona Arizona soon you should check out Sedona Electric Bike Rentals.

Engadget reports that Grace Bikes has announced the arrival of the Grace 1 Bike. This is one of the highest end and highest tech electric bikes on the market. It’s pricey, at around $6000, but it offers integrated Li-ion batteries that charge in about an hour. The bike has a top speed of 30 miles per hour and a range of up to 31 miles.

Germany is offering a new electric, well, trike. The Swing Trike is an electric bike on three wheels, specially designed for the balance challenged! It has a front wheel three speed motor, but can be upgraded to an 8 speed motor. Check it out on Reuters.

The newest initiative by the Campaign to Protect Rural England has found 20 residents from Hampshire Village who have agreed to trade in their cars for electric bicycles and record their adventures for a period of three months. The bikes being used by the residents have a range of 50 miles. In addition, the village has purchased several regular bikes for residents’ use. The idea behind the campaign is to promote sustainable environmentally friendly transportation. You can read more about it at BBC.

Best Buy, one of the US most popular electronic retailers, seems to be rethinking their strategy when it comes to electric bicycles, according to a report by CBS Business. They had moved into the forefront of the market space, but are finding that, even with the high prices of gas, their electric vehicles aren’t moving. Their product line includes scooters, electric bicycles and motorcycles. They had even been selling the Segway scooter. It seems that the electric biking excitement seen in Asia recently is a little slower in moving to the US. Many consumers continue to be put off by some of the low ranges of batteries. Many Americans want electric vehicles for commuting to and from work, and some Americans have a longer commute than allowed with some electric bicycles and scooters.