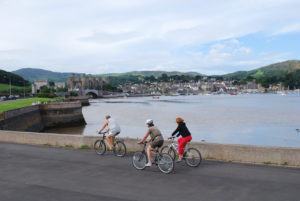 Covering the delights of these relatively small areas of the UK that punch above their weight in terms of marvellous cycling country.

In biking terms both Wales and the Peak District National Park are perhaps most associated with superb mountain biking opportunities and areas such as Wales’ Snowdonia and Brecon Beacons have done much in recent years to promote themselves as offering some of the finest cycling opportunities in the UK.

But outside of the well-known tourist hotspots there are some fantastic trails and areas to explore, including hugely scenic Cheshire and Wales outside of its National Parks, full of fine beaches and ancient castles.

This guide to eBike hire will help with planning an eBike holiday and it is also a good way to test a few eBikes before purchasing your own.

Many companies detailed here are also retailers and do good deals to those who have hired e-bikes from them.

Enjoy this eBiking guide and hopefully it will give you some ideas on new places to ride!

After a long string of beaches the North Wales coast takes a dramatic turn where it meets the dramatic Conwy Castle (part of a World Heritage Site and bang on a Sustrans cycle route to boot) and the magnificent geographical feature of the nearby Great Orme at Llandudno.

Inland lies the Snowdonia National Park, based around the tallest mountain in the whole of England and Wales and certainly one of the most spectacular.

High-quality Kalkhoff Agattu step-thru comfort models. From £20 per half-day to £200 per week.

If you want a little-explored but highly scenic area for e-biking the countryside to the west of Mold is ideal for exploring due to its network of quiet lanes and tracks.

It includes the Clwyidian range of hills and the Clwyd Valley with attractive towns such as Ruthin, Denbigh, St Asaph and beautifully sited Rhuddlan castle. 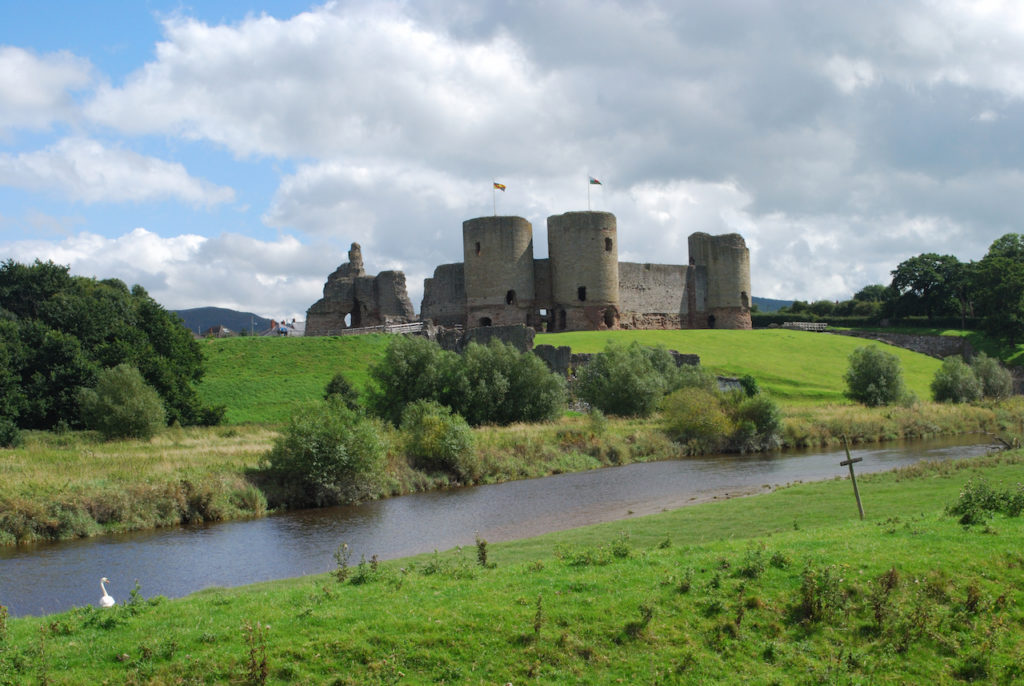 There’s also the chance to stay at the same place as hires out the e-bikes. 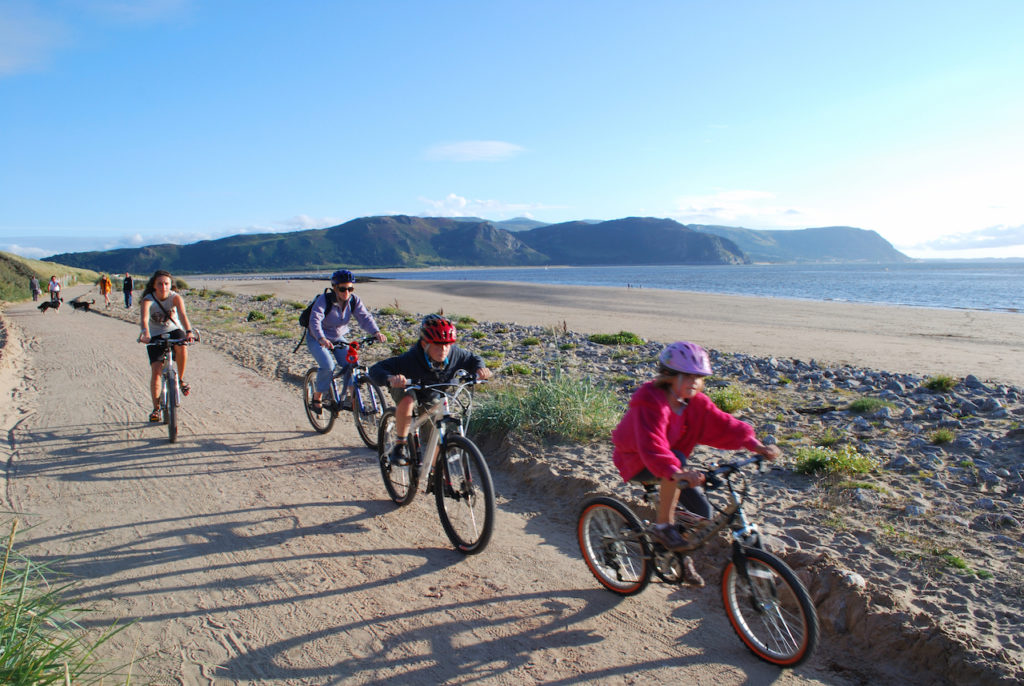 Based inside Sunnyvale Holiday Park at Kimnel Bay but offering a mobile service operating along the North Wales Coast with pickup and dropoff points at Prestatyn, Abergele, Towyn, Rhos-on-Sea and Llandudno.

Sustrans National Cycle Network route 5 runs along the north coast of Wales and is largely traffic-free. 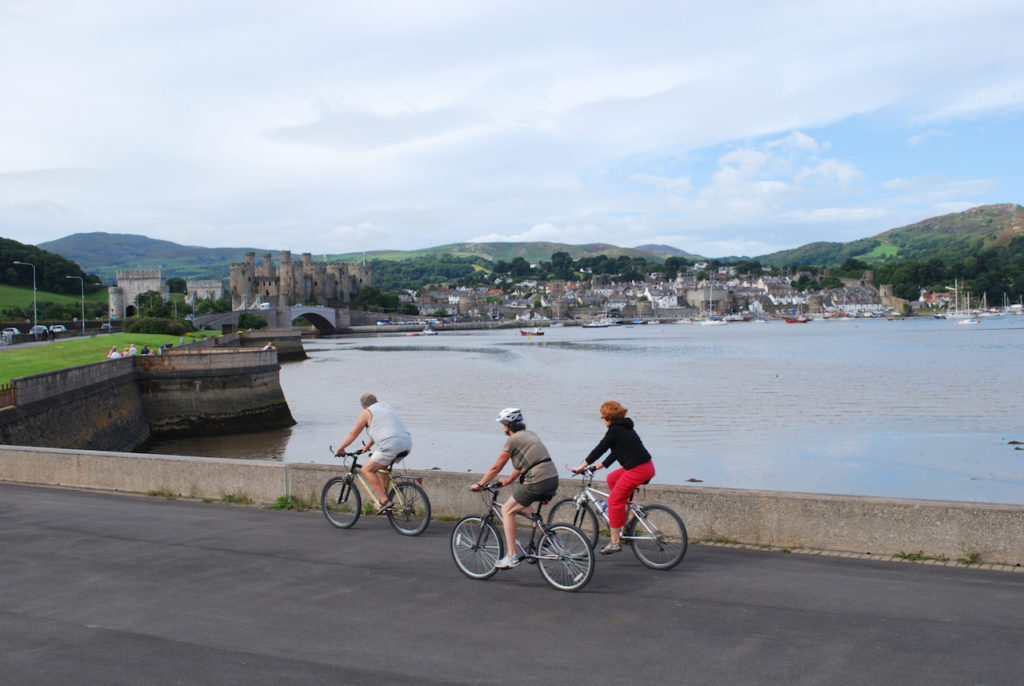 This area around the Conwy estuary is simply magnificent for riding and includes a ride around the Great Orme headland. 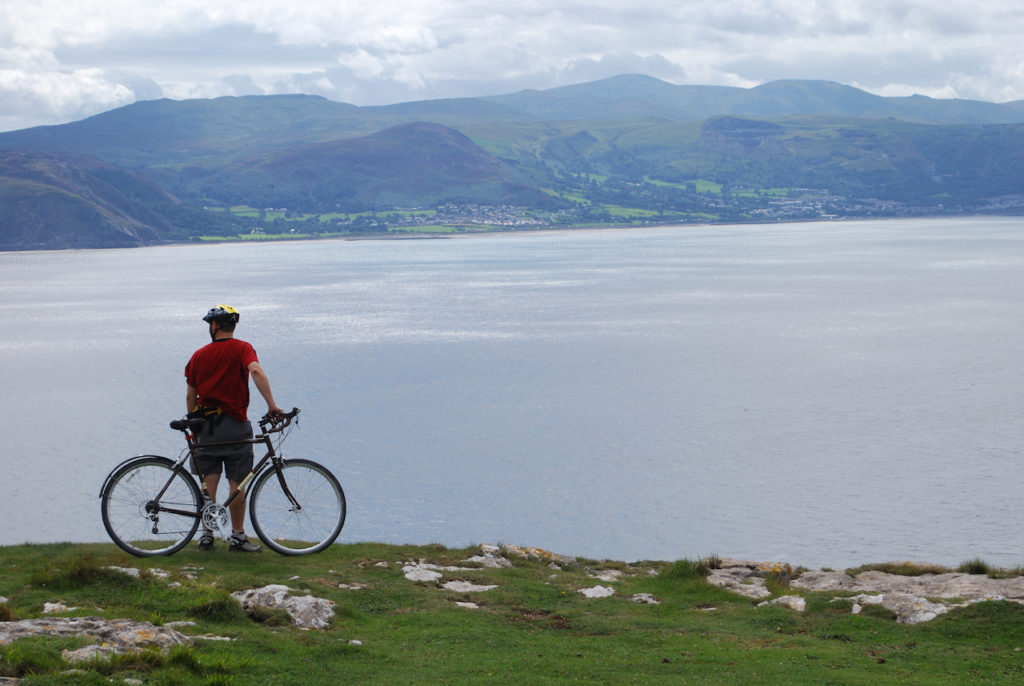 Beics Brenin is located in the Coed y Brenin Forest Park which has a plethora of waymarked mtb trails for all ability (graded blue, red and black).

Dolgellau itself is at the centre of the South Snowdonia greenway, a 27 mile largely traffic-free route through spectacular hill country.

If you want the ultimate e-mtb challenge you could tackle the monster that is Snowdon (though note there is a voluntary emtb ban on riding there in the summer months as it is so popular..). 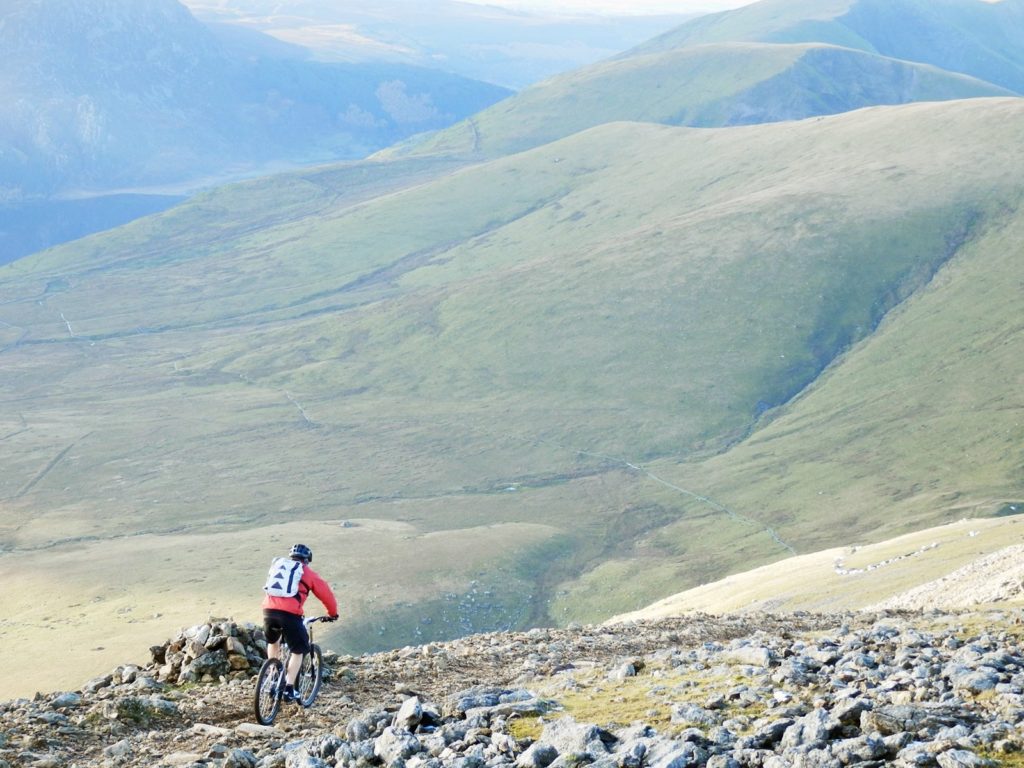 Here’s a video to give you a taste of what to expect and your options: 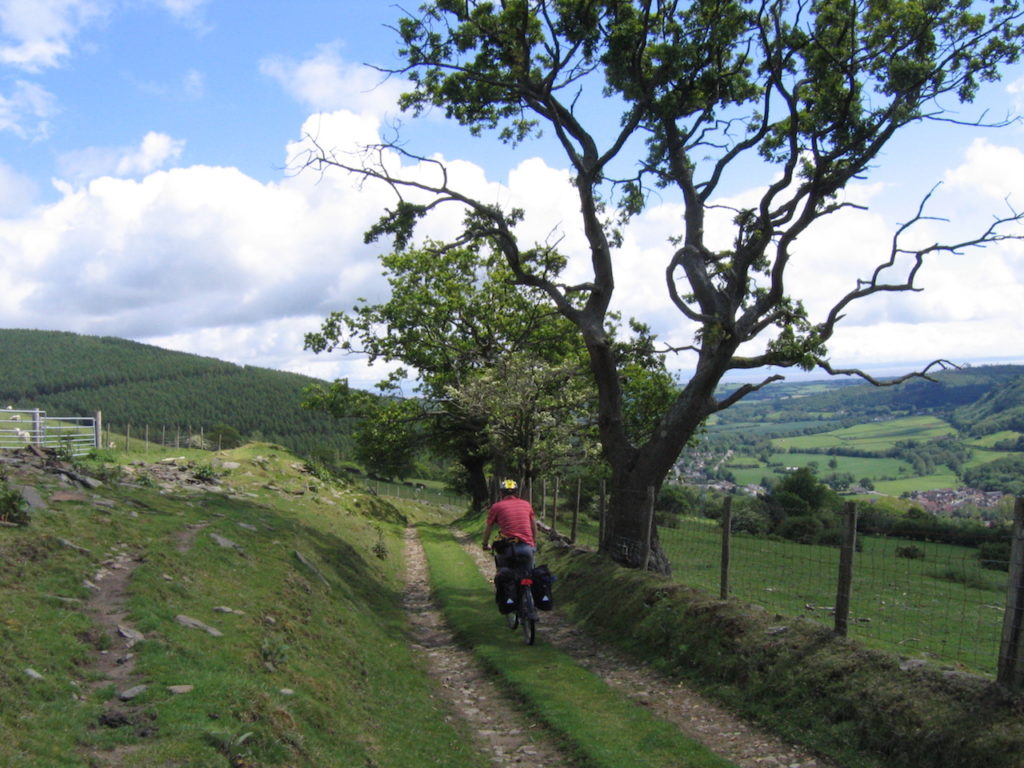 Wales capital city of Cardiff is also handily placed on the Taff Trail which gives access to the Brecon Beacons National Park which includes the Black Mountains.

The shape of the Beacons is totally arresting, huge curving ridges on one side and gentler slopes on the other, with plenty of bridleways to let you explore them by e-bike.

Haibike e-mtbs and leisure models from Raleigh and Freego

Hay-on-Wye is right on the Welsh-English border and gives great access to the Black Mountains (containing Wales highest tarmac road, Gospel Pass) and there are some stunning ridge rides just one of which is filmed here:

Here’s a nice overview of the gentler cycling available in next door Herefordshire.

Another opportunity to hire an e-bike right in the heart of a trail centre and one voted the best in the UK over the last couple of years.

There’s a great network of trails at the bike park but it’s also on the doorstep of the Brecon Beacons National Park which lies just to the north and offers numerous mountain biking opportunities. 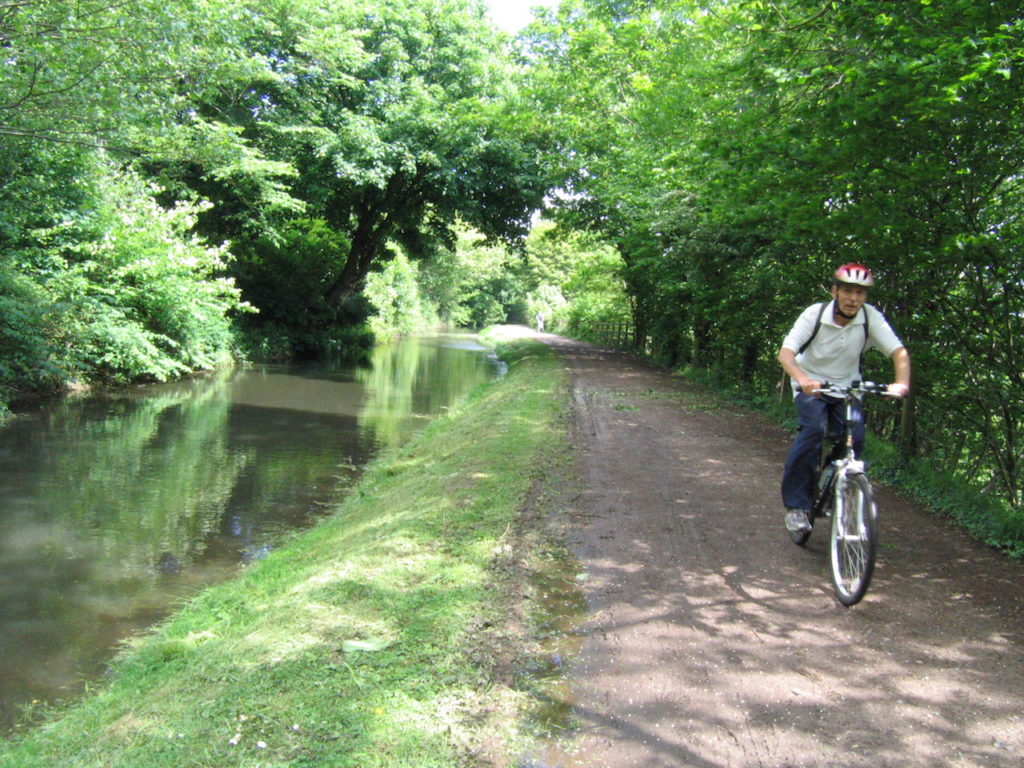 For an easy leisure ride you could try the lovely Monmouthshire and Brecon canal towpath that heads south-east of attractive Brecon.

Here’s a video to give you a taster of the type of riding available:

Pedal Power is a cycling charity that has a range of electric bikes for hire, including some suitable for disabled riders. 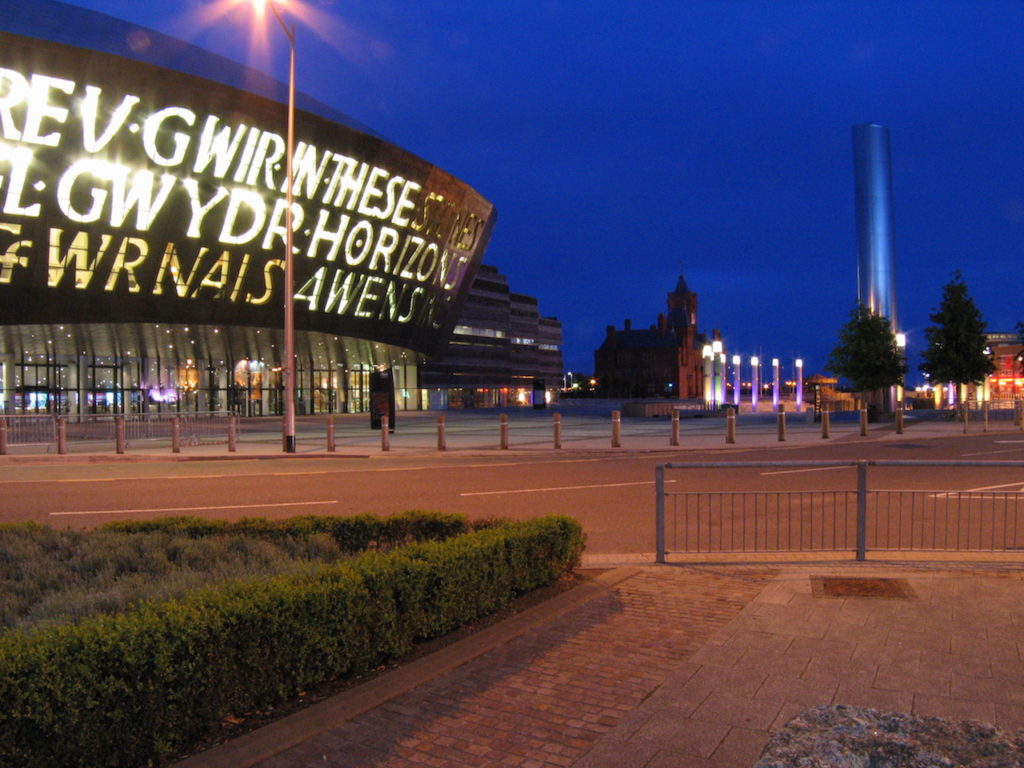 There is a fine, largely traffic-free ride around the picturesque Cardiff Bay, and the Taff Trail leads north out of the city to the Victorian fantasy building of Castel Coch. 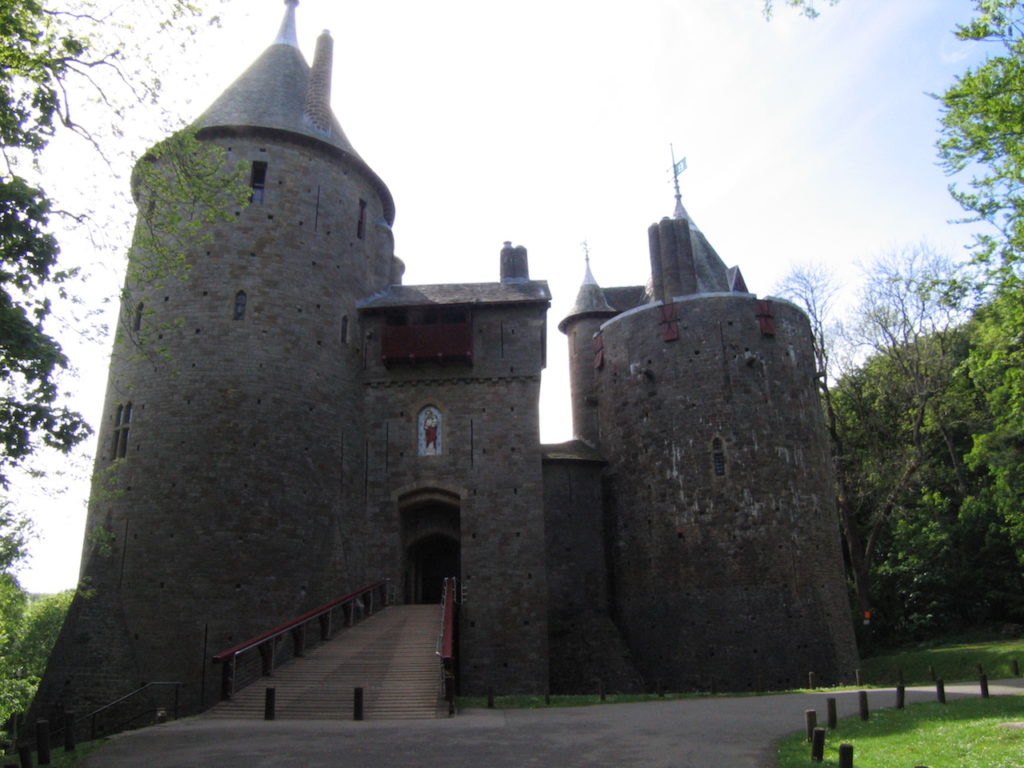 The Marcher counties are largely rural, very picturesque but without the extreme terrain of the mountains of central Wales or the English Peak district and so a fine escape for some peaceful and relaxing e-biking. 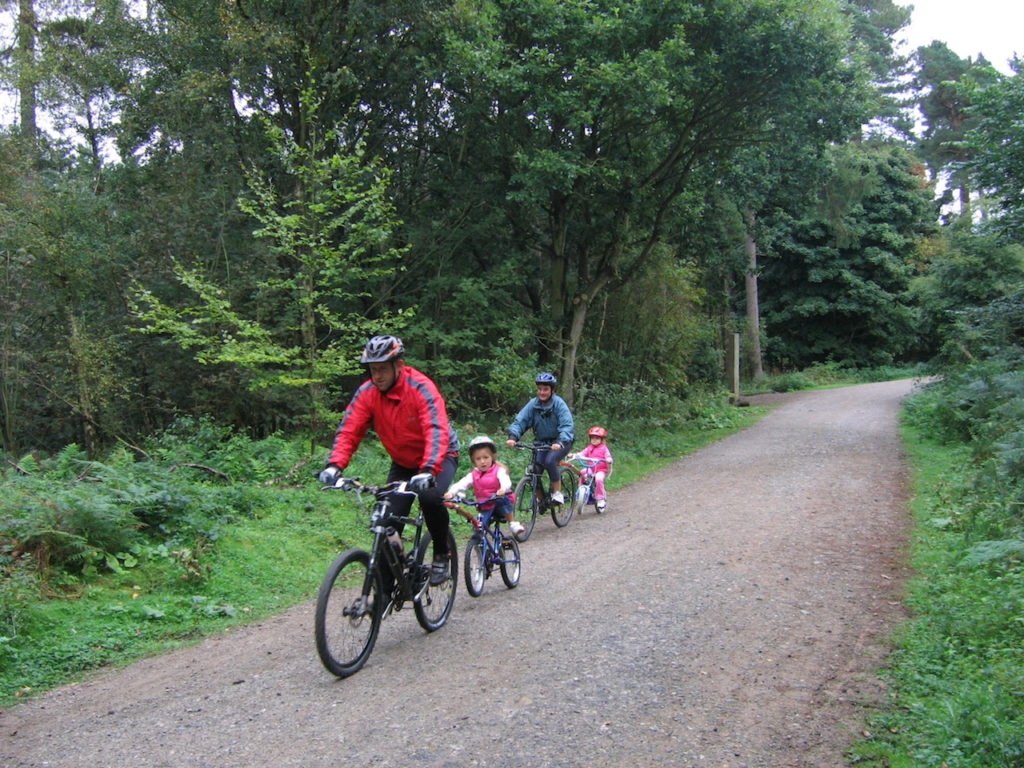 Cheshire offers a great variety of riding from nearby off-roading in Delamere Forest to the largely minor signed road route of the Cheshire Cycleway that heads into the beautiful and historic county town of Cheshire. 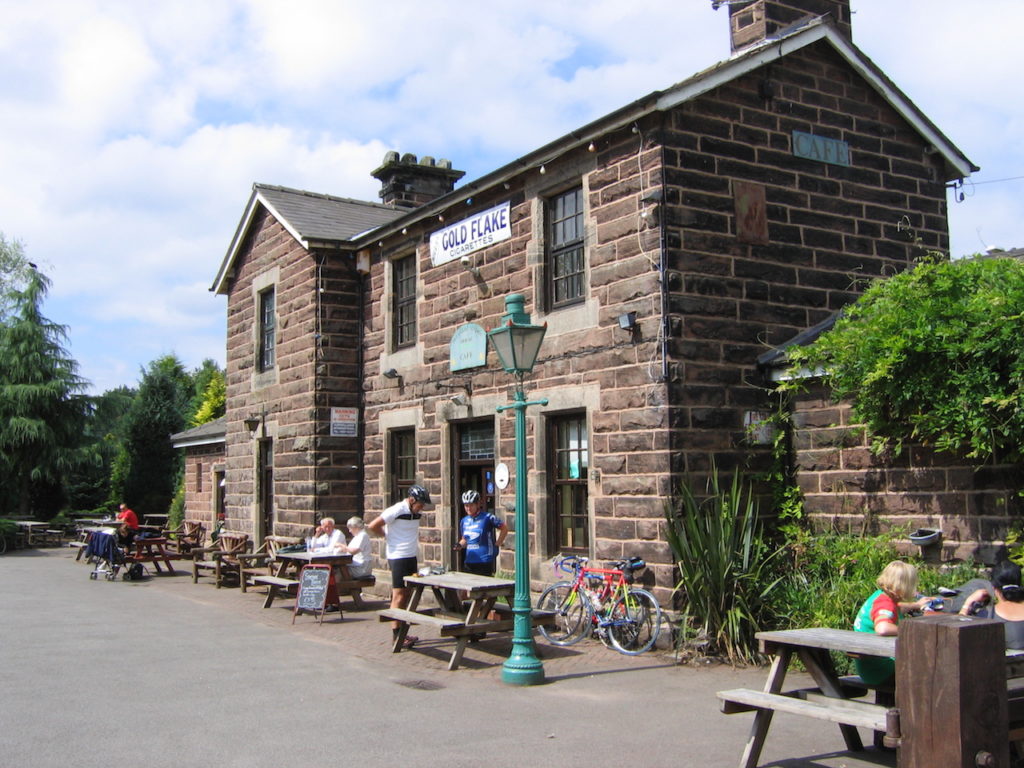 The Peak District National Park has some of the best and most contrasting riding in the country. In the north the Dark Peak is made up of gritstone ridges and peat bogs and in the south the White Peak features steep limestone valleys. 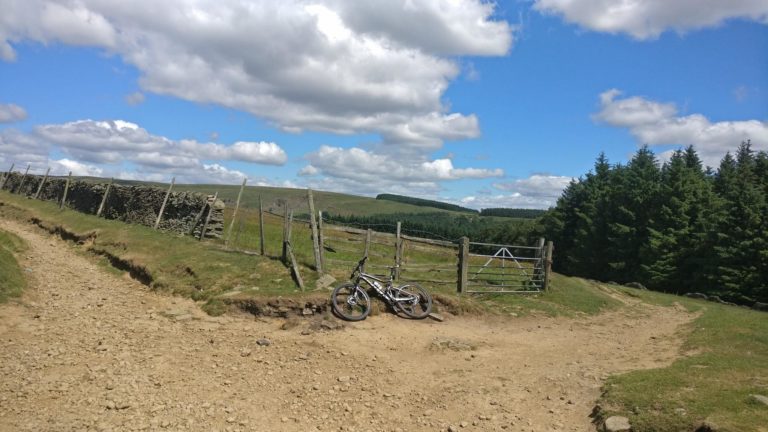 Superb mountain biking country on the edge of Dark Peak and White Peak country with splendidly steep and green hillscapes and the riding just about as difficult as you want to make it, including the famed climbs of Mam Tor and Rushup Edge. 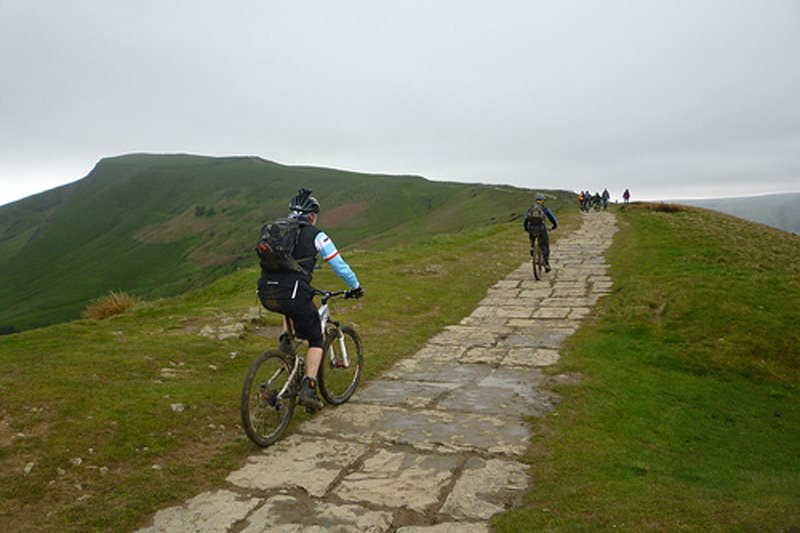 There are easy off-road leisure rides too on tracks around the nearby reservoirs in the Derwent Valley.

Here’s one route recommended by the Bike Garage, the aptly-named Beast of Hope Cross (the beast being a particularly rocky descent).

There are Raleigh hybrid models available at the station bike hire from £17 for two hours whilst upstairs Peak Ebikes retailers have emtb demo bikes that can be booked for £50 per day (redeemable against a purchase). 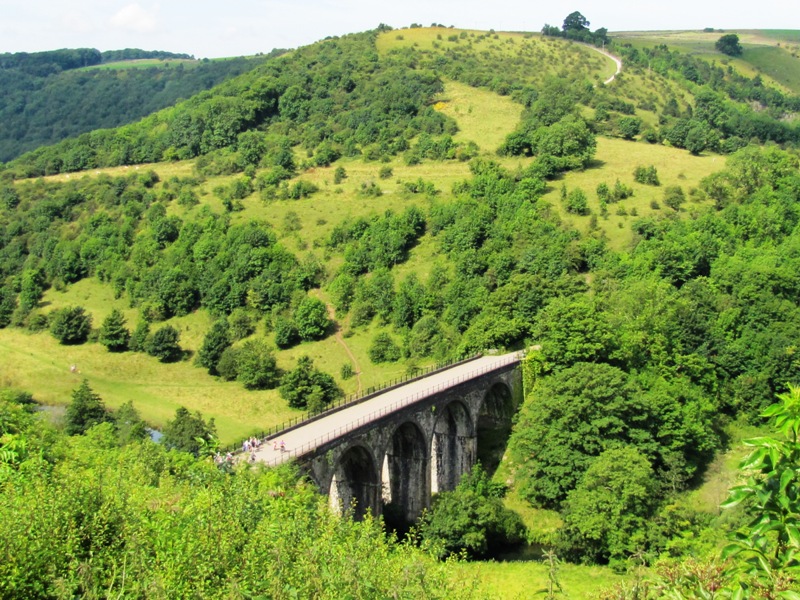 The Monsal Trail is yet another fine traffic-free ride on a former railway through wonderful White Peak scenery.

You can also make the short hop over to one of the UK’s premier stately homes, Chatsworth House.

The following video gives an idea what to expect along the Monsal Trail but there is also a great network of tougher mountain bike rides and minor roads in the area.

Raleigh hybrid models from around £30+ per day.

Both centres are ideal for exploring two of the UK’s most popular and scenic traffic-free trails, the Tissington Trail and the High Peak Trail.

Ashbourne is at the southern end of the Tissington Trail and to the south-east of the village is some fine country road riding with the lovely Kedleston Hall as your target.

The once-industrial cities of Sheffield and Nottingham might not seem obvious cycling destinations but both have growing urban cycle networks and give access to some fine countryside riding.

Further south the Midlands centred around Birmingham and Coventry, have several gems including Shakespeare’s birthplace of Stratford-upon-Avon.

To the east is the largely rural county of Lincolnshire with its cathedral-famed capital, Lincoln.

NCN route 6 lies to the north-east of Sheffield in the form of the Five Weirs Walk path and exits to the south-west, climbing gradually towards to Peak Disrict. You can head north-west along NCN627 for some nice forest trails at Wharncliffe Woods.

There is a nice ride out from Nottingham centre to Wollaton Hall and some great traffic-free riding alongside the river Trent and along the Erewash Valley Trail.

The best leisure riding in Derby is to be had alongside the River Derwent (follow it to the south-east to visit attractive Elvaston Country Par) and along bridleways to the north-west for a visit to Kedleston Hall.

Cannock Chase is an extensive and very pretty area of lowland heath interspersed with commercial forestry plantations and designated an Area of Outstanding Natural Beauty.

There are designated leisure, cross-country and downhill trails in the area. 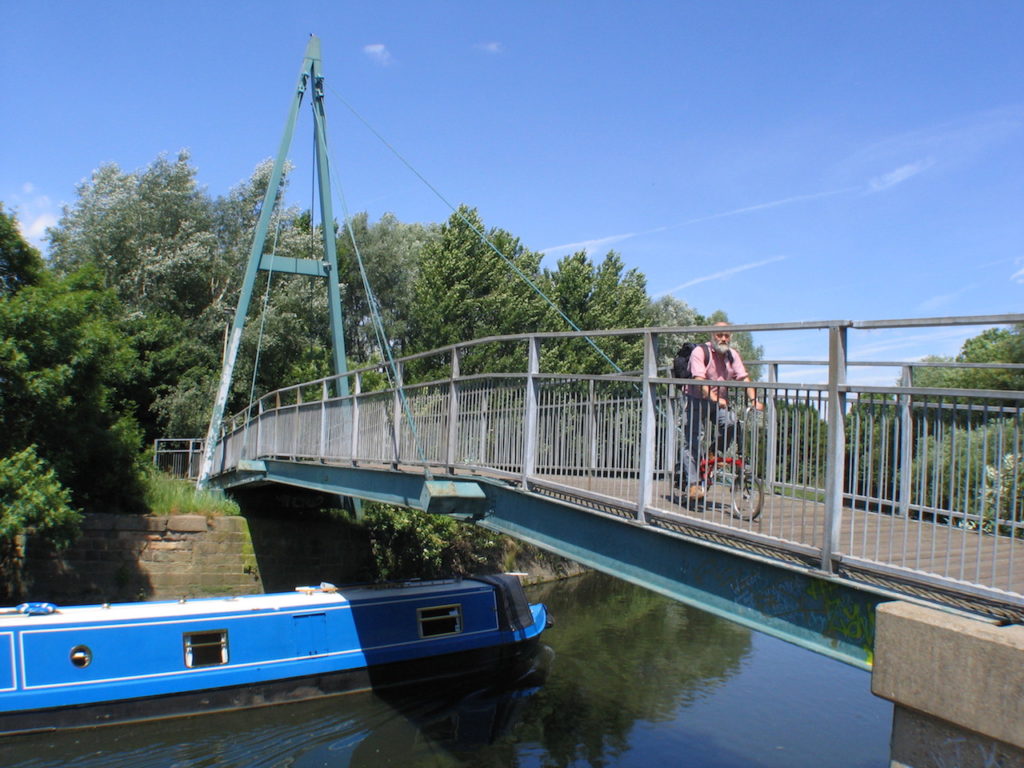 There is some lovely riverside riding to be had along the Grand Union Canal and River Soar which run through the centre of Leicester. 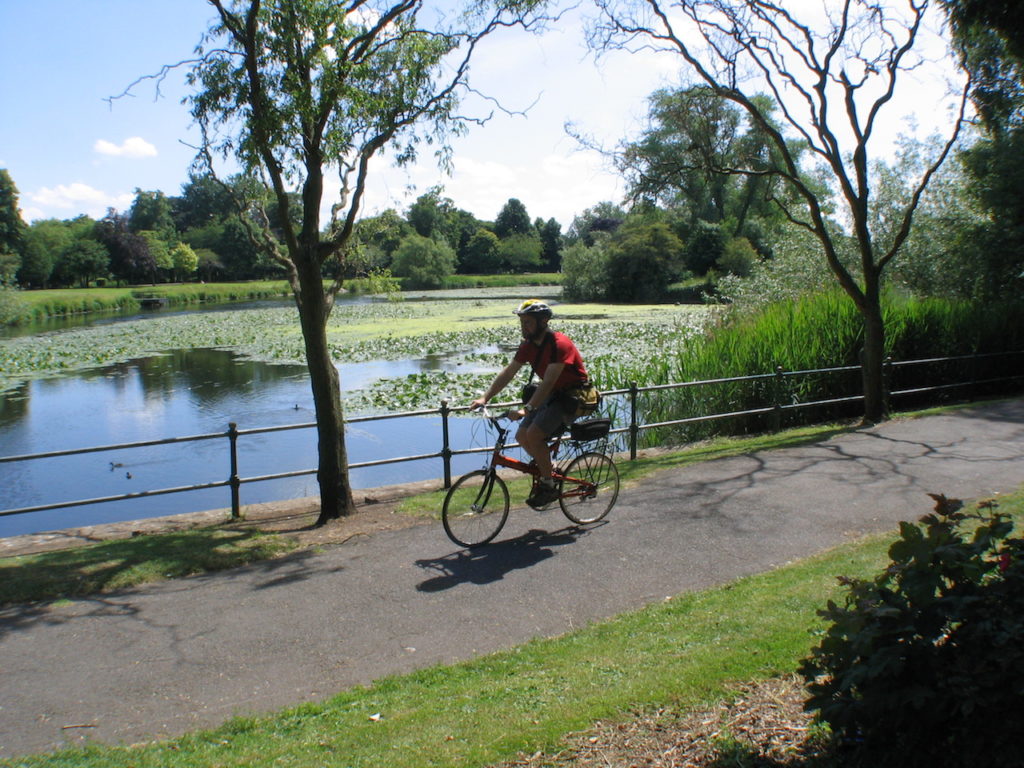 Leicester itself is home to some fine parks, churches and a cathedral.

Lincoln’s city bike-share scheme also includes some e-bikes which can be hired via the automated docking system and app for £3 per hour. 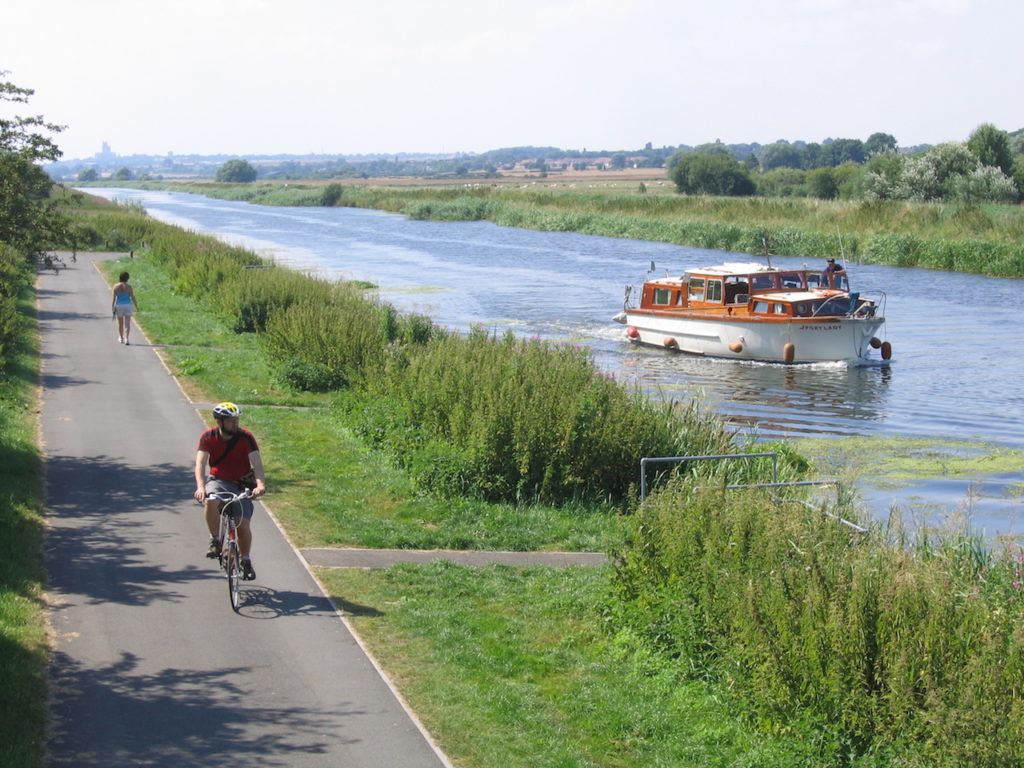 Lincoln has a stunning cathedral at its centre and there is some fine traffic-free riding along the Lincoln-Harby path, the Fossdyke Navigation and the impressive Water Rail Way.

Lots of graded off-road trails through Sherwood Pines Forest Park and there is a fine traffic-free ride to the north along NCN to the scenic Clumber Park where more trails await.