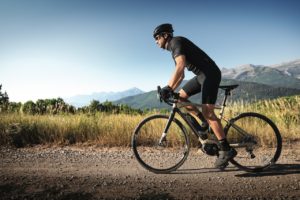 Yamaha USA has announced it will be delivering its all-new adventure gravel e-Bike, the Wabash, to bike retailers across the country this spring. 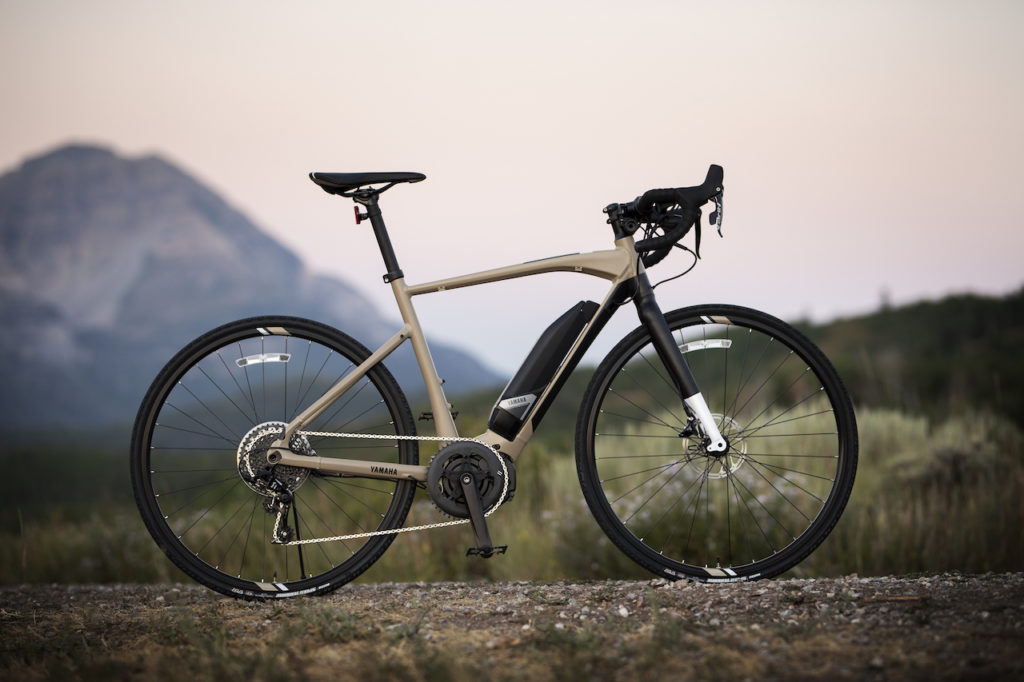 The Yamaha Wabash is a Class 1 e-bike (rider must pedal to get electric assist, 20mph assist limit), that, Yamaha say, ‘is made for exploration and cycling adventures with performance and versatility, that excels on both hard surfaces as well as off-road dirt and gravel surfaces.’ 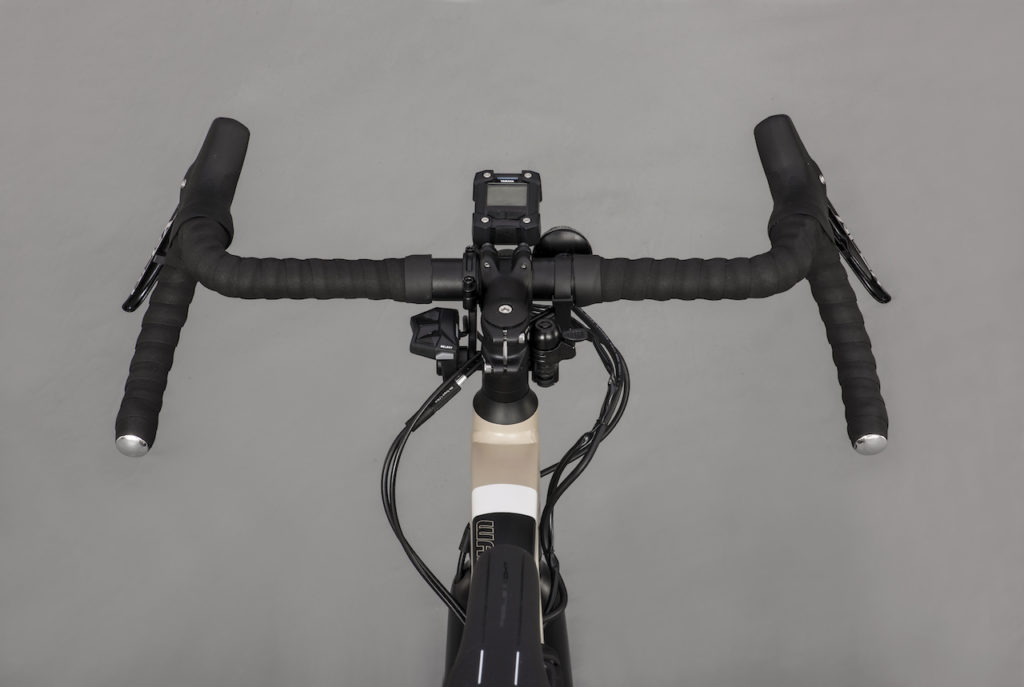 Above all else the Wabash is designed to be taken both on and off road bike. Design elements include: 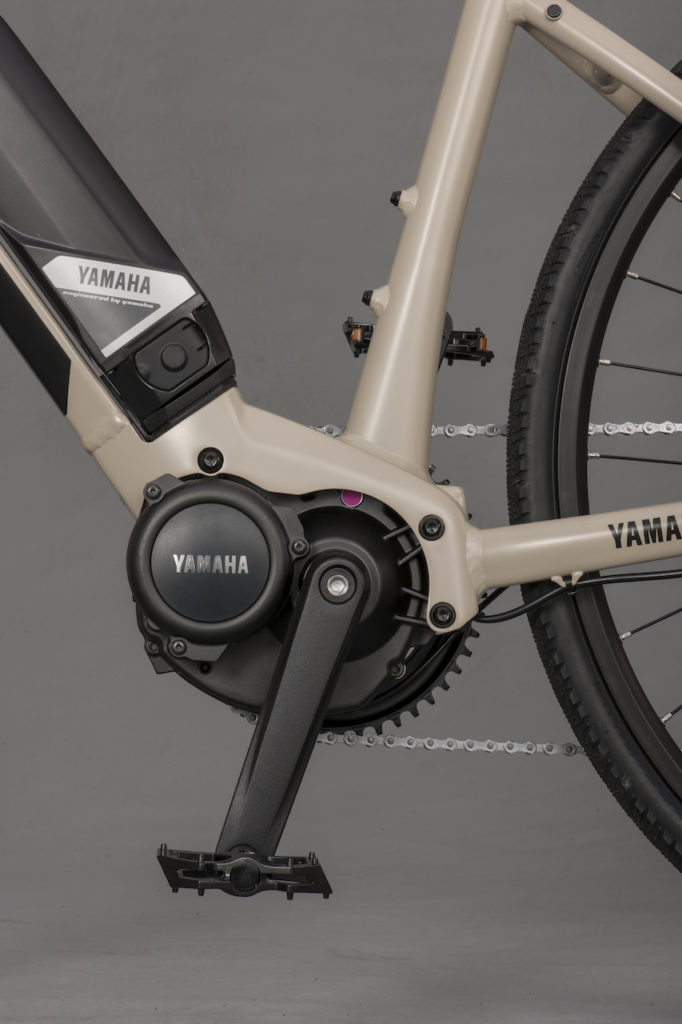 The Wabash is powered by Yamaha’s own PW Series SE drive, with cadence support up to 110 RPM and max power of 500 watts.

MSRP is $3,499 and it comes with an impressive 3-year warranty on the drive unit, 500-watt-hour battery, and frame. Reported weight is around 44 pounds or 20kg. 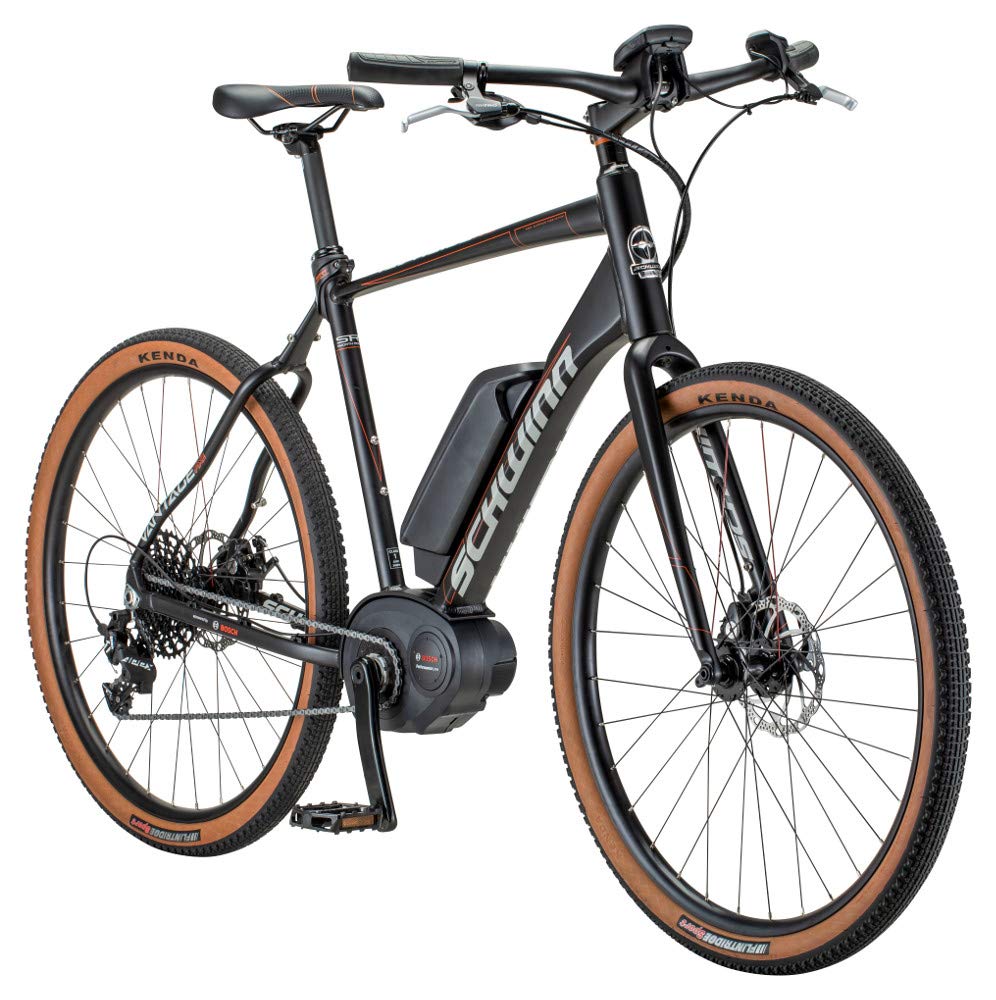 This Forbes report reveals that the new Schwinn Vantage FXe 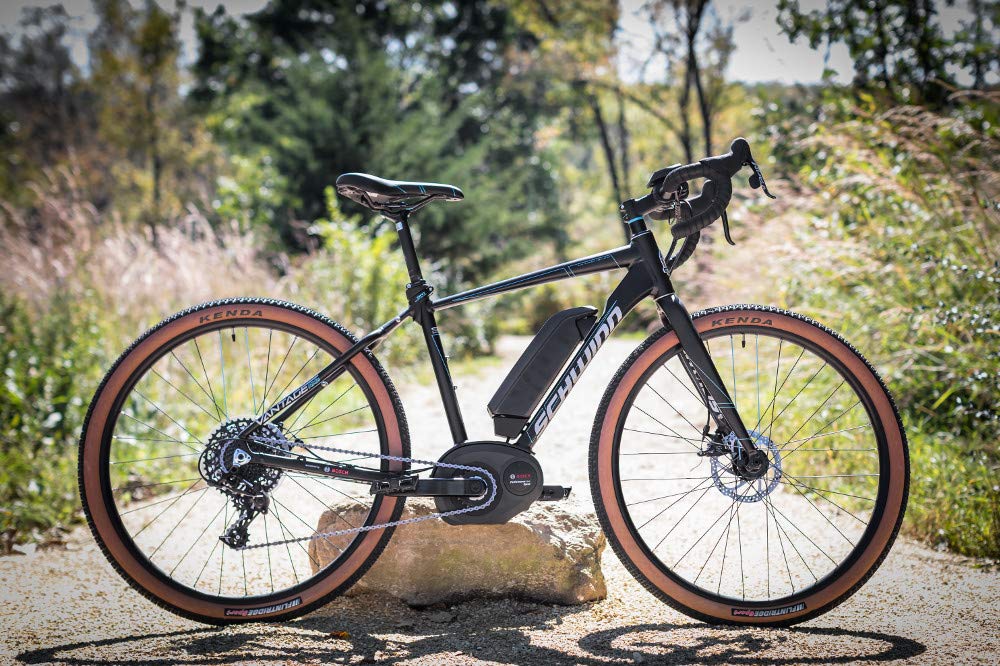 and Schwinn Vantage RXe electric assist models ‘will be Amazon exclusives, and won’t be available via the brand’s usual outlets such as Sports Authority, Dick’s Sporting Goods or Walmart. (Schwinn’s bike-store-only marque is called Signature.)’

Both models use Bosch mid-motors but whilst the Vantage FXe is a class 1, 20mph, 250 watt model the Vantage RXe uses the 350W Bosch Performance Line Speed drive with a top assisted speed of 28mph.

The Forbes article states ‘If sales hit targets the models will then become available on Amazon stores in Europe.’ 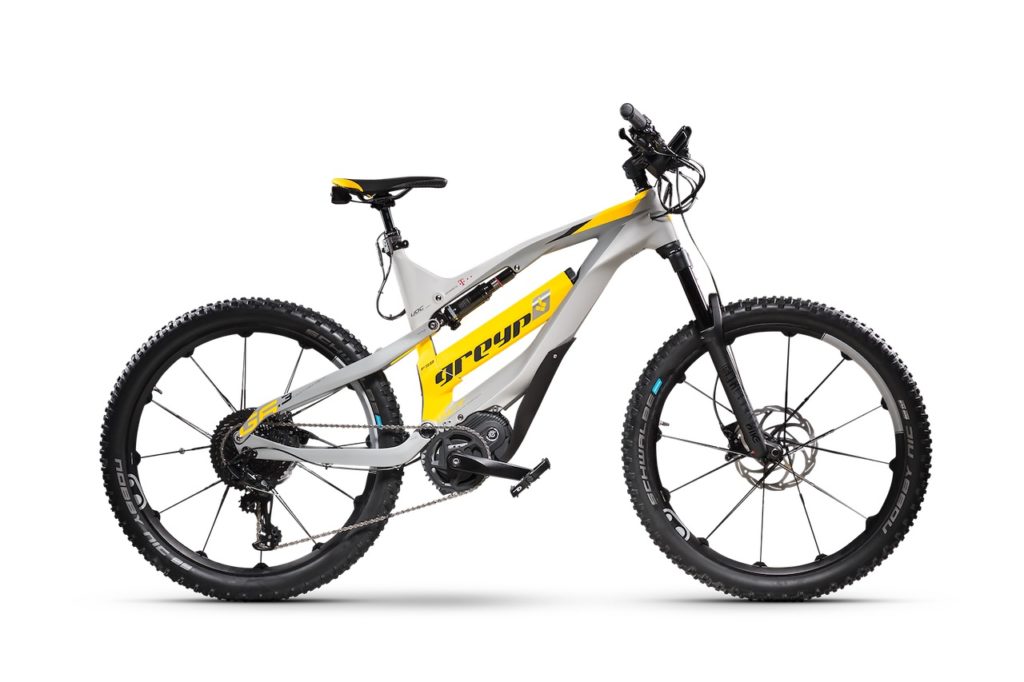 The likes of footballer Lionel Messi own one of their existing G12 models and EBR revealed teaser info about a new e-mtb model, the G6, earlier in the year.

The full spec is out now, with three models of G6 all featuring carbon frames and MPF mid drive motors.

All models feature a sizeable 700Wh battery pack. The bikes look to packed with tech, including integrated front and rear cameras plus accelerometer, gyro, GPS, barometer and internet connectivity.

This video gives much more detail, including possibilities for comparative fitness data and competing riders to indulge in ‘gamification’ with features such as livestreaming of rides. 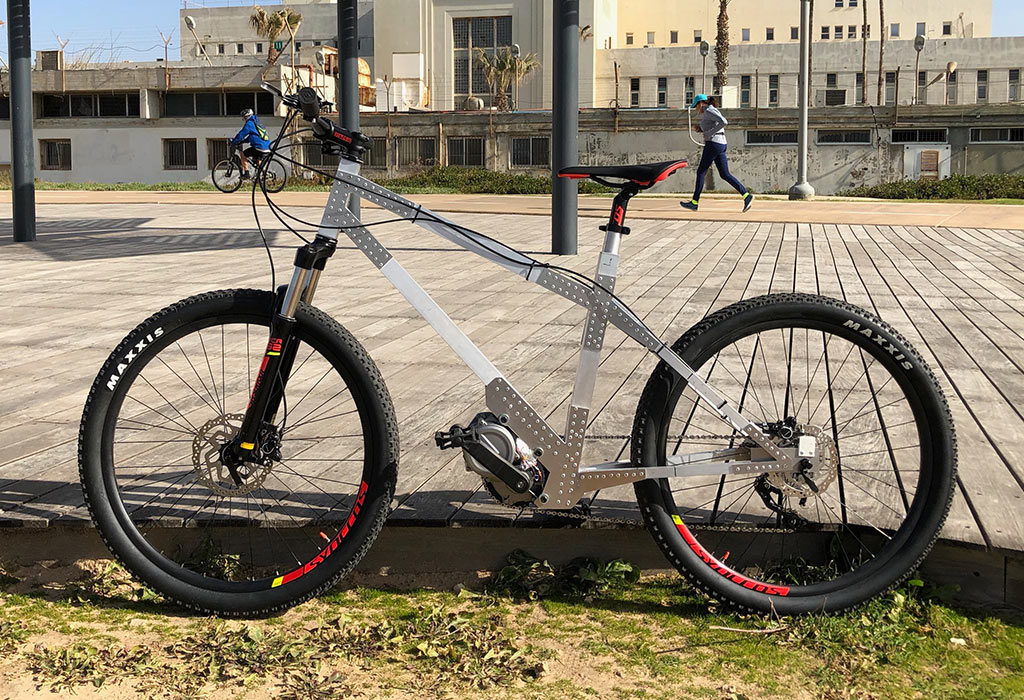 Finnish company Avial are developing two models of e-bike based around a patented frame weighing about 3.5 kg, made of durable aircraft-grade aluminium alloys. 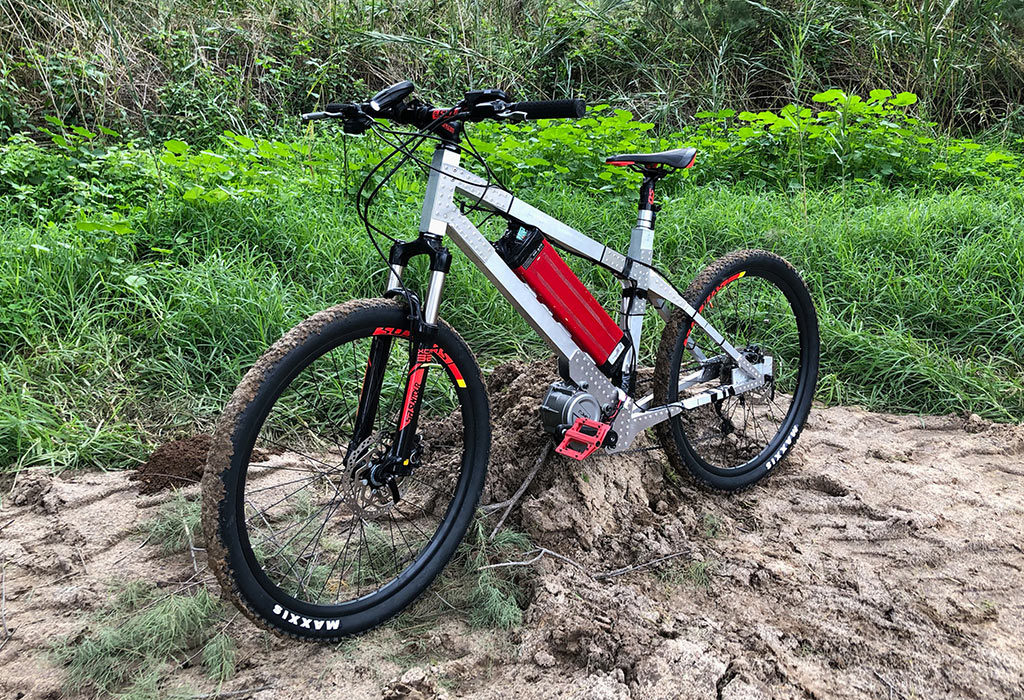 The frame is designed to accommodate both mid-drives (250W and 350W variants with 80Nm of torque, brand Comp C17) or a hub motor.

Avial say reasons for the novel approach to the frame construction include environmental friendliness, square section frame making for easier mounting of ‘add-ons’, ease of bespoke ‘one-off’ manufacturing and a desire to produce a cost-effective e-bike with the frame actually manufactured in Europe.

Avial say they are aiming for a mass-produced model with a retail price in the range of 1400 – 1800 euros with both city and trekking style options. 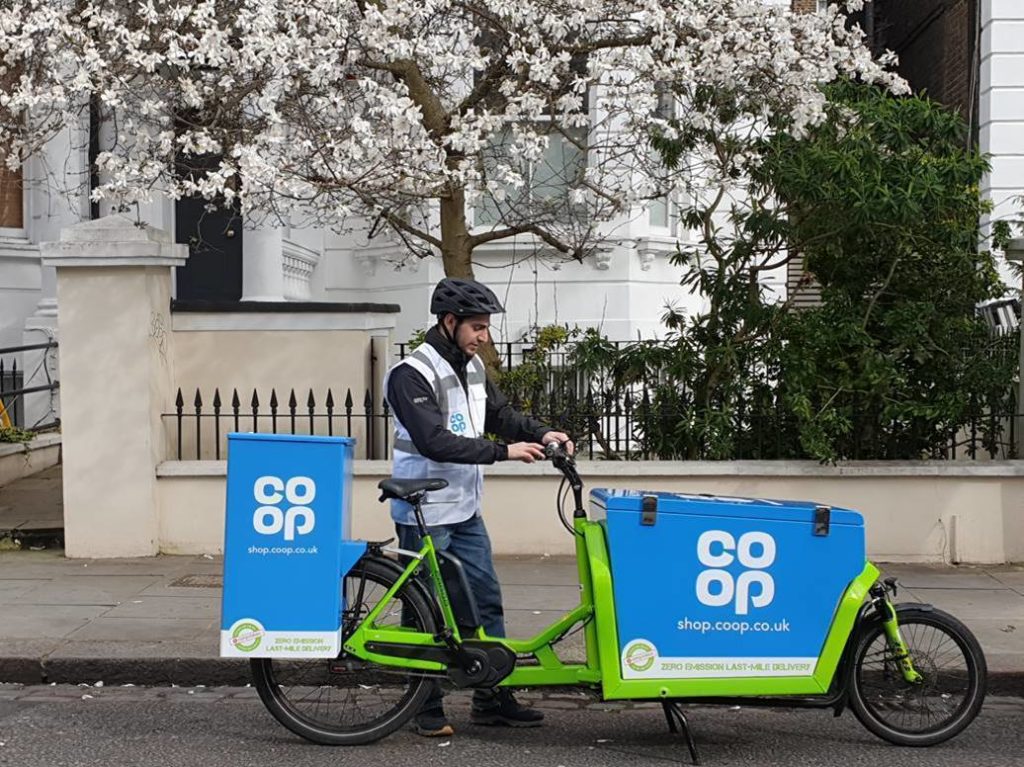 Co-op is a London based grocery chain that is now offering local deliveries by eCargo bikes thanks to a partnership with e-cargobikes.com and it is stated that ‘neither diesel or electric vans could complete cost effectively . The fast delivery time is due to the electrically assisted cargo bike’s ability to utilise cycle lanes, filter safely through standing traffic, pass between the narrow bollards adorning many of our streets, and park right outside customers’ homes and offices to make deliveries.’

Chris Conway, Head of Food Digital at the Co-op, said: “This is an exciting time for the Co-op. As the leaders in convenience shopping, we want to look at different ways of bringing our award-winning products closer to shoppers, and this new service with e-cargobikes.com does exactly that.”

James FitzGerald, Managing Director of e-cargobikes.com, said: “We are thrilled that Co-op are demonstrating environmental leadership by launching their online delivery service using e-cargobikes.com. We are reimagining grocery deliveries and exploring a more sustainable transport system – our e-cargobikes are able to deliver the same amount as a diesel-van over a shift but require only 0.5% of the energy.”

ARGO Cargo Kit Back in Stock

ARGO Cargo report that their kit, which can convert a regular bike into a cargo bike, will be back in stock over spring. It was formerly known as Lift.

To quote wikipedia, ‘Thousands of miles of railroads have been abandoned in the United States, much of it in the 40 years from 1965 to 2005. The right of way which has been established for such a line makes it useful for other transport, such as a rail trail. Other uses are possible.’

The other possible uses include this rather exciting-looking pastime:

The UK’s Isle of Wight is a well-known cycling destination for both mountain biking and road and leisure cycling, largely because of the staggering views from its upland and cliff areas.

Now local rider Adam Holleyman has been selected to take part in one of the UCI’s WES series of e-bike races.

This report tells us that Adam ‘a Wightlink-Wight Mountain Cycle Race Team rider, will travel to Monaco in April to compete in the first leg of the World e-Bike Series. Although he only started riding an electric mountain bike recently, Adam is an experienced road and mountain bike rider and was selected to take part based on his solid track record in competitive cycling.’

Will Bikes and E-bikes Catch on with Developers?

This fascinating article from Australian website The Urban Developer looks at the potential for bikes and e-bikes to be ‘built into’ new housing and commercial developments from scratch, rather than added on later as is usually the case at present.

It states ‘Health and wellbeing amenities for residents are now being considered by buyers to be “upscale” facilities in new buildings, and can also help a project achieve a desirable GreenStar rating or other award nominations for innovation. Alongside the potential project accolades, state-of-the-art health facilities can also attract new buyer demographics, add value to the project and highlight the developers commitment to both the environment and resident wellbeing – all things that can positively impact the overall profitability of the project and increase developer brand awareness.’

Most exciting of all for cyclists and e-bikers it adds ‘Although the industry has been quick to understand the importance of general health and wellbeing facilities (such as pools and gymnasiums), the next phase is heading toward the inclusion of high-end cycling facilities (such as end-of-trip facilities and bike share systems), which are poised to become the norm in many projects – both residential and commercial.’

According to this web report ‘Royal Mail are trialling e-Trikes that are powered with a combination of solar, battery and pedal technology…The trial will see eight new Italian e-Trikes in Stratford, East London, Cambridge and Sutton Coldfield over the next few weeks. This will last for six months when the company will decide whether or not to do a UK national roll-out.’

The UK’s Bikebiz tells us that ‘New research has revealed the “alarming extent” of the UK’s pothole problem, with London’s pothole count currently exceeding 49,000, an increase of 33% in 2018 compared to the same period in 2017…’

Poor on-road cycling conditions for UK cyclists are also highlighted in this Scotsman report. It reveals that Sustrans, the fantastic charity that conceived and helps implement and maintain the National Cycle Network, recently found that 80 per cent of the road sections of the network were in poor condition.’