In the news this week:

It’s Official – This is the World’s Lightest eBike 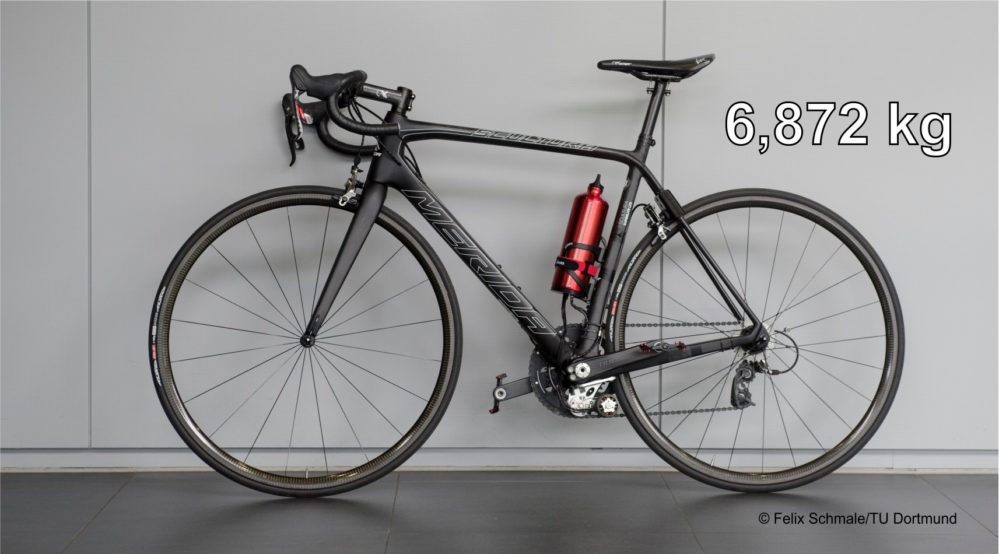 The Freicycle from Germany has been confirmed as the world’s lightest e-bike. The one-off e-bike (no, unfortunately, you can’t buy this in the shops yet…) is based on a Merida Scultura Superlite LTD, and according to Freicycle’s website GUINNESS WORLD RECORDS has officially confirmed the record.

According to Guinness World Records ‘The lightest electric bicycle prototype weighs 6.872 kg (15 lb 2.40 oz) and was achieved by Dennis Freiburg (Germany) in Dortmund, Germany, on 3 December 2019. Dennis is a mechanical engineer and was, impressively, studying for his doctoral degree in Dortmund while undertaking this project. The construction of the bicycle started in October 2018, so taking just over a year to complete.’

The e-bike is powered by a specially developed friction roller drive. The motor can be switched on or deactivated while driving. The e-bike is a pedelec and only supports if you are actively pedaling.

Although the record was achieved at the end of last year it seems to have been little-publicized since then. 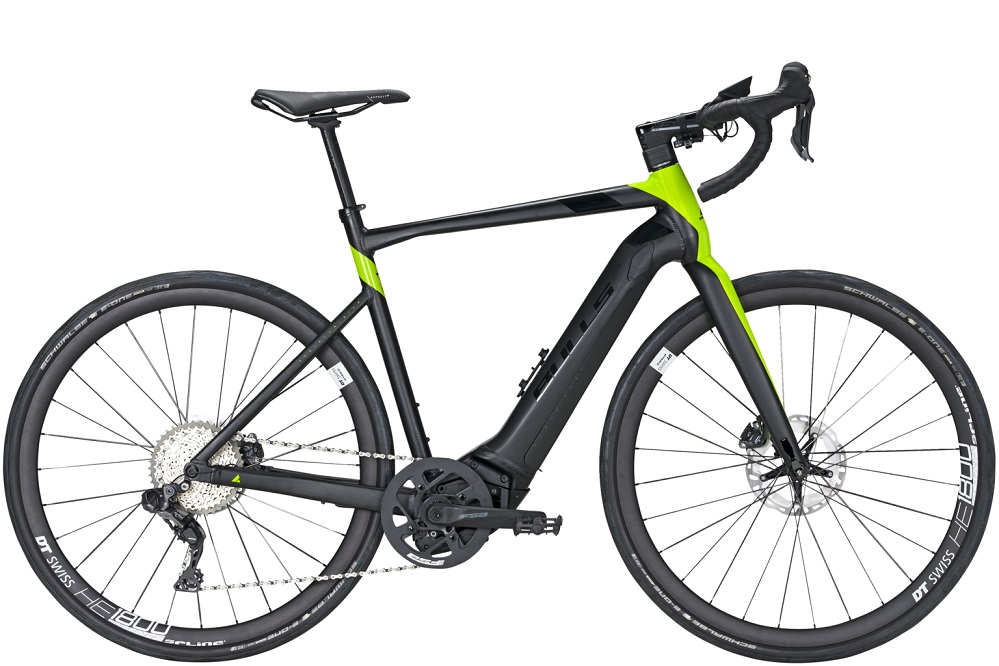 BULLS first speed pedelec road machine to arrive in the US

BULLS Bikes USA recently announced the release of the all new Desert Falcon EVO, the first true electric road bike released by BULLS in the U.S. The Class 3 eRoad bike uses the latest Bosch Gen 4 speed-equipped mid-motor that will assist up to 28mph.

The Desert Falcon EVO is available in 50, 55 and 60cm frame and is available now. Riders can order through their local BULLS Dealer or at BullsBikesUSA.com. Retail price is set at $6299.

New Lightweight eBikes for Baby Boomers from the UK’s Islabikes 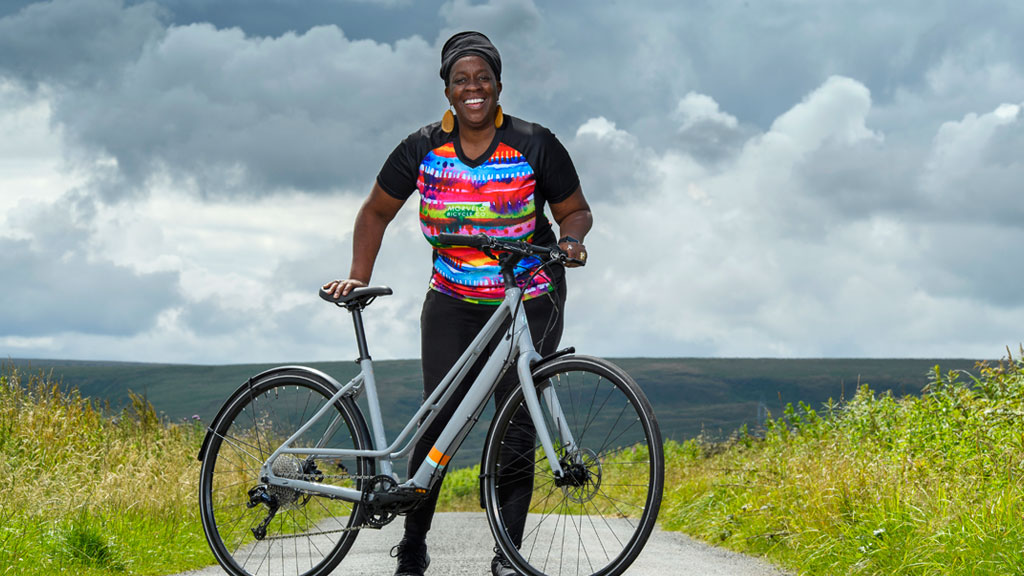 UK bike manufacturers have a long track record in producing high-quality children’s’ bikes but have now produced their fist e-bikes and they are aimed at the older generation who want lightweight, easy to use, low geared models.

There are two models, the urban-focused eJanis and the emtb eJimi.  Claimed weights are 13.5kg and 13.8kg respectively. Both models use the Ebikemotion rear hub system and feature non-removeable (by the end user) frame-incorporated, modestly-sized 250Wh batteries. There are also four frame sizes including a super small 14″ one. 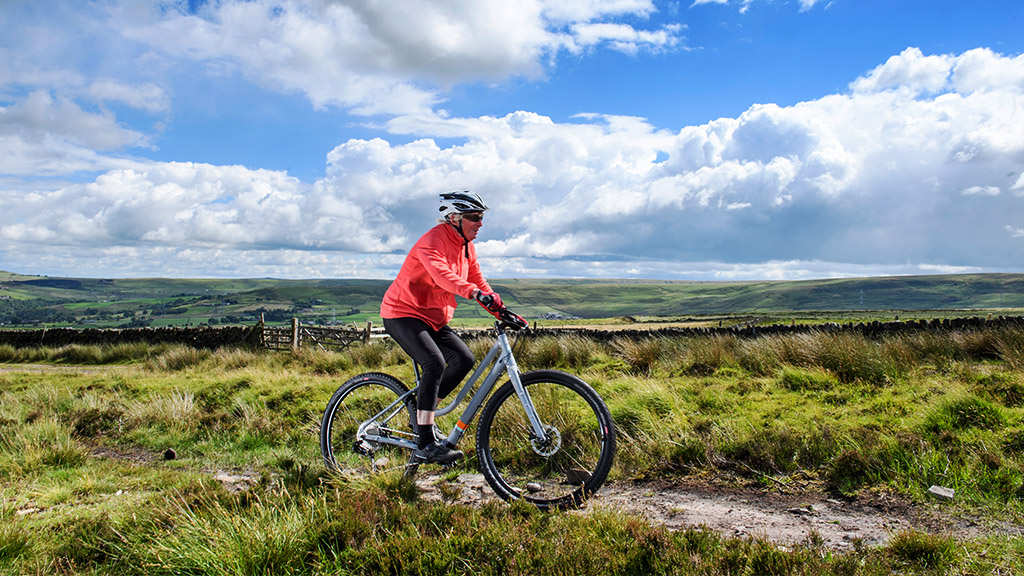 Both models feature step through frames, ideal for older riders, carbon front forks to help keep the weight down and super-low gears for making hill climbing easy on creaking knees. They are also designed to be easy and fast to pedal should the battery run out or if simply don’t feel the need for electric assist. Both models retail at £2499 and are currently shipping in the UK only with possible overseas shipping in September. 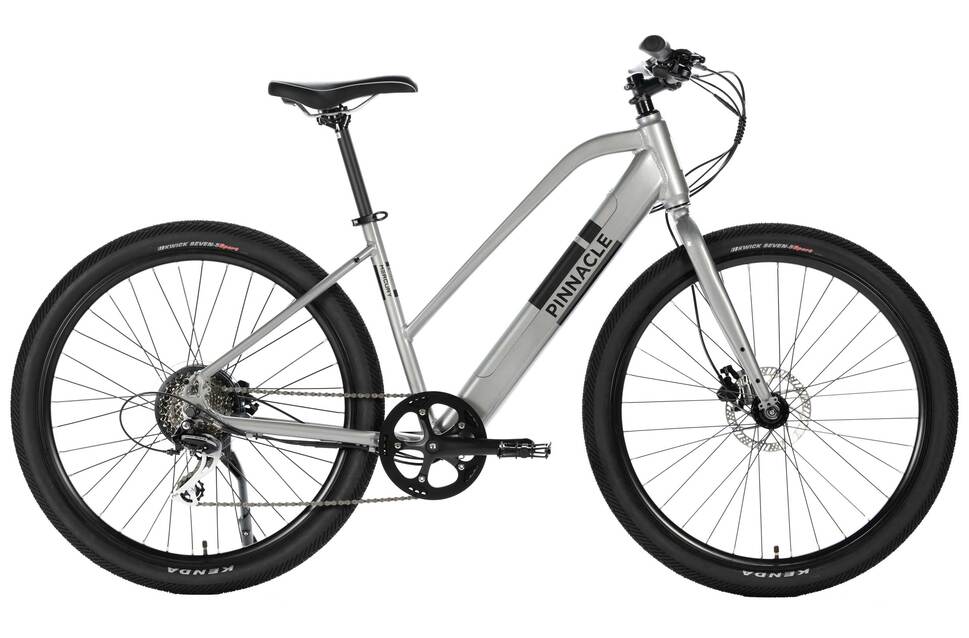 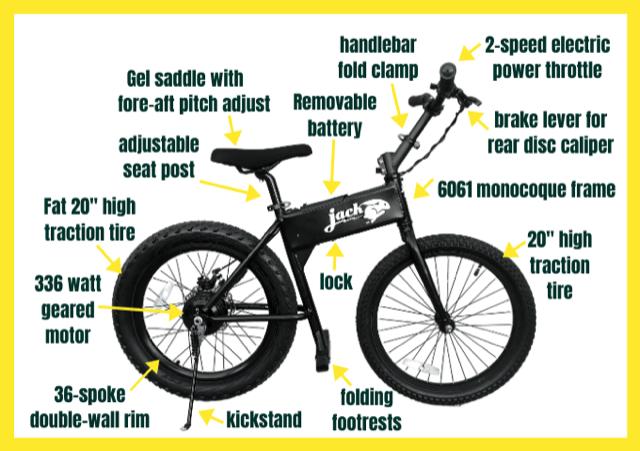 The JackRabbit has many novel features

The JackRabbit is billed as ‘the best of bicycles and the best of scooters’.  It has a claimed weight of just 23lbs / 10.4 kg. It’s pedal-less and features relatively big wheels on a small frame, meaning it’s easy to get on and off and put your feet down, whilst the 20″ wheels with fat tires give stability of handling. Stopping power is via a rear mechanical disk brake. The small overall size is also aimed at riders who want to be able to bring the bike indoors or wheel it onto mass transit. A throttle powers a rear hub motor up to 20mph and the batteries are in the frame. The handlebars fold down for easier storage, there is a kickstand and it can also be fitted with a rear rack.

JackRabbit say ‘Electric scooters and skateboards are fun but they face challenges in safety and extended ride-ability. Other quirky “micromobility” gadgets are out there too but their weight, complexity, and extended ride safety issues cause them to end up in landfills too often.’  In other words JackRabbit believe they have a new and better form of micromobility.

Evari – eBike of the Future? 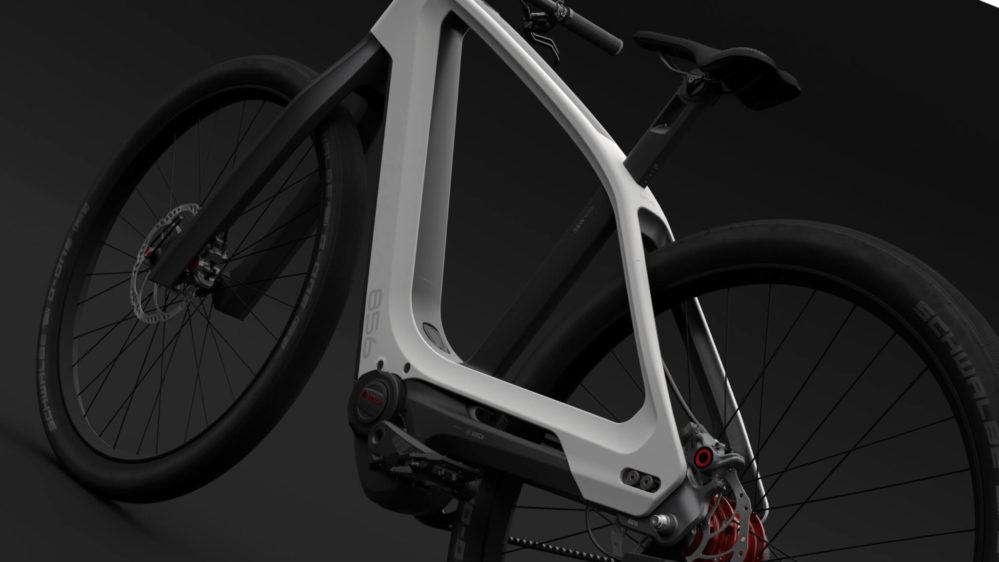 Slated for launch at the end of 2020, the Evari e-bike is a true high tech, high end design. If touts a carbon composite frame and forks, choice of single speed or Rohloff hub gears and a Bosch Performance Line CX mid-drive. Weight is claimed to start at less than 18kg. 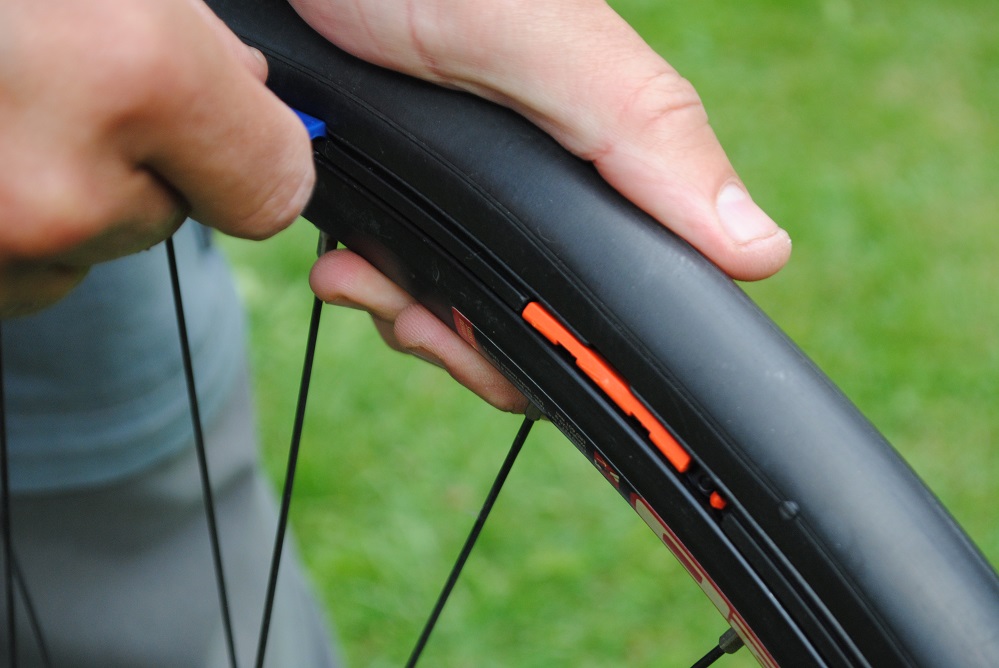 Gecko cellular rubber tires are puncture proof and have been around for a while – EBR has tested them and liked them for e-bike applications. Now comes a much narrower profile version due for release around September and with new benefits as outlined by Gecko:

• It is lightweight i.e. less than half the weight of the existing Gecko 700 x 40 tire and so has far better free rolling properties and so e.g. a ‘low weight/low inertia’ ride.
• It, therefore, has far better free rolling properties with a lower rolling resistance when cycling.
• It has a greater level of comfort
• Overall, with the excellent grip (in both wet and dry conditions) it offers a much-improved ride quality over all other known puncture proof bicycle tyres.

EBR has a set of prototypes and a brief test ride indeed confirms they feel much faster and as we fitted them ourselves we can also confirm that is a practical option – the ‘clip under the rim bead seat’ system used by many puncture-proof tires has in the past simply proved too difficult for us. Watch this space for a full review after we have put a lot more miles on them.

Tubeless tires do away with the separate inner tube usually found on pneumatic bicycle tires. In recent years the design has improved and they have become more popular, not least because they can be run at very low pressures for off-road grip (tires with inner tubes suffer from pinch flats at low pressure) and they also often utilize tire sealant to plug any puncture in the tire itself. Some e-bikes, often eMTBS, come with rims that are tubeless ready so you can convert to a tubeless system if you want to.

Here’s a lowdown on going tubeless so you can see what is involved:

One problem that rims running a tubeless system can encounter is damage to the rims themselves, especially if run at very low pressure over rough terrain. Tubeless inserts have been developed to protect rims in these circumstances and Tannus have launched their latest model of of tubeless tire insert.

Tannus describe themselves as ‘…the world’s number one brand of airless tires and is an innovator of tire inserts.’ Their new tire insert is made of their Armour product, constructed of Aither 1.1 foam, the same material used to make protection inserts for pneumatic tires. Tannus say it cushions the rim, protecting it from damage, and also gives a smoother ride.

Cycling Designs have been developing the Cyclesight rear view monitor for cyclists for a while now though nothing appears to be avaialble to consumers as yet. They have, however, made this new video which explains the concept clearly:

New eBike Mag From the UK 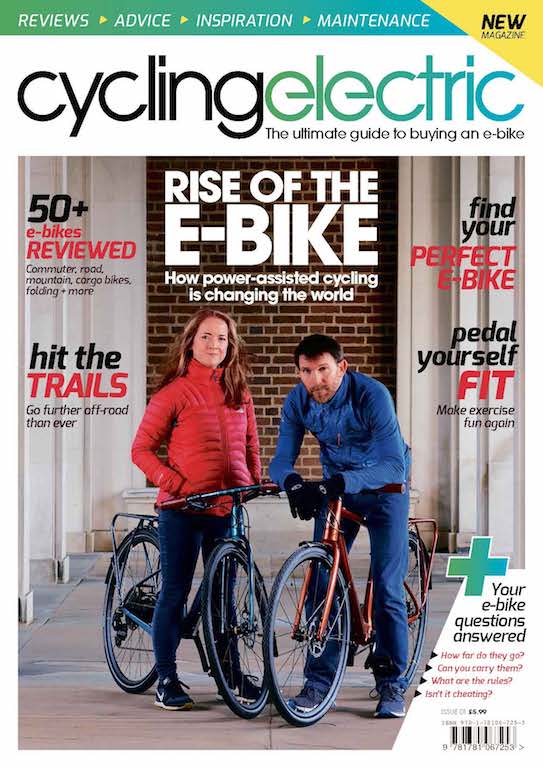 Eurobike, Europe’s biggest bike trade show (and also one of the biggest in the world) is all set to take place in late November. The organizers say ‘The special edition Eurobike show in November is the ideal opportunity to conduct important face-to-face talks at the end of the season and to kick off the new 2021 bike business year,” explains Klaus Wellmann, CEO Messe Friedrichshafen, in the run-up to the key industry get-together on 24 to 26 November 2020. The new corona ruling by the state of Baden-Württemberg has laid out the requirements for a safe and secure trade fair. With detailed guidelines and hygiene measures in place, the show enables exhibitors and visitors to plan ahead with certainty.’

Dutch e-bike manufacturer Stella suffered lithium-ion battery fires at its storage facilities in recent years and has just responded with their new extra safe storage facility. Bike Europe reports that ‘According to Stella E-bikes, “the technical specification of this battery warehouse exceeds the requirements laid down in the concept of the new regulations in the Netherlands. Our new storage is seen as an example for others in the industry to develop their own battery warehouses.” The new regulations on lithium-ion batteries (PGS-37) will be enforced in 2021.’

The article adds more detail on the logical storage system designed to isolate any fire incident so that it causes minimal damage, ‘The warehouse with a capacity of 36,000 batteries is subdivided into 13 airtight compartments in order to scale down any calamity. In the event of an emergency, the relevant compartment is closed and is filled with a special aerosol to stop the ignition within 30 seconds.’