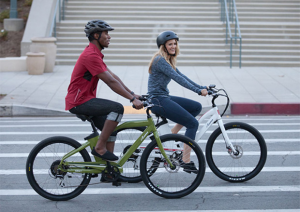 The study, “Differences of Cycling Experiences and Perceptions between E-Bike and Bicycle Users in the United States” was published in the Sustainability scientific journal.

The researchers asked 806 online respondents a range of questions related to their e-bike use. There were three groups – conventional bicycle only owners, a second group who had both an e-bike and a a bicycle, and a third group who only had an e-bike.

Electric Bike Report spoke to one of the researchers on the project, Ziwen Ling of the University of Tennessee about the findings of their report.

Ziwen Ling (ZL): According to our survey result, e-bikes users are more likely to use them for utilitarian purposes than conventional bikes, especially people who own both e-bike and bicycles. We think e-bike users tended to replace car trips. 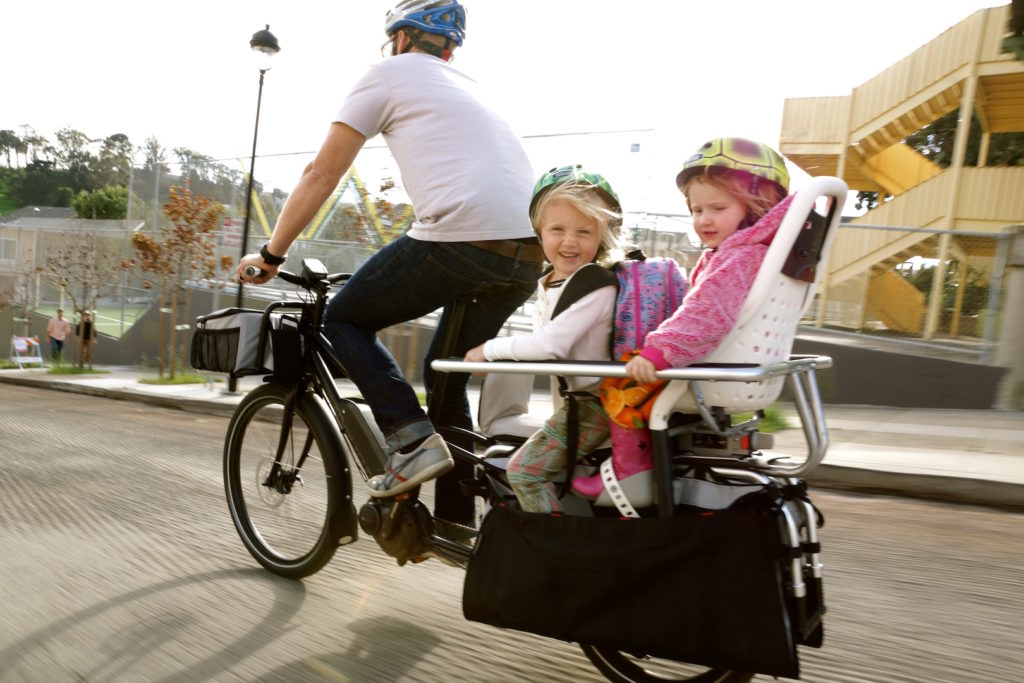 Based on our research result, e-bike users are more likely to use them for running general errands around residence, and primary means of getting around, and carrying goods and kids.

It shows that people use e-bike for neighbourhood transportation a lot. These trips may be car trips in the past, though we don’t have data to confirm this.

EBR: Can you see a possible reduction in car use among e-bike users? Could e-bikes tackle congestion in cities?

ZL: We don’t have data to support if there is a reduction in the car use among e-bike users directly. E-bike users are more likely to use them for running general errands around residence, primary means of getting around, and carrying goods and kids which may be car trips in the past.

E-bikes are a good way to reduce congestion in cities, especially cities with bicycle-friendly infrastructure. Bicycle sharing systems have boomed in many cities around the world, providing available shared e-bike to citizens, and attracting more people get to know the benefit of e-bikes.

The emerging and popularity of e-bikes can reduce car trips and reduce traffic volume on the road, and reduce congestion and parking problem of cars.

Besides congestion reduction, e-bikes could become one of the primary drivers of low-emission (zero-emission during driving) and reduce global greenhouse emissions.

EBR: E-bike riders use their machines more frequently. Why might this be the case?

ZL: With power assistance, many barriers to cycling are reduced or overcome, including increasing age, physical limitations, hilly terrain, a lack of time, and a lack of fitness or the perception of fitness that is needed to cycle.

While power assistance makes riding easier, riders still gain some physical activity benefits by pedalling. Compared to a conventional bicycle, riding an e-bike requires less physical effort, which makes e-bikes attractive to people with a physical limitation or as a rehabilitative tool.

EBR: Age. Millennials and Generation X people tend to use e-bikes as a primary form of travel. Are these primarily city dwellers? Does this mean they are less likely to use or have access to a car?

ZL: It is a very good question which requires more research. Currently, we don’t have information about their living locations. There are signs showing Millennials and Generation X may have a new lifestyle and understanding of transport.

We asked respondents the reasons for cycling. When the responses were disaggregated by age group, e-bike owners, especially Millennials and Generation X cycled for other benefits rather than just for health and fun.

Based on the reason of cycling, we think Millennials and Gen Xers may be less likely to use a car as the concern of environment protection.

EBR: Is cost a barrier to people getting an e-bike? Could lower cost yet reliable e-bikes make the market bigger?

ZL: When asked about the primary barrier to owning an e-bike, most of the Bicycle Only respondents (78%) chose “expensive purchase price”, followed by “expensive to maintain” (15%), “no availability in my area” (14%), and “not available in type or style I would want” (13%). 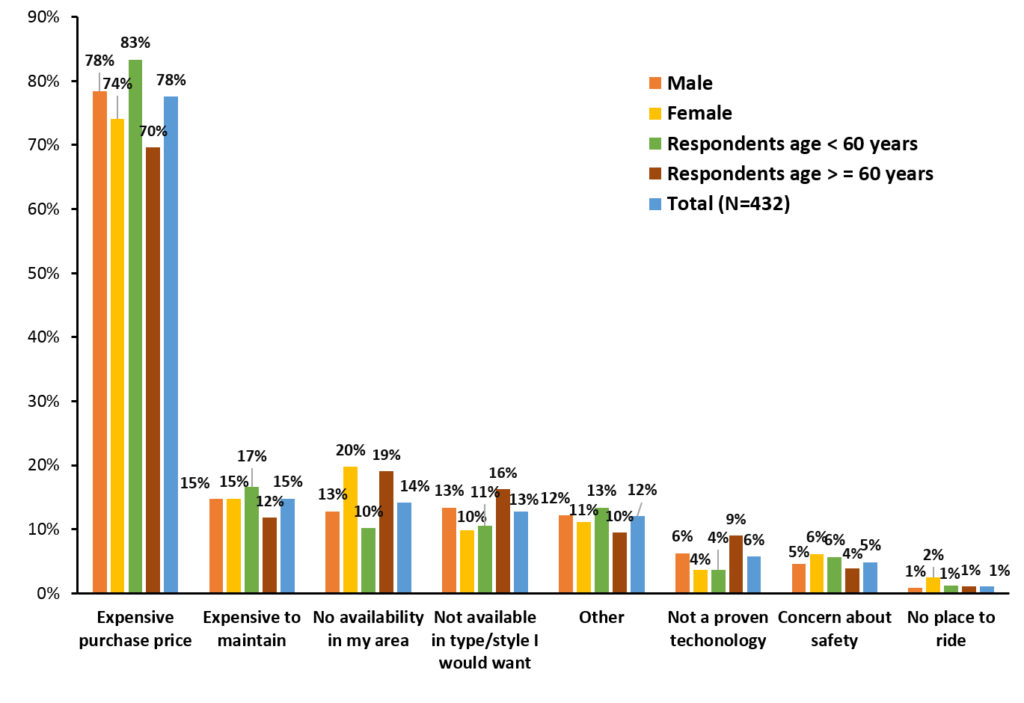 For the figure about barriers to owning an e-bike, the question is a multi-answer question. That’s why the total percentage of reasons is larger than 100%.

Younger respondents have the highest percentage for “expensive purchase price” and “expensive to maintain”, respectively, which suggests that e-bike industries may need to re-scrutinize or adjust market promotion strategy to attract more younger e-bike users.

EBR: How do these factors compare with the EU and Asia?

ZL: In Asia, e-bikes are very good mode for low cost mobility in developing countries which are in the motorized path way. 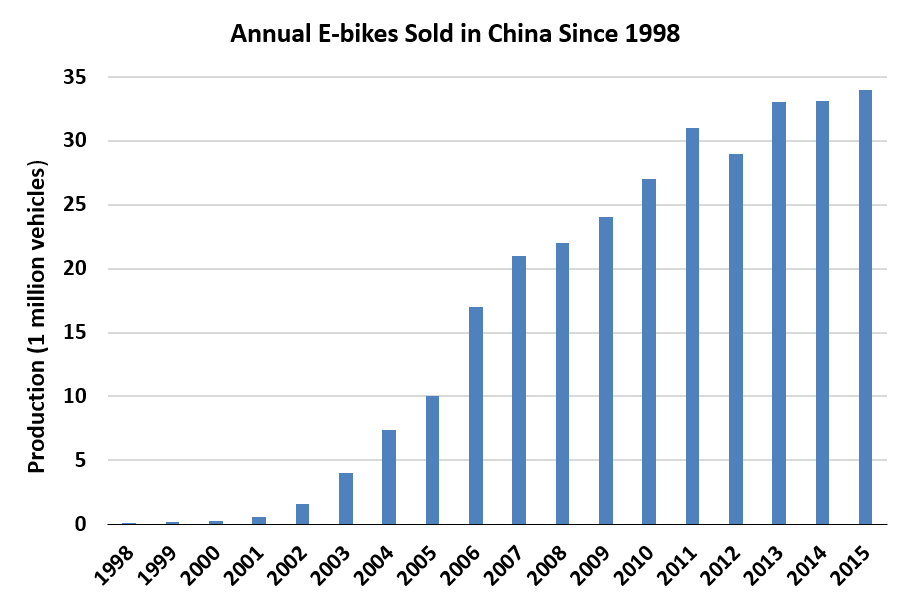 In the past decade, more than 150 million e-bikes have been sold, most of them in China or other Asian countries to a lesser extent. An e-bike usually costs $300 – $1000 in China and rarely needs pedalling.

According to Dr. Christopher R. Cherry’s previous studies in China, more than half e-bike trips are people who switch from using the bus, followed by those who switch from car or bicycle modes of transport.

In 2015, 1.2 million e-bikes were sold in Europe alone, and this figure is expected to triple by 2022. By comparison, the U.S. e-bike industry is still in its infancy, selling about 140,000 e-bikes in 2015 (and growing), while selling about 2.5 million conventional bicycles per year.

For the most part, China’s e-bike growth was driven by utilitarian needs for low-cost mobility. In contrast, the western e-bike market has been driven, at least so far, by higher income and older adults who use them for recreation, some utility, and extended mobility.

Most European and North American research has been published in the past five years, and focuses on emerging markets, user behaviour, health, and the effect on an aging population.