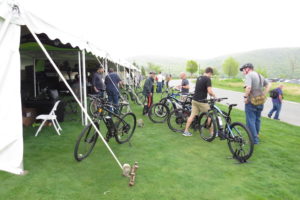 Journalists swarm to ride e-bikes at the Charged Up electric bike media event!

Yes, electric bikes are still relatively unknown to a majority of people in the US.

But hopefully that will change soon!

As a way to get the word out about e-bikes, Interbike (organizers of the largest bicycle trade show in the US) partnered with Outdoor Retailer to present e-bikes and other outdoor gear to a group of journalists from large mainstream media companies.

The Charge Up media event was held at the Crystal Springs Resort in Hamburg, NJ and the location was selected because it was a nice place to ride e-bikes while being close to New York City.  Some of the large media journalists were from NYC and others flew into the area.

The goal of the event was to introduce mainstream journalists to electric bikes and provide them with an experience to write about!

Here is a list of the mainstream journalist that were in attendance:

Tim Blumenthal, from People for Bikes provided a compelling presentation on the current state of bicycle infrastructure in the US.  It was definitely inspiring to see what is happening across the US, but we still have a lot of work to do. 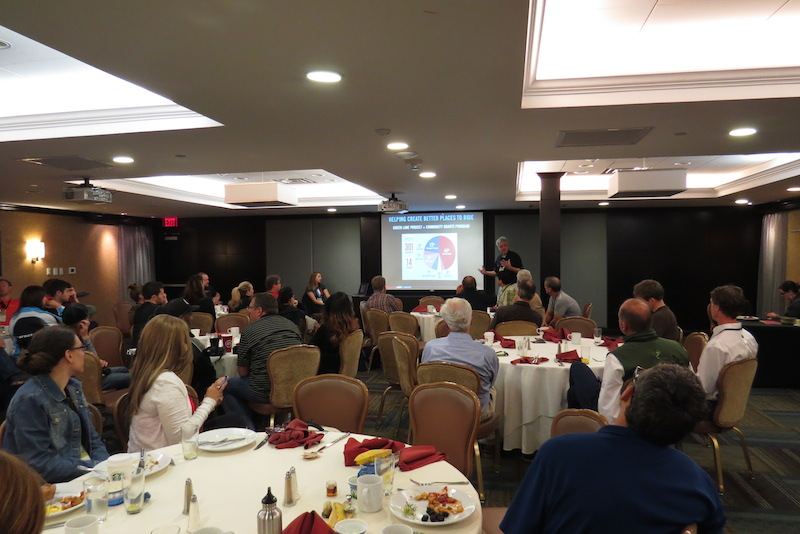 Tim Blumenthal from People for Bikes presents at the Charged Up electric bike event.

I highly recommend joining and supporting People for Bikes.  Support can be as easy as joining their email newsletter and sharing information about People for Bikes with your friends.  Donating money for better US bike infrastructure is also another way to show support for this organization.

After the introductory speeches, we were turned loose on riding electric bikes from the following e-bike brands:

There were a lot of smiles as many of these journalists had never ridden an electric bike.  In fact, there were a few that had not ridden a bicycle in many years!

It seemed that everyone was having a good time trying all of the different types of e-bikes: e-commuters, e-beach cruisers, e-mountain bikes, e-cargo bikes, e-folding bikes, high speed e-bikes, etc.

During the event it was fun to chat with journalists who had different audiences.  A lot of the journalists thought that e-bikes will be of interest to their readers.

Robert Wittmann, CEO of M1 Sport Technik, shows off their carbon fiber electric bikes; the M1 Erzburg , the M1 Secede, and the M1 Sedan. These bikes are being distributed in the US by Pete’s Electric Bikes (no relation to me!)

In addition to electric bikes there were also a number of outdoor focused gadgets on display at the event.

Overall the Charged Up event provided journalists with a great way to sample a wide variety of e-bikes and get to know some of the brands in the industry.

Keep your eye out for e-bike articles from the publications list above.

And please remember to tell your family and friends about e-bikes.

Let’s get more people on bikes!