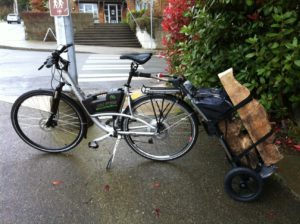 The Burley Travoy trailer with an Ohm electric bike.

This is a guest post from Cathy Lau of Ohm Electric Bikes.

Dave Somers knows how to maximize the potential of his electric bike. Taking advantage of his OHM XU700’s ability to take the weight off heavy loads, he hitches his Burley Travoy Trailer on for almost every ride. The Travoy’s quick-hitch mechanism and 60 lb carrying capacity turn his OHM into an instant cargo bike.

Dave recently put his OHM and Travoy to the test when he decided to ride with 30 lbs more than the maximum load recommended.

Here’s what Dave had to say about how he ended up overloading the Travoy with 90 lbs of weight, and how the bike and trailer held up against it:

“I have a friend over in Port Angeles who sent me a couple of nice pieces of Maple for woodturning.  They sent it over with a friend who lives on the north end of Bainbridge Island.   That person is a walk on ferry user and wasn’t excited about schlepping logs on the ferry by hand, so I did a wood run to pick them up myself.

I started at 5:30am from the boat at Shilshole and rode to work downtown with the Travoy and 20 lbs on it. (I used a spring scale to weigh things since I was concerned about weight.) After work I rode a short distance to the Bainbridge ferry and ran over to Bainbridge Island. From there, I rode about 3 miles to my friend’s house, weighed the wood at 70 lbs, and loaded it onto the Travoy. It seemed to handle the load fine. I then rode 3 miles back to the ferry and went back downtown.  Then I biked to my shop about 9 miles using the Ballard Bridge. I dropped the wood off there and then rode back to my houseboat, about 3 miles.

The Travoy handled the weight just fine. I was aware it was there, but it was far more stable-feeling than if I had loaded some panniers to just 40 or 50 lbs.

I did not need to work in a very low gear. Except for about perhaps a 150 ft elevation gain, the path is along the water and level. I didn’t have any headwind. I almost never drop out of my highest sprocket on this route and found the same was true even on this run.  I did use Level 1 assist along the way and used Level 2 on the hill. That made the run pretty pleasant.”

Dave has been using his Travoy for about a year, and describes his decision to buy one as “easy”:

“I travel over the Ballard bridge a lot, as well as the locks. Most trailers are an issue on those routes, but the Travoy was perfect for them.  It could be wheeled into a store and used as a cart so I didn’t have to worry about securing it while shopping. And since I live on a boat it was nice that it quickly folded up compactly for storage.”

Though he doesn’t usually push the limits of his trailer, he does regularly use it to hold big loads.

“Typically I use the trailer to cart tolls from my shop to the boat. To carry groceries, especially if my load is heavy with cans and liquids. And I also use it for 10 lb propane tanks when I go to fill them.

I do still use my panniers. I have a big set of Ortliebs and they are as waterproof as you can get.  The rain fly on the Travoy is good but I am not sure how much I trust it yet for sensitive things. 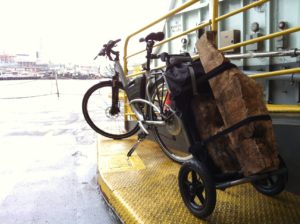 [The 90 lb wood load] is the largest load I have carried on the trailer.  I would be reluctant to do more even though it handled it easily. It was 30 lbs more than they rate the trailer for (60 lbs). I hate to be too abusive.”

How much battery power did his OHM electric commuter model bike need to make riding with his 90 lb load feel pleasant?

“I barely used one bar on the battery gauge between using it on level 2 for 10 miles from the office to home Tuesday night, then 10 miles from home to the office Wednesday morning with the trailer and 20lbs of stuff, and then to north Bainbridge to gather the additional 70lbs, and then back to Fremont and then home again Wednesday night. Pretty good.

My commute is all downhill going to the office, and a lot of uphill going home. I had ridden my old Cannondale up from my office downtown and realized that while it was certainly bikeable, it was going to be a slog after late days at my office in the cold and rain. I try to bike commute every day, so I started researching assisted bikes and was most impressed with the OHM. Now that I have my OHM, I really appreciate it.”

Until July 15 2012, OHM Cycles is holding a contest to give away a Burley Travoy Trailer to one lucky OHM fan. The contest is open to residents of Canada and the US, ages 19 and up. To enter, simply go here and “like” the OHM Cycles Facebook page and enter your email address to sign up for the newsletter.