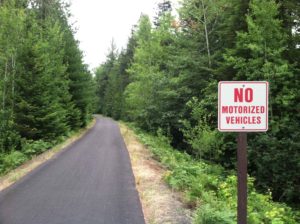 Does this mean NO electric bikes? Not necessarily.

This is a guest post from John Mosley, a long-time avid cyclist who found himself unable to ride a conventional bike after suffering a brain tumor. He bought a step-though electric bike and is now back in the saddle and loving it.

Head to your nearest bike path or rail-to-trail, and the chances are excellent that you’ll see a prominent sign stating unambiguously NO MOTOR VEHICLES. That would seem to leave us riders of electric bikes out in the cold (or at least off the path), but a new regulation that expands the Americans with Disabilities Act declares such prohibitions null and void, at least until new procedures are adopted.

It seems that few trail administrators have, and until they do such prohibitions are invalid. And once new guidelines are in place, those ebike riders with a physical or mental disability are almost certain to be allowed to ride the trails — and perhaps those of us without disabilities as well.

The purpose of the new regulation (ADA Title II, Sec. 35.137) is to prohibit “discrimination on the basis of disability by public entities.” The entities of interest to us are all agencies that administer any public bike path or trail; the law seems to allow no exceptions.

In the past, agencies have been able to decree that motorized vehicles may not be ridden on such paths, but such prohibitions discriminate unreasonably against people with a disability.

The new regulation requires agencies to review their policies to permit the reasonable use of power-driven “mobility devices.” If a specific device is excluded, it must be on the basis of legitimate reasons of safety or harm to the environment. Agencies must specify which vehicles *are* allowed and must post these specifications publicly. Until such guidelines are posted, the agency is not in compliance with the law.

This is great news for those of us with an ebike and a handicap — which includes a lot of us. The law has in mind both returning young veterans who were wounded and are now unable to ride a conventional bike and older folk whose body is wearing out and who can no longer manage a bike like they used to.

Public cycling paths and trails should be open to use by such individuals and their powered vehicles, the law says, unless there is a clear (and stated) reason to exclude them. Ironically, powered wheelchairs were always permitted on bike paths; now the same courtesy must be extended to other powered vehicles.

Agencies now have to face the problem of determining specifically *which* powered vehicles can be allowed on which bike paths, and why others are to be excluded. They can take into account the type, size, weight, and dimensions of the vehicle, the volume of traffic on the path, safety concerns, and environmental and historical/cultural concerns. Whatever they decide, they must post the guidelines.

Ebikes are a shoo-in because they’re virtually silent, non-polluting, low speed, and take the same footprint as a non-electric bike, where a Segway might well be prohibited because of its width and gas-powered vehicles are not likely to be allowed for several reasons. 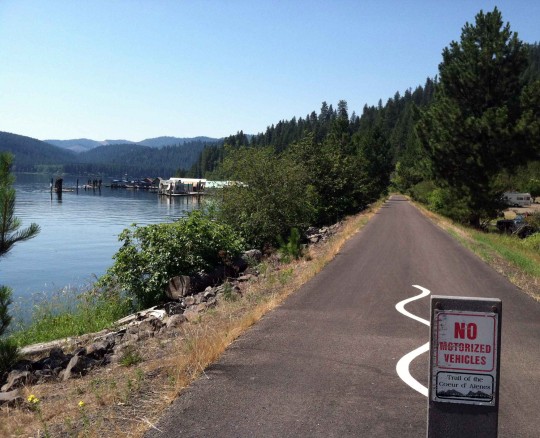 Riders on the Trail of the Coeur d'Alenes in northern Idaho are warned that motorized vehicles are prohibited -- but the agency that administers the rail-to-trail is in non-compliance with federal law and the signs are invalid.

A huge question that hangs over all discussions is how to determine that an ebike is a handicapped vehicle; the ADA regulation is to help *disabled* cyclists specifically, as opposed to anyone who happens to own an ebike who would like to ride the trails.

The ADA regulation makes it clear that an officer can *ask* a rider if the ebike is for disabled use but cannot inquire as to the nature of the disability or demand proof of a disability, so this leaves the question of enforcement wide open.

Without a way to certify an ebike as a handicapped vehicle with a decal or plate, it seems that the only option trail authorities have is to allow all ebikes (and other vehicles) that meet their standards to ride the trails, whether for handicapped use or not. This would be great news for all of us.

I suspect that just as people can have handicapped license plates and windshield tags issued by the state, eventually we might see the equivalent decal or small license plate issued by local police departments, perhaps upon receiving a note written by a doctor or upon receipt of a completed form.

And we might see a standardization in exactly what constitutes an accepted ebike so that a ebike licensed in one jurisdiction is honored elsewhere. If so, we can hope that the guidelines are written carefully and thoughtfully.

When trail authorities eventually issue guidelines as to which ebikes are allowable there may be a mixture of good news and bad news. Pittsburgh now allows ebikes on their trails, but only if the motor is 250 watts or less — to limit the speed to 15 mph. Bad regulation! This seems to be a clear case of discrimination — many of us have motors with a higher wattage to climb hills, not to speed along on the flat.

If Pittsburgh wants to limit speeds to 15 mph on their bike paths they should post and enforce a speed limit rather than ban ebikes with the theoretical ability to go faster on the flat. Hopefully agencies will get useful input from the ebike community before issuing guidelines that are then hard to modify.

The new regulations were posted in 2010 and went into effect on March 15, 2012. Complaints should be referred to the Department of Justice (there is a form for registering complaints at their web site), and all administrators of bike paths and rails-to-trails should realize that messing with the Americans with Disabilities Act and the Department of Justice is not a matter to be taken lightly.

I am an ebike rider with a physical disability (it’s specifically because of the disability that I bought an ebike). I cycle past the “no motorized vehicles” signs without slowing, but I carry in my pack a printed summary of the ADA Title II Sec. 35.137.

The text of the regulation.

A detailed discussion of the regulation, how it came to be, and guidelines for its implementation.

An article on how North Jersey is implementing the regulation and the problems it is causing.

Another article on how Pittsburgh is implementing the regulation.

Have you noticed signs like these in your town or city?  Have the local authorities tried to enforce a ban on electric bikes on these types of pathways?  Please leave your comments in the section below.