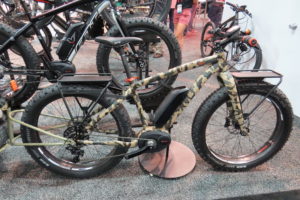 Felt Electric has launched some exciting new e-bikes to their line up for 2015.

Then the new Bruhaul electric cargo bike is ready to be your car alternative or replacement….

The Outfitter and Bruhaul are the 2 new bikes to their existing line up of the Bosch powered e-bikes: the fat tire LEBOWSKe, the full suspension DUALe, 29er hardtail NINEe, and the commuter/touring SPORTe.

Enjoy the following pictures for more info on the 2015 Felt Electric Bike line. 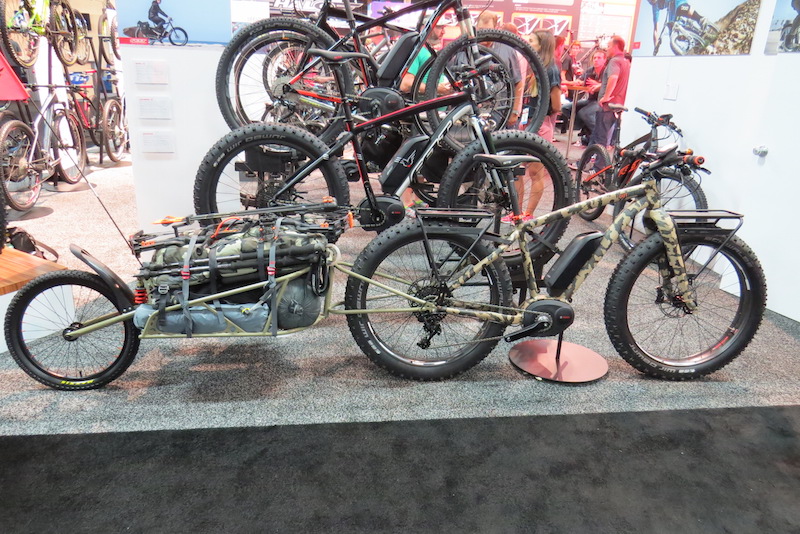 This is the Felt Outfitter fat electric bike with trailer all decked out for a camping/hunting trip. No word yet on price but it should be available later this year. 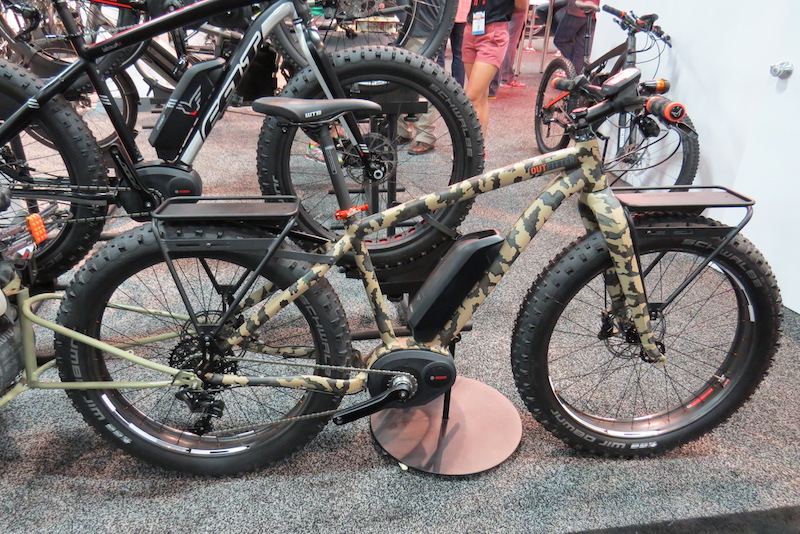 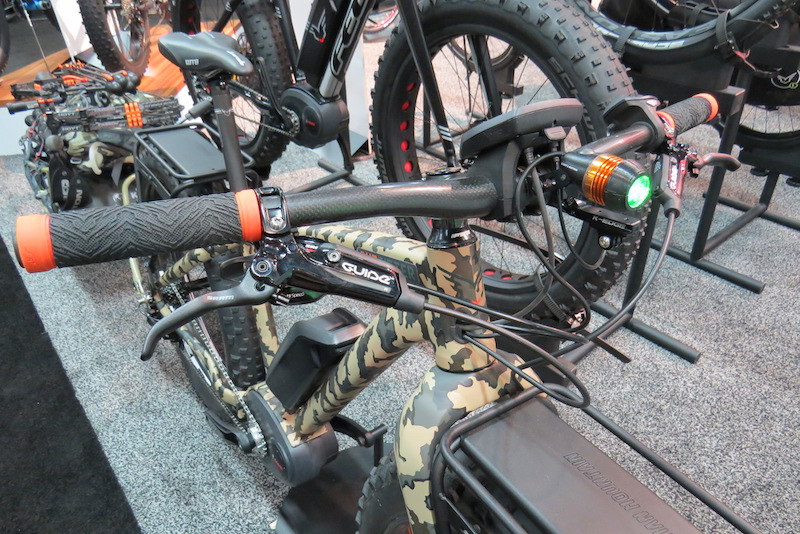 Here is a close up look at the carbon fiber handlebars, SRAM Guide brakes, and LED front light. 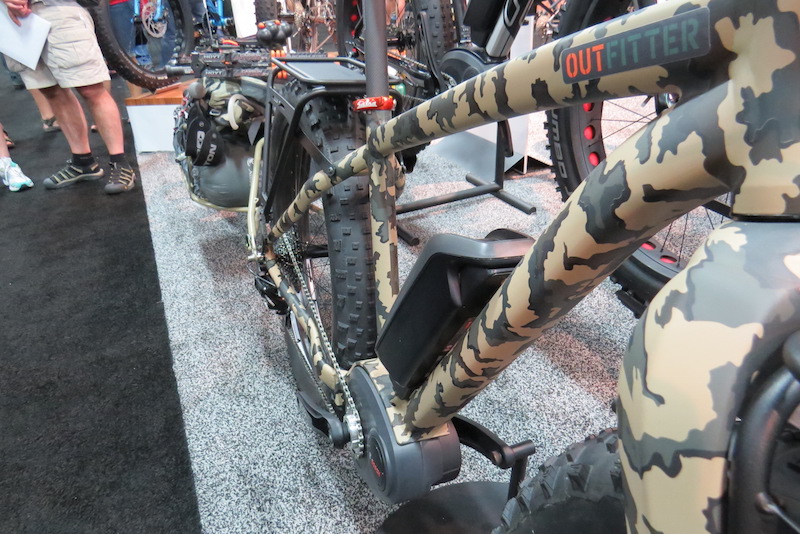 CAMO! The Outfitter is designed to blend in and silently travel through the woods. 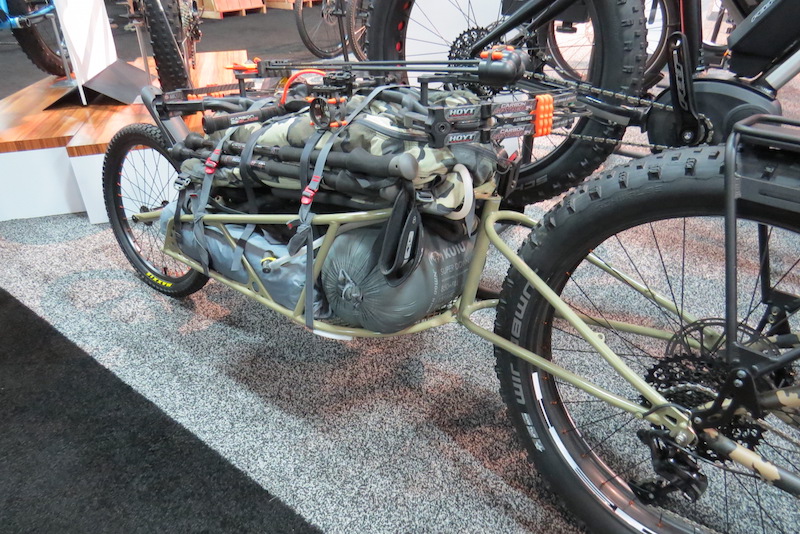 The rear trailer was decked out with camping gear and a bow and arrow set. Right after Interbike, Jim Felt (owner) took the Outfitter on a camping/hunting trip. 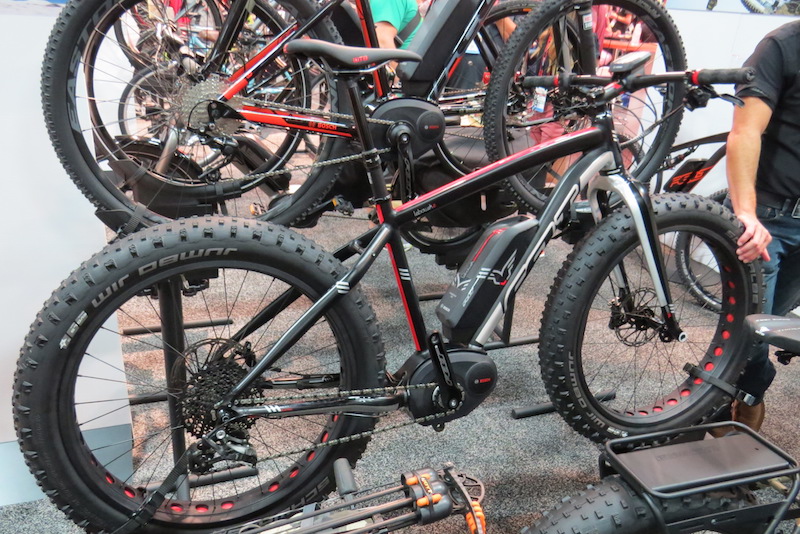 The LEBOWSKe is the Felt fat e-bike that is available for $5,799. This bike is decked out with the Bosch system and a bunch of SRAM X01 components along with the new SRAM Guide hydraulic disc brakes. 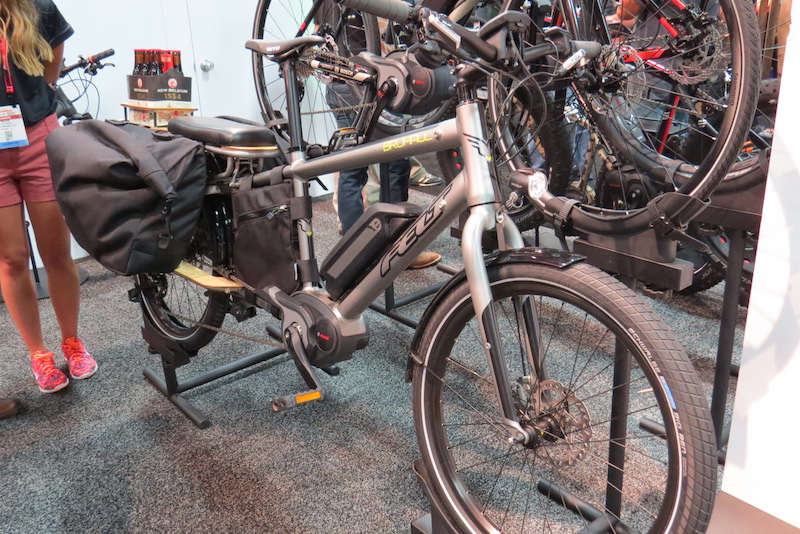 The Bruhaul is the new Felt electric mid-tail cargo bike with the Bosch mid drive.  It features 24″ wheels for quick acceleration, torque, and the ability to carry heavy loads. 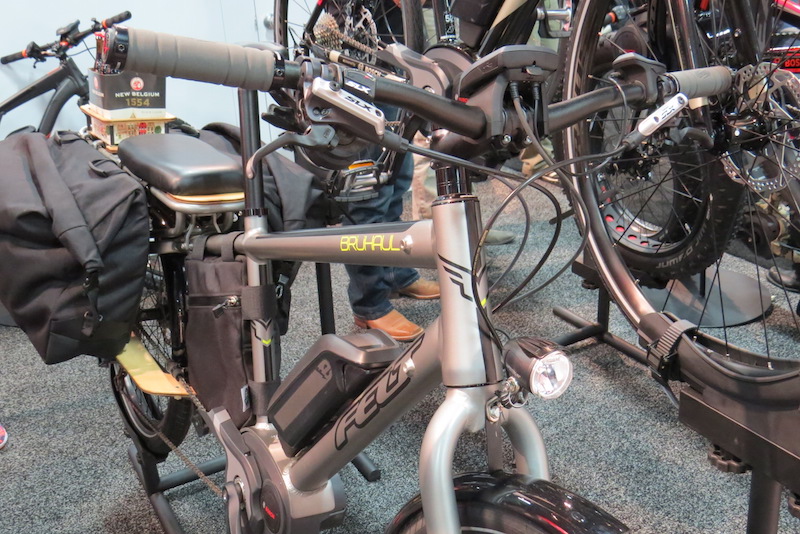 The Bruhaul has an aluminum frame that is design to haul! It comes decked out with Shimano SLX components, integrated lighting, and many options for carrying cargo and people. 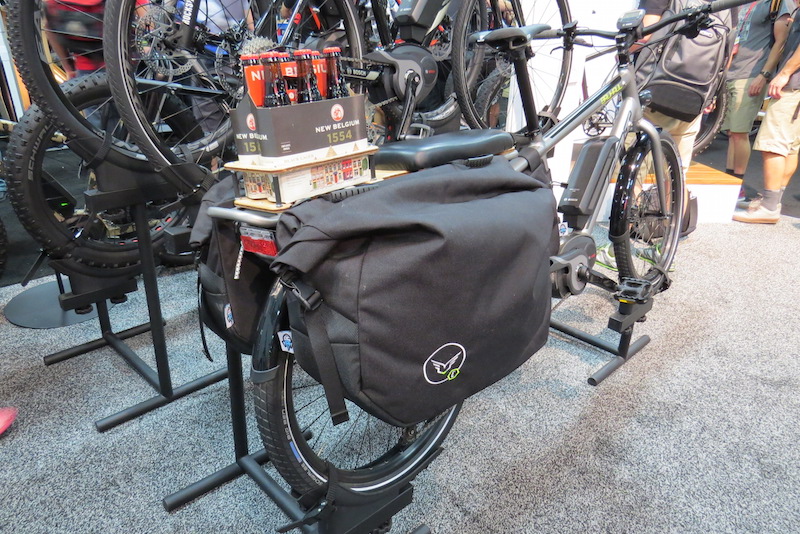 It even includes a beer carrying device!  The Bruhaul will be available in the spring of 2015. Stay tuned for more info on the Bruhaul. 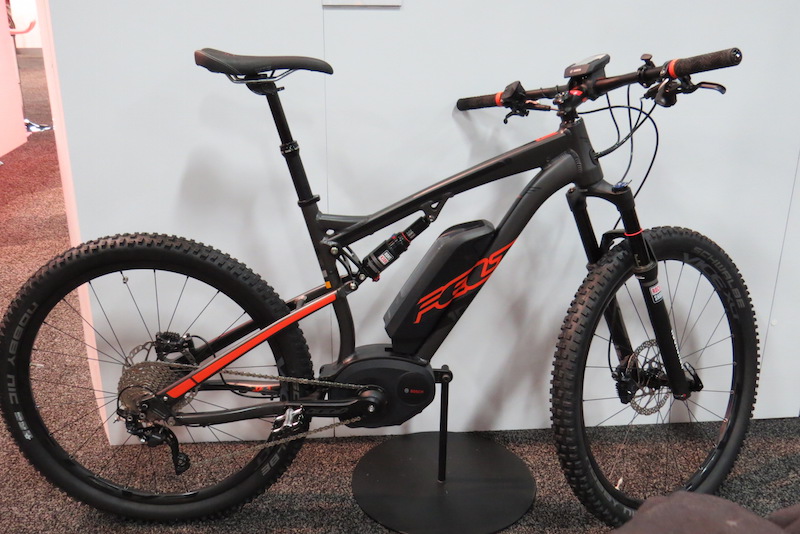 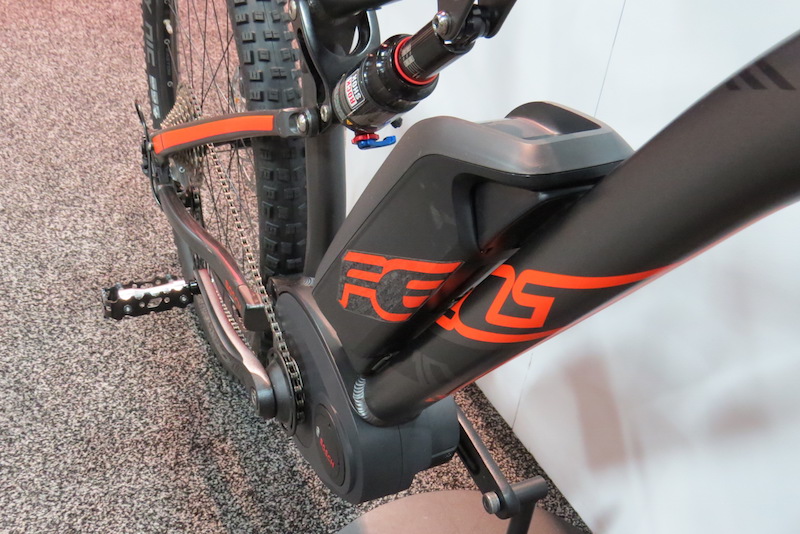 Here is a close up of the Bosch 400 Wh lithium battery on the downtube and the 350 watt mid drive motor. 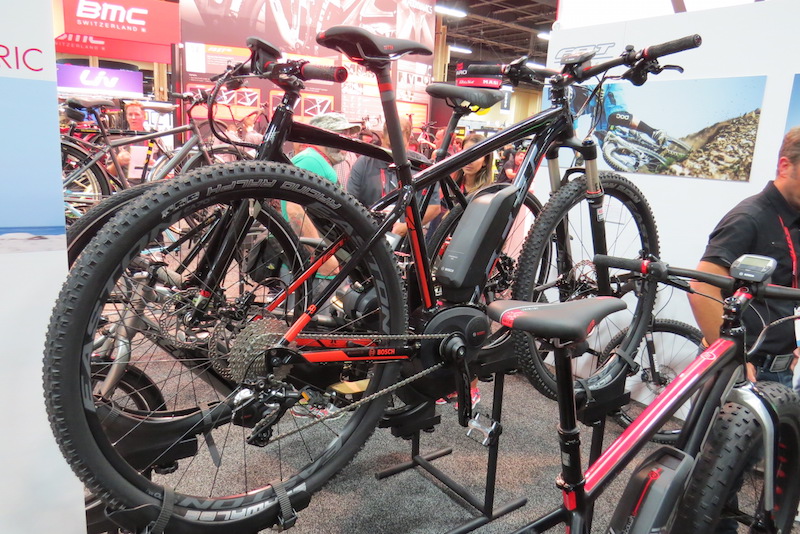 The NINEe is the Felt 29er hardtail that weighs 38 pounds! It also has a healthy selection of components from Shimano and Rock Shox. The NINEe is priced at $4,699. 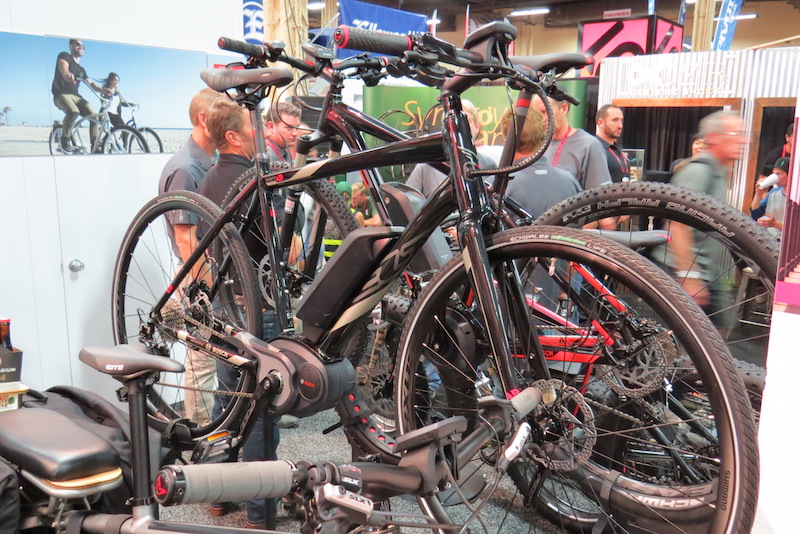 The urban/touring SPORTe rounds out the Felt line up at $3,999. It weighs 40 pounds, features Shimano SLX components, and it is also available in a low step frame. 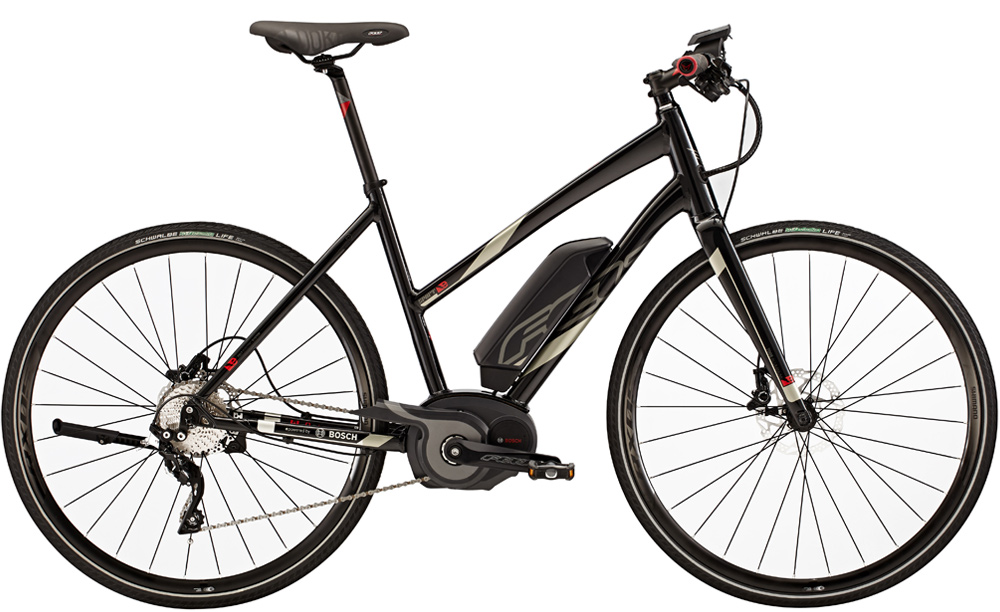 Here is the SPORTe step-thru.