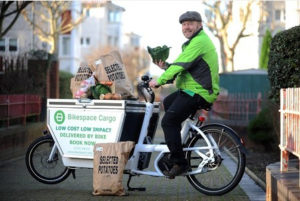 Outside of flatter cities and towns with a strong cycling tradition – such as Cambridge – cargo bikes (let alone electric cargo bikes) are very rarely seen.

But legal changes from April this year lifted the previous 40kg weight limit that had hampered the deployment of e-cargo bikes for commercial use.

With the UK’s electric bike law now harmonised with Europe, Electric Bike Report interviews two firms that have recently introduced electric cargo bikes and are making inroads into the ‘last mile’ delivery market and seeking to popularise the concept of cargo bikes.

Bikespace of Plymouth were established five years ago and have recently launched a public e-cargo bike hire scheme.

Outspoken are a Cambridge based firm, operating since 2005 and claiming to be ‘probably the largest cycle delivery business in the UK’.

Were electric bikes part of your businesses from the start?

Bikespace: We were initially founded as an education and cycle recycling project and the company has expanded into adult training, provision of pool bikes for organisations such as Plymouth City Council and in the last year has opened a retail store, specializing in electric bikes and a cycle logistics operation, Bikespace Cargo. 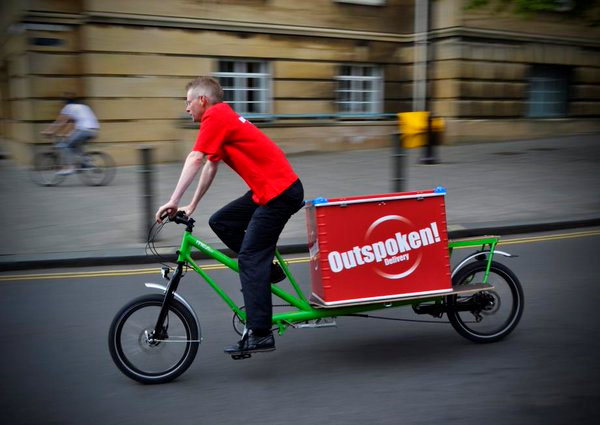 Electric assist would have been most beneficial on our cargo trikes but because of the weight issue if an electric motor was attached it would have been deemed to have been a motor vehicle requiring a number plate, the rider to wear a motorbike helmet and motorcycle type insurance.

However in April 2015 after much lobbying the legislation was changed to be aligned with the rest of Europe, meaning electric assist motors could be added to cargo bikes and cargo trikes and they would still be classified as bicycles subject to certain limitations such as maximum speed, power output of the electric motor and restrictions on twist and go capability.

Why have you chosen electric cargo bikes as opposed to other forms of cargo delivery?

Bikespace: Bikespace is an ethical company that does good things for the community and we have chosen to use the bicycle to achieve these ends. Whether that is providing workplace experience for young people, routes into employment or by helping reduce the impact of transport on the community through congestion and pollution.

Cargo bikes are the obvious solution to some of these problems for deliveries to hard to access city centre locations. They can be faster, have less impact and most importantly for local business are lower cost than making the same deliveries using a small van. 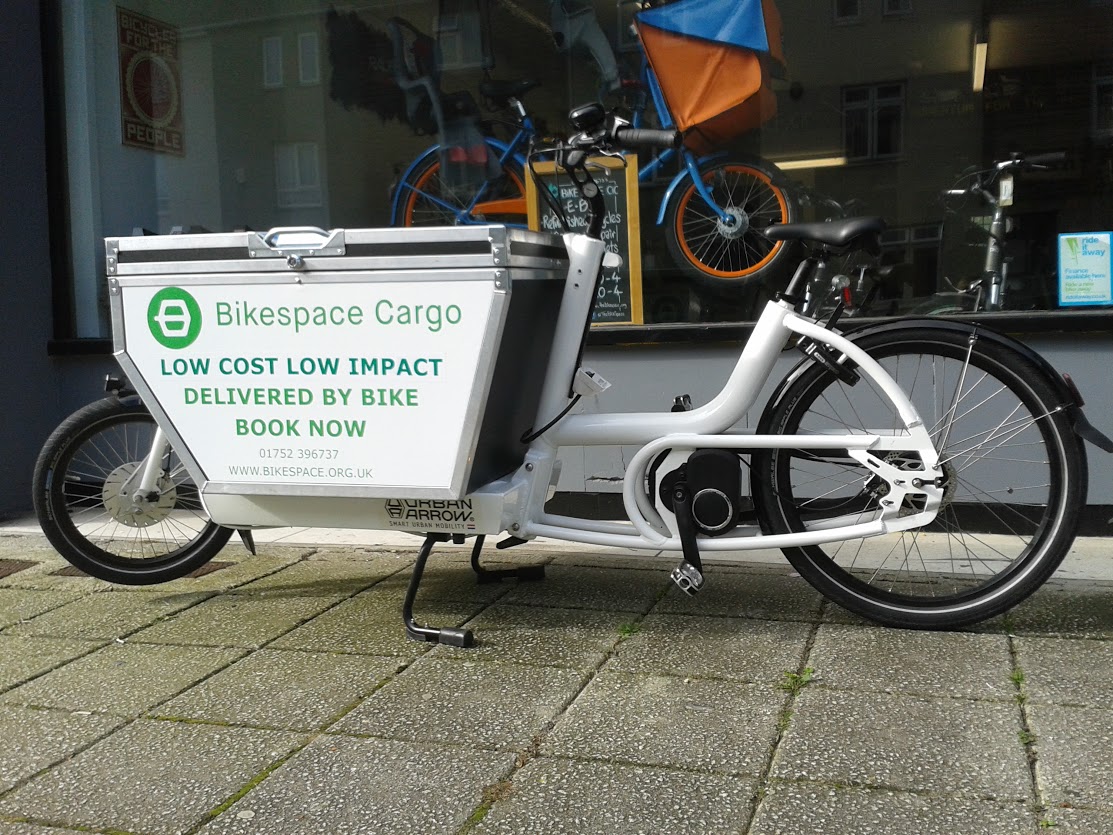 After visiting the Cargo Bike Festival in Nijmegen, Holland we chose to use the Urban Arrow cargo bike. It is designed and assembled in Holland, with a high quality alloy frame, excellent components and a Bosch Activeline electric drive system.

It has stood up to the rigours of daily use really well and was used in a trial by the National Trust with an 80kg payload (of ice-creams!) and used over rough ground, without a single issue. Indeed, we refer to refer to it as a commercial vehicle, rather than a bicycle, as it better describes what it is and demonstrates to potential customers that it is viable alternative to motor vehicles.

One local company, Rockets & Rascals, has replaced their small van with an Urban Arrow Cargo Bike for all their local deliveries and service calls. Bikespace has been helped to promote the use of cargo bikes by Plymouth City Council, who have subsidised a cargo bike loan scheme that allows local businesses, large and small, to borrow a cargo bike for an extended period to understand how it can reduce their costs and impact and improve their service to customers.

Outspoken: Since it was first started Outspoken Delivery has always been a cycle based delivery business.

Cambridge located in the East of England is flat with a modest hillock and a few railway bridges so was just about manageable using manual drive cargo bikes and trikes. However the change in the UK legislation regarding electric assist in April 2015 allowed Outspoken Delivery to start to upgrade its delivery fleet to include electric assist bikes and to consider expansion to other towns and cities with more challenging topology.

As a delivery company the main benefits of electric assist are:

– improved utilisation of our riders as they are able to work longer. Our riders can easily be riding up to 40/50 miles per day with loads which is not sustainable 5 days per week. 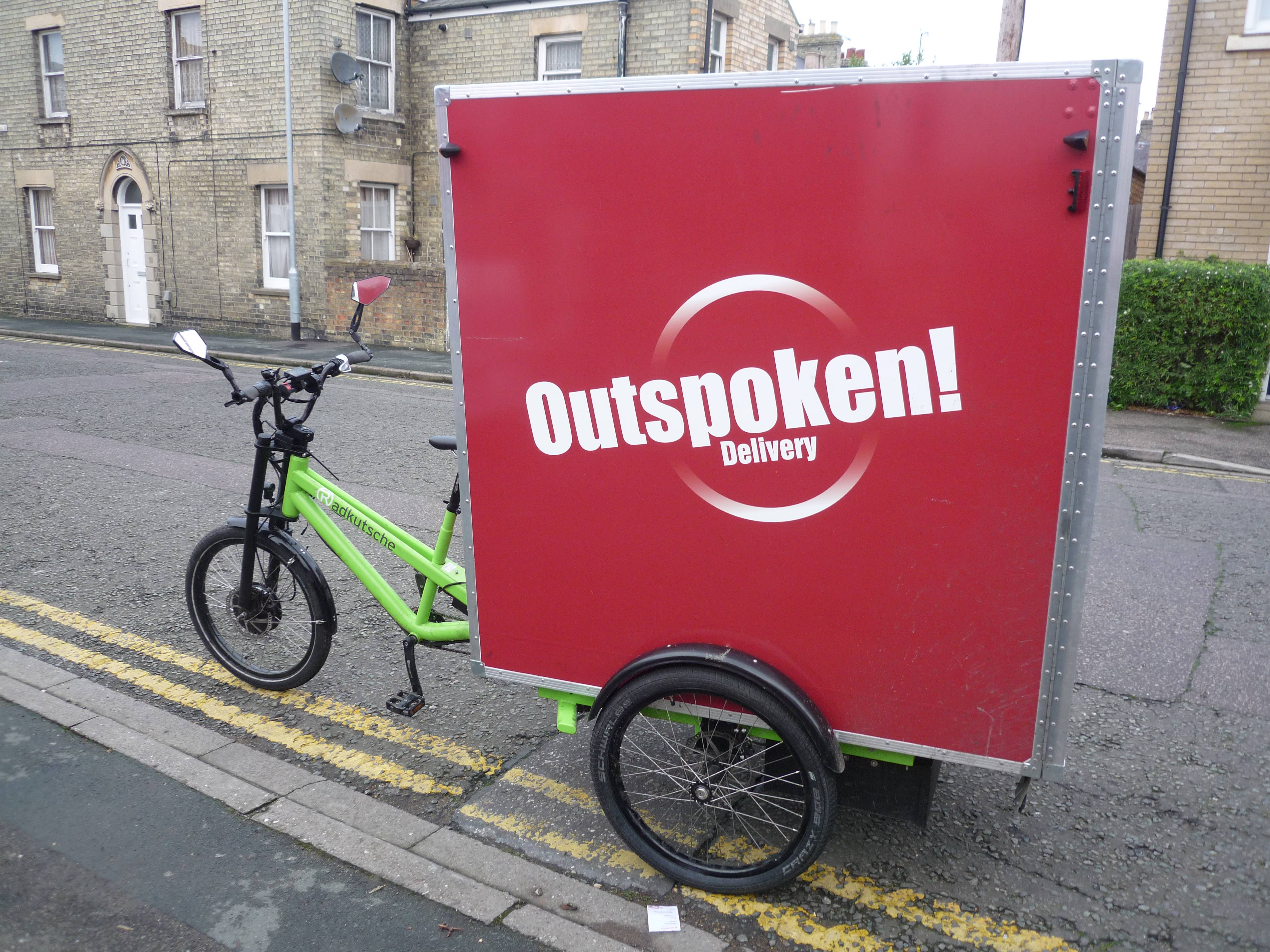 Outspoken Delivery are also partners in an EU funded project CycleLogistics which is all about promoting and demonstrating that cargo bikes and trikes are one of the component solutions to the problems associated with congestion, air-quality and noise in towns and cities.

What services do you offer and are they B2B only or for general public too?

Bikespace: We offer a range of same day services, last mile delivery and contract work. This can range from urgent deliveries for local printers, to delivery of healthy veg bags to clients of Plymouth Community Homes social housing, to bulk drop of magazines to hotels, tourist information offices and leisure venues.

We focus on commercial customers, but do deliver and on occasions collect from residential properties. We recognise that the cargo bike is not the right tool for all logistics needs; it would be rubbish for delivering coal to Newcastle, but it is an innovative and increasingly essential part of the transport mix for city centres that are ill-equipped to deal with the damage caused by motor vehicles to infrastructure and the environment. 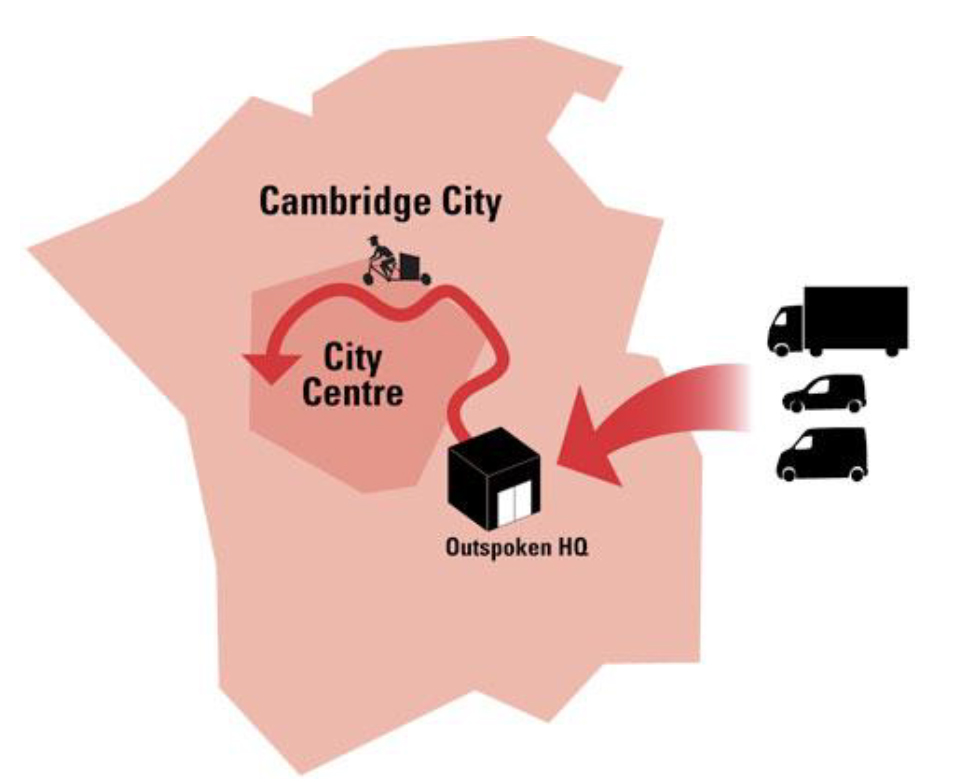 Outspoken Delivery will soon be offering electric assist cargo bikes to members of the public in both Norwich and Cambridge as a result of a government initiative to get electric bikes more widely used.

We currently have 200 local customers in Cambridge as well as undertaking last mile deliveries for a number of logistics companies such as TNT, Parcelforce and Hermes. The company has recently expanded its delivery operations into Glasgow and Norwich.

How can you compete economically with the giants such as Royal Mail, Hermes etc and with motor power in general – especially given the recent tumble in the price of vehicle fuel?

Bikespace: The recent fall in the price of fuel does not seem to have had a corresponding effect on the price of deliveries. In our model, motor vehicles cannot compete on price. Our same day services are up to a third cheaper than the equivalent Parcel Force next day within our service area.

Outspoken: We don’t actually compete with the big logistics giants, in fact we complement them and already work as subcontractors for Royal Mail, Hermes and TNT in dense urban areas where congestion, access and parking make life difficult for them. The last mile can account for up to two-thirds of the cost of delivery and so big delivery companies are always looking for more efficiencies, which is where we come in.

Are there any changes that would help electric cargo bikes succeed even more?  eg New technology or legislative changes?

Bikespace: For commercial users, better integration with tracking, routing and communication software, for the display units would be very useful. It is important that the range keeps increasing. Bosch are leading the way with the introduction of the 500wh battery and this gives us a genuine 40 mile range in hilly Plymouth, which is enough endurance for a day’s use. 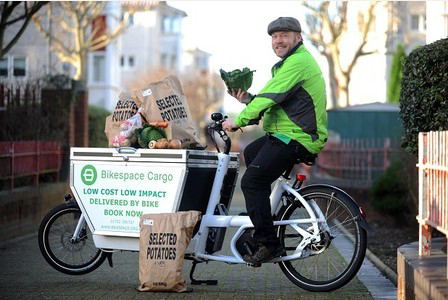 One thing that must improve to encourage all forms of transport and everyday cycling and to make the cycle logistics solution more attractive to business is for local and central government to take the provision of high quality cycle infrastructure seriously and to recognise the huge economic gains that can be made from increased cycle use and reduced motor vehicle use for city centre and short distance journeys.

Serious steps need to be taken to remove motor vehicles from city centres so that people can enjoy a quiet, healthy environment, free from the risk of collision with large fast moving machines. The priority of motor vehicles needs to be reversed and city, town and residential centres need to be designed for people and not machines.

From a legislative point of view, we feel there should be some form of power to weight ratio limits, rather than a blanket 250W limit for Electrically Assisted Pedal Cycles. Current legislation seems framed around the need of conventional single person pedal cycle and while sufficient for that, the 250W limit stifles the potential of cargo bikes in areas of the UK, such as Plymouth, that are not as flat as Cambridge or London.

Outspoken: Cargo bikes and trikes are not yet mainstream and are being developed by only a small cohort of designers and manufacturers. These companies are experimenting with different designs, materials and technologies with the resulting bikes continually evolving as organisations like Outspoken feedback issues as a result of using the equipment in their day to day work. Issues for outspoken include: 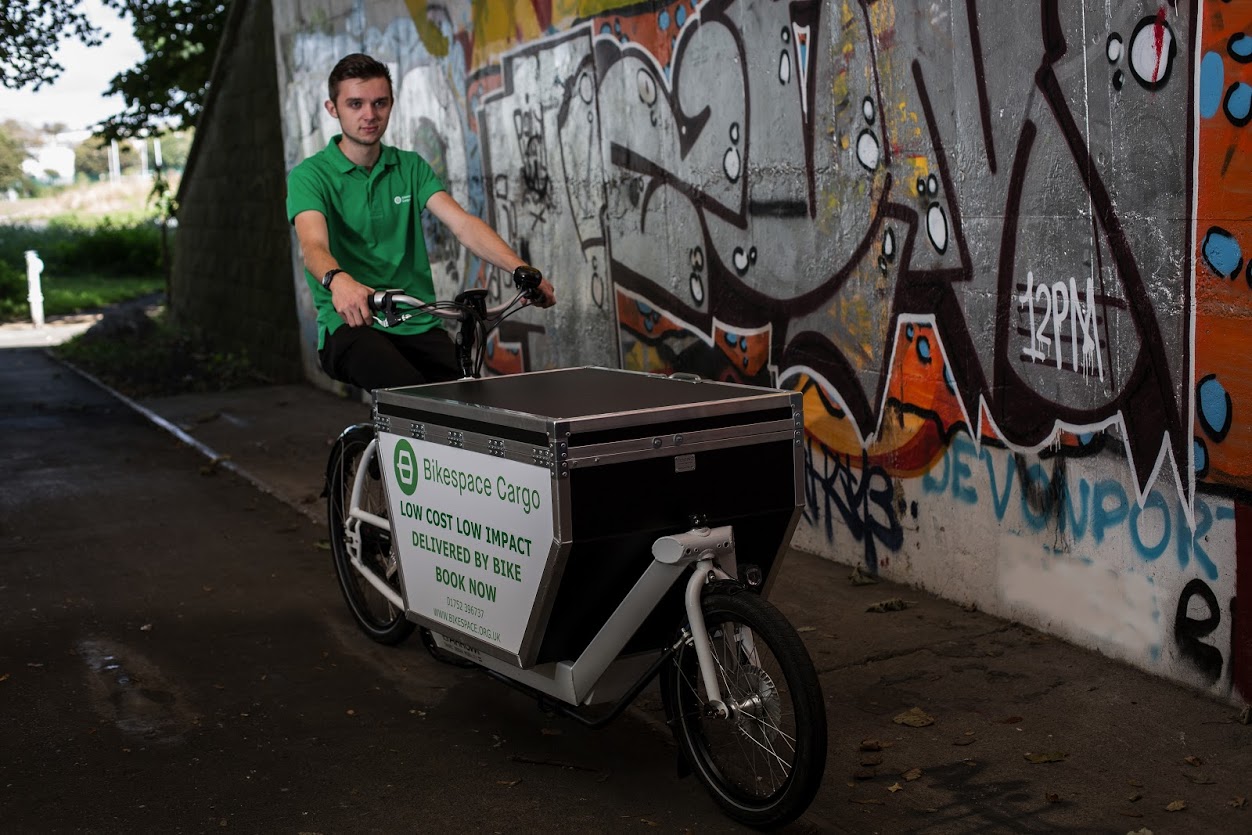