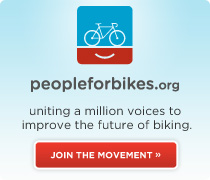 People for Bikes is an organization that is working towards building a massive list of people around the U.S. to show their support of bicycling.

Here are two quotes from the “Our Goals” page on PeopleforBikes.org:

“The goal of peopleforbikes.org is to gather a million names of support, to speak with one powerful voice—to let policy makers, the media and the public know that bicycling is important and should be promoted.”

“Every six years, the federal government allocates billions of dollars to expand and improve our country’s transportation infrastructure. Peopleforbikes.org will use our powerful, united voice to urge U.S Senators and Congressmen to make new, cost-effective investments in bicycling facilities and programs that will benefit us now and well into the future.”

This is an exciting movement that has already recieved many pledges of support and their goal right now is 1 million people.  Hopefully that is just the beginning 🙂

Their website also has an informative page that gives you some statistics on how riding a bike can save you money, reduce your carbon footprint, and improve your health.  The one statistic that I have seen in many places is that the average American spends $8000 a year owning and operating a car.  That is a significant chunk of change!  Just imagine how you could reduce that by riding an electric bike and/or traditional bike.  (I will get into that in a later article)

I think that this is a great way to unite our voices across the United States and let our government know that there are a lot of bicyclists that want to see improvements in bicycling infrastructure.  Please join me and sign the pledge of support for People for Bikes.  And if you have time, please leave a comment below and let the Electric Bike Report community know that you are supporter of People for Bikes.