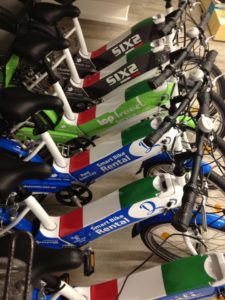 Dolomiti electric bikes for use in Australian sustainable transportation study.

This is a guest post from Daniel Billings of Dolomiti; an electric bike store in Melbourne Australia that is working hard to raise awareness of electric bikes in Australia.

To help spread awareness, we’re giving away 17 brand new SmartBikes worth more than $3000 each.

Well, we’re kind of giving them away. We’re looking for SmartBike Ambassadors to ride them for us.  Yes, you get to keep them 24/7 during the period of the trial.

Here’s how the trial works: Each Ambassador gets a new SmartBike for free. The only obligation is that you ride it at least 35 km per week on your commute to work. As long as you hit your target, you keep the bike for the period of the trial. (We’ll keep track through GPS.)

Some of these custom-designed Dolomiti SmartBikes have been fitted with WiFi, meaning your bike could be a hotspot.  And like all of our pedal-assisted eBikes, they’re powered by batteries (charge them like a laptop) with up to 70 km per charge.

Anyone with a commute to the CBD that’s less than 20 km is invited to apply – even if you’re not an avid cyclist.

Dolomiti is working with Melbourne University (GAMUT: Australasian Centre for the Governance and Management of Urban Transport) and Monash University (Institute of Transport Studies) to collect and process data from what is Australia’s first ever electric bicycle trial.

Over the next 3 years, data from some 200 participants will be used by the Department of Transport and VicRoads to better understand electric bicycle use and its potential to add a significant contribution to the development of sustainable methods of transport. Australia is currently far behind the trends in Europe and Asia, where electric bikes have been widely adopted and now annually outsell regular push-bike sales. 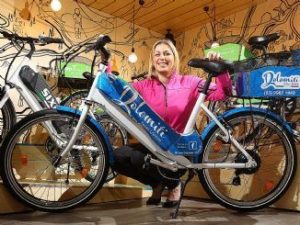 Dolomiti, the electric bike store in Carlton, is also working with The Department of Transport, Vic Roads, Sustainability Victoria and the Melbourne City Council to run this program. The objective is similar to the Electric Vehicle trial that is run by DOT, where we will be collecting data through GPS and behavioural surveys to better understand electric bike use in Australia and at the same time promoting electric bicycles as a sustainable form of transport.

Work is being done to include electric bikes in the current bicycle policy reform process, as previously there has been little or no mention of this mode of transport. This is a major contributing reason for Australia being well behind countries with more progressive sustainable transport policies.

As a leader and innovator in this green industry, Dolomiti has taken it upon ourselves to make a difference by running this trial to promote and educate Australians about electric bikes. The advantages are not only in reducing your carbon footprint, but also the ease with which you can negotiate the traffic to and from work with no parking hassles and the ability to use cycle lanes and tracks. Of course popping out to the shops is also much easier and healthier than getting the car out for that short, petrol consuming run!

The trial will promote electric bikes and, together with our corporate partners, will increase awareness of this alternative form of transport. The bikes are branded with corporate advertising and provided to commuters who are committed to cycling 35kms per week in their commute to and from work. Each bike is fitted with GPS tracking devices to monitor compliance with the program and to ensure that the valuable data is properly captured. Here’s a couple of links which describe the finer details.

What do you think?  Would you be interested in riding a “free” electric bike to help with this kind of a study?  Would you encourage your friends to ride?  Please leave your comments in the section below.