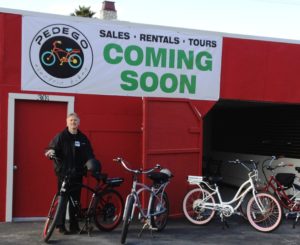 Here is the interview!

Pete: What is your background in the ebike world and how did Pedego start?

Don: In 1999, I was first introduced to electric bikes by a friend of mine who was the CEO for Lee Iacocca’s visionary start-up, EV Global Motors.  Back then, gas was relatively inexpensive and battery technology was not quite ready.  At the time, all the electric bikes were heavy, ugly and unreliable, including the EV Warrior. Conceptually they had an excellent idea but it was a little too early to bring to market.

In 2006 when I lived on the top of a hill, I rediscovered electric bikes and became an engaged consumer by purchasing 7 different electric bikes to ride and share with my friends.  In 2007, I opened a bicycle shop in Newport Beach, California as a hobby, and sold over 500 bikes in my first year, mostly electric.  According to my suppliers, I was the biggest electric bike store in the country.  While I could see a huge opportunity based on customer interest, suppliers at that time were unable and unwilling to offer styles that were appealing to most consumers.  The electric bikes at that time lacked performance and were poorly made. If that weren’t enough, the suppliers offered no after sales support to dealers or customers.

In late 2008, I sold my interest in a very successful chemical and car wash company I had started and decided to focus on designing and marketing electric bikes.  I asked a long-time friend and business partner in another venture to join me. Our goal then, the same as it is now, is to be the best electric bicycle company, not the biggest.  Initially, we focused all of our energies on the design.  Once complete, we then went to work on specifying every single component from the kickstand on up. We began offering our first Pedegos in mid-2009.  The Pedego name comes from the “Ped” in pedal, the “e” in electric and then those two together make you “go”!

Pete: Give us a little background on each of the Pedego bikes and how they are unique: The Classic Cruiser, Interceptor & Tandem. 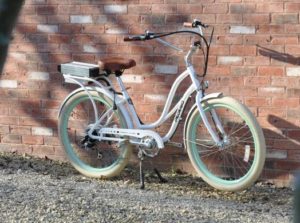 Don: We began with just two simple designs but took the extra step of having a professional designer from an automobile and motorcycle discipline create our Classic and Step-Thru Comfort Cruisers.  We guided him towards creating stylish retro beach cruisers, but updated to be comfortable and have a fully upright riding position.  We discovered that the critical points for rider comfort were the handlebar position and grip, the seat and the pedal position.  With painstaking detail, we researched and specified every single component on both models using brand named products on all the critical components.  It was also very important to us that these first Pedegos were designed to be electric bikes, not merely ordinary pedal bikes modified to be electric.  For example, the rack that holds the battery is integrated as part of the frame.   Also, while it is obviously important to go, we think it is even more important to be able to stop!  Our braking systems, which include front disk brakes, are engineered for electric bikes since they will be traveling at faster speeds.

The most popular Pedego is the Interceptor which is energized by a 48-volt power system.  It was originally designed for the Los Angeles Police Department but has turned out to be a huge success with larger folks who need a little more power to climb hills.  When we began, the industry standards were 24-volt systems, which were severely underpowered for the U.S. market.  We led the industry change to 36-volt systems.   For heavier riders, 48-volt systems are the only way to go.   The same 48-volt system also system powers the world’s first and only electric tandem which has surprised us with its growing popularity.

One of the critical factors to the wide ranging consumer acceptance is our wide choice of colors and options available.  We offer over 100 different model, color and option combinations.  This is easily accomplished because every Pedego is built to order in our Irvine, California facility.

Pete: Can you tell us about any new Pedego electric bikes in the works right now?

Don: While our cruisers have been wildly successful, we have been developing several new products that will be rolling out over the course of 2012 beginning in March.  Our 3 wheeled Pedego Trifecta will be out in March and it is sure to be a category killer.  It has been engineered with a rear mounted differential, allowing for safe turning at all speeds.  It is both stylish and very functional with lots of integrated cargo capacity. In April, a more traditionally styled Pedego Commuter Series will be available in both 36-volt and 48-volt systems with an entirely new drive system for optimum hill climbing performance.  In May, we will be rolling out a super cool Pedego Monster with 4 inch wide tires for riding on sandy beaches and off road trails.  Finally, in June, the Pedego Super Cruiser, designed by Tony Ellsworth, will become available.

Pete: Tell us about the Pedego Owners Group rides you host in Southern California.; they sound like fun! 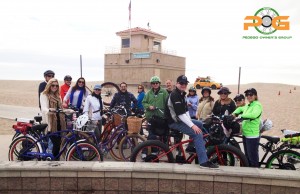 Don: We started POG (Pedego Owners Group) a little over a year ago and had our first group ride last February.  Since then, we have monthly rides and will be going to weekly rides every Saturday morning starting in April.  Our most recent ride last month was along the coast from Redondo Beach up to Playa del Rey.  We all enjoyed some appetizers and drinks after the 2 hour ride at an oceanfront restaurant.  Last July 3rd, we hosted a POG Independence Day party at the Huntington Beach State Park with about 50 Pedego owners.  We are already planning to do it again this July and expect many more Pedego owners to attend.

Pedego owners are a great group and we use these events to get to know our customers better and learn what they like and don’t like about their Pedegos.  Fortunately, the “don’t like” list is very short!  It turns out that the folks who ride Pedegos are the nicest people and very fun to hang with.  We expect to open POG chapters in many other places soon.

Pete: We see a lot of Pedegos in the US and now we are beginning to see more around the world. What countries are you focused on and how is the international scene going for Pedego?

Don: Our goal when we started Pedego was to focus on the U.S. exclusively, and we have had great success because of all the dealers that now carry Pedegos.  We have discovered that test riding a Pedego is critical to purchasing one, so establishing a national network of dealers has helped us tremendously stateside.  Because of the internet, the world has become a very small place and apparently, people all over the world want a California styled electric beach cruiser.  We receive international inquiries on a daily basis and have established distributors in Canada, Europe, Columbia, Brazil, Australia and New Zealand.  These distributors are serving Pedego dealers in many other countries including England, Switzerland, Germany, Spain, Norway and France.

Pete: You have a promotion going on right now to give away 2 Pedegos and other e-bike gear from Nutcase Helmets & Light and Motion lights.  What is the basis for the promotion and how can people sign up?

Don: The objective for our latest promotion is to assist our dealers by sending them customers that are interested in our bikes.  We have discovered that our customer base is wildly excited about their experiences riding their Pedegos, and love to tell others about it.   Fortunately, the social media tools that are now popular with so many folks are ideal for helping spread the word.  The contest is all about giving away free stuff that’s bike related and cool.  We talked to our dealers and found out that Nutcase Helmets, PoCampo bags and Light & Motion lights are the hot accessories for Pedegos so we worked with them to offer weekly giveaways on Facebook.  At the end of the contest, we will be awarding a Pedego Comfort Cruiser Balloon Series to the winner and one for the winner’s friend because it’s even more fun to ride a Pedego with a friend.   Entering can be done at www.pedegoelectricbikes.com or clicking on the link below:

Pete: Finally, do you have any tips for people just getting into electric bikes?

Don: The first tip I can offer is DO IT!  Electric bikes are great way to have fun as often you desire.  Beyond the initial investment of getting one, it’s pretty much free fun since it costs about a nickel to charge it.  Most Pedego owners will tell you that they ride their Pedego primarily for fun but many also report that they use it for transportation, to save money, to get exercise, to lose weight and even reduce stress.  The freedom of riding with the added comfort and convenience of power on-demand will allow riders to see a whole other world by exploring bike paths that are not obvious unless they are looking for them.

Like any other product or service, you get what you pay for, so shop smart.  Buying an inexpensive electric bike will probably not give you anywhere near the same enjoyment that a well-engineered electric bike would.  Reliability, service and parts availability should also be considered.

For maximum enjoyment and comfort, select an electric bike with an upright riding position so most of your weight rests on the seat.  A wide seat with plush padding will make riding comfortable and enjoyable.

For those who might think of an electric bike as cheating, consider that not everyone has the energy and stamina to ride a pedal only bike in a competitive lean-forward riding position.  The creation of some power assistance to overcome hills and winds has made it likely for millions of consumers who would not likely ride, let alone purchase, another bicycle in their lifetime.

Finally, be sure to do your homework by researching the brands you are considering before purchasing any electric bike.  In our case, we use an independent third party service called Customer Lobby to field customer comments.   https://www.customerlobby.com/reviews/9941/pedego-electric-bikes/

End of the interview with Don DiCostanzo

Do you have any questions for Don?  Please leave them in the comments section below.