But looks can be deceiving.

Though the new model shares the same classic Gocycle styling and still folds up the same way, the new G4 (which stands for generation four) sports a redesigned motor, electronic shifting, a carbon fiber midframe and a number of other notable new bits that make the new bike remarkably lighter and more powerful.

Electric Bike Report caught up with Gocycle during the Big Gear Show in Park City, Utah this past August and got to spend some time on the mid-range Gocycle G4i and the ultra-lux Gocycle G4i+, two of the three models released in the new Gocycle G4 lineup. Though the big mountain passes of Park City probably aren’t the G4’s typical natural habitat — light folding bikes are more typically found in urban commuting environments — the little bikes performed incredibly well on long climbs and during tight, switchback-y descents. 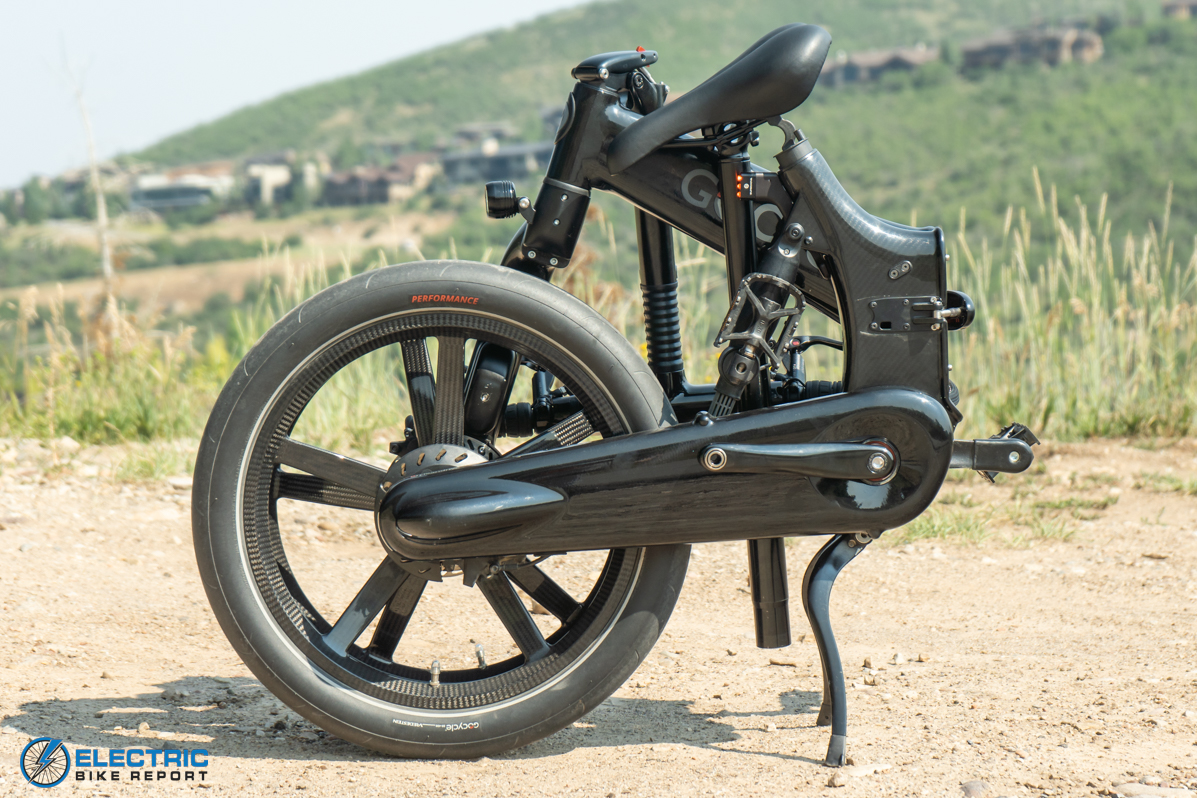 The Gocycle is one of the lightest fast-folding electric bikes we’ve tested.

Gocycle released the new G4 lineup this past March with a promise that the new bike represented “a new standard for performance” in the portable electric bike category. We’ve reviewed the previous version of the Gocycle, the GX, and can attest that they’ve raised the bar for what you can expect from a compact electric folding bike.

The Gocycle G4 series is built around the all-new G4drive motor, a proprietary front hub motor that promises twice the torque of its predecessor.

We coincidentally had the previous GX model with us in Park City to use as a portable get-around bike from our hotel to the venue, so we actually got to ride the previous version of the bike and the new G4 back-to-back. It was seriously impressive how much quicker the G4 is over the GX, especially on hills. Don’t get me wrong, the GX is a great bike that’s incredibly fun and fast, but the new motor is noticeably more torquey and spins up to speed quicker.

All three models of the G4 — the base model G4, mid-level G4i and the top-of-the-line G4i+ — are all Class 2 e-bikes, meaning they have a throttle and pedal assistance up to 20 mph. The throttle on the previous model of the Gocycle was a discreet but ergonomically convenient button located underneath the left-hand grip, but that’s now been changed to a small twist-type throttle. 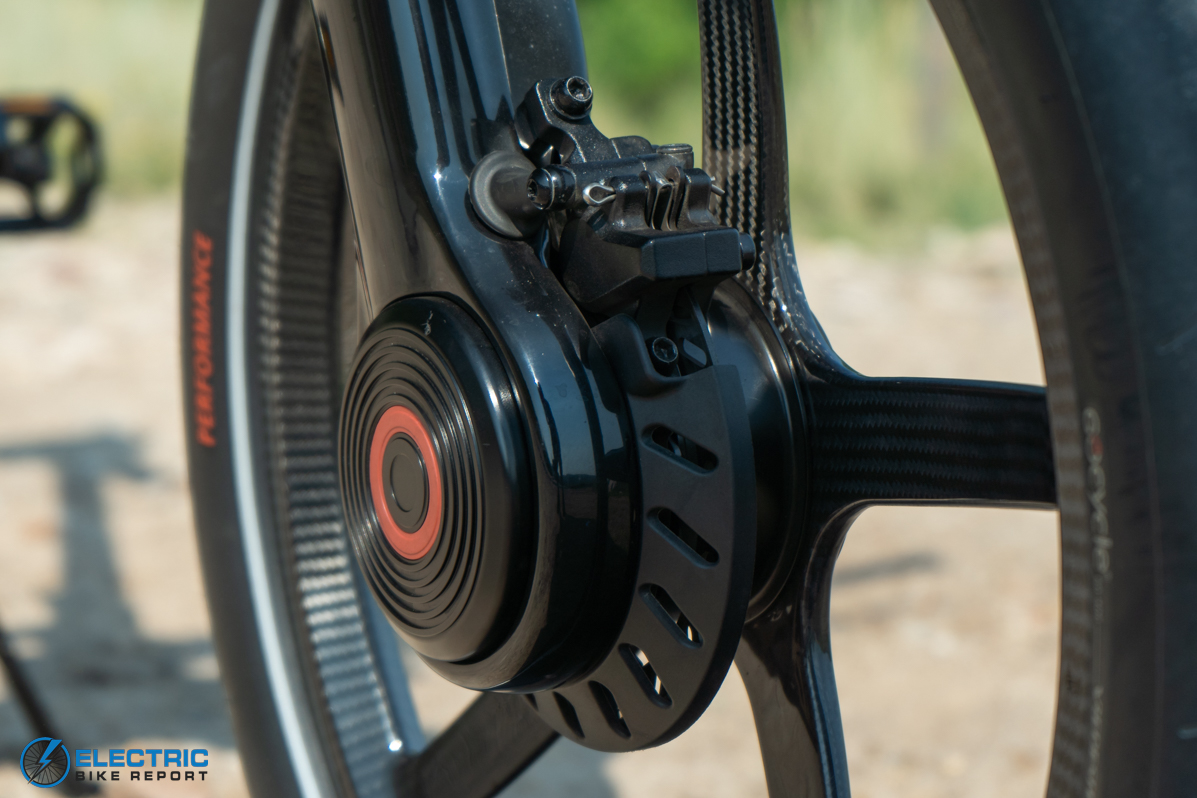 Gocycle loaned us two models of the G4 to test in Park City, the G4i and G4i+, with the only real differences between the two being color options and these extremely cool carbon fiber wheels that come on the G4i+. Not only do those wheels save weight, they also stiffen up the bike and make it handle more precisely in hard corners. It’s not a humongous difference, but the G4i+ felt like it had more spice in the corners and had a little more power on the climbs — a worthy upgrade for someone looking for extra performance and some additional bling.

For such a small bike, it really is impressive how well it rides. Folding bikes typically come with some sort of a catch: Maybe they’re a little flexy in corners or underpowered on hills, or maybe they’re just flat-out uncomfortable on longer rides. None of that was true with the Gocycle. It truly is a well-rounded bicycle that also happens to fold up real small. 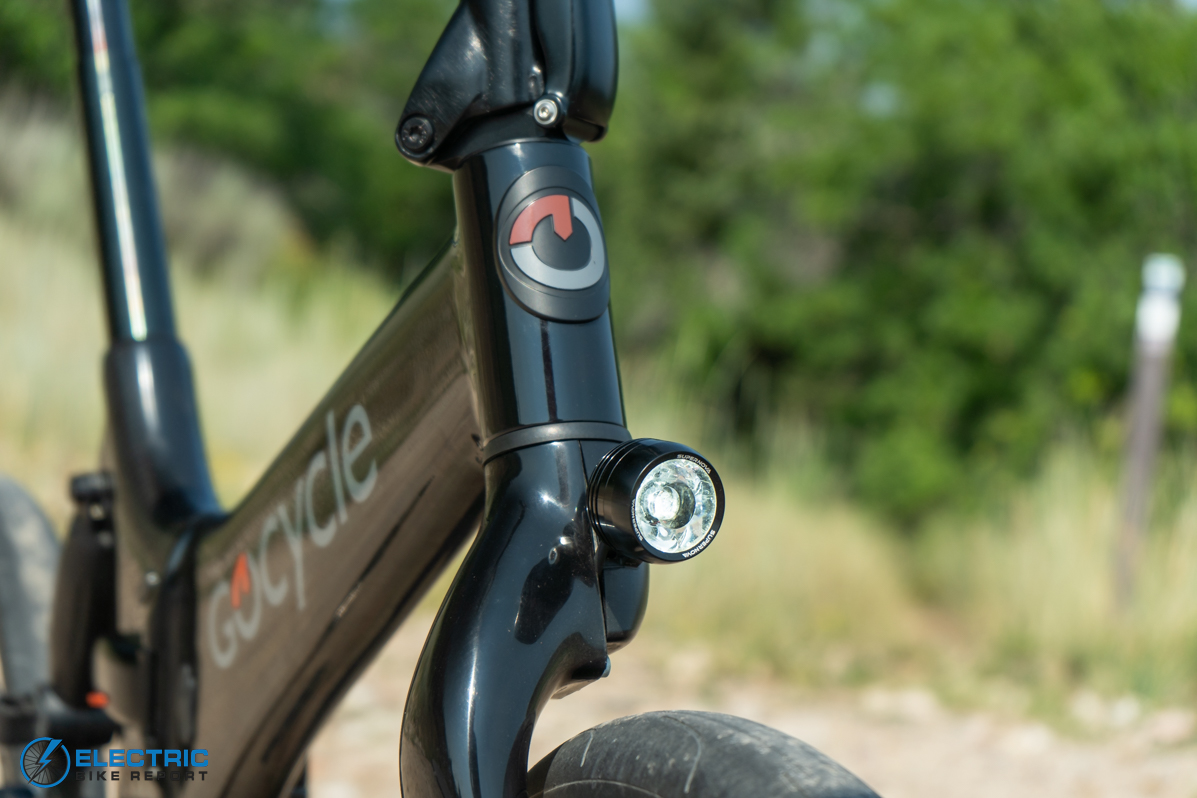 The new Gocycle G4i+, but from the front.

Gocycle’s proprietary front hub motor is small but mighty, touting twice the torque over the previous generation. The company does not publish the motor’s wattage, but the previous version of the Gocycle we tested last year produced 500W in the U.S. and 250W in the U.K. We’d expect the current motor to match that but with double the torque. To put it short, the new G4drive does not leave one wanting for power. It’s remarkably quick for such a compact package.

Powering that motor is a quick-charging integrated lithium-ion battery that can be removed from the frame. We haven’t gotten to conduct our usual range tests on the G4, but Gocycle claims the battery will last up to 40 miles on the base G4 model and 50 miles for the G4i.

All three models of the G4 come with a 3-speed Shimano Nexus internally geared hub that I’m told was custom built to fit Gocycle’s tight tolerances, which is a big deal — Shimano doesn’t custom make its parts for just any old company.

But while the base-model G4 gets a mechanical twist shifter, the G4i and G4i+ we tested in Park City actually have predictive electronic shifting. It’s still a twist shifter located on the right-hand grip, but all it takes is an effortless flick of the wrist forward or back to get the bike to smoothly change gears while riding. The G4i and G4i+ will also automatically downshift to first gear when the bike comes to a stop (the “predictive” part of the shifting), meaning you never have to fumble your gears at a stop sign.

This feature actually took some getting used to for me: I’m a long-time cyclist so I’m used to intuitively shifting into the gear I want at stops, so I was sometimes caught off guard when I started rolling again and found myself in an easier gear than expected, but I got used to it quickly. It is a feature that will be ultra useful for those still getting used to gear changes at stops or who just don’t want to think about it. 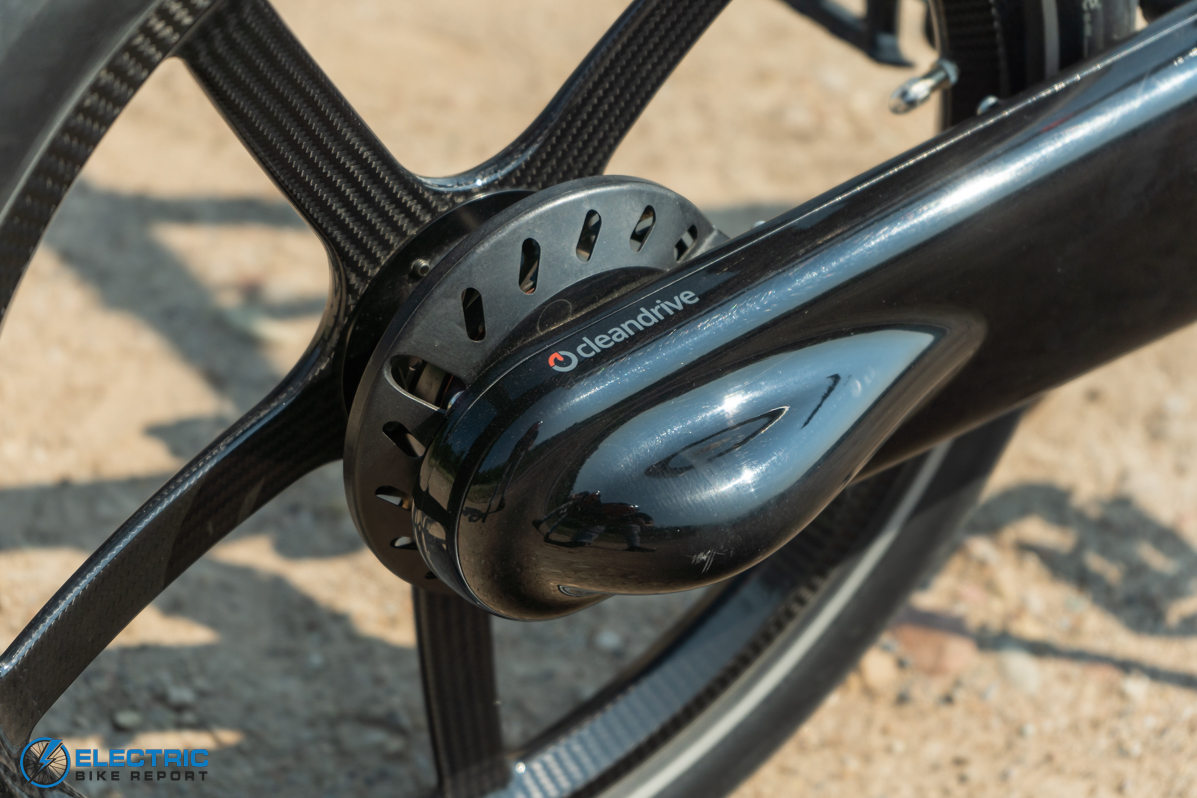 Gocycle’s patented cleandrive seals the drivetrain away from pant legs. This photo is of the G4i+ model, so you can see the carbon fiber spoked wheels.

Gocycle spec’s the G4i and G4i+ with a set of hydraulic disc brakes front and rear. These brakes are unbranded and proprietary to Gocycle, though the levers bear a striking resemblance to a Magura design.

Whoever made them, they stood up fine on the long descents we encountered in Park City. Descents that large typically require so much braking that lesser systems will heat up and begin to lose power, a phenomena known as “brake fade.” But not these brakes, they handled high speeds fine and inspired enough confidence that I found myself braking later and carrying more speed into corners.

Gocycle makes a host of proprietary accessories for its folding bikes, but the models we tested were some of their more spartan examples with just the G4i+ featuring some neat integrated front and rear lights.

But Gocycle doesn’t build bikes built for hauling loads or additional passengers, it builds folding human-powered sportscars. So while these bikes were lacking stock racks and fenders, they were chock full of new features designed to maximize performance and cut weight. The most notable of these improvements are a new carbon fiber mid frame, a new carbon front fork and some cool Moto GP-inspired tires.

Those new carbon bits cut several pounds off the overall weight of the bike, a very important consideration when you remember that these bikes are designed to be folded up and toted around like a briefcase. They also stiffened up the Gocycle’s frame, making the bike more lively and precise. On the high-end model, the G4i+, you also get those insanely cool carbon fiber wheels that further save weight and increase performance. 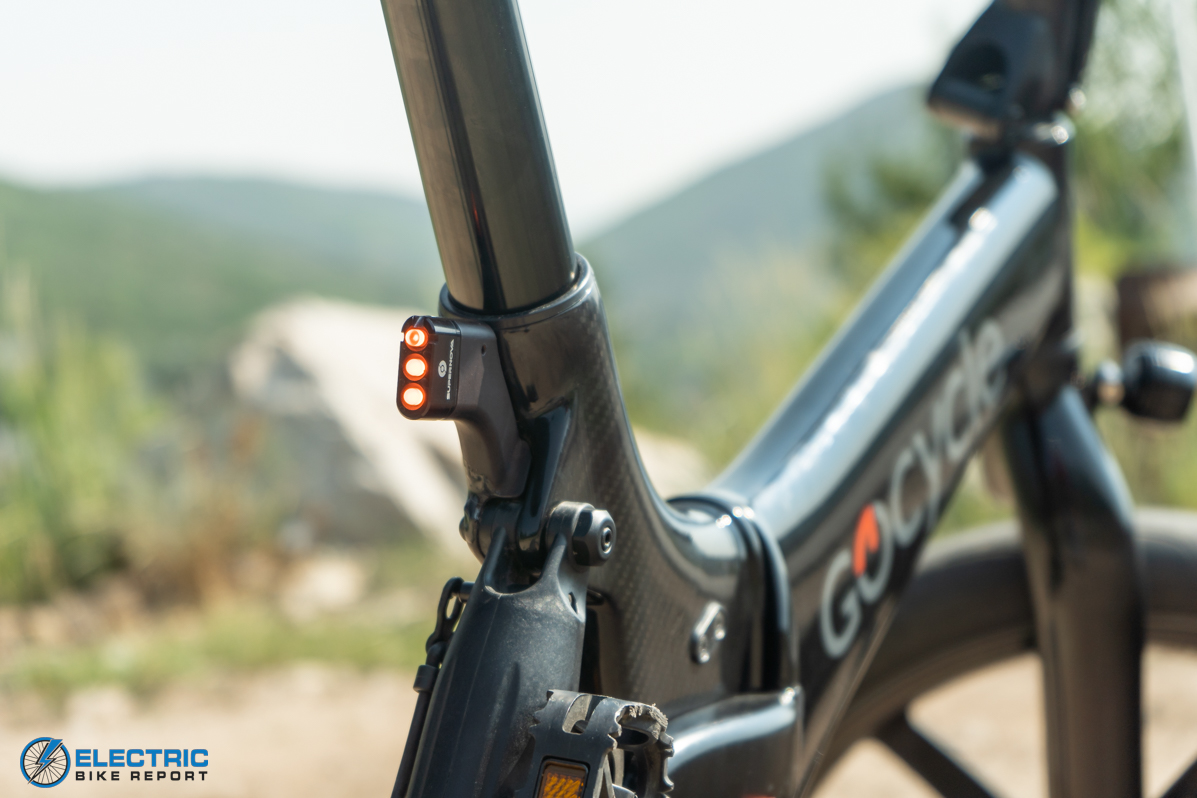 The small but mighty LED rear light on the Gocycle G4i+.

Rounding out the new features on the G4 lineup are a new set of Moto GP-inspired tires made special for Gocycle. These tires gripped like they had additional gravity and held up well on the less-than-ideal road surfaces we encountered in some areas of Park City.

Richard Thorpe, the man who started Gocycle, used to be a designer for U.K. supercar manufacturer McLaren before he left that gig to build electric bikes.

His touch, and more specifically his background designing some of the coolest and most cutting-edge supercars on the planet, is all over the Gocycle G4 lineup. The folding frame is sleek, shaped like no other bike on the market and strategically employs innovative materials like carbon fiber and magnesium to fine-tune the G4’s ride. But nowhere else is the automotive inspiration more evident than in the all-new G4drive. Even after spending hands-on time with the bike, I’m struggling to understand how they squeezed that much torque out of such a small motor. I tested a total of 13 bikes during the Big Gear Show in Park City, and this bike climbed and accelerated with the best of them.

The base-model G4 has yet to arrive on U.S. shores, so I can’t speak to its performance. But the two we did ride — the G4i and G4i+ — were remarkably quick, feeling more like a slimmed-down sportscar than folding bike. Those two models are very similar aside from the carbon wheels on the G4i+, but, if you can afford the upgrade, I’d highly suggest popping for those wheels. Not only do they just ooze high-tech cool, they actually do improve the bike’s performance uphill and in corners.

Gocycle sells the G4 lineup of folding e-bikes on its website and will ship the bike direct to your doorstep. Or, if you prefer an in-person shopping experience, you can buy the G4 through a brick and mortar dealership.