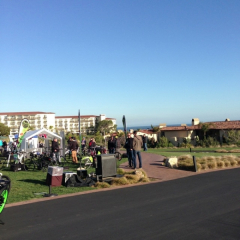 In 2012, the budget for the U.S. Department of Transportation was over $122 billion, with a paltry $6 billion allocated to cycling. Very often the barriers to cycling as transportation are due to poor infrastructure and have the cumulative effect of reducing a glorious mode of transportation into just another sport.

And while sport is all fine and good, it also skews the market: it wasn’t long ago that if you went into a bike shop and told them you wanted a commuter bike they would look at you like you were crazy. You want to ride with cars?

So now we have something called an electric bicycle, a technology that is revolutionizing the way people move themselves everyday all over the world. Could this be the answer to the American car culture cul-de-sac?

Could this technology not only liberate us to explore our neighborhoods, cities and environs on a human scale as opposed to driving by in a metal box, but also free our paychecks by giving us financial independence from our automobiles and vastly reduce our ecological footprint? Will technology lead the way? 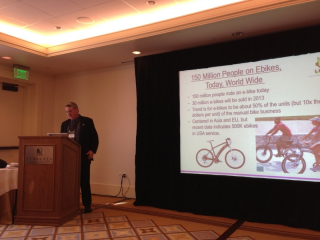 Enter the Interbike Electric Bike Media Event held in Palos Verdes, California February 13, 2013. Put on by the folks at Interbike – organizers of North America’s largest bicycle convention – and hosted by nine manufacturers, the media event was the first major showcase of electric bicycle technology for the cultural arbiters of this nation.

For the inaugural year, an impressive roster of big publishers were present, representing a hefty circulation of 18 million – USA Today, Men’s Journal, Bicycling Magazine, US Magazine, and O Magazine to name a few. Almost just as important, the gathering was a clear signal that the cycling industry was ready to accept electric bicycles as their own. 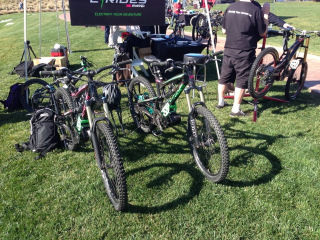 The mood at the reception the night before the affair was cautiously optimistic, and a mix of nostalgia and innovation swirled around the room. Among industry veterans there was talk about the beginning of the mountain bike boom: in the early days “manufacturers didn’t understand what we were doing, they didn’t understand what this freeriding thing was,” a rep from Kranked E-Bikes explained  about his experience in the early days of freeride mountain biking.

The electric bike movement, though, seems somewhat different: you can’t just refurbish a classic Schwinn and bomb down hills. To attain a suitable level of reliability and practicality, sophisticated technology is key, and it requires lots of time and investment to get right.  So, this time the manufacturers are driving the industry forward, hoping to get the public to give their bikes a try.

All those in attendance understood that they were all gathered together to help nudge America toward a test ride.

Before getting started on test rides, we were fed, caffeinated and educated on the history and possibilities of the electric bicycle by the publisher of EVWorld.com, Bill Moore.

I sat next to a reporter for Bicycling Magazine, a publication he described to me as all about spandex but looking to branch out. This was the right place for fresh ideas and lifestyles around cycling. 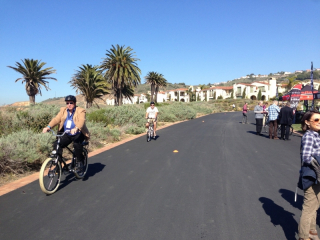 Soon we were out on the test track and riding bikes. I watched as the quintessential Men’s Magazine reporter – a slight, sophisticatedly dressed man with a self confident full beard – took his maiden voyage on an electric bike, ripping up a hill on a Kranked E-Bike sporting a 1200 Watt E-Go mid-motor integrated onto a carbon full suspension Santa Cruz downhill bike. “This would fit the bill for our readers,” he remarked to me as I met him at the bottom of the hill on a fast three wheeled bike from Pedego.

The bike he was riding was the first electric bike he had ever tried, and like so many other first time test riders, he was truly impressed. I couldn’t help but think how exciting it was that finally the industry was able to provide a range of electric bicycles that were able to catch the imagination of taste makers like the people at Men’s Magazine. 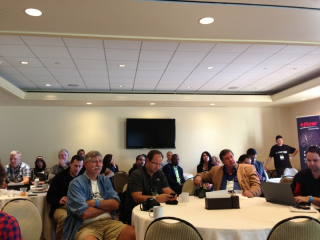 It was at lunch, back on the veranda where we had enjoyed breakfast, that the event took an unexpected turn. We sat down for a presentation by Bruno Maier, the VP of Bikes Belong, the leading national bicycle advocacy organization in the country.

In his presentation, Mr. Maier spoke not about electric bicycles specifically, but about cycling advocacy generally. His point was simple: bikes are good culturally, environmentally, psychologically, physiologically and economically, and it is going to take public policy and advocacy to give the cycling industry, and by extension the electric bicycle industry, wings. 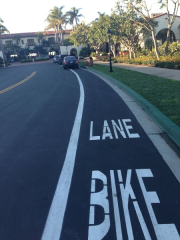 The point was well taken. It is widely understood that Europeans embraced ebikes because they improved upon a mode of transport that was already the best way to get around. The Netherlands, flat as a pancake, is the number one market for electric bicycles in Europe not because they need the technology for hills but because electric bikes make it easier for more people to use the infrastructure already available.

Back in Palos Verdes, the day had been spent talking about incredible technology, but Mr. Maier refocused the conversation on a larger issue: that technology is only as good as the bike networks available. You could go back and fourth about what comes first, the ebike or the infrastructure, but the wonderful thing that Interbike did by including Bikes Belong was that they made the event much more than just a day to try some new high tech toys; they helped bring to the foreground the ethical backbone of the cycling and e-cycling industry, underscoring that the adoption of the electric bicycle is a political and social undertaking, not only a matter of personal consumption.

Interbike’s Electric Bike Media Event did something remarkable this week: it didn’t just show off great technology; it also framed the electric bicycle movement as a key component in the fight for human scale transportation.

For us, the early adopters of these amazingly efficient human/electric vehicles, it presented a call to action: to contact our local representatives to tell them how we use bicycle infrastructure not only on the weekends but every day and to proudly advocate for electric bike technology.

At the end of the day, improving society is what is at the heart of the daily bicycling movement, and as long as we dream big, and we bring Men’s Magazine along to dream big with us, we will find success.

The electric bicycle is here, it’s fun, and it’s going to make America a better place.

Here are more video interviews from the event:

Thanks to Brett Thurber from The New Wheel e-bike store in San Francisco California for the coverage of the Interbike Electric Bike Media Event!