What Are Gecko Puncture Proof Tires?

Having a puncture can be a total nightmare; you might find yourself stuck in unpleasant weather attempting the fix, or discover your particular type of tyre are one of those hard to get off the rim ones, or find that that you thought you had removed the object causing the puncture only to discover that the tire goes down again immediately after ‘fixing’. Or a whole host of other problems…if only there were a truly puncture-proof tyre…

In fact so-called puncture proof tyres have been around a while. We aren’t talking the ones with kevlar and other types of reinforcement that are still in essence pneumatic and can still suffer punctures from very sharp and sizeable objects. Truly puncture-proof tyres are one-piece construction and have no inner tube but rather are a ‘solid’ tyre, though ‘solid’ can be something of a misnomer, as we discover later.

But product launches of ‘solid’ tyres over the years have come and gone and reviews of them in the cycling press have been almost universally critical. They were found to be extremely harsh to ride and at worst potentially dangerous because of issues such as derimming and skidding. At best they were hard to ride with huge rolling resistance and a jarring, uncomfortable ride. 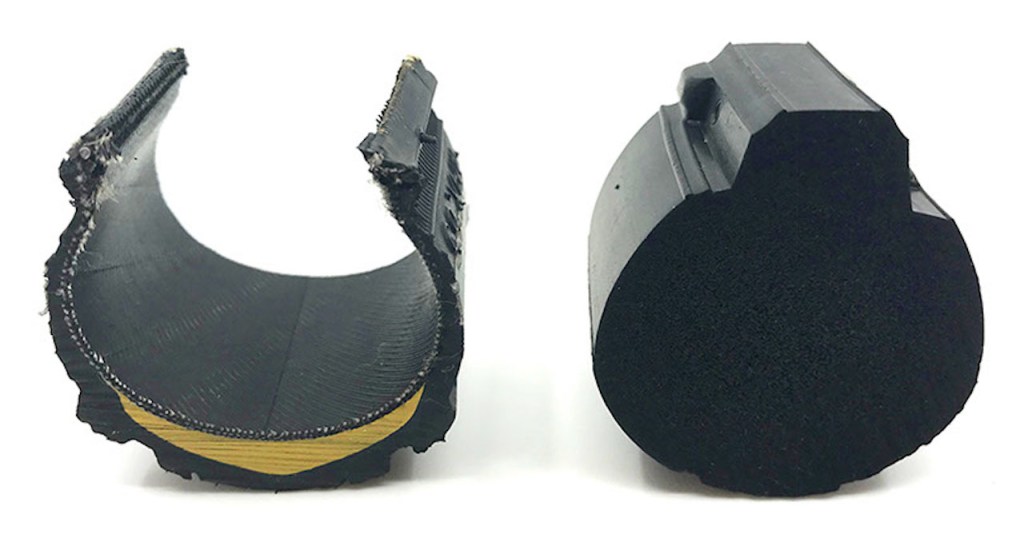 Gecko tyres replace the puncturable air space in a pneumatic tyre with a unique cellular – and totally unpunctureable – form of rubber.

Enter Gecko’s cellular tyres. Manufactured in the UK and the brainchild of rubber scientist Richard Adams, they are described as ‘cellular’ rather than solid, meaning that, whilst they are contain no pneumatic air chamber that can be punctured, they do contain air mixed in with a special rubber compound to give the tires some ‘give’ and to reduce weight. But stick a nail straight into them and it has no effect as there is nothing to puncture.
The cellular rubber compound is based on traditional thermoset rubber compounds similar to those being used in conventional pneumatic tyres. The Gecko is the product of over 35 years industry experience and is a patented technology.

EBR has tested a number of different versions of Gecko’s tires over a lengthy period of time including the latest fastest, free-est rolling ones and have generally been very impressed. Here’s a summary of our various test results; each of the tires Gecko produce is a different size and uses a different mix of rubber compound and so may suit different riders.

EBR’s initial test riding on 26″ tyres found that, whilst ride quality and rolling resistance may not be up there with pneumatics, they are clearly here to stay and e-bikes were an ideal recipient for them as the extra power from the motor means extra rolling resistance is much less noticeable.  Cornering at speed on all manner of surfaces felt safe and though the tires were noticeably harsher than pneumatics that aspect certainly wasn’t too off-putting. 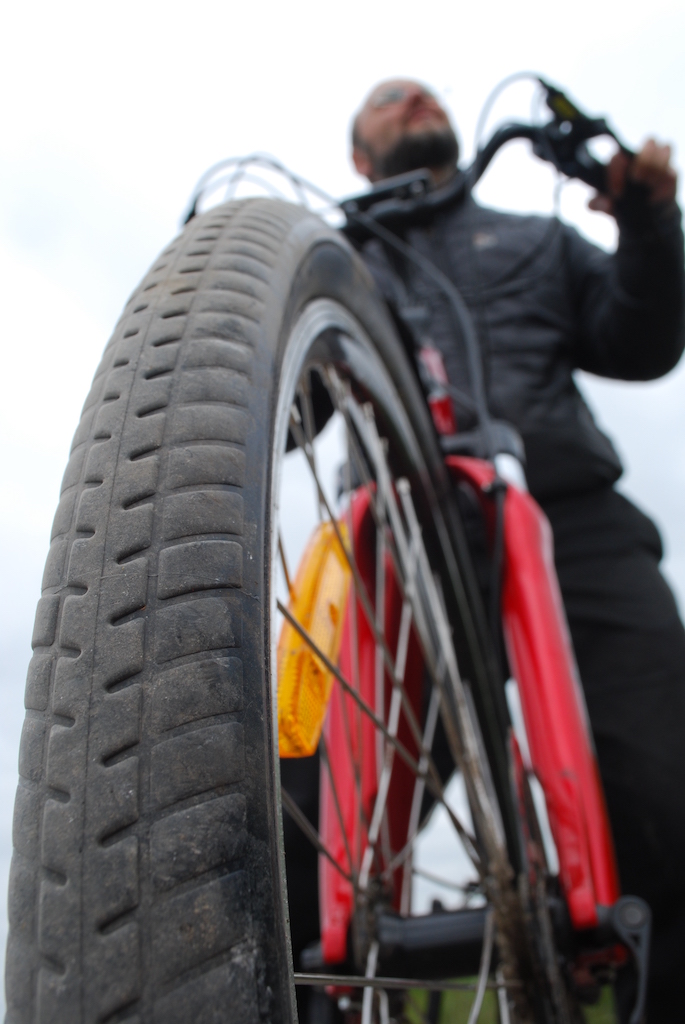 One of Gecko’s early 26″ cellular tires

A second version of the 26″ tires were billed as ‘comfort’ tires with a deliberately wider profile and a softer compound. These were noticeably less harsh and road holding and bike handling didn’t feel an awful lot different to pneumatics  – only when you hit a really big pothole or kerb was there a big difference.  The softer compound needed a little more power to overcome resistance but with the e-bike power set to full the bike still performed well, climbing hills with ease.

These Comfort tyres have been on long term test on an e-bike for several thousand miles and have performed pretty faultlessly. Whilst there has been much greater wear on the rear tyre than the front to the point where the tread pattern and outer casing has worn away this actually doesn’t seem to have affected performance at all noticeably and the cellular ‘core’ of the tyre keeps on performing well and giving grip in all conditions.

Initial power consumption for the first 26″ tires tested was around 20-30 Wh per mile depending on rider and terrain, though the Freego hub motor-powered test bike was maybe not the most efficient model and these figures could well improve on a crank drive. Gecko say their own tests on a more efficient e-bike on these particular tires meant only a 15% reduction on battery range; with today’s bigger batteries on e-bikes you would still have a very reasonable range using Geckos. 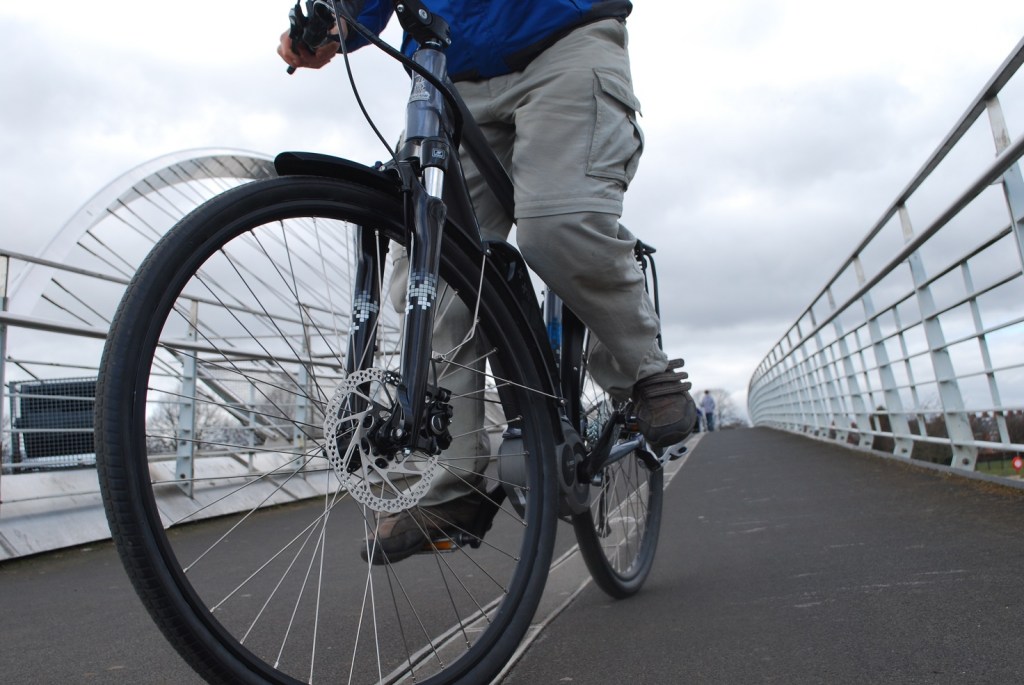 The innovation continued with larger 700 x 40 tyres, larger tyres themselves being more efficient and free-rolling than smaller ones and made with a harder Regular compound instead of the previous Comfort compound. They certainly proved freer-rolling than the Comfort versions as in repeated roll down tests the Regular tyres came out ahead each time. 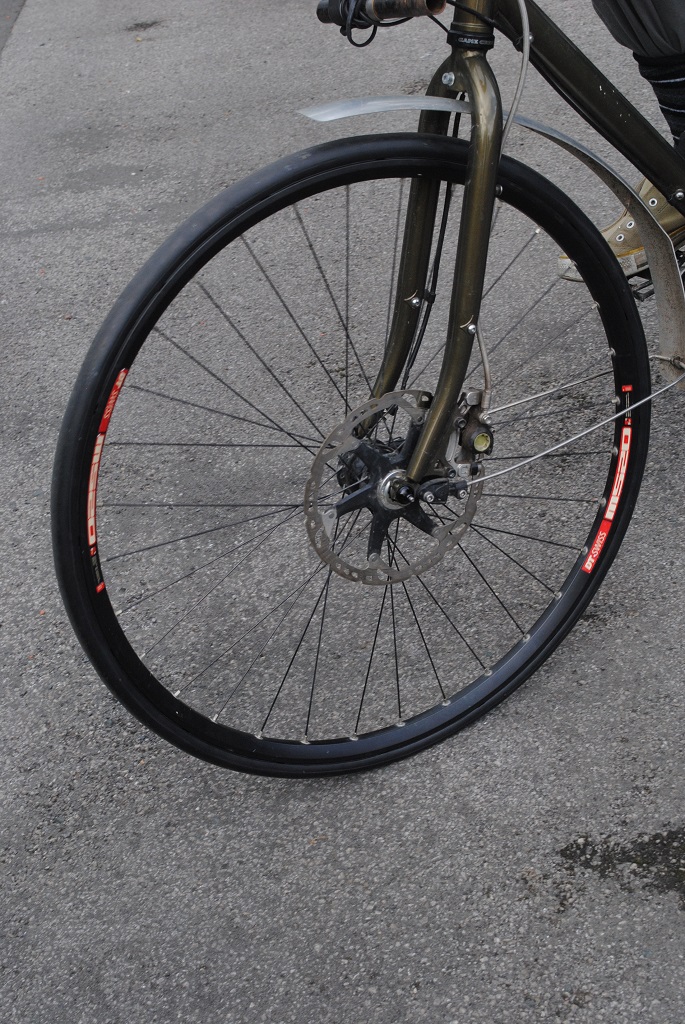 Finally we tried the recently released, narrow profile 700 x 27 tyres and found these the freest rolling yet and certainly a huge improvement on previous versions. They were the best blend of speed and comfort – not as comfortable as the Comfort versions but certainly an improvement on the Regular model and only a little slower than pneumatics, especially in comparison with earlier models.

They were actually tested on a non-electric bike as we were keen to see just how fast they were without electric assist. They were perfectly usable for shorter trips around town with plenty of grip cornering and good, stable handling characteristics.

The weight of the larger tyres is around 1.5kg but the 700 x 27 ‘skinnies’ weighed in at less than half that at 730g per tyre, no doubt a major factor in their free-rolling and nimble-handling properties.

There are a number of advantages to Gecko technology apart from the obvious one of never having to worry about punctures or carry a spare tube, tyre levers and pump around with you. 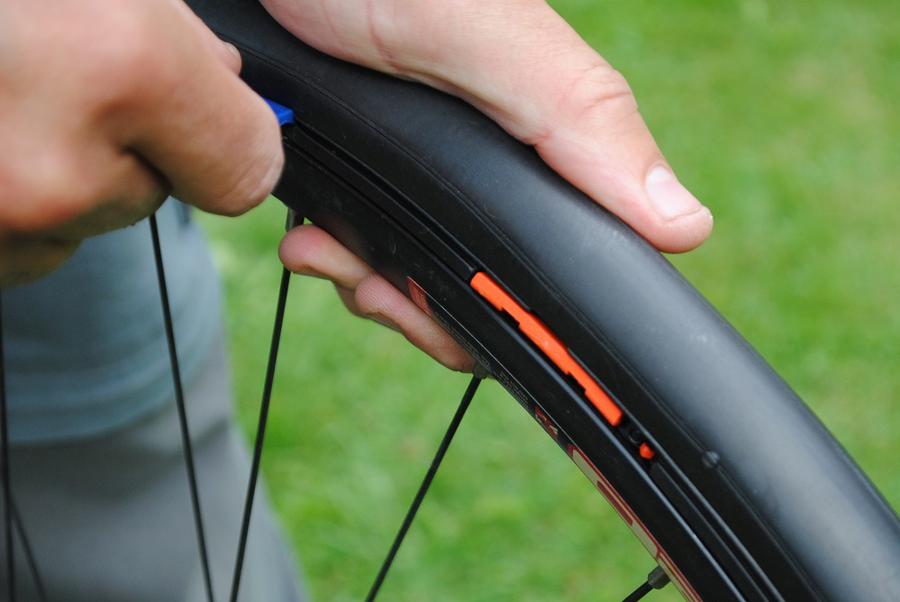 The orange clips shown here fit snugly under the rim and do a good job of securing the tire in place. They are pretty easy for the end-user to fit themselves.

Whilst the earlier tires came ready fitted to test bikes I fitted the latest 700 x 27 tire size to my own bike and found it fairly easy so riders can order online and fit at home.

Some UK bike schemes aimed at the public or workers have found Geckos invaluable; they have been used in the Rail2Ride project that looks to promote travel between train stations and Worcester University.  Sustainable Travel Solutions (STS) have been using them on the e-bikes they lease to the likes of National Health Service workers and the police, who use them for both work duties and commuting. 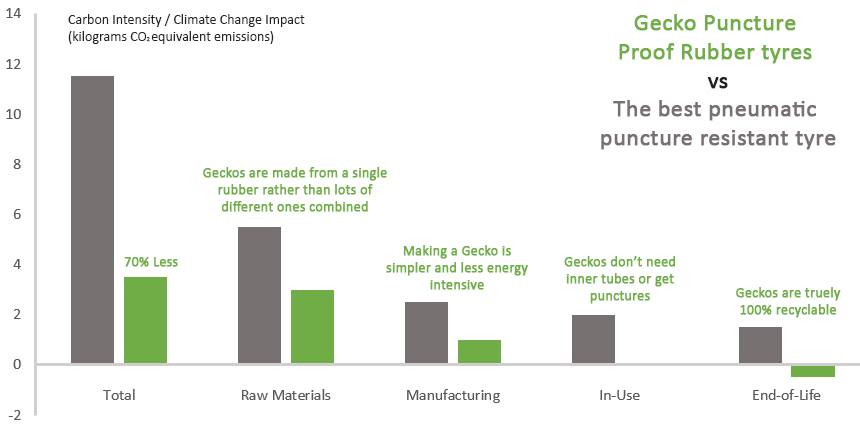 Gecko claim they are more sustainable option than other brands of puncture resistant and puncture proof tyres on several counts.

Gecko also say they have solid sustainable credentials as they are ‘70% less damaging to the environment than a leading puncture-resistant alternative’ adding ‘We believe our Gecko cellular rubber technology can successfully fill the gap between traditional pneumatic rubber material technology and the ‘foamed plastic’ solid tyre material technologies such as ethylene vinyl acetate (EVA) & polyurethane (PU).’

All in all, it looks like the puncture-proof tire really is coming of age.