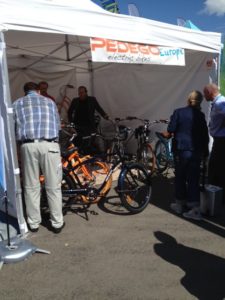 Electric bikes were very popular at the 2012 Eurobike!

This is a guest post from Don DiCostanzo, President of Pedego Electric Bikes.

Flying home from a fabulous week in Friedrichshafen, Germany, on the shores of Lake Constance, I thought I would share my perceptions about the show for those that did not attend.

Eurobike is THE world stage for anything related to bicycles.  For those who have never been, the show is gigantic, traffic and parking are a nightmare and the weather can be a problem, as it was this year.

The strangest thing about the entire show was the traffic and parking.  Cars and buses everywhere to get to and from but very few bicycles.  The worlds biggest bike show with over 47,000 visitors and I’d bet that far less than 1% arrived by bike.

We were among that very small group using bicycles because it simply made sense.  Our hotel was across the lake in a wonderful little town named Konstanz.

We would ride about a mile to a ferry, cross the lake and then ride about 4 miles to Messe, the show facility. We used show bikes to accomplish this and it worked great. I’m still at a loss to why so few did it this way but then, we of course, rode electric bikes.

Attendees pile in from all over the world.  The hours for exhibitors, as I discovered, are a brutal 8:30 am to 6 pm from Wednesday until Saturday. In my past two visits, I was observing and learning but this year, we were finally able to secure a space in the electric bike demonstration area which was outside.  Other than the off and on rainy periods, we were crazy busy almost every minute of the day.

There had to be 1,000 or more electric bikes on display here.  All shapes, sizes but typically either black or silver.  This year, the focus was on speed and performance.

A test track allowed just about anyone to take a spin on hundreds of different models although we had to limit rides on our bikes to dealer prospects.  For some reason, many competitors wanted to ride ours but were not there for that.  As it turns out, we were the only U.S. owned electric bike company exhibiting at Eurobike with electric production models on display.

It was absolutely amazing to witness the frenetic pace all over the show but those not electric bike or electric bike related did not seem to be anywhere near as busy.  Three days of dealer visitors followed by one day of public visitors on Saturday.  The show was nothing less than a big success for us in getting new dealers and further establishing our brand.  Feature articles in trade magazines about us helped as well.

After the first three days, we expected a slower pace on Saturday, but for us, Saturday was the busiest of all.  Consumers started to show up slowly but by 11 am, it was get in line to try our bikes.  We had not prepared to sell them but as it turns out, we sold all that we had that could be sold.  We referred a bunch more to our network of dealers.  We also had more dealers visit us on Saturday that missed us the previously 3 days.

I had to break away for some meetings with various industry folks and the mood was very upbeat everywhere I went.  We and our competitors are launching new products to captivate customers.  Some seem to be doing better than others but overall, the industry is on the upswing.  Distribution continues to be the limiting factor for the U.S. market but it’s getting better.

Interbike in Las Vegas later this month will tell us the real story.  While we had a small presence at Eurobike, Interbike will be a different story.

As I wrote this, sitting in the seat next to me, on a British Airways 747 up in the bubble, was a very attractive blonde who turned out to be Pamela Anderson.  Hopefully, she will be riding a Pedego soon!

If you have any questions for Don, please leave them in the comments section below.