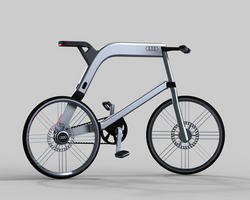 Hello E-Bikers! Here are some of the highlights in the e-bike news: Update: NY City effort to reclassify e-bikes as cars is shelved for now.  New concept bikes from Audi and Geoby.  An e-bike with an automatic transmission.  A new foldable e-bike coming from Portland Oregon.  And finally – more e-bikes on the roads bring more stories of drunken riding.

The battle in New York State over whether an e-bike is a bike or a car is stuck in neutral.  The current legislative session ended with no action.  While one measure proposes that any electric bike that travels at less than 20 mph should be considered a bike, at least one community board in New York City wants e-bikes classified as cars.  According to Bert Cebular at NYCeWheels in New York, the controversy stems from deliverymen who ride their e-bikes on sidewalks and against traffic, yet carry no insurance.

Word of two new concept e-bikes that could eventually be heading our way.   Ubergizmo and YankoDesign both reporting that designer Arash Karimi has created an Electric Bike Concept for luxury car maker Audi.  The minimalist designed bike uses a 550w – 750w motor housed in the rear wheel frame.  The lithium ion polymer battery will be housed in the frame, and will have its own charging plug.  It’s designed for a commute of about 15 miles with a 20mph electric throttle.Bike Europe is reporting that Chinese bicycle maker Geoby turned to former Accel Group designer Jorrit Schoonhoven and his partner at Creative Bikes to create what they call the back-bone concept.  Says Schoonhoven,  “In my vision the battery will become the center of the e-bike and not only the bicycle but everybody’s way of living. People get surrounded by a growing number of electronic appliances like the e-bike, but also laptops, mobile phones, i-pads, GPS etcetera. Why should we use a separate battery for each of these appliances? It is better to have one power source you can use for all your personal electronic devices.”  His premise is that future batteries will be lighter weight and can be charged while riding the bike without generating too much resistance.  The new design was unveiled at China Cycle in Shanghai.

And how about an automatic transmission for an e-bike? EV World is reporting that bike component maker JD Group announced a new automatic gear shifting system that allows the rider to conveniently control gear selection, while enabling more efficient use of power.  The system will enable TrnzXPST powered e-bikes to have peak electric support at all times.  Details are being unveiled at EuroBike 2011 for introduction in 2012 models.  The Winora Group will be the first to launch e-bike models equipped with JD’s AGT technology.   These fully automatic TranzX PST powered e-bikes will be available to dealers for 2012 under the Winora Comfort Series or under the Hercules Touring Series. 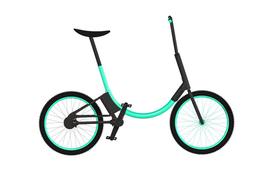 The Conscious Commuter bike is compact, electric and portable.

It looks like that Mecca for e-biking, Portland, Oregon, will soon have another e-bike offering.  “Sustainable Business Oregon” reports that Conscious Commuter expects to start building folding electric bikes for sale around the world next year.  The premise of the recycled aluminum frame bike is that the vehicle might entice commuters out of their cars.  The bike is intended to be light enough and portable enough to provide the first and last mile link to a public transportation system.

And finally, as more people around the world take to e-bikes, we’re seeing more stories about drunken e-biking.  But this one from England’s Manchester Evening News struck us as unusual.  In England, motorized bikes are not covered by what they call drink-driving laws since they do not require either a license or insurance.  So when 23 year old Anthony Dancer was pulled over on his Fun Nine Electric scooter twice in one month, they couldn’t charge him under motor vehicle laws.  Instead they convicted him under an 1872 Victorian era statute pertaining to the drunken operation of a carriage.  Magistrates fined him about $600. The 1872 Licensing Act was originally brought in to crack down on anyone caught drunk in charge of a carriage, steam engine, a horse or a cow.